The future of Australia’s workforce has been revealed in a major parliamentary inquiry – and it’s bad news for professionals.

A report from the Inquiry Future of Work and Workers committee released on Wednesday has revealed thousands of Australians could be out of a job very soon.

Chairman Senator Murray Watt told news.com.au there’s no doubt automation will change industry but there are some jobs that will be completely wiped out by robots – and some of them might surprise you.

Senator Watt said many jobs that involve manual, routine tasks, such as bank tellers, and data entry work are at a risk of being wiped out but even jobs requiring higher order skills won’t be immune.

‘From my own personal experience having been a lawyer, a lot of the reviewing of documents that junior lawyers have traditionally done is now being automated,’ he said.

Atlassian co-founder Mike Cannon-Brookes, one of Australia’s most successful technologists, told the inquiry it’s likely that the driving industry will be affected.

He said jobs such as taxi or Uber drivers, as well as truck drivers will probably be deemed unnecessary and wiped out by automation in the coming years.

‘The pace of change is increasing and the countries that manage this change and get out ahead of it will be the real winners, Senator Watt said. 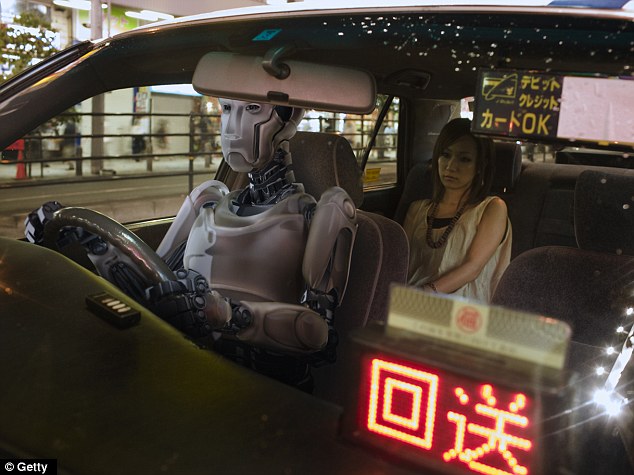 Jobs such as taxi or Uber drivers, as well as truck drivers will probably be deemed unnecessary and wiped out by automation in the coming years (stock image)

The committee met with industry leaders to discuss the impact of emerging technologies in relation to work earnings, job security and future employment.

One of the key findings in the report was how automation, robotics, artificial intelligence and 3D printing are continuing to disrupt the jobs that people do.

The threat of automation completely ‘wiping out’ the need for some jobs was a genuine concern of many industry leaders who spoke to the committee.

While some jobs are destined to become obsolete by emerging technologies, new industries will arise as a result – especially in the IT and data fields. Among the jobs in the firing line are bank workers and driving roles, such as taxis and Uber drivers (stock image)

The report identified that the so-called ‘soft skills’, which distinguish humans from robots, will for the time being remain in demand.

Concepts such as emotional intelligence, creativity and critical thinking are difficult to be replaced by a computer algorithm, he said.

‘A lot of the jobs growth in Australia in recent years has already been in the caring professions like health, disability services, aged care — they’re not the sort of jobs that will be taken by robots anytime soon.’

Senator Watt said while there’s no doubt lots of things are changing in the Australian workplace, the future is still in our hands.