The Latest: Taxpayers get 1-day extension due to IRS…

WASHINGTON (AP) – The Latest on the outage of the IRS payment website (all times local):

The IRS is giving all taxpayers an extra day to file after its website went down on deadline day.

The agency announced that individuals and businesses with a filing or payment that was due Tuesday now have until midnight Wednesday.

It said no additional paperwork is needed to get the extension.

The agency’s website for making payments and gaining access to other key services crashed amid the filing flood. The website appeared to be back to normal late Tuesday.

Treasury Secretary Steve Mnuchin says Americans who have been unable to pay their taxes Tuesday because the IRS payment website is down will receive an extension when the site is working again.

The website has been down most of the day and wasn’t operational as of 4:30 p.m. EDT.

Mnuchin commented on the outage when asked by reporters after an event in Derry, New Hampshire, where he promoted the Trump tax overhaul along with Ivanka Trump.

Mnuchin described the problem as a “high-volume technical issue” that the IRS is attempting to resolve.

The IRS website where people can pay their taxes and access other key services has been down for most the day, frustrating last-minute tax filers.

A message on the website about the outage indicates the agency still expects Americans to pay their taxes on time.

The IRS did not give an immediate explanation for the failure but said in a statement that “certain IRS systems are experiencing technical difficulties.”

The agency also said that taxpayers should filing their tax returns as they normally would. The problem is, electronic filing is the most popular way to file. 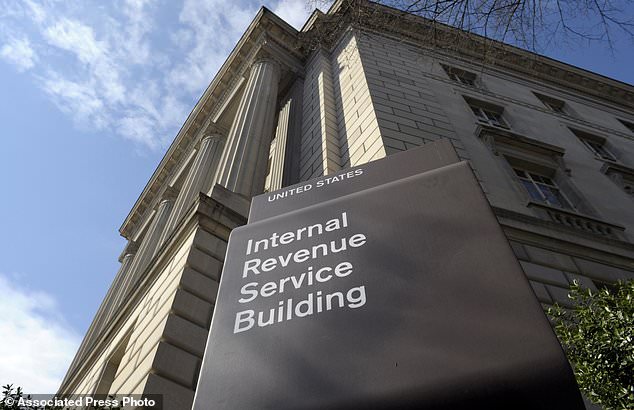 FILE – In this photo March 22, 2013 file photo, the exterior of the Internal Revenue Service (IRS) building in Washington. The IRS website to make payments went down on Tuesday, April 17, 2018. The IRS did not have an immediate explanation for the failure. But it said on its website that its online payment system became unavailable at 2:50 A.M. ET on Tuesday.(AP Photo/Susan Walsh, File) 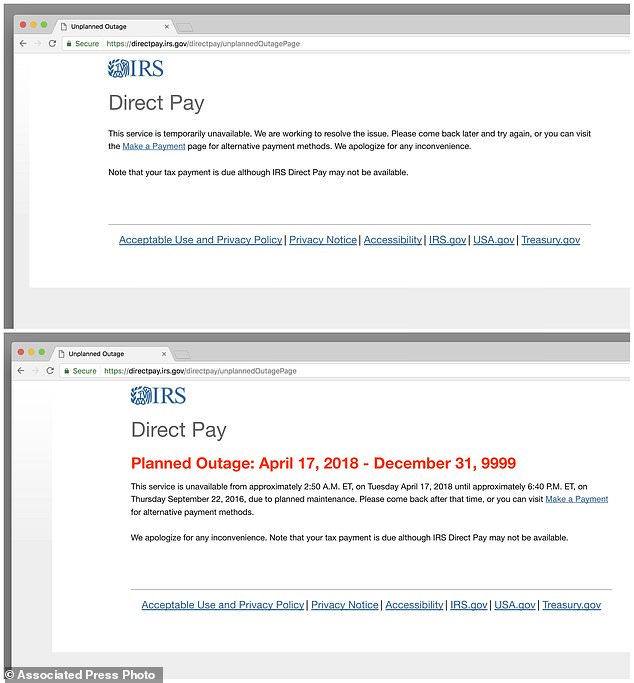 This combo of images shows messages that were displayed on the Direct Pay section of the IRS website on Tuesday, April 17, 2018. At bottom is the initial message about the outage and at top is the updated message. The IRS said on its website that its online payment system became unavailable at 2:50 A.M. ET on Tuesday. The IRS did not have an immediate explanation for the failure. (IRS via AP) 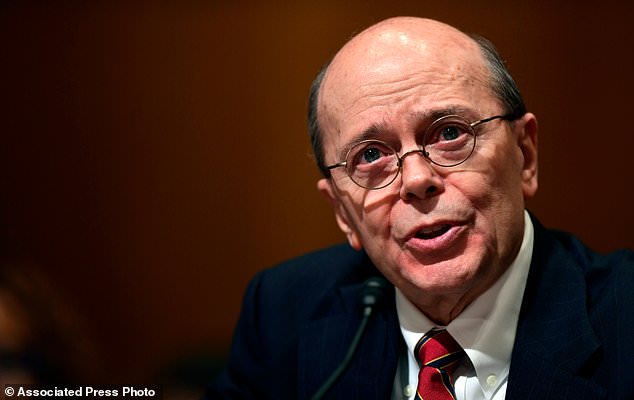 FILE- In this Feb. 14, 2018, file photo, Internal Revenue Service Acting Commissioner David Kautter testifies before the Senate Finance Committee on Capitol Hill in Washington on President Donald Trump’s fiscal year 2019 budget proposal. The IRS website to make payments went down on Tuesday, April 17, 2018. Kautter testified during a House Oversight Hearing Tuesday that a number of systems are down at the moment and that they are working to resolve the issue. (AP Photo/Susan Walsh, File)