The lion kipping: Big cats cuddle up as puppies, polar bears and other animals enjoy a nice nap

The lion kipping: Big cats cuddle up as puppies, polar bears and other animals enjoy a nice nap wherever they like in heart-warming selection of photos

A heartwarming gallery of lazing lions, slumbering seals, dozy dogs and groggy gorillas shows the most majestic, fearsome and cuddly animals love nothing better than snooze.

Tiny kittens, as well as big leopards and lions, all enjoy taking time out in trees, while otters are able to drift away out on the water and polar bears can get cosy on the frigid ice.

In one photograph, taken on a sunny day at Lisbon Zoo, Portugal, a male lion lies with his arm over a lioness as they get some shut eye on the warmth of their stony enclosure.

While in Uganda, a gorilla sleeps on his belly on the jungle floor with his bulky head resting in the palm of his hand.

The album also reveals how nature’s rivals, cats and dogs, become placid companions when they go to the land of nod, with a beagle totally at ease with two kittens fast asleep either side of him.

On a warm, sunny day at Lisbon Zoo in Portugal a male lion lies with his arm over a lioness as they get some shut eye on the warmth of their stony enclosure. Lions tend to hunt nocturnally so most of their sleep is during the day, although lions in zoos sleep around five hours less than those who live in the wild 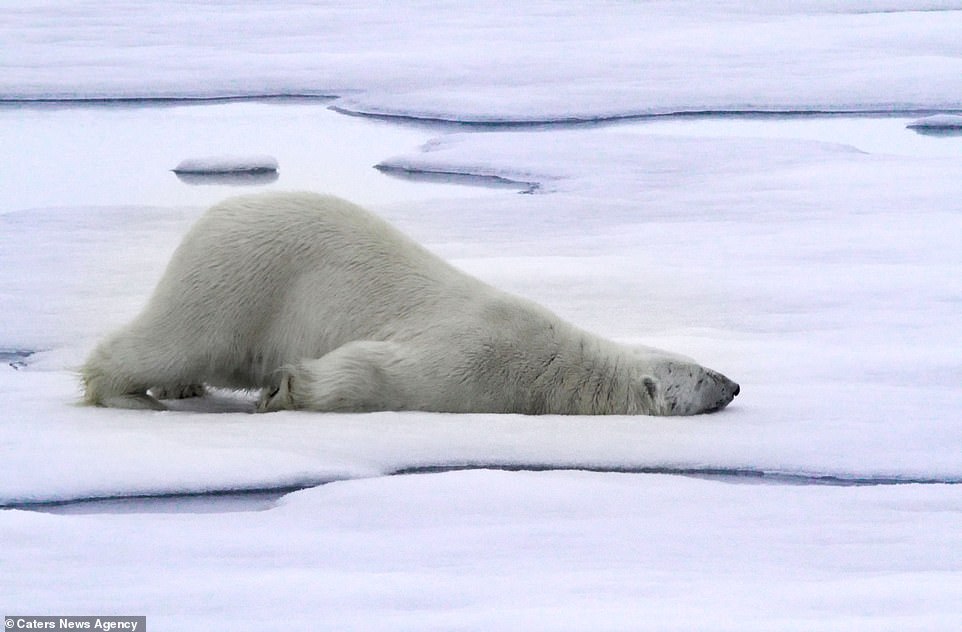 A polar bear fast asleep on the sea ice. Much like us the majestic bears will sleep for around seven to eight hours each day, but because the light in the Arctic warps day and night, they sleep whenever it takes their fancy 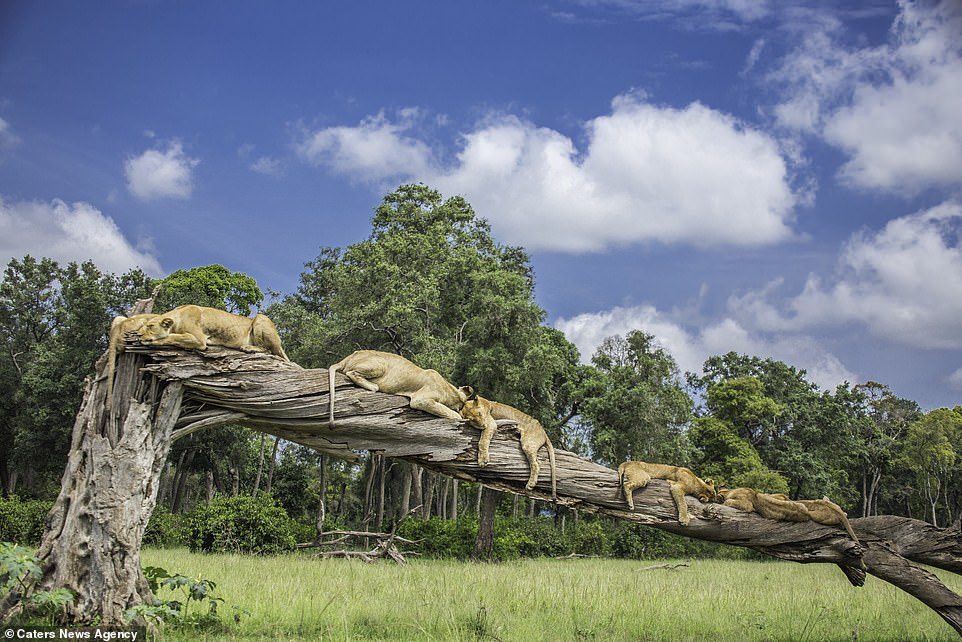 Lions snoozing on a broken tree trunk. Male lions spend an incredible 18 to 20 hours a day snoozing, while lionesses slumber for around 15 to 18 hours 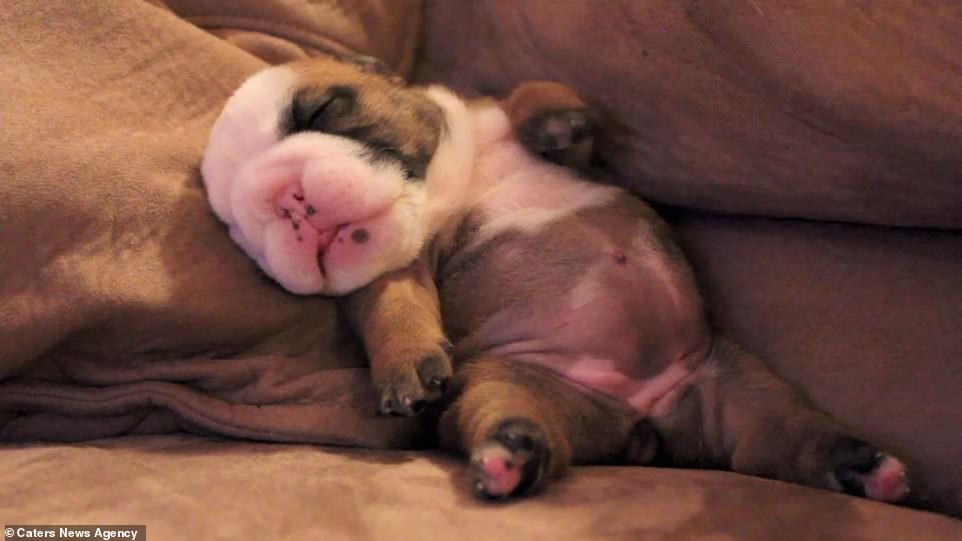 An adorable sleeping bulldog puppy, all dog owners will know that puppies sleep pretty much all day (18 to 20 hours) when they are this young as they expend so much energy learning about the world 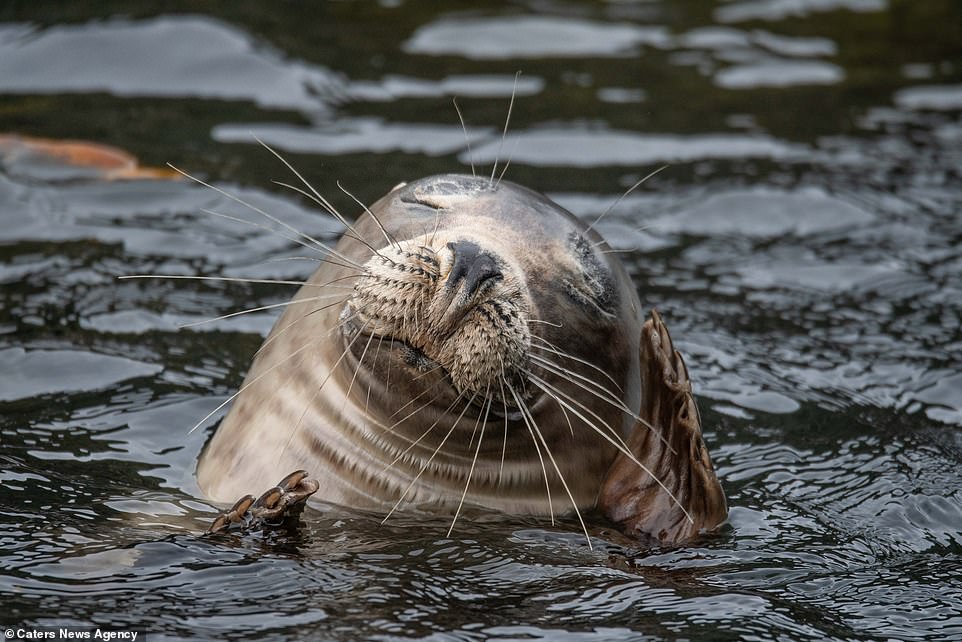 A slumbering seal gets some shut eye in the water. When seals sleep in the water they do so in a position known as ‘bottling’, this is where their body, except for their head is submerged. They sleep with just half their brain, while the other half remains alert to any potential dangers 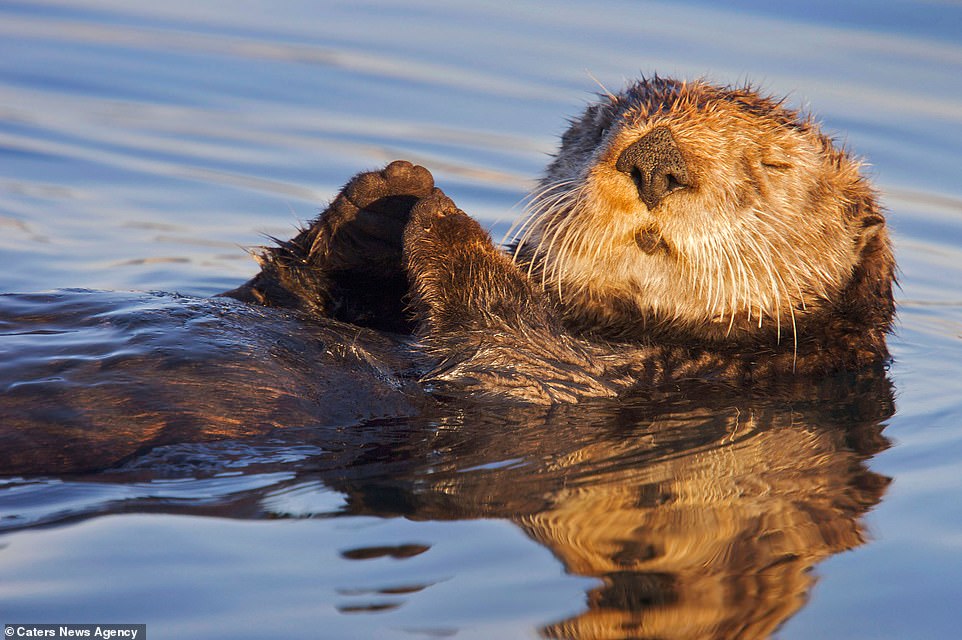 An otter sleeps as he slips through the water, resting both of his hands above his chest. The glorious posture of serenity is common among sea otters and helps them to balance while drifting in the land of nod. Sea otters also hold hands when sleeping alongside each other to keep from moving apart in the water 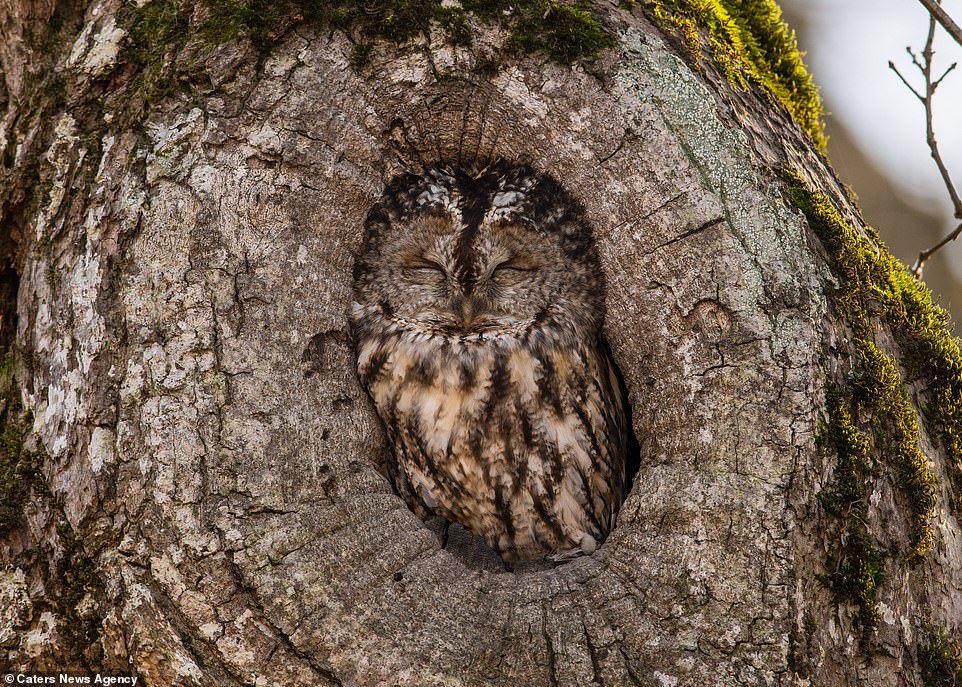 A tanny owl sleeping inside a snug tree hollow in Kersberga, Sweden. Owls sleep during the day to conserve their energy for hunting at night. The older they get the less time they are able to spend in REM sleep – rapid eye movement sleep – common among all mammals and birds during which the sleeper experiences vivid dreams 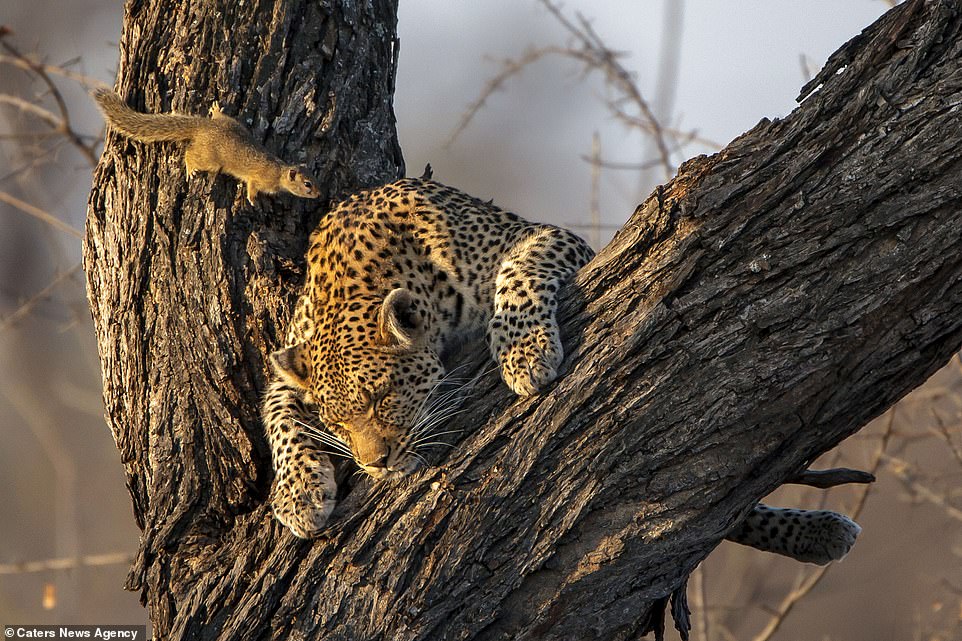 A bold squirrel investigates a leopard out for the count on a convenient y-branch of a tree. The nocturnal creatures spend much of their day sleeping to conserve energy for long nights of hunting. Taking time out in trees helps them to avoid attack from other animals 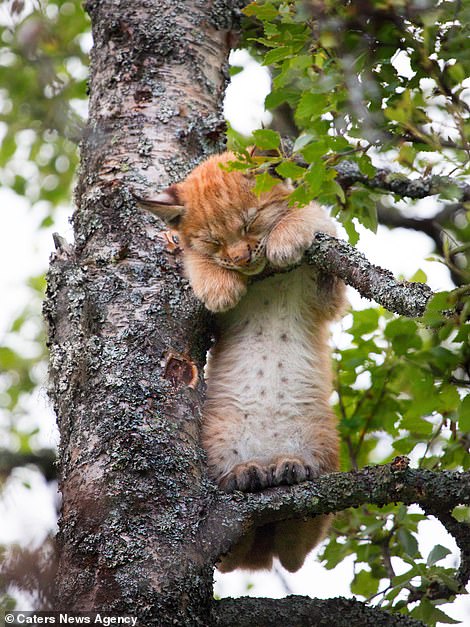 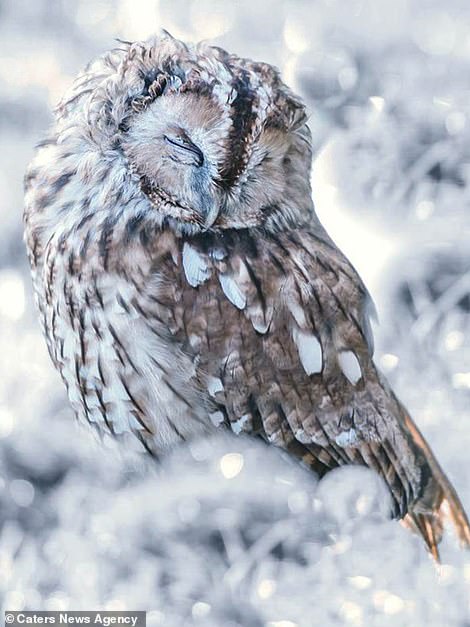 A lynx kitten sleeping up a tree in a novel position, with its arms slung over one branch and its feet resting on another below (left) and an owl sleeping in snowy forest (right) 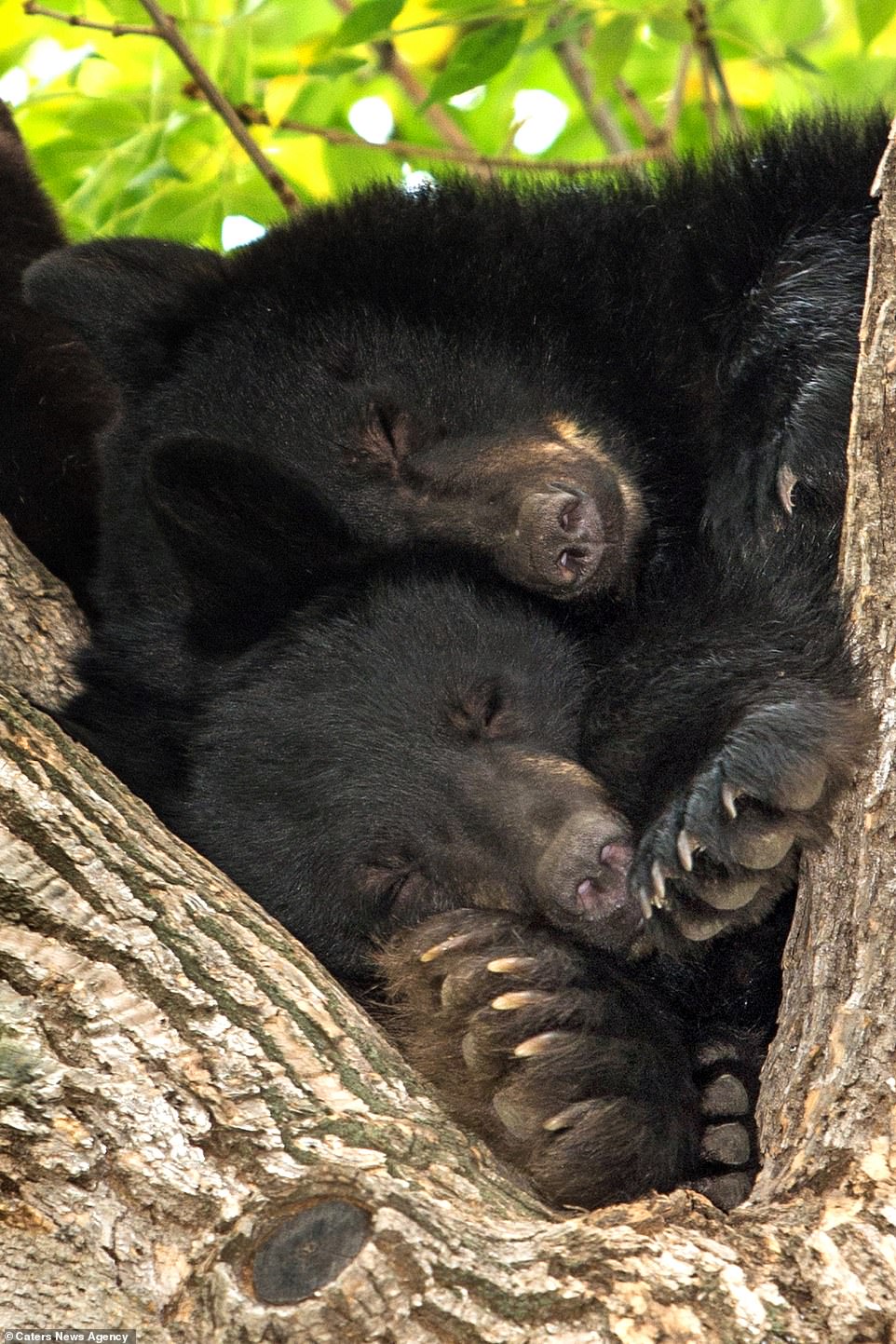 Black bears cuddling as they sleep inside a tree. During the winter months black bears will hibernate for around seven months to escape the cold, during which time they don’t eat or drink and use the energy they have stored up as their metabolism slows down 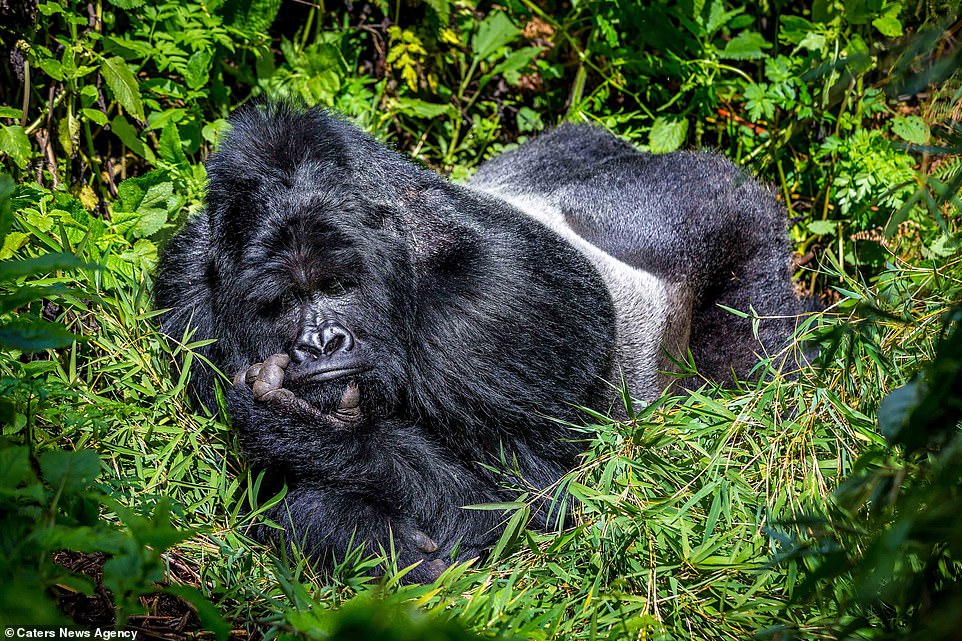 A sleeping gorilla at Mgahinga Gorilla National Park in southwestern Uganda. Gorillas, which make their beds on the floor of the jungle unlike many other primates, sleep for around 12 hours each day 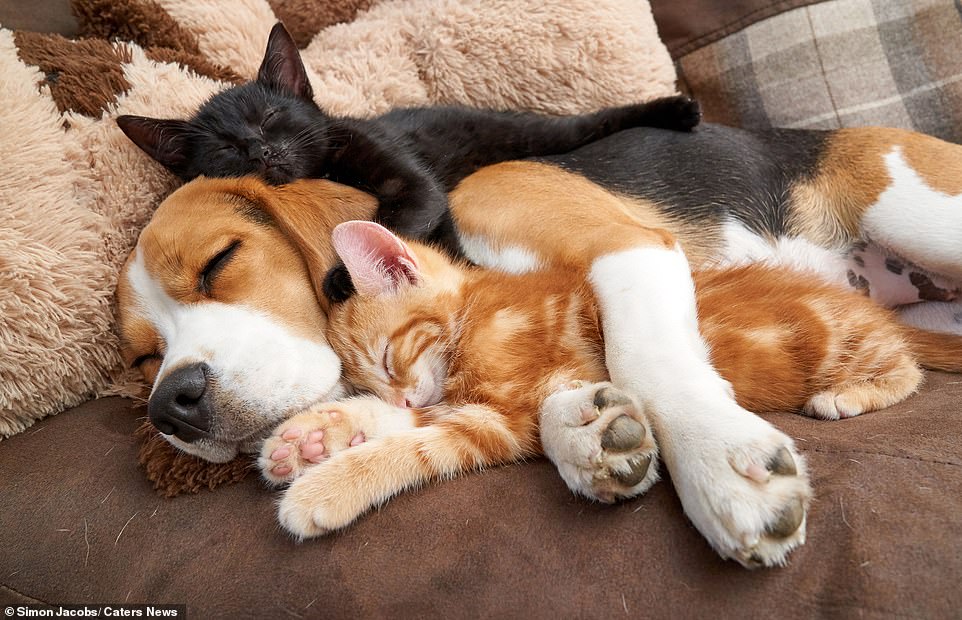 Dexter the beagle enjoying a cosy nap between two kittens at home in Staplehurst, England. Most dogs sleep for around 12 to 14 hours every day, while cats doze off for 12 to 16 hours per day