The magic of swimming alongside the world’s largest fish, the whale shark, in the Maldives

Looming out of the turquoise blue a whale shark measuring around 26 feet long silently swam towards me.

I wasn’t sure how I would feel meeting the world’s largest fish – especially growing up with a fear of the sea – but I felt completely at ease as the gentle giant glided alongside me with its spotted skin shimmering in the sun.

Earlier that day I’d asked Richard Somerset, a territory director for the diver training organisation Padi, to sum up the whale shark in three words, and I could now see how his reply – ‘big, mysterious and beautiful’ – fits the bill perfectly. 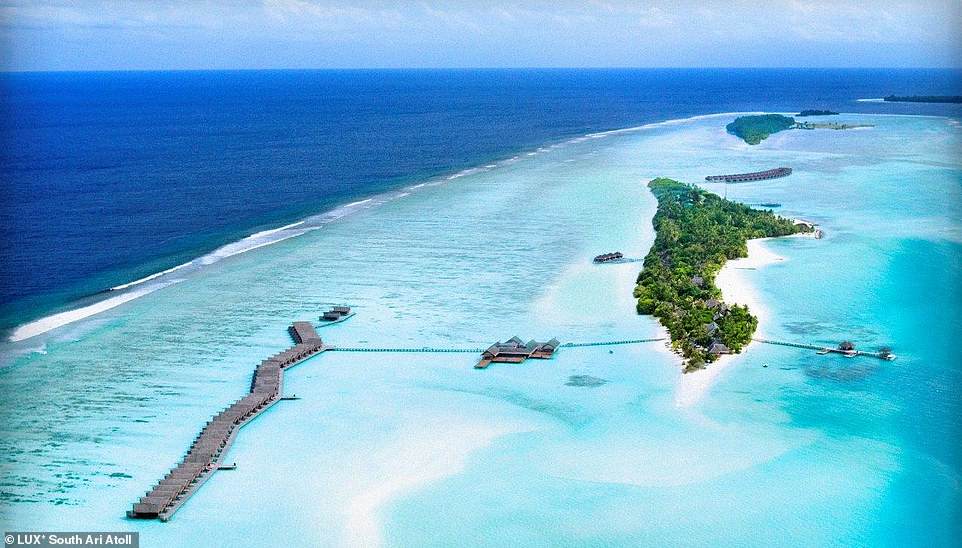 Sadie’s home during the watery festival – the Lux South Ari Atoll resort. Whale sharks are seen in the waters here all year round

I was diving with Somerset and a crew from Padi, including the firm’s CEO, Dr Drew Richardson, during an underwater festival in the Maldives, which has been running for the past ten years out at the luxury Lux resort on the southern island of Dhidhoofinolhu. This year it was run in collaboration with Padi.

During the week-long event, I’d learned how little we know about the whale shark and how the species is currently listed as ‘endangered’ by the International Union for Conservation of Nature (Icun), due to human threat.

Abdul Basith Mohamed, a project co-ordinator at the Maldives Whale Shark Research Programme, told us how 54 per cent of whale sharks sport human-related injuries with many of them hit by fishing boats or by tourist vessels.

In some parts of the world, the large fish – which can grow up to 40 feet long – is also illegally hunted for its meat with the fins sold to restaurants in Asia for highly prized shark fin soup. 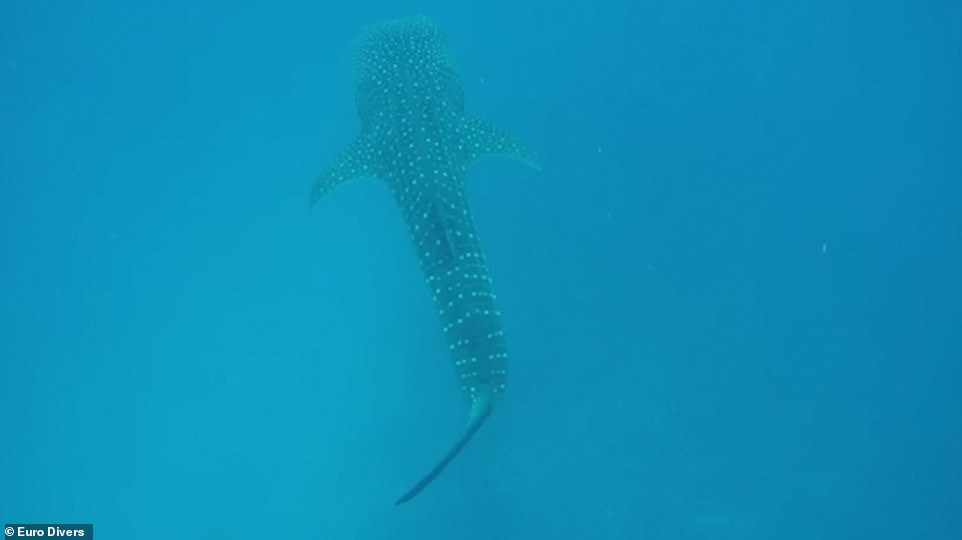 The whale shark is currently listed as ‘endangered’ by the International Union for Conservation of Nature. They are sometimes injured by boats and many are illegally hunted. This is the whale shark that Sadie encountered 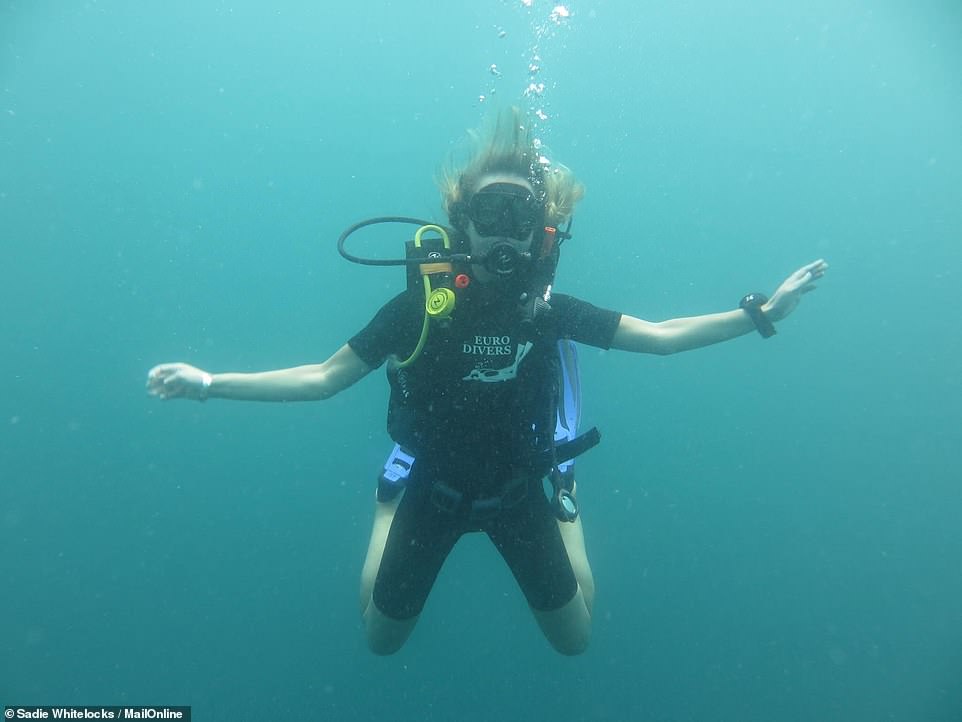 Sea-ing the sights: Sadie during one of the excursions during the underwater festival 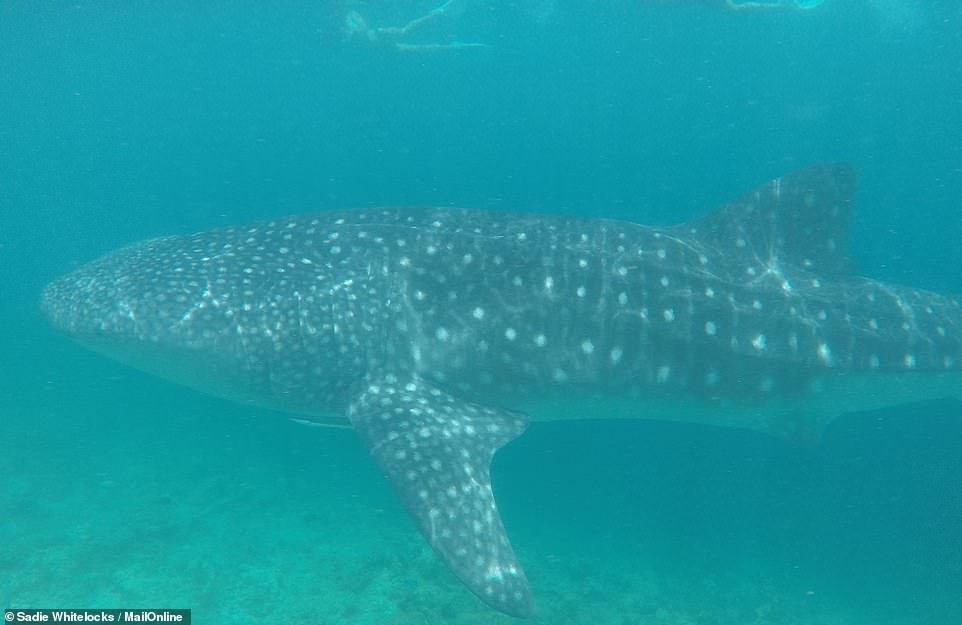 Whale shark tourism is booming in the Maldives. Above, a diver next to the whale shark Sadie spotted

In the past, the oil from the liver was used to waterproof boats and it was sold to shoe polish manufacturers.

Now, thanks to organisations such as Padi and the Maldives Whale Shark Research Programme, efforts are being made to save the whale shark from extinction and enforce restrictions around tourism.

On the day I swam with the whale shark, there were ten of us snorkelling in the water but marine scientist Clara Cánovas Pérez told me that sometimes there can be up to 200 swimmers in one spot, all clamouring to see one of the planet’s most fascinating and elusive creatures.

Whale shark tourism is booming in the Maldives and the Lux South Ari Atoll resort is located in prime whale shark territory with sightings of young males occurring all year round.

Apparently in 2013, whale shark tourism attracted around 76,000 visitors over a 12-month period in this area alone and brought in $4million (£3million). 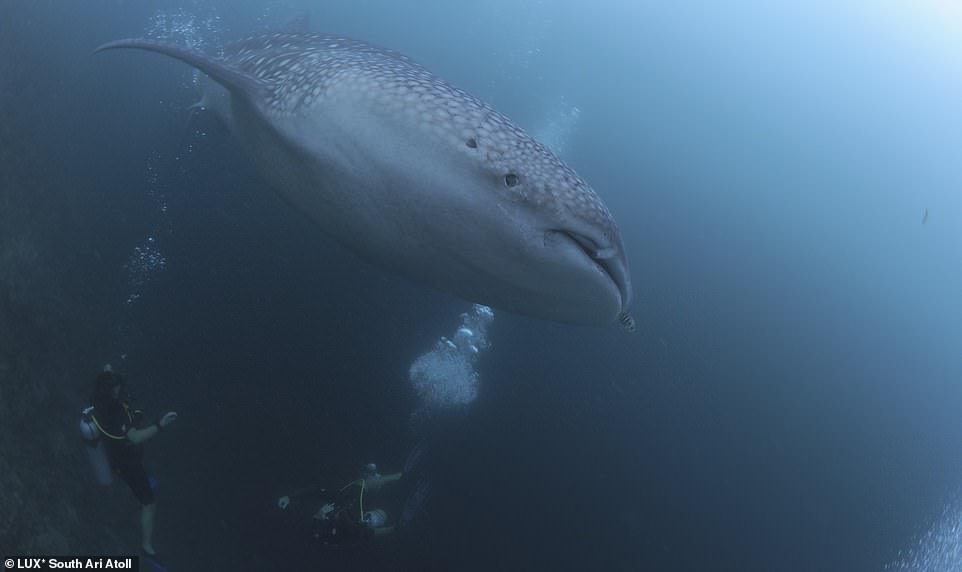 Divers are dwarfed by a giant whale shark as it swims above them in the turquoise waters. This image was taken during Sadie’s trip 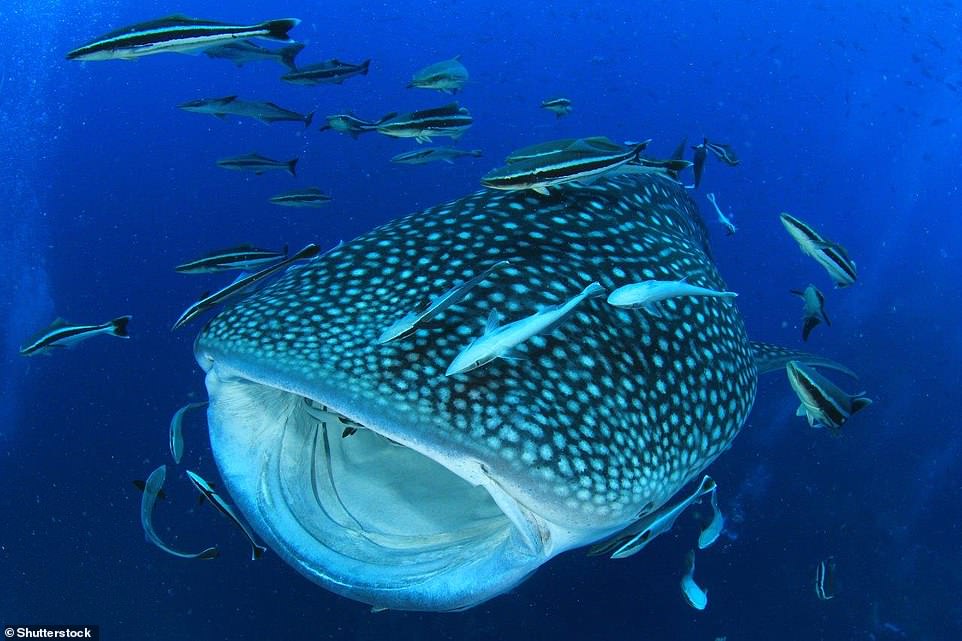 Mexico, Belize, the Galapagos Islands and Indonesia are other spots where whale sharks are frequently encountered (stock image) 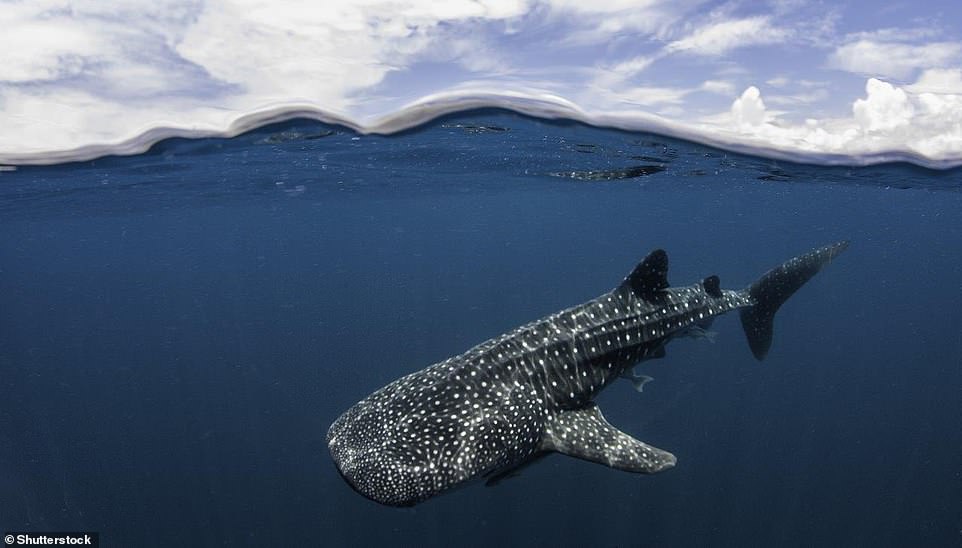 Mexico, Belize, the Galapagos Islands and Indonesia are other locations where whale sharks are frequently encountered.

Many people in the Maldives are now lobbying for a limit on the number of tourist boats out in an area at any one time.

The South Ari atoll was listed as a Marine Protected Area (MPA) in 2009, encompassing a coral reef habitat of 42 square kilometres (16 square miles) but regulating the number of tourists appears to be a difficult task.

The day we ventured out to track whale sharks on the coast, I spotted more than a dozen boats bobbing around, with speedboats zipping around larger liveaboards.

‘It’s not a good experience for the whale shark or the tourists when there are too many people out there,’ Dr Richardson told me later that day over dinner.

‘There’s been footage captured of some people riding the whale sharks and grabbing their dorsal fins. It’s pretty horrific!’

Whale sharks are frequently seen close to the water’s surface as they come up from the deep to regulate their body temperature so they’re easy prey for tourists.

They might have 3,000 tiny teeth, but these giant creatures aren’t up for a fight and they prefer feeding on plankton and small fish rather than nipping back at pesky humans.

‘Big, mysterious and beautiful’ are definitely words I would use to describe the whale shark, with ‘defenceless’ being an adjective I would add to the mix.

It’s an incredible experience seeing these creatures up close but as the scientists I spoke to point out, treating them with respect and giving them room to breathe makes these underwater encounters all the more magical.

MailOnline Travel attended the week-long Underwater Festival, held on the islet of Dhidhoofinolhu at LUX* South Ari Atoll. Stays at the luxury resort start from around £380 per night with half board, full board and all inclusive packages available.

Holidaymakers can complete their Padi diving certification at LUX* South Ari Atoll all year round via Euro Divers with equipment hire available.

Flights from London to Male, the capital of the Maldives, run direct with British Airways between November and March with seaplane transfers to LUX* South Ari Atoll via Trans Maldivian Airways.