The magnetic field surrounding the supermassive black hole at the centre of our galaxy is channelling gas particles into orbit around the hole, rather than into it.

The finding solves the mystery of why the Milky Way’s black hole is quieter than those at the heart of other galaxies, which emit radiation as they devour matter.

NASA experts mapped out the field using a far-infrared light detector, mounted on a flying telescope, to detect the movements of interstellar dust around the hole.

The magnetic field surrounding the supermassive black hole at the centre of our galaxy (pictured) is channelling gas particles into orbit around the hole, rather than into it

Like many galaxies, our Milky Way harbours a supermassive black hole at its centre, one which researchers have dubbed Sagittarius A*.

Most galaxies’ supermassive black holes are active, with vast amounts of material falling into them and causing them to emit high-energy radiation in the process — oddly, however, the one at the heart of the Milky Way is relatively quiet.

Investigating this phenomenon, NASA researchers found that the magnetic field around Sagittarius A* channels surrounding gas into orbit around the black hole, rather than directly into it, keeping the hole from ‘feeding’.

‘The spiral shape of the magnetic field channels the gas into an orbit around the black hole,’ said lead study author and astrophysicist Darren Dowell, of NASA’s Jet Propulsion Laboratory in Pasadena, California.

‘This could explain why our black hole is quiet while others are active,’ he added.

Invisible but capable influencing the motions of charged particles, magnetic fields have significant effects on how matter moves and evolves across the universe.

However, the fact that they cannot be imaged directly means that their exact role is not well understood.

To map out the shape and strength of these forces, researchers had therefore to study their effects on grains of dust, floating around in space, which align themselves perpendicular to the magnetic fields. 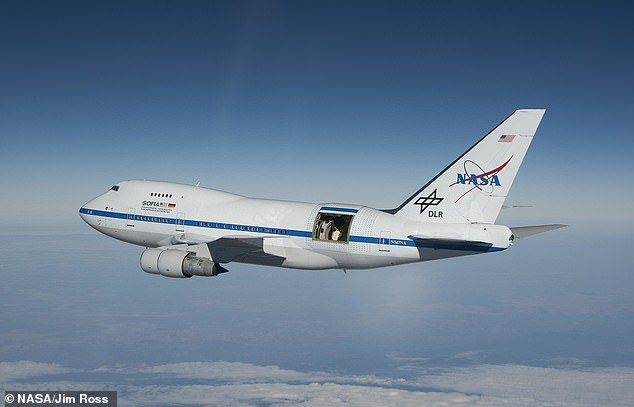 The magnetic field around Sagittarius A* was made using a telescope which is carried up into the Earth’s atmosphere — and its signal-damping effects — by a special aeroplane (pictured, with the telescope visible through the open door in the plane’s rear fuselage)

SOFIA is a modified Boeing 747 aircraft, operated by NASA and the German Aerospace Centre, that carries a reflecting telescope.

The research craft flies above the majority of the water vapour in the atmosphere, the presence of which blocks some infrared signals from reaching the ground. 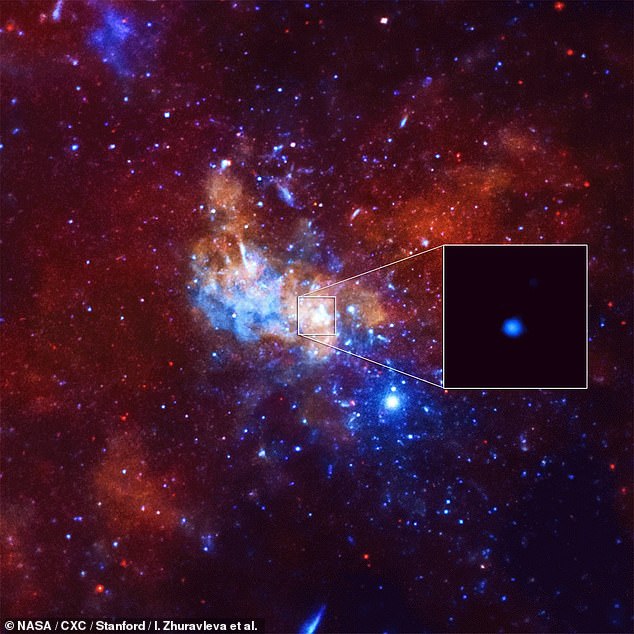 The finding solves the mystery of why the Milky Way’s black hole, Sagittarius A*, is quieter than those at the heart of other galaxies, which emit radiation as they devour matter. Pictured, the centre of the Milky Way, highlighting an X-ray flare (inset) detected coming from Sagittarius A*

‘This is one of the first instances where we can really see how magnetic fields and interstellar matter interact with each other,’ said paper co-author Joan Schmelz, who is an astrophysicist at NASA Ames Research Center in California’s Silicon Valley.

‘HAWC+ is a game-changer,’ she added.

The full findings of the study were presented at the American Astronomical Society annual meeting in June, 2019 and will be submitted for publication in the Astrophysical Journal.

WHAT IS THE SUPERMASSIVE BLACK HOLE SAGITTARIUS A*

The Galactic centre of the Milky Way is dominated by one resident, the supermassive black hole known as Sagittarius A* (Sgr A*).