Davina McCall said two of the performers on The Masked Singer UK made her cry, as the competition returns next year.

The programme sees 12 celebrity acts sing while disguised in extravagant and outrageous costumes, as a star panel tries to guess their identities.

The previous series saw pop star Natalie Imbruglia, as Panda, crowned the winner, while former England footballer Michael Owen was found to be Doughnuts, and singer Charlotte Church was revealed as Mushroom.

When asked if any of the performances have made her cry, Davina said: ‘Absolutely – Jellyfish is an extraordinary performer and has made us all feel pretty emotional. 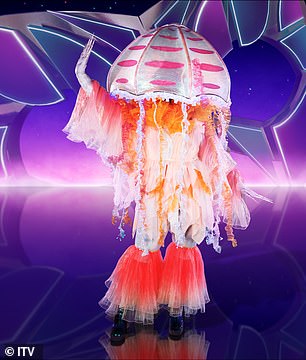 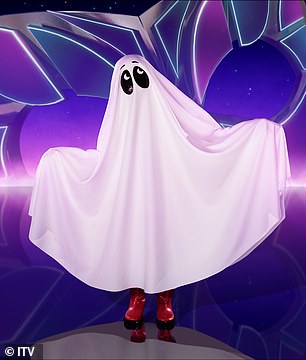 Born to perform: The programme sees 12 celebrity acts sing while disguised in extravagant and outrageous costumes, as a star panel tries to guess their identities (Jellyfish, left, and Ghost, right, picture) 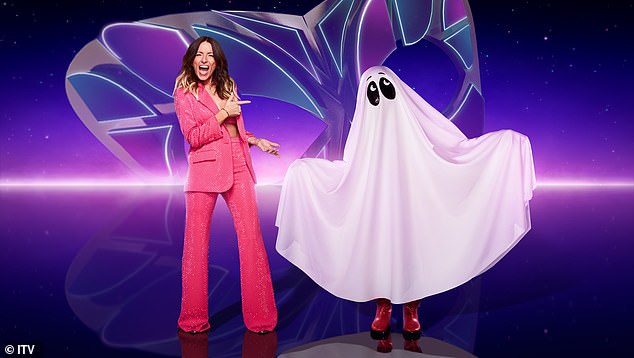 Television magic: When asked if any of the performances have made her cry, Davina said: ‘Absolutely’

‘Rhino, as well, has been particularly emotive. There are people who completely draw you in.’

She added that the celebrity playing Rhino is ‘massive and quite humble’ and puts his ‘little hooves together’ in a sweet movement. 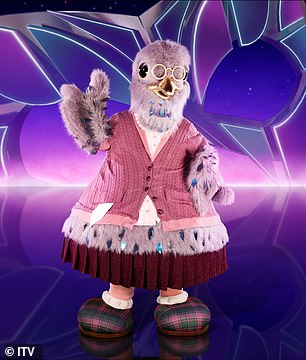 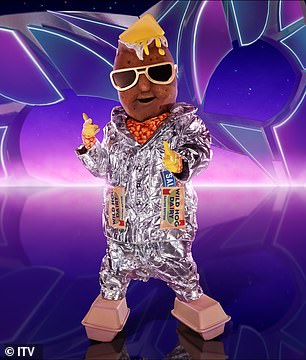 Set to take to the stage: The yet-to-be-unveiled celebrity contestants will wear costumes such as Pigeon (left) and Potato (right) 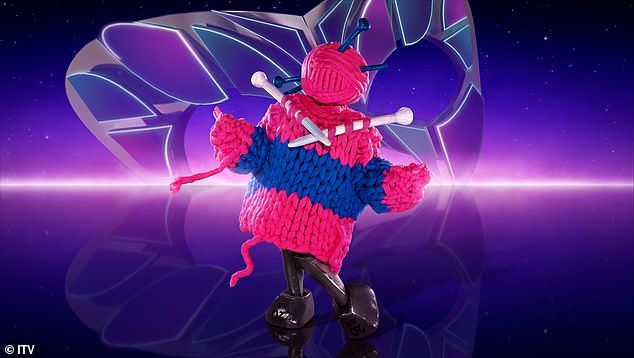 All wrapped up: Knitting is seen, with the pink and blue costume featuring white needles across the front 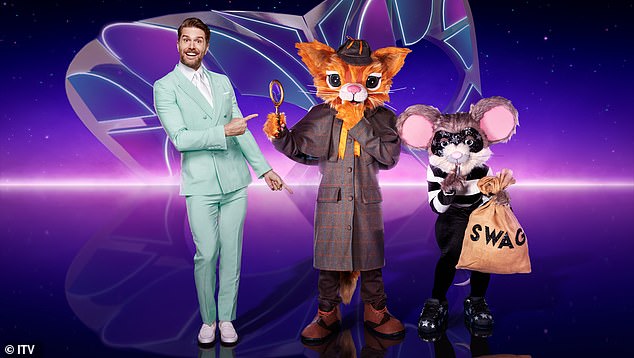 All stars: Host Joel Dommett looks stylish in a mint green suit as he poses with Cat & Mouse ahead of the 2023 series

Jonathan said: ‘I’ll tell you what I really like about it, and I know Davina feels the same way, is to be doing something when you look out at the audience and you see it’s mums, dads, grannies and grandpas with their kids.’

Rita was asked if she felt the celebrities had upped their game this time around, and said: ‘I think now they’ve seen the show they’re like, “What can I do that hasn’t been done before, and how far can I take it?”. They are going further than ever before.’

Mo said: ‘I feel people are really coming into their costumes more this series. 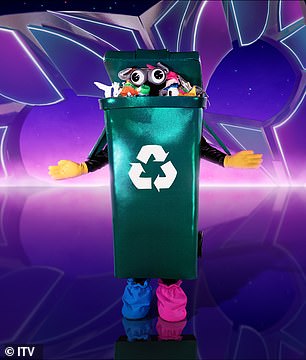 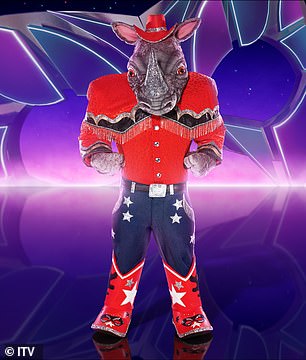 Competitors: Two celebrities will wear the costumes named Rubbish (left) and Rhino (right) when the new season starts next month 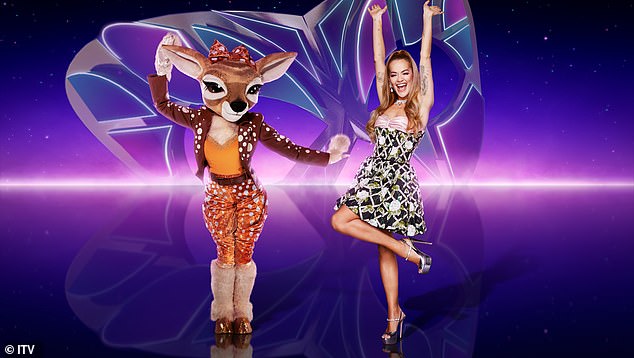 Star quality: Panellist Rita Ora was in good spirits as she posed alongside Fawn ahead of the new series

‘So Phoenix always looks at us a bit weirdly for example. Then you’ve got some characters who are really funny, which is also hard because you think – is this a comedian that I know?’

It comes after Davina revealed she was initially asked to appear as a contestant on The Masked Singer UK rather than on the judging panel.

During a recent appearance at Good Housekeeping Live, she said: ‘I’ve got a really good story to tell about The Masked Singer. I had lunch with the head of ITV and I was 52 or 53, I’ve known him forever, and he asked: ”Can you sing Davina?” and I said: ”Sort of.. in the shower Why?’ 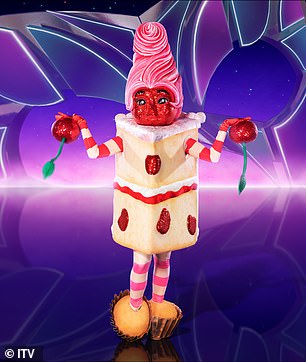 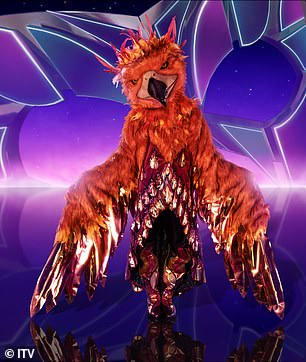 Playing dress up: Piece of Cake (left) and Phoenix (right) will be two of the costumes worn by celebrities during the competition 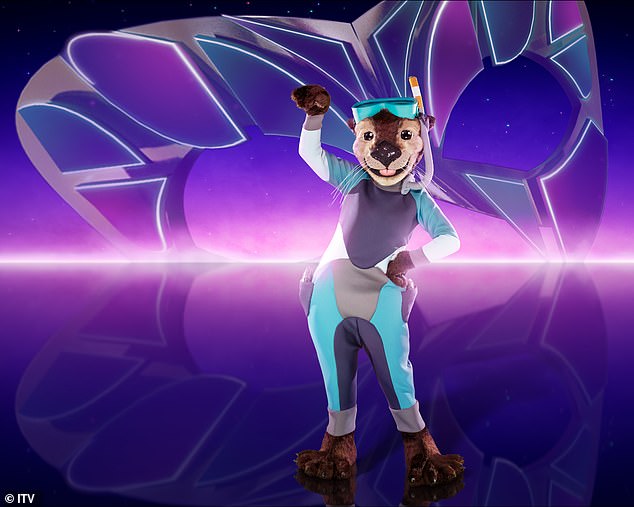 Entertainer: Otter is seen wearing a pair of goggles and a snorkle ahead of the new run of the programme

‘He brought up being a contestant on the show, and I said: ”What are you talking about? I shouldn’t be on it, I should present it!” He told me they already had a presenter for the show – Joel Dommett – who is amazing, so I said: ”Can I be on the panel then?” A week later, I got a call to be on the panel.

‘Every week, when I’m on The Masked Singer, you just know you’re looking at the most grateful person. Not because I’m on telly, but because I know it’s an opportunity to do a form of telly that I love so much. If you don’t try, you don’t get!’

The Masked Singer starts on 1st January at 6.30pm ITV1 and ITVX. 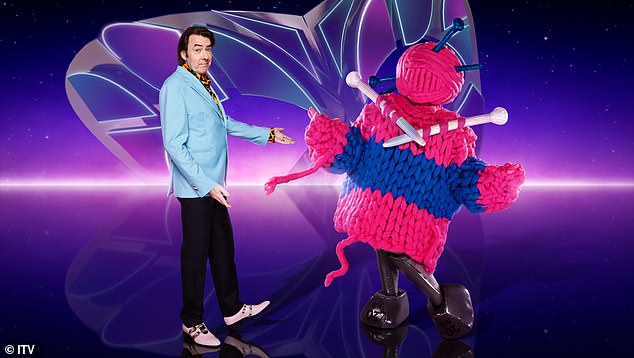