English National Opera’s new The Merry Widow looks good and must have cost a packet. But it’s musically merely adequate, the new libretto and lyrics are all too often crude and coarse-grained, and the production is heavy-handed.

Franz Lehár’s fin- de-siècle masterpiece thrives on sophistication. Much of this is as sophisticated as a stag do in Prague, rather than a grand dinner in Paris, at the embassy for the principality of Pontevedro, where it is set.

The overture Lehár wrote during the war to ingratiate himself with Hitler, whose favourite opera it was, and who reputedly saw it live more than 700 times, is gratuitously exhumed. It’s just a clumsy pot pourri, best avoided. 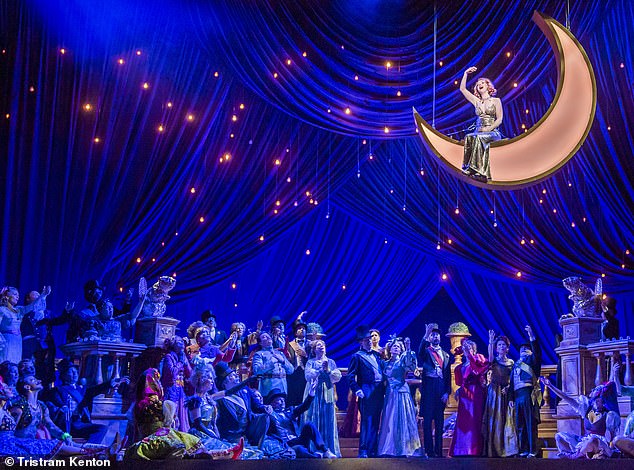 ENO’s new The Merry Widow looks good and must have cost a packet. But the new libretto and lyrics are all too often crude and coarse-grained, and the production is heavy-handed

ENO’S understandable aim is to find a new banker to sit alongside Jonathan Miller’s ageless The Mikado. But Miller honoured the spirit of the piece, and the rewriting was limited.

Here, April De Angelis and Richard Thomas rewrite the whole thing so that even familiar favourites such as Vilja’s Song are totally redone, turning the lyrics into sticky doggerel.

In the middle of Vilja’s Song there’s a dance sequence, crudely performed by a lightly clad troupe of male dancers, as if from a local strip club, joined by two beavers. 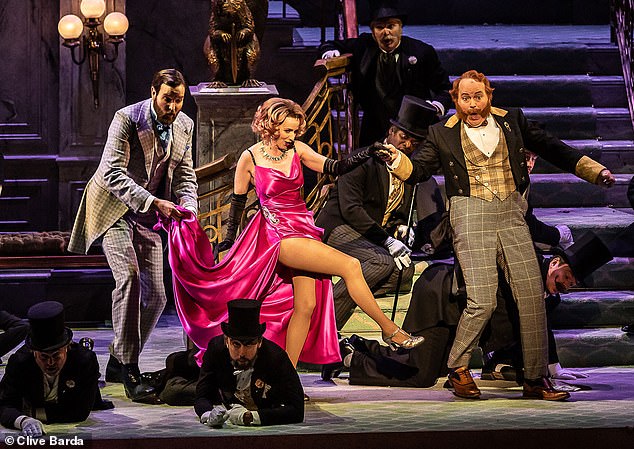 From left: Nicholas Lester, Sarah Tynan and Andrew Shore. Tynan is a glamorous Hanna, but her voice is too small for the house but as the ambassador, Shore copes with typical aplomb

What have beavers got to do with The Merry Widow? Correct answer: nothing. ENO’s answer: a lot, because the writers have made the beaver the national animal of Pontevedro.

Those familiar with sexual slang will readily understand why. There are even toy beavers on sale in the foyer. Hasn’t ENO’s management got better things to do than cheapskate marketing ploys like this?

Lavatorial humour is ever present. As indeed are lavatories. Six are dragged centre stage at the beginning of Act II so the male cast members can engage in a urinating competition.

Lehár’s wife Sophie was Jewish. But Adolf Hitler was a fan of the composer’s work. In 1938 she was made an ‘honorary Aryan’.

On the first night this was greeted by the well-oiled habitués on freebies with gales of laughter. In the words of the late Tony Hancock: ‘Swipe me, how glittering!’

Sarah Tynan is a glamorous Hanna, but her voice is too small for the house. She is well supported by Nathan Gunn’s suave Danilo, Robert Murray’s ardent Camille and Rhian Lois’s well-presented Valencienne.

Andrew Shore, as the Pontevedrian ambassador, copes with the beavers and all the other rackety stuff, with typical aplomb. In the pit, the Estonian conductor Kristiina Poska makes heavy weather of Lehár’s glorious tunes.

Someone had the clever idea of amplifying the dialogue so that none of the crude sallies could be missed. But then, all too often, they forgot to switch the mikes off during the singing. What a mess.

English Touring Opera’s spring outing takes them to 18 different places across the country. On offer are two established masterpieces – Verdi’s Macbeth and Mozart’s Idomeneo – and one rarity: Rossini’s Elizabeth I.

Composed for Naples in 1815, it was a rush job, with the overture filched from Aureliano In Palmira, and then used to much greater effect in The Barber Of Seville.

The libretto is a typically inaccurate take on English history, with Elizabeth I wanting to make the heroic Earl of Leicester her consort, only to discover that he is already married to the daughter (though she never had one) of her hated rival, Mary Queen of Scots. 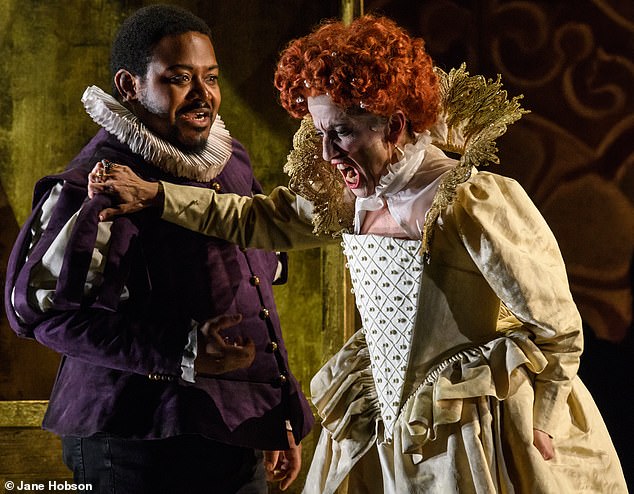 Rossini specialist John-Colyn Gyeantey (above with Mary Plazas as an exceptionally well sung Elizabeth) makes the most of the thankless role of the villain, Norfolk in the ETO production

If this was Verdi, bodies would litter the stage. Being Rossini, it all ends happily, except for Elizabeth, who is the same hacked-off old boot at the finish as she was at the beginning. Elizabeth herself is exceptionally well sung by Mary Plazas.

It’s extraordinary, on such scanty resources, that ETO’s director, James Conway, can cast so well. And here the cast bats all the way down the order. A former Cardiff Singer Of The World finalist, Luciano Botelho, is a first-class Leicester.

Rossini specialist John-Colyn Gyeantey makes the most of the thankless role of the villain, Norfolk. Lucy Hall is a capable Matilde, and young Joseph Doody makes a strong impression as the Queen’s secretary.

John Andrews and his orchestra offer an idiomatic account of Rossini’s flawed but fascinating score. James Conway himself directs with his usual clarity and lack of fuss.

Well worth a visit.