The tell-tale signs he was lying included the amount he itched nose, the low volume of his voice, and the number of times he said ‘no’ as he was quizzed by detectives.

Grindr killer Port was convicted of murdering at least four men, drugging them with a lethal amount of date rape drug GHB after meeting them on dating sites.

He dumped three of their bodies in a graveyard and one outside his flat in Barking, east London.

Now a documentary will shed light on how body language was the key to revealing the crimes he committed.

Faking It: Tears of a Crime, which airs tonight at 10pm on Investigation Discovery, will show various interviews between Port and investigating officers.

During his police interviews, Port answered ‘no’ 40 times out of the 47 responses he gives to the questioning officers.

According to the experts, this indicated that he was guilty as he continued to emphasise the word ‘no’.

As well as this Port’s volume drops, suggesting that the words he is saying are not matched with the level of confidence or conviction behind them, experts said. 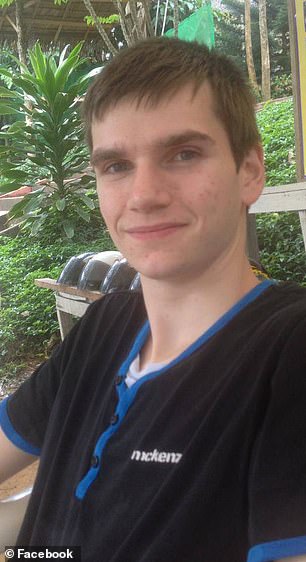 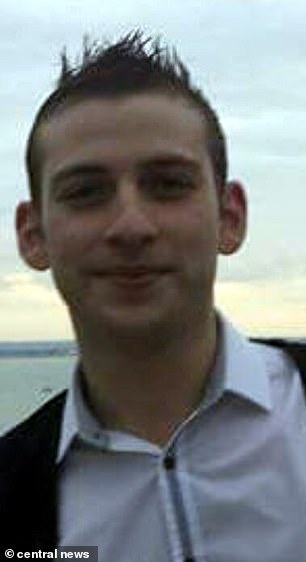 His body language showed constant signs of anxiety and the volume of his voice drops with every answer.

Professor of Linguistics Dawn Archer argues that these are clear indicators that Port is lying.

She said: ‘Guilty speakers will use more negation… his volume drops, which suggest that the words he’s saying aren’t matched by a level of confidence.

‘In other words, he’s not believing the no’s as he’s saying them.’

Other signs of anxiety included closing his lips in order to make sure he didn’t say too much to the officers, and crossing his arms in order to not ‘leak’ information. 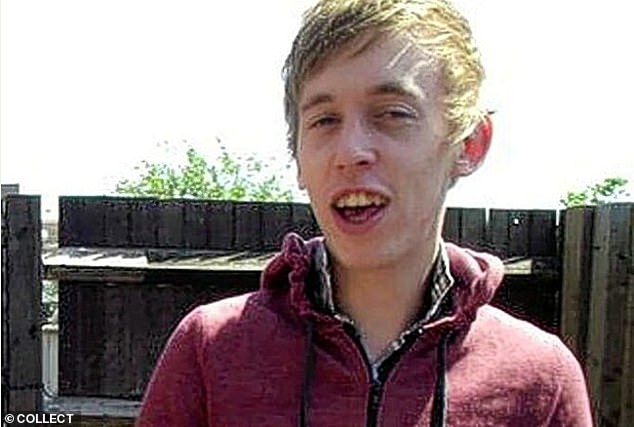 Anthony Walgate (pictured above) was another of Stephen Port’s victims 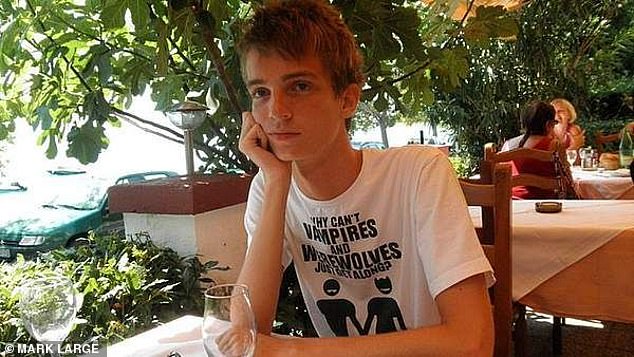 Another sign of anxiety is that the volume of his voice is extremely low during the interviews.

Experts say when we are telling lies we distance ourselves from our lies with our volume.

In one clip, the experts zoom in to focus on Port’s body language and see his right fist is clenched,  but we also see the hand squeeze up tension.

The experts believe that Port thinks he is hiding his tension as he squirms in his seat.

St Margaret’s Church, Barking, where the bodies of two of Stephen Port’s alleged victims were found 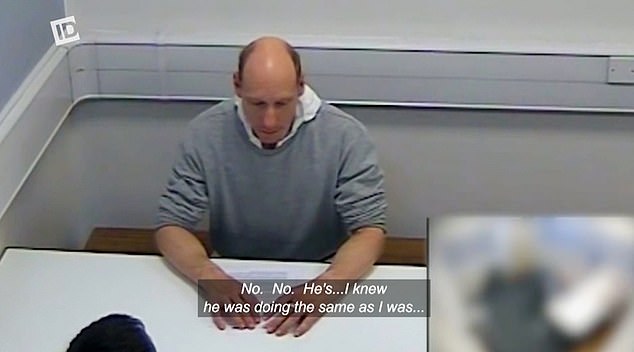 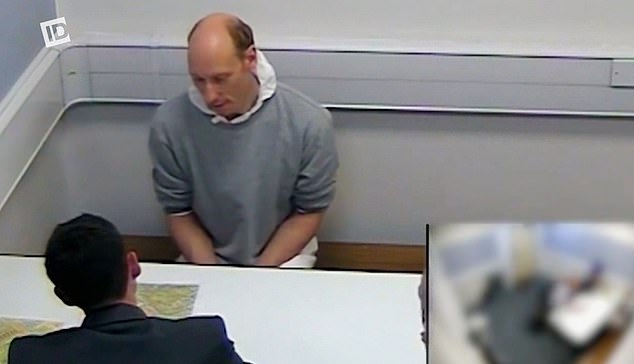 June 4, 2014: Police find Stephen Port at Barking station in East London with a young man he had drugged who has collapsed. Port admits they had taken illegal drugs but is not arrested.

June 19: Anthony Walgate, 23, given drug overdose and raped by Port who dumps body outside his flat and calls 999, claiming he has found an unconscious man.

June 26: Port suspected of lying to police and charged with perverting the course of justice. Released on bail. He is not accused of murdering Mr Walgate.

August 28: Gabriel Kovari, 22, given an overdose and raped by Port who dumps the body against a graveyard wall.

September 20: Daniel Whitworth, 21, given a drug overdose and raped. Port dumps his body against the same graveyard wall. Mr Whitworth is wearing Mr Kovari’s top and is in a bed-sheet which has Port’s DNA on it.

October 1: Detective Chief Inspector Tony Kirk tells local paper the three deaths within a mile of each other are not being treated as suspicious.

March 23, 2015: Port jailed for perverting the course justice by lying over Mr Walgate’s death. Released on licence in June with an electronic tag.

September 13: Jack Taylor, 25, given a drug overdose and raped by Port. Body found next to the same graveyard.

October 15: Port arrested on suspicion of four murders and charged. Later charged with attacks on eight other men.

In one of the later interviews, Port is faced with tougher questions and it’s clear he is under pressure.

The interviewer asks Port is he was telling the truth about the boys.

‘Young boys in the early stages of their youth in their early twenties found dead.

‘The type of men you say you find attractive, all dead now Stephen.’

He replies in an almost inaudible tone and says: ‘Apart from Anthony I know nothing about the other three and how they came to be…’

He then goes on to say that everything he has told the officers up to this point is true. 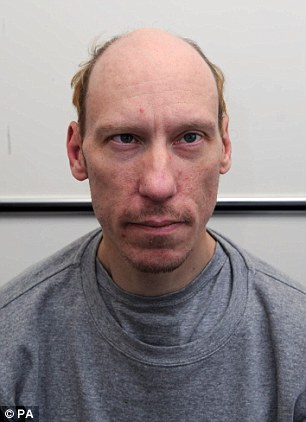 The experts said it would be more credible if he would have said ‘everything I have told you is true’.

Later on in the interview we can see a vibration from Port’s leg as he taps.

The body language experts said that when we are fearful we produce adrenaline which charges the muscles, preparing us to run from attack, as Port cannot run, this energy is dispersed through his leg.

The capillaries in his nostrils then start swelling, creating an itch, which he releases with a scratch.

The experts then say his pitch going up and volume going down are all signs of anxiety and stress ‘which if he was innocent would be no problem’.

Port was convicted after a seven-week trial. The judge described Port as a ‘wicked and monstrous’ killer and said he had carried out the murders in order to ‘satisfy his lust’ for sex.

Scotland Yard had faced allegations that it failed to link Port to all four murders, despite their marked similarities.

It was only after the death of his final victim, Mr Taylor, that a full investigation was launched.

Commenting on the Met’s handling of the case, and its failure to link the killings, former Scotland Yard detective Colin Sutton told the progamme: ‘I’m baffled to be honest. I can’t explain how this could happen.

‘Ultimately, all of this stems from the fact that nobody recognised that these four very similar deaths of young gay men in a very small area were linked.

‘They were treated as individual unexplained deaths rather than somebody looking at the bigger picture and the fact that they formed a series of murders all by one man.

‘You’ve now got four deaths in this small area and of course the connection’s not that difficult to make because you’ve actually got a name, you’ve got Stephen Port who you know has told lies about the very first one.’

Forensic psychologist Kerry Daynes, an adviser to the Home office and to the Prisons Service, comments: ‘I think the police failure in this case is literally catastrophic.

‘Drugs assisted sexual crime happens to members of all different types of communities and just because you’re a member of the gay community, doesn’t mean that you should be taken any less seriously than anybody else.’

A Metropolitan Police spokesman said: The report documenting the findings of the Independent Office for Police Conduct’s independent investigation into the Stephen Port case has been received and its contents are currently being reviewed.

‘It would be inappropriate to comment further at this stage.’

Serial killer Stephen Port joins a grisly who’s who of the vilest criminals in Britain today.

He was handed a whole-life order – meaning he will die in prison.

Arthur Simpson-Kent, 49,  was given the same sentence in December 2015 after he killed former EastEnders star Sian Blake, 43, and their sons, Zachary, eight, and Amon, four, before burying their bodies in the garden of their home in Erith, Kent. 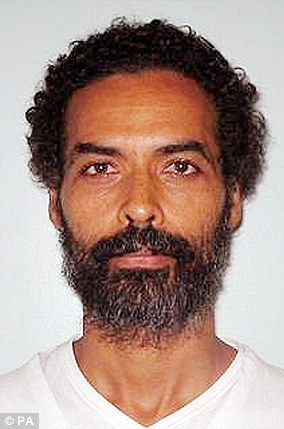 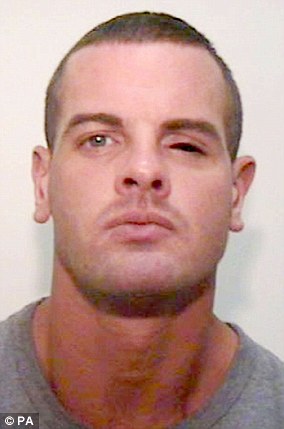 Arthur Simpson-Kent, left and Dale Cregan, right, have both been given whole life terms

The cannabis dealer fled to his native Ghana before being extradited back to Britain where he admitted the killings.

According to the Ministry of Justice, 54 prisoners are serving a whole-life order, although that does not include those serving their terms in secure hospitals. Also on the infamous list is the ‘Yorkshire Ripper’ Peter Sutcliffe and club bouncer Levi Bellfield, who was handed the term for murdering two young women and trying to murder a third.

Steve Wright will also die behind bars for the murders of five prostitutes in Ipswich, as will Michael Adebolajo, one of the two murderers of soldier Lee Rigby.

Serial killer Rose West was convicted in 1995 of a murder spree with husband Fred at the Cromwell Street ‘House of Horrors’ in Gloucester.

She is joined by Joanna Dennehy who was described in court as ‘arguably the most dangerous female prisoner in custody’. She was jailed at the Old Bailey in February 2014 for murdering three men and stabbing two more.

There are other notorious killers who have not been given a whole-life tariff – including Soham murderer Ian Huntley, who is serving a 40-year minimum term for killing 10-year-olds Holly Wells and Jessica Chapman in 2003.

While Stuart Hazell, who killed schoolgirl Tia Sharp and hid her body in the loft of the home he shared with her grandmother, was given a 38-year minimum term.

In 2013 the validity of whole life orders was thrown into turmoil after the European Court of Human Rights ruled prisoners must have the right to review for it to fit in with human rights laws.

But the Court of Appeal later said murderers who commit the most ‘heinous’ of crimes can be sent to prison for the rest of their lives, ruling that the statutory scheme enacted by Parliament which enabled judges to pass whole-life orders was ‘entirely compatible’ with the European Convention on Human Rights.