My Kitchen Rules made history on Wednesday night when Sonya and Hadil were kicked off the show after their ‘bullying’ reached boiling point.

Following a war of words on Tuesday, the NSW team hurled personal attacks, callous taunts and shocking insults across the table.

Their unacceptable behaviour prompted judges Manu Feildel and Pete Evans to ask them to leave the competition.

‘Don’t make me come for you’: The SHOCKING threat by Sonya and Hadil that resulted in them being axed from My Kitchen Rules for ‘bullying’ was finally revealed on Wednesday’s episode 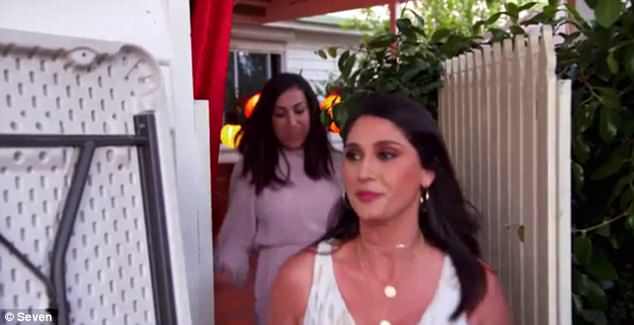 They’re outta here! Before entrées were even served, Hadil and Sonya were escorted into a taxi after they deliberately tried to get rivals Jess and Emma to ‘explode’ at the dinner table by snickering at them and muttering insults

‘No worries!’ Hadil yelled as they were unceremoniously given the boot.

Before entrées were even served, Hadil and Sonya were escorted into a taxi after they deliberately tried to get rivals Jess and Emma to ‘explode’ at the dinner table by snickering at them and muttering insults.

As guests at Suong and Kim’s home restaurant, they appeared to have no respect for their rivals from the start, as they held up the first course by inciting a feud at the table.

‘The fact they are sitting here is an insult to anyone that can cook,’ Hadil said quietly to her Sonya within the first five minutes of being seated.

Jess and Emma chose to remain civil and ignore the cruel comments. 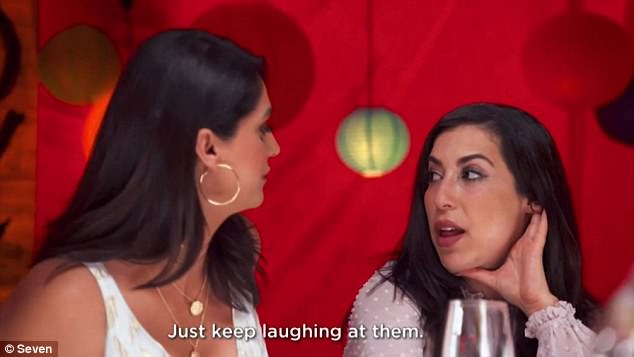 Stirring the pot! The NSW besties deliberately tried to start a feud with rivals Jess and Emma at the table, with Hadil telling Sonya to ‘keeping laughing at them and they’ll explode’ 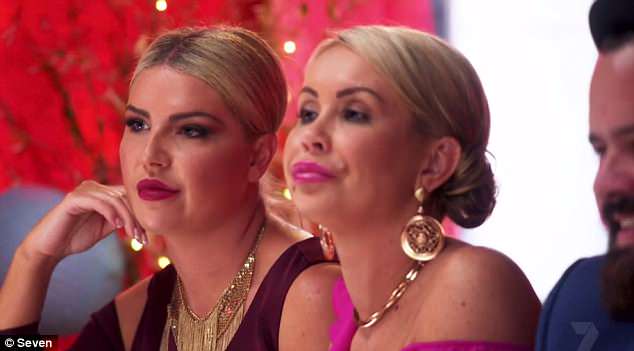 ‘They must have missed the memo, the circus was down the road. They’re a bunch of clowns!’ Hadil added, as the blonde sisters maintained a dignified silence.

The arrival of Pete and Manu did little to rein in the inappropriate behavior, with Hadil whispering to Sonya: ‘Keep laughing at them and then they’ll explode.’

As the mocking and taunting continued, the teams around the table appeared disgusted at their behaviour and expressed shock and disappointment.

‘They’re trying to wind Jess and Emma up and get reactions,’ Stella observed.

After Jess overheard a taunt by Hadil comparing the pair to ‘a no-frills cheapo princess’, she stormed out of the dining room, announcing: ‘Seriously! I can’t do this.’

‘Sit down! You think you’re a princess, but a real princess wears diamonds, not cubic zirconias,’ Sonya yelled across the room.

At that moment, Jess turned to point a harsh finger at the pair, asking them: ‘You think you’re funny?!’ 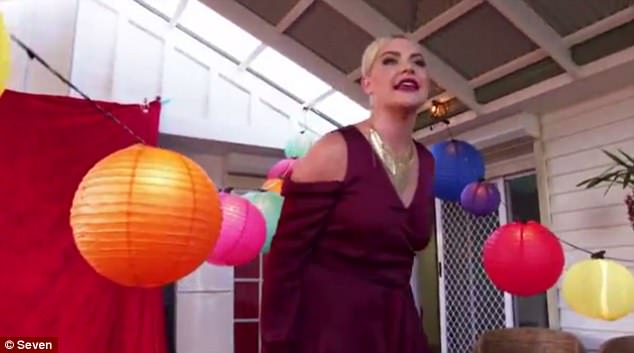 She’s had enough! Jess stormed out the dining room as the vile attacks continued to escalate, before turning back at Sonya and Hadil to ask pointedly, ‘You think you’re funny?!’ 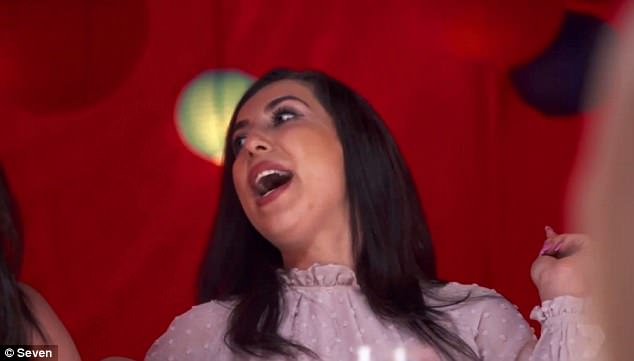 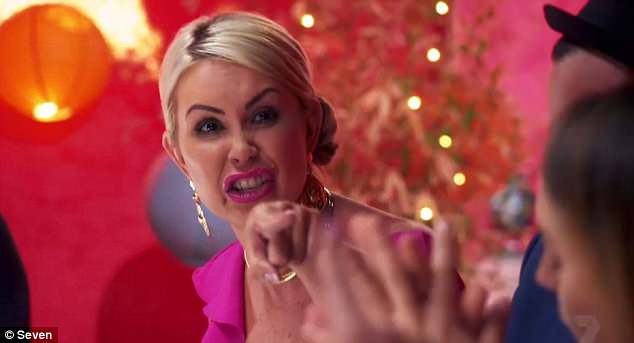 ‘You have serious issues!’ Emma blasted Hadil for claiming she needed a doctor ‘to fix her face’

Refusing to acknowledge her, Hadil childishly turned to Sonya and remarked: ‘Is the blowfish gasping for air?’

‘I’ve got a really good doctor you can go to to fix your ugly face,’ Hadil added, as Emma hit back: ‘You need to go to a doctor, because you have serious issues!’

The other teams then decided to intervene, with Jazzey asking Hadil to ‘stop being so rude’ and Josh asking them to have respect for hosts Kim and Suong. 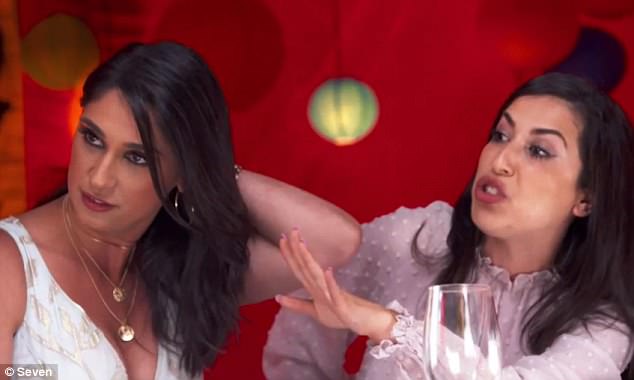 ‘I’ll come for all of you’: Sonya and Hadil threatened other guests at the dinner party for being ‘disrespectful a***holes’ – which prompted the celebrity judges to intervene

When Jess returned to the table, Hadil continued: ‘They don’t belong in top eight, because they can’t cook!’

Stella asked for Hadil to stop, which only angered her further and prompted her to shout: ‘You stop talking! Why are you talking?’

Emily then asked: ‘Who do you think you are?’

Josh told them to be respectful as guests in Kim and Suong’s home, but Hadil responded with a threat: ‘Shut up Josh! Stay out of it, don’t make me come for you.’

‘We’ll come for you too, don’t you worry!’ Hadil also snarled at Stella and Jazzey.

Sonya continued: ‘I’ll come for all of you, because you’re all disrespectful a***holes!’ 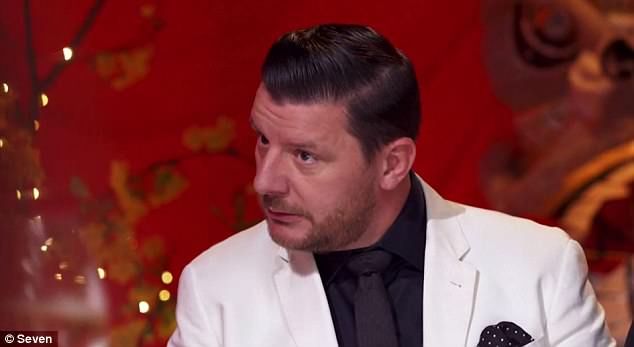 ‘You’re excused from the table’: Manu Feildel stepped in to end the heated argument and told Sonya and Hadil their behaviour was not welcome in the cooking competition 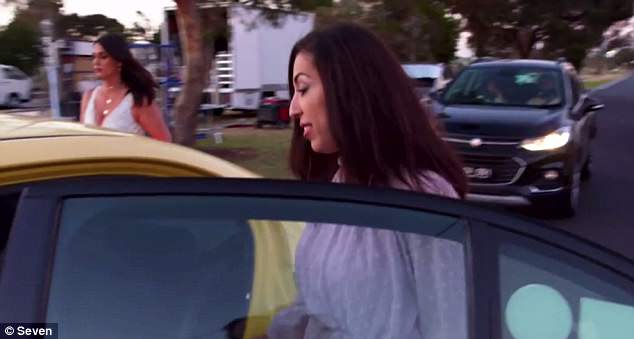 Gone forever? While Pete and Manu told the contestants that Sonya and Hadil had ‘left for the evening’, it is believed they will not return to the competition next week

Manu stepped in, saying: ‘Enough! Things have got too out of hand, this is a cooking competition, and this behaviour is unacceptable. Sonya and Hadil, you are excused from the table!’

While Pete and Manu told the contestants that Sonya and Hadil had ‘left for the evening’, it is believed they will not return to the competition next week.

Manu, 44, previously told Yahoo! Be of his decision to kick off the team: ‘It went too far. Pete and I felt very uncomfortable and it was time to stop and say that’s enough.’

Ahead of the episode, Jess and Emma told The Daily Telegraph: ‘We’ve copped so much flak for being the team that got kicked out before the show even started, but we’re glad viewers can finally see it wasn’t us.’

My Kitchen Rules returns to Channel Seven on Sunday at 7.30pm 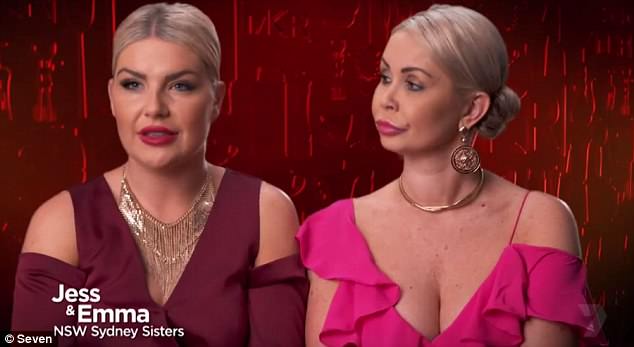 Must-see TV! My Kitchen Rules returns to Channel Seven on Sunday at 7.30pm