The moment the largest solar flare in 12 years erupts

Scientists have captured the moment a massive burst of radiation erupted from the sun, in the largest solar flare observed in over 12 years.

Using the Swedish Solar Telescope in La Palma, the researchers were able to gather ‘unheard of’ views of the powerful event in the opening moments of its life.

The flare spotted on Wednesday was one of three events known as X-category flares that took place over the course of 48 hours, with each reaching energies comparable to one billion hydrogen bombs.

Using the Swedish Solar Telescope in La Palma, the researchers were able to gather ‘unheard of’ views of the powerful event in the opening moments of its life, as seen in the video above. The largest flare occurred at 13:00 GMT (9:00 a.m.) and had an energy level of X9.3

HOW THIS TYPE OF STORM AFFECTS US

According to the NOAA’s space weather prediction center, last week’s solar storm was a G4 level, which could affect:

Power systems: Possible widespread voltage control problems and some protective systems will mistakenly trip out key assets from the grid.

Spacecraft operations: May experience surface charging and tracking problems, corrections may be needed for orientation problems.

Visible aurora: Aurora has been seen as low as Alabama and northern California (typically 45° geomagnetic lat.).

‘We can only observe about 1/250th of the solar surface at any one time using the Swedish Solar Telescope, so to be in the right place at the right time requires a lot of luck.

‘To observe the rise phases of three X-classes over two days is just unheard of.’

According to the team, an X-class flare can form and reach its peak intensity in roughly five minutes, making it difficult to catch the opening moments when these events emerge.

But in this case, the researchers were able to do so for three.

One of these flares was the largest seen in over 12 years, and the 8th largest in modern records, which began in 1996.

‘The number of Active Regions, where flares occur, is low, so to have X-class flares so close together is very usual.

‘These observations can tell us how and why these flares formed so we can better predict them in the future.’

With these high-detail observations, researchers can investigate the conditions in which these events form.

This could help scientists create more accurate ways to predict them in the future.

And, it could help to better protect satellites and other instruments.

Flare number six: NASA’s Solar Dynamics Observatory captured this image of an M8.1 solar flare, as seen in the bright area on the right, on Sept. 8, 2017. The image is a blend of extreme ultraviolet light in the 131 and 171 angstrom wavelengths.

‘Solar flares are the most energetic events in our solar system and can have a major impact on earth,’ said Professor Mihalis Mathioudakis, who led the project at Queen’s University Belfast.

‘The dedication and perseverance of our early career scientists who planned and executed these observations led to the capture of this unique event and have helped to advance our knowledge in this area.’

The flare that erupted from the sun last week was the biggest seen in 12 years, and caused radio blackouts on Earth.

Two high-intensity solar flares were emitted, the second of which was the most intense recorded since 2005, the Space Weather Prediction Centre (SWPC) said.

Solar flares are giant explosions on the sun that send energy, light and high speed particles into space.

The number of solar flares increases approximately every 11 years, and the sun hit another solar maximum in 2013.

The biggest flares are known as ‘X-class flares’ based on a classification system that divides solar flares according to their strength.

The smallest ones are A-class – near background levels – followed by B, C, M and X.

Similar to the Richter scale for earthquakes, each letter represents a 10-fold increase in energy output.

Just days later, NASA said the storms are continuing, with what the space agency says is a ‘mid-level solar flare’ that peaked at 3:49 a.m. EDT on Friday.

It was the sixth sizable flare from the same active region since Sept. 4, NASA said.

And, the event caused stunning auroras over northeast America, and even as low as Alabama and northern California.

The earlier flares knocked out radio communications for one hour on the Earth’s side facing the sun, as well as low-frequency communications used in navigation.

At 10:10 am BST (5:10 am ET) on Wednesday an X-class solar flare – the most-powerful sun flare category – erupted from a large sunspot on the solar surface.

The second of the two flares is the largest in 12 years, after an X17 that erupted from the solar surface in 2005.

The flares knocked out radio communications for one hour on the Earth’s side facing the sun, as well as low-frequency communications used in navigation. 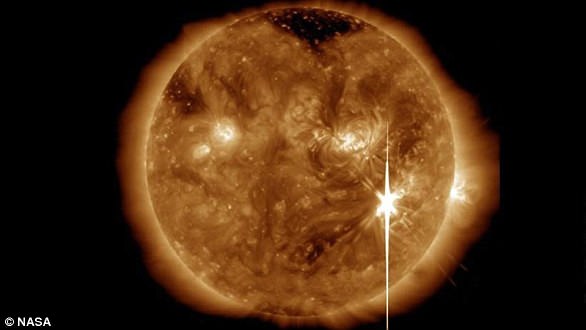 Solar flares result from an accumulation of magnetic energy. A hole in the outermost layer of the sun opens the magnetic field up to stretch further than usual, which results in a gradual increase in solar wind. Pictured is a Nasa image of yesterday’s second, larger flare

These are the fourth and fifth sizable flares from the same active region since Sept. 4.