The most googled health questions of 2017

We’re all guilty of resorting to ‘Dr Google’ to investigate our worrying aches and ailments.

Now the most popular health-related internet searches have been revealed by Google Trends.

Some of the most popular terms looked up world-wide were on diet, addiction, opioids and the Netflix series 13 Reasons Why.

The data, collected from January to mid-December, shows that searches for the ketogenic diet – made famous by Kim Kardashian – quadrupled this year.

Here MailOnline reveals the 10 most Googled questions on health topics… 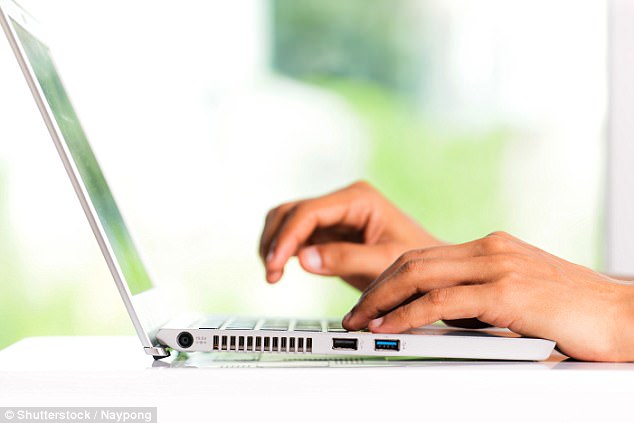 What is opioid addiction?

Why is croup worse at night?

Why coconut oil is bad for you

Why is apple cider vinegar good for you?

Why can’t I orgasm during intercourse?

A ketogenic diet is a low-carb diet, where the body produces ketones in the liver to be used as energy. It’s also known as a low-carb high-fat (LCHF) plan and the most famous include Paleo and Atkins.

Meat, fish, poultry and eggs are all allowed, as are non-starchy vegetables and leafy greens. Dairy, organic, full-fat is recommended for keto diets.  It involves limiting added sugars and white, refined carbs and only a small amount of fruit is allowed.

By lowering carb intake, the body is induced into a state known as ketosis, a natural process that helps us survive when food intake is low. This makes us produce ketones, which are produced from the breakdown of fats in the liver.

The goal of the keto diet is to force your body into this metabolic state – essentially it’s a type of starvation but not of calories but carbohydrates.

However, experts say low-carb diets bring heart and cancer risks from eating too much fat and protein.

A large number of former American football (NFL) players have been diagnosed with or have suffered from chronic traumatic encephalopathy, or CTE.

This is a degenerative brain disease caused by repeated hits to the head that result in confusion, depression, dementia, aggression and suicidal thoughts. 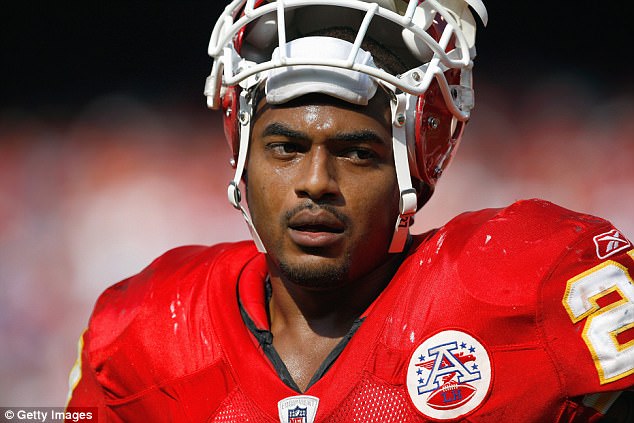 Larry Johnson, 38, said he believes he has CTE after his nine-year NFL career was tarnished by his six arrests and assault charges against women

Former NFL running back Mike Adamle has spoken out about his battle with the degenerative brain condition.

The 68-year-old, who has since worked as a football announcer and WWE interviewer, said he can ‘feel the decline every day’ as the disease slowly robs him of brain function.

What is opioid addiction?

‘What is opioid addiction?’ was one of the most-Googled health topics, with interest having spiked in light of America’s ‘epidemic’ that hit the headlines in October.

President Donald Trump has declared the epidemic a national emergency, as 2.4 million Americans are estimated to be addicted to opiates, the narcotics that include prescription painkillers such as morphine and fentanyl, as well as heroin.

The crisis is reportedly killing 90 Americans every day. Overdose deaths are now the leading cause of death among young Americans – killing more in a year than were ever killed annually by HIV, gun violence or car crashes.

Experts say the opioid epidemic is set to spread to Europe as doctors continue to over prescribe the highly-addictive painkillers.

Another popular search term was ‘what is Lupus?’. Selena Gomez has likely prompted the interest after the US singer revealed she has had a two-year-long battle with the condition and had a kidney transplant.

Lupus is a long-term condition causing inflammation to the joints, skin and other organs. It is an autoimmune disease in which the body’s immune system mistakenly attacks healthy tissue in many parts of the body. 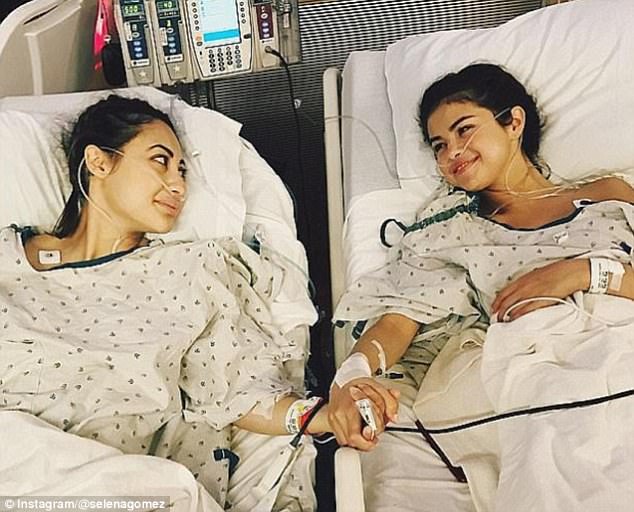 Bonding experience: Selena revealed news of her transplant on September 14 by sharing a photograph of her and Francia in their hospital gowns

It’s not fully understood what causes it. A viral infection, strong medication, sunlight, puberty, childbirth and the menopause can all trigger the condition.

There’s no cure, but symptoms can improve if treatment starts early.

Most people get hiccups sometimes. They should only last a few minutes – you can usually wait for them to go away or treat them yourself without seeing a GP.

There’s often no obvious reason why you get hiccups, but some people find certain things trigger their hiccups, such as stress, strong emotions, like excitement and eating and drinking, according to NHS Choices.

In rare cases, hiccups that last longer than 48 hours can be due to a medical condition or a medicine you’re taking.

The Netflix show 13 Reasons Why also sparked a flurry of searches. The series, on which Selena Gomez was an executive producer, came under fire for glamorizing suicide in the eyes of teens like its 17-year-old protagonist.

The phrase ‘how to commit suicide’ rose 26 per cent above what would normally have been expected for that time, according to a research paper published in JAMA Internal Medicine in October.

Why is croup worse at night?

Croup is a condition that affects babies’ and young children’s airways. Symptoms include a hoarse voice, difficulty breathing and a rasping sound when breathing in.

Your child will usually have cold-like symptoms to begin with, such as a temperature, runny nose and cough.

Children with croup who seemed well or better during the day can wake up with a barky cough and difficulty breathing at night. This is partly because blood flow to the respiratory tract changes when a child lies down. Plus, dry air can aggravate it.

Keeping your child in an upright position can ease their coughing. If your child is running a high temperature, you should try to bring this down using paracetamol or ibuprofen. There is also a risk of dehydration, so ensure that your child drinks plenty of fluids.

In the past, steam has been used to help the symptoms of croup, but there is little evidence that it is successful.

Why coconut oil is bad for you?

Coconut oil has been hailed as some sort of superfood that can help you stay trim but no study has found coconut oil helps weight loss.

A report released by the American Heart Association in June advised against the use of coconut oil. 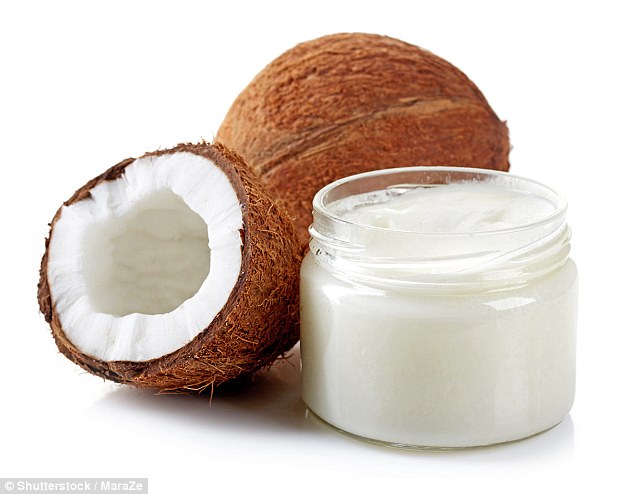 Solid white coconut oil is now the darling of celebrities and bloggers, paleo enthusiasts and sellers of so-called superfoods

While coconut oil is sold as a health food, it contains higher levels of saturated fats than pork lard and butter.

The American Heart Association recommends limiting saturated fats – which are found in butter, cheese, red meat and other animal-based foods.

Why is apple cider vinegar good for you?

Drinking apple cider vinegar can help with acid reflux and is a good anti-fungal liquid.

It also has been proven to lower blood sugar levels and help with people who have diabetes.

There is loose research around apple cider vinegar helping with weight loss, but registered nutritionist Amy Shapiro said she hasn’t seen enough evidence that it does. 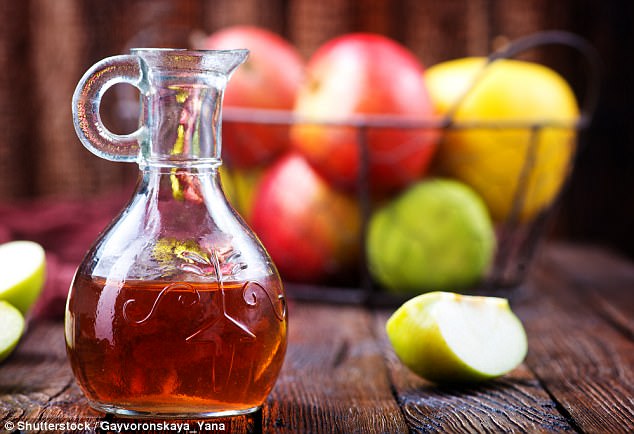 Apple cider vinegar can help increase metabolic rate slightly, but it isn’t enough to combat a large meal such as a burger and fries

It can also slightly increase the metabolic rate in your body when you are digesting foods.

However, experts have urged women not to use trendy apple cider vinegar to ‘tighten’ their vaginas.

Online blogs and forums are encouraging women to carry out this bizarre douching technique with the promise of making vaginas tighter, as well as cleaning excess menstrual residue.

Why can’t I orgasm during intercourse?

There are several things that can affect a man’s orgasm. These are often associated with ejaculation problems, but not always.

According to the NHS, these include: erectile dysfunction (impotence) and retrograde ejaculation, which occurs when semen, which would, in most cases, be ejaculated via the urethra, is redirected to the urinary bladder.

Most experts believe the cause is usually psychological but it may be worth going to your GP if you are persistently suffering to rule out underlying conditions.

Causes of orgasm problems in women can be physical or psychological and include not being stimulated sufficiently, worrying about sexual performance and mood disorders, such as depression.

Problems with physical health, lack of knowledge or fear of sex, a previous traumatic sexual experience, problems in the relationship and the menopause are also listed as reasons by the NHS.