The mystery of the San Fernando Valley orgasm whisperer

A mysterious man dubbed ‘the orgasm whisperer’ has emerged in California with a reputation for transforming sex lives, leaving dozens of women raving about his ‘life changing’ services on social media.

The man, who solely goes by ‘M’ and worked for 10 years as a personal trainer, runs a website where he calls himself the O-Man and teaches women how to orgasm.

And the results, according to his glowing testimonials, are stunning as women claim they were able to orgasm for the first time in their lives. Others claim the O-Man helped them climax dozens of times within a few hours and they’re now able to orgasm easier than ever before.

And his secret isn’t some wild technique – he assesses his client’s posture and body alignment, fixes it through vibration or massage therapy, and leaves them more relaxed and prepared to orgasm.

He made the connection between body alignment and sex when he used his physical therapy skills during a Tinder date last fall, where he left his partner absolutely stunned.

She told him their wild rendezvous wasn’t ‘normal’ saying, ‘You have a gift’.

She advertised his skills on Facebook and through word of mouth his fame spread through Los Angeles’ San Fernando Valley.

And despite his fame, the 5ft 8, brown-eyed orgasm expert has gone to great lengths to keep his identity a secret.

A mysterious man dubbed ‘the orgasm whisperer’ has emerged in California’s San Fernando Valley with a notorious reputation for transforming sex lives, leaving dozens of women raving about his ‘life changing’ services

And the reviews on his website are nothing short of praiseworthy.

‘Through his workouts and spinal adjustments, I’ve been able to not only cut down the amount of time to orgasming…I’ve started orgasming multiple times in a row. Not to mention the physical changes taking place. I’m taller, leaner and overall more fit. This has brought so much joy into my life and changed my whole perception about orgasming, the female body, and my relationships with men. His patience, care and thoroughness shine through his magical work!’ one testimonial on his website says.

‘It took a week of work with the O-man for me to have the best orgasm of my life,’ another woman said.

While there are a myriad of orgasmic dysfunction therapies and remedies out there, there isn’t much research in the O-Man’s musculoskeletal approach to improving sex.

‘Here’s the thing about orgasms. Everyone says they’re “not a push-button thing.” They’re all “mental.” Well, what if there is a button, or a series of buttons, that we can push? What if we’ve just been pressing the wrong ones all along? What if the knees are a button? Or even the shoulders?’ he said in an interview with Mel Magazine, which reported that dozens of women raved about his talents on Facebook.

He says he learned the importance of posture and the alignment of muscles and nerves in the body after he got into a horrific gym accident where a medicine ball impacted his ribs and he needed over three years of physical therapy.

This woman said the O-Man’s work is ‘pleasure medicine’

When he couldn’t keep paying to rehab his diaphragm he developed his own solutions, experimenting to create tricks to relieve his muscle tension and misalignments.

One of those key discoveries was vibration, which can unclench muscles and relax tension – a tactic he now uses with his clients.

By 2015 when he had healed, he could take ‘one look at a person’s body and tell them which joits and muscles were out of alignment’ and he’d fix it through simple stretching, deep-tissue massage and a few targeted exercise to stabilize the spine and improve posture.

‘Nobody knows about this. I tried to find other people who are trying to help women orgasm this way, but I found nothing,’ sex therapist Jamila Dawson based in Los Angeles said to Mel Magazine.

‘I absolutely believe orgasm is related to psychology, relationships and culture. It would be ridiculous to say that it’s just a purely physical issue of pelvic or spine alignment or that people shouldn’t try to address it with a multifaceted approach,’ the O-Man said.

He criticized the idea that women can’t orgasm due to some mental block.

‘When you treat women with orgasmic issues like there’s something wrong happening in her brain, it sends a difficult message,’ he said.

‘Alignment is important head to toe,’ she said.

She said that the pelvic floor functions optimally when it’s in a balanced, neutral position. If anything is off in the neck, hips or knees, the lower back overcompensates, which throws the pelvic out of alignment. 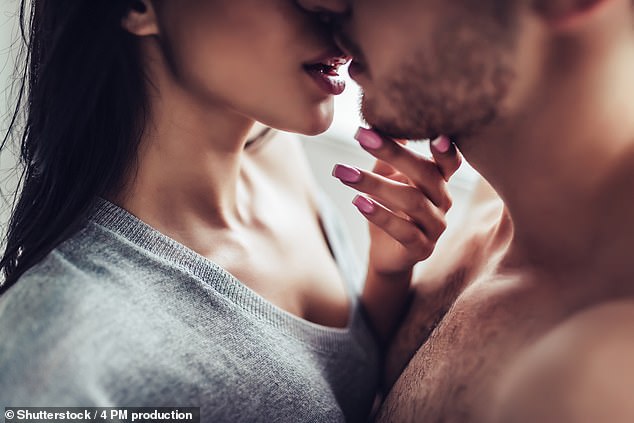 The O-Man says he’ll conceal his identity to the public until he’s ready. He says he’s entertaining the idea of training other people to teach others how to help people orgasm using his techniques and may design and release sex toys that will stretch and stabilize certain muscle groups

When this happens the muscles that stabilize the pelvis become overly tight and asymmetric, which restricts blood flow and prevents contractions in muscles, like the glutes and abductors, which are needed for strong orgasms.

She said that the alignment or position of one’s spine can have a major impact in a person’s sex life.

Even just slumping or hunching limits the diaphragm and in turn the pelvis.

‘Orgasmic dysfunction should never be looked at through the lens of just the pelvic floor. It’s a total body problem,’ she said.

While focused on women, the O-Man said he also works with trans and non binary people and started taking on male clients via webcam.

‘Women have worse joint health. The way we treat their bodies is sort of like institutionalized insanity. We jam them into tiny shoes that ruin their feet and posture, constrain their diaphragms with bras, give them heavy bags and purses and coif them with haircuts that, while inarguably cute, force them to hold their necks in ways that throw them out of alignment,’ he said.

Still, the O-Man says he’ll conceal his identity to the public until he’s ready.

He says he’s entertaining the idea of training other people to teach others how to help people orgasm using his techniques and may design and release sex toys that will stretch and stabilize certain muscle groups.

Until then his lips are sealed.