A Nazi spy moved to a tiny Irish fishing village and tested its bay for a potential U-boat invasion of Britain, a BBC documentary claims.

Dr Ludwig Mühlhausen settled in Teelin – which has a population of just 250 – in south Donegal in 1937 as he mapped out a back-door route to conquer the UK.

The professor, who became a decorated SS officer in the Second World War, presented himself as learning Irish and its history during his six-week visit.

But the celtologist, who lectured at Berlin University and Hamburg University, would take numerous pictures of the village and measure the depth of Donegal Bay.

The Nazi would lower lead weights into the tide, which later led people to believe he was testing it as a U-boat submarine base.

In a less subtle addition, Dr Mühlhausen was also believed to have put a huge picture of Adolf Hitler on his bedroom wall – which he erected as soon as he moved in.

Dr Mühlhausen’s letters back to the Third Reich reveal he saw the Irish economy as a ‘waste’, outlining how the nation’s farming and fishing industries could be improved. 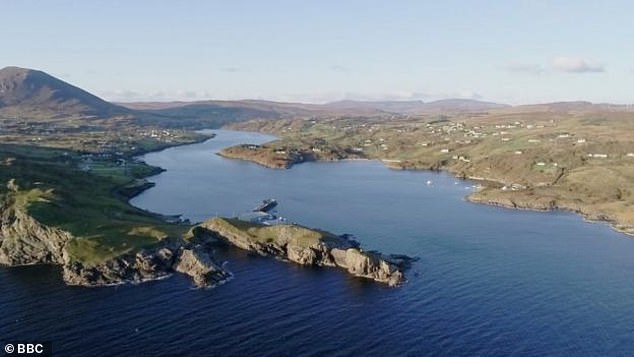 The professor, who became a decorated SS officer in the Second World War, presented himself as learning Irish and its history during his six-week visit (pictured, the bay) 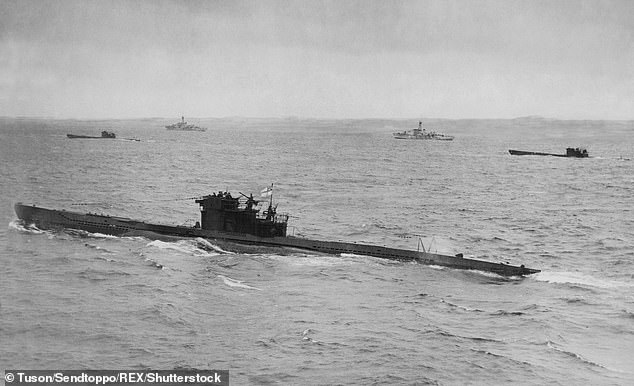 But the celtologist, who lectured at Berlin University and Hamburg University, would take numerous pictures of the village and measure the depth of Donegal Bay. The Nazi would lower lead weights into the tide, which later led people to believe he was testing it as a U-boat submarine base (pictured, U-boats surfacing after surrender at Londonderry in 1945)

He was described as an ‘enthusiastic Nazi’ in a secret file stored at the Military Archives in Dublin.

One report read: ‘He thinks German culture would be good for us, and Ireland would be better run by Germans or British.’

Having mastered Irish and returned to Germany, Dr Mühlhausen pumped Nazi propaganda in Irish into the region.

Locals were astonished to hear him beamed across from Berlin, in which he recited British atrocities in Ireland and pressed them to remain impartial in the war. 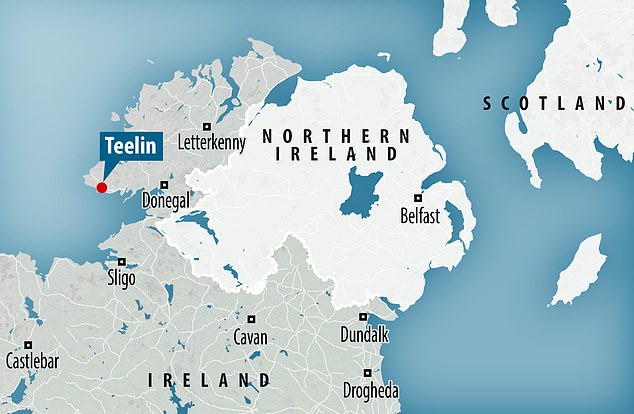 During the Second World War he was a decorated SS officer under the paramilitary’s Reich Leader Heinrich Himmler.

But as the war drew to a close in 1945, Dr Mühlhausen remained locked up in Naples by the Allies.

From his cell he sent a letter to Ireland’s president Dr Douglas Hyde – whom he described as a ‘personal friend’ – begging to help secure his release.

It was scrawled on the back of an envelope in old Irish and included the Nazi’s SS rank and prisoner of war camp. There is no reason to suggest Dr Hyde ever replied.

Ireland, its army so under-resourced they barely had a serviceable rifle between them, had little to contribute militarily. The judgment made in Dublin was that to side with the British would jeopardise the country’s fragile sense of independence so soon after its constitutional split from the UK in 1920.

But that left its thousands of newly enlisted soldiers — who had joined up when it seemed their country might have to fight an invader, whether the Germans, or the British taking over Ireland in order to forestall the Germans — kicking their heels.

Instead of fighting for their country’s honour, they were dispatched to cut peat, knee-deep in bogs.

Ireland’s neutrality was never totally enforced and always veered towards the Allies, despite the undisguised pro-German leanings of some hard-line republicans and the generally anti-British sentiment of the bulk of the new nation’s population.

There was more co-operation on the quiet than was officially acknowledged. British flyers who crash-landed in Eire, for example, were repatriated whereas German ones were interned.

Once the conflict was over and the danger passed, however, attitudes hardened again, as was shown by PM Eamon de Valera’s contemptible nose-thumbing gesture of publicly offering his condolences to the German government on Hitler’s death in 1945.

Suddenly the men who had fought for Britain became Dublin’s fall guys. In August 1945, an executive order named 4,983 of them and pronounced them guilty of desertion after a farcical court martial. They were officially dismissed from the Irish army, convicted en masse in their absence without being given a chance to defend themselves.

Dr Mühlhausen has been exposed in Nazi sa Ghaeltacht or A Nazi in the Gaeltacht – meaning Irish-speaking – which will be broadcast on BBC Two Northern Ireland.

The programme follows his movements from being catapulted up the Nazi Party in Berlin – due to his adoration of Hitler – to his surprise move to Teelin.

Investigative journalist Kevin Magee told the Belfast Telegraph: ‘I wanted to find out if the story of the Nazi in the Gaeltacht was true, so I began investigating, talking to locals, asking questions and examining a whole variety of sources.

‘Piece by piece, I was able to pull this remarkable story together. When I began my journey, I had no idea I would discover just how committed Mühlhausen was to the entire Nazi project.’

He added: ‘The plot reads like a World War Two thriller, except this story is for real.’

Germany’s plans to invade Ireland were only recently uncovered after a top secret dossier was finally released in 2012.

The document, published in 1940, contained detailed maps and postcards of the country and was kept by a family out of public view since the end of war.

And it revealed even though Ireland was officially neutral during the conflict, Hitler still viewed the country as a target for invasion.

The Irish allowed German U-boats and submarines into their waters during the Second World War, but the booklet entitled Militargeographische Angaben uber Irland pinpoints key cities and other sites in Ireland for destruction.

The paper – handed to high ranking Nazi officers – also included pictures of key locations such as dams, ports, cities, high ground and beaches which the German High Command believed would be of importance when they invaded.

These key places were numbered by military officials before being plotted on a series of eight fold-out maps, which would have been used during ‘Operation Sealion.’

On September 17, 1940 Hitler was forced to scrap Operation Sealion because of the Luftwaffe’s failure to gain air supremacy over England during the Battle of Britain.

The Nazi offensive never took place after the German defeat, but experts believe the document reveals what could have happened if the Nazi’s had conquered Britain.

Historical documents expert Richard Westwood Brookes said the booklet shows how the Irish were wrong to believe they were safe from invasion after accommodating the Nazis during the war.

He said: ‘This will come as quite a surprise as the Irish believed that the country’s neutrality protected them from the Nazis.

‘They were clearly wrong and it is a very sobering reminder that no one in the world was safe from the evil of Hitler.

‘Despite the fact that many Irish were sympathetic to Germany throughout the war, they were clearly earmarked by the Nais for invasion and for the same fate as all the other countries in Europe. 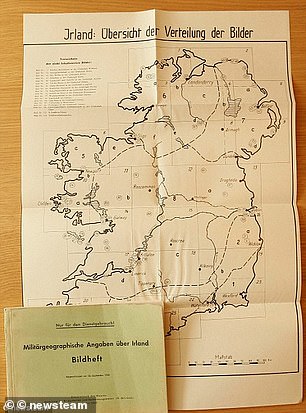 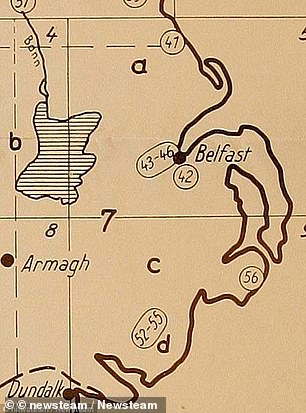 Mr Westwood Brookes said it was also possible that Hitler might considered invading Ireland first to establish an invasion force there for a later attack on the UK mainland.

He added: ‘It would have made complete military sense for the Germans to invade Ireland as it was a perfect location to set up to reinvade England in a bid to take Britain back from the Germans.

‘Ireland had strategic links to America as well so it would have made tactical sense for them to occupy the country swiftly.

‘We have naturally come across invasion plans for Britain before but I have never seen one for Ireland.

‘We are really expecting interest from Irish collectors – it is, after all, part of their history that more than likely they were completely unaware of.’