The new cold war: Britain will deploy 800 troops to Arctic

The new cold war: Britain will deploy 800 troops to Arctic amid fears over land-grab by aggressive Russia

Britain will send 800 troops to train in the arctic and prove to Russia it cannot make a land grab as the ice cap melts, the Defence Secretary said today

Britain will send 800 troops to train in the arctic and prove to Russia it cannot make a land grab as the ice cap melts, the Defence Secretary said today.

Gavin Williamson will use his speech to the Tory Party conference today to highlight another new threat from the Kremlin.

Mr Williamson has repeatedly warned of the threat from Russia since taking on the job last year, using it to lobby for new money from the Treasury.

Speaking in Birmingham later, Mr Williamson will point to Russia’s re-opening of Soviet-era bases high in the arctic circle.

Melting ice has made the far north more navigable than ever before and led to claims of race to take control over the territory and its natural resources.

Ahead of his speech he said there had been an ‘increased tempo’ of submarine activity and insisted it proved Britain needed to ‘demonstrate we’re there’ to ‘protect our interests’.

As part of the new strategy, 800 Royal Marine and Army commandos will be deployed to Norway every winter for the next decade, operating alongside US and Dutch marines as well as Norwegian troops.

Mr Williamson told the Sunday Telegraph: ”We see Russian submarine activity very close to the level that it was at the Cold War, and it’s right that we start responding to that.

‘If we could turn back the clock 10 years many people thought that the era of submarine activity in the High North, in the North Atlantic, and the threat that it posed did disappear with the fall of the Berlin Wall.

‘This threat has really come back to the fore.’ 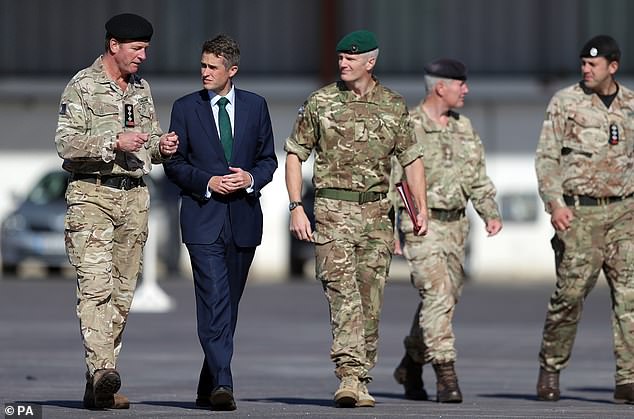 Theresa May and Boris Johnson traded blows today as a potentially tumultous Tory conference kicked off.

The former foreign secretary launched another vicious attack on the PM’s Chequers plan for Brexit – branding it ‘deranged’ and ‘preposterous’.

But a defiant Mrs May shot back that her critics were ‘playing politics’ and insisted she is still confident of getting a deal with the EU.