If you think that the islands and rock formations in these photographs don’t look real, you’re not alone – the person who took them thinks so, too.

The incredible images, taken using a drone, show the other-worldly majesty of the Faroe Islands, a place that the photographer, Brazilian Henrique Murta, said was ‘too perfectly arranged’ to feel like the real world.

Henrique, who visited the archipelago with his father, told MailOnline Travel: ‘The place just doesn’t look real. Doesn’t feel real, actually. Everything is too perfectly arranged – colours and, especially, shapes.

‘As a geologist and nature photographer, I am fascinated – and even a bit obsessed – with natural monuments. And once you arrive the islands, the rocky cliffs and layered volcanic hills, become part of your scenery.

‘Monuments surrounded by monuments. All covered by a shiny carpet of fine green grass. So, it’s about deep natural beauty, uniqueness and also isolation.’

Henrique’s photo set of the Faroe Islands – which is located between Iceland and Norway – was commended in the Siena Awards Festival’s 2020 Drone Photo Awards in the series category. Scroll down to see just why the judges were so impressed…

This bizarre and striking rock formation is the Drangarnir sea stack on the Vagar island coastline. This image is Henrique’s favourite of the set. He said: ‘You can see my father and me on top of the first hill, like two little ants’ 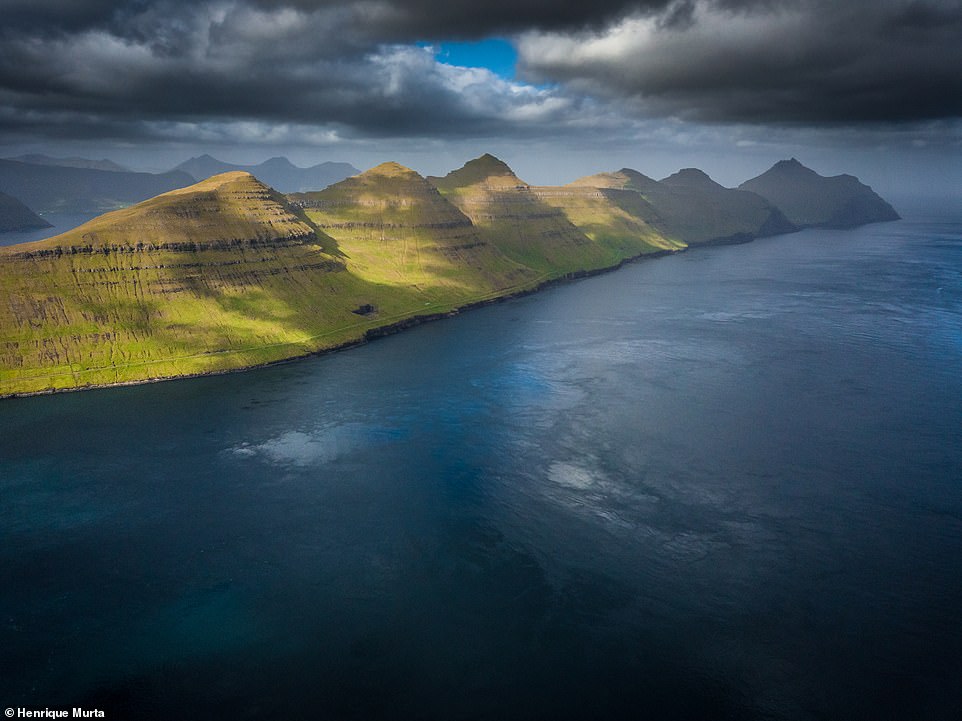 The photos were taken on Henrique’s first-ever visit to the Faroe Islands. He said: ‘It was an unforgettable photographic immersion with my old man, who happens to be an outstanding old school wildlife photographer. Anyway, I feel like planning another one now… ‘ Pictured is Kalsoy island, which has a population of just 150 and is known as ‘the flute’, because of its thin shape and many road tunnels, according to visitfaroeislands.com 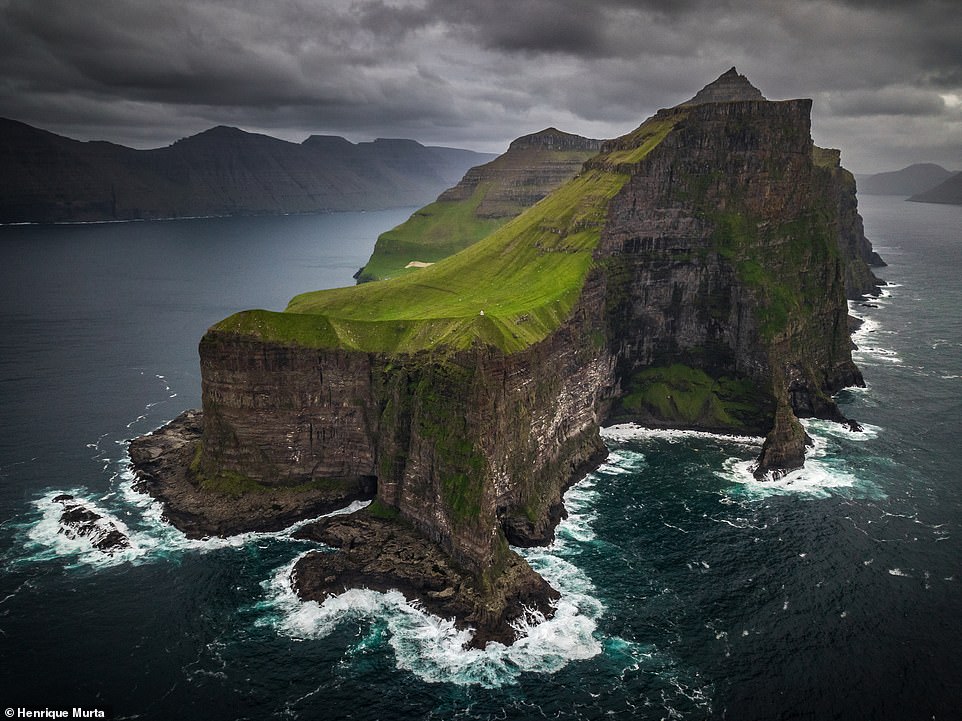 This spectacular image shows Kalsoy’s epic northern tip, where the Kallur Lighthouse is located. The structure is just visible here 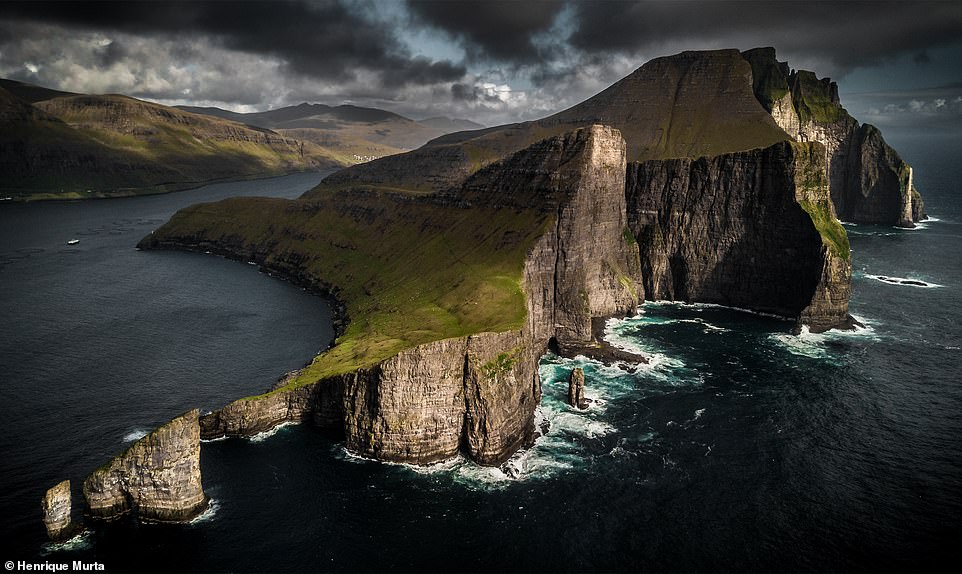 When asked what he hopes readers will get from his Faroe Islands photos, Henrique said: ‘I hope they get a bit puzzled. And let a contemplative state take over.’ This image shows the dramatic peaks that tower over Drangarnir sea stack off Vagar island 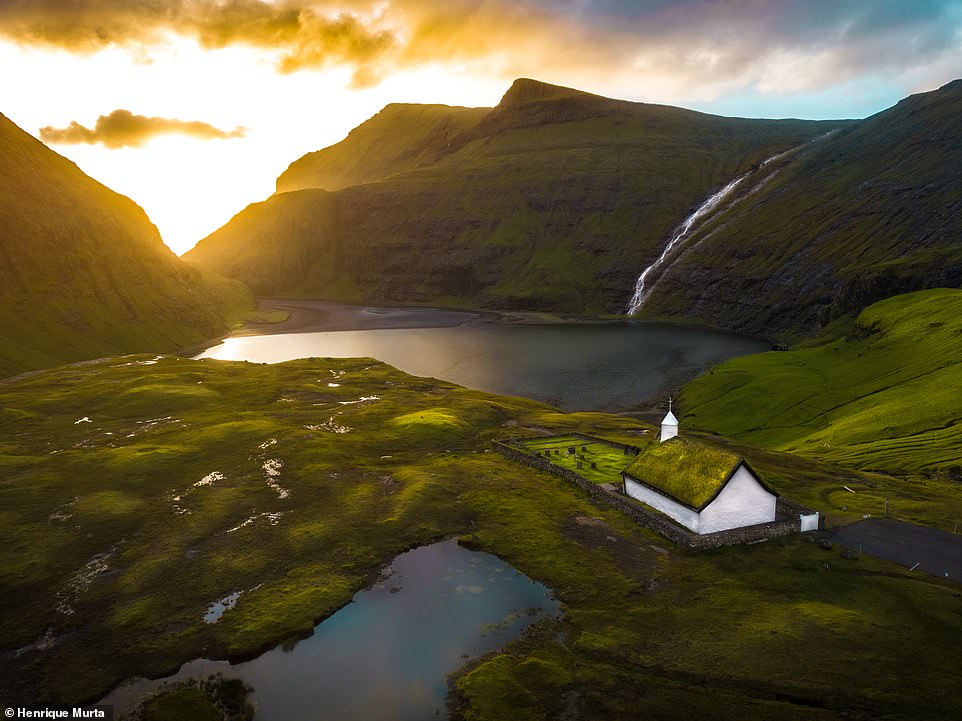 Streymoy island is known for its 1,600ft cliffs and grass-covered buildings, which include a dinky church (pictured) 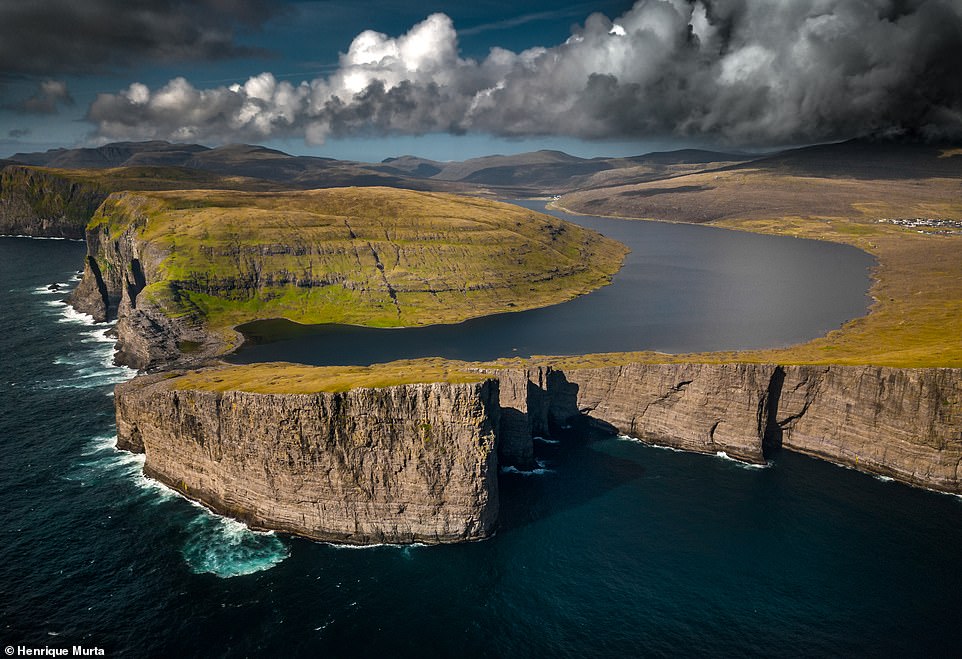 Spectacular Sorvagsvatn lake, which loops around Vagar island 90ft above the sea 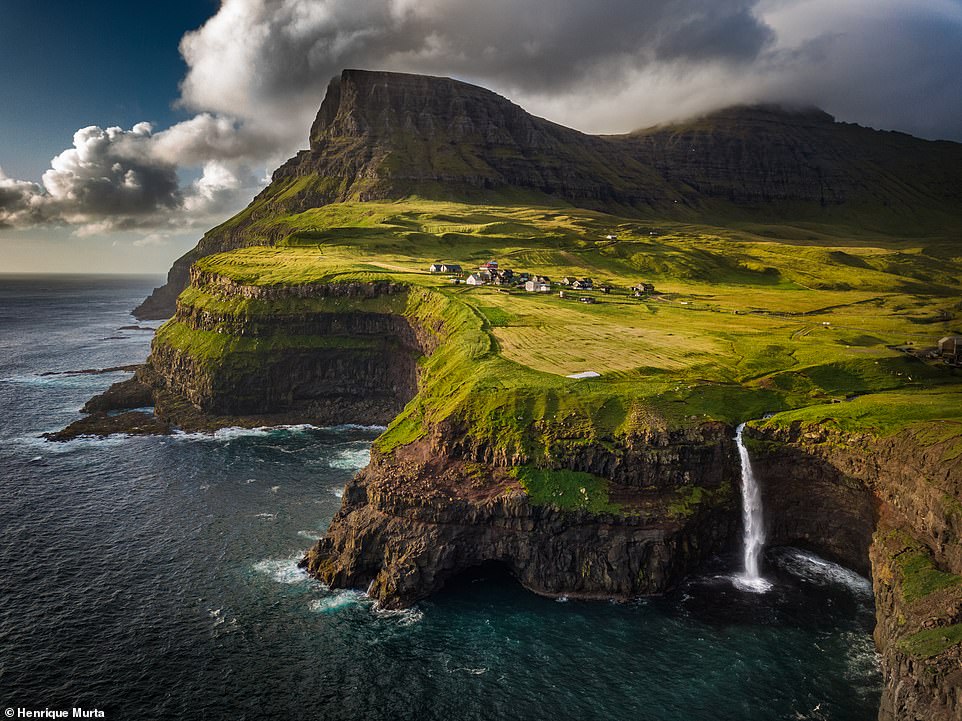 The amazing Mulafossur Waterfall on Vagar, an island where there is no let-up in breathtaking vistas 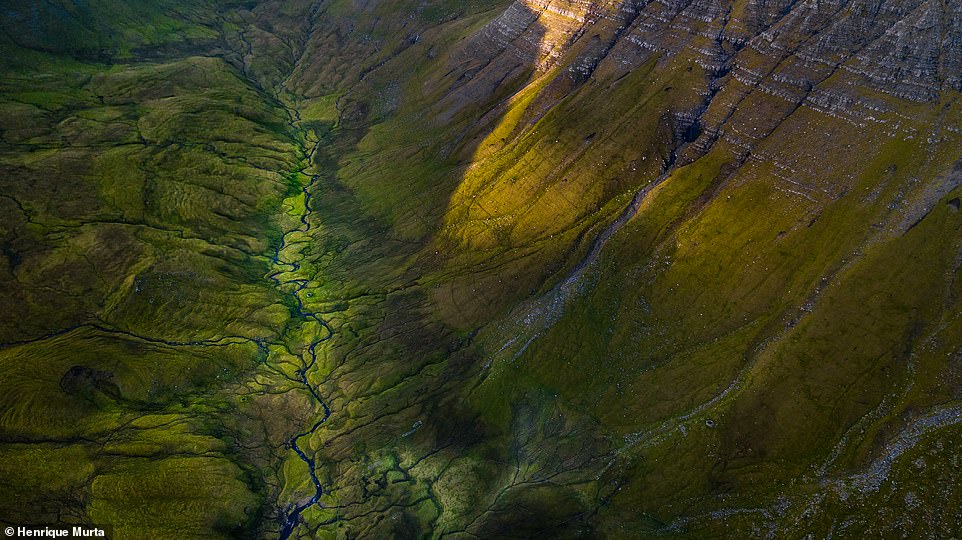 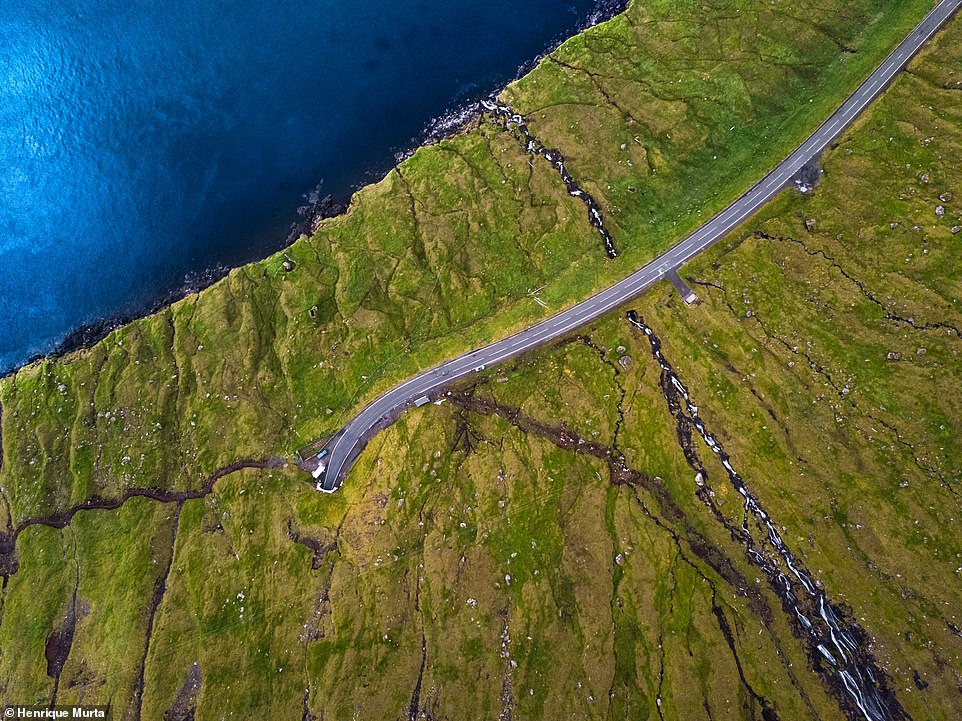 This stunning image shows one of the roads on Kunoy which, with six mountains higher than 800 metres (2,624 feet), is one of the archipelago’s loftiest islands 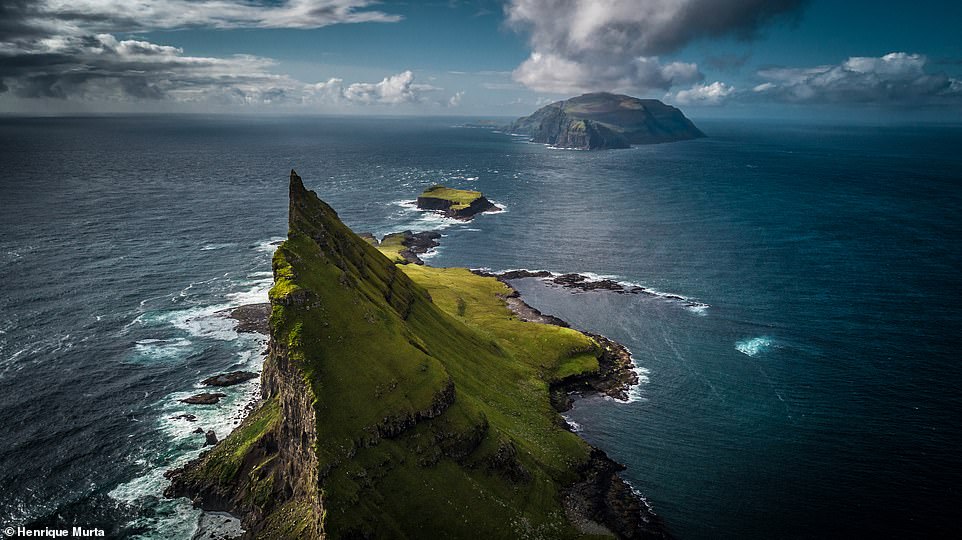 A view over jagged Tindholmur islet, west of Vagar, towards jaw-dropping Mykines – a Game of Thrones filming location that’s home to a lonely lighthouse and a colony of puffins