An Australian entrepreneur who runs a party supplies business has seen his family company’s annual profit double since he appeared on TV.

Dean Salakas, who co-owns The Party People with his younger brother Peter, appeared on the first season of Network Ten’s Shark Tank in March 2015 and made one ‘crazy decision’ which has paid off.

This has also led to his business getting jobs supplying party products like balloons and costumes for a range of TV shows, from MasterChef and Celebrity Apprentice to Studio 10, Neighbours, Home and Away and Packed To The Rafters.

Four years ago, he was representing the family company started in 1986 by his mother Mala, a former clown at children’s parties, and his maternal grandfather Peter Nikolas.

Dean Salakas, who runs a family-owned party supplies business, has seen his company’s annual revenue double since appearing on TV and rejecting an offer from a juice chain founder 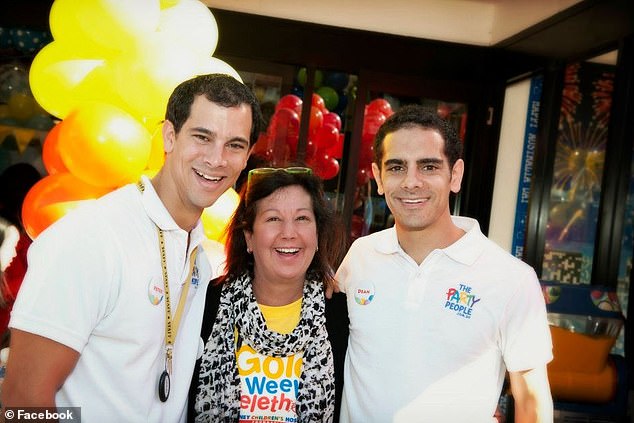 Dean Salakas (right with mother Mala), who co owns The Party People with his younger brother Peter (left), appeared on the first season of Network Ten’s Shark Tank in March 2015

Together, his mother and grandfather had bought the trademark of a party entertainment business and opened a new store at San Souci, in Sydney’s south.

The business started a website in 1999, after Mala Salakas made a bold decision during the era of slow, dial-up internet to let customers buy their goods without visiting the shop.

She put Dean, then a 16-year-old year 11 student, in charge of working with a web developer on a web page design.

This was eight years before her sons took over the family firm so she and her elderly father could retire.

In 2015, on the Shark Tank, millionaire Boost Juice founder Janine Allis offered Dean Salakas $400,000 for a 40 per cent stake in his business, which at that stage was expanding into a second store at Drummoyne, in Sydney’s inner-west.

Unable to contact other family members under the show’s strict rules, Mr Salakas declined her on-the-spot offer, thinking she had undervalued the company.

‘She wanted half the business for not very much,’ he told Daily Mail Australia on Friday. 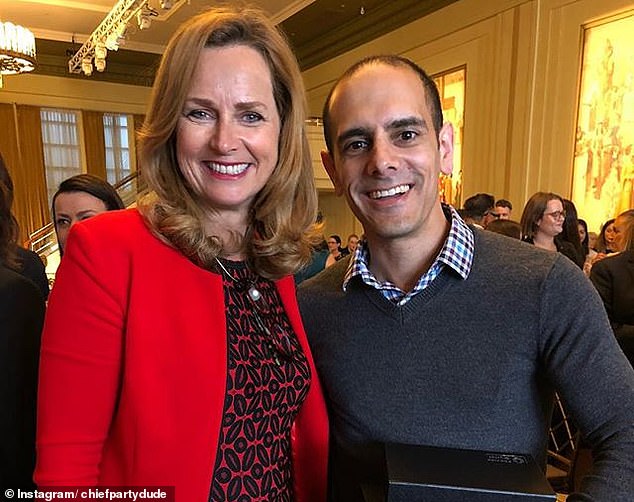 ‘As a family business, I was thinking in my head when I’m standing there, “I don’t think the family would be okay with us giving away half the business to someone we don’t know for so cheap”.’

Who are The Party People?

Mala Salakas, a former clown at children’s parties, and her father Peter Nikolas bought the trademark of a Sydney party entertainment business in 1986.

They then bought a store at San Souci, in Sydney’s south, and started a website in 1999.

Mala’s eldest son Dean appeared on the first season of the Shark Tank in March 2015 soon after the family business had opened a second store at Drummoyne, in Sydney’s inner west.

He turned down millionaire Boost Juice founder Janine Allis’s $400,000 to buy 40 per cent of the company.

The Party People, which supplies party products, has since seen its products appear on MasterChef, Celebrity Apprentice and Home And Away.

It provides a vast range of goods in-store or online, from balloons and fancy-dress costumes to novelty games and food catering supplies.

Dean Salakas, who has the official title of ‘chief party dude’ as a 36-year-old co-chief executive, asked Ms Allis if she would instead be prepared to buy 10 per cent of the company for $400,000.

They negotiated off-camera for half an hour, during filming for the seventh episode of Ten’s new show, with Mr Salakas revealing he was having second thoughts about rejecting her original offer.

‘Janine Allis is an amazing person. I would love to work with someone like that,’ he said.

‘I don’t think it was all good to reject it because it would have been great to have someone on board with her experience.’

Since appearing on the Shark Tank in 2015, The Party People’s annual profit has doubled from the good publicity.

The popularity, however, wasn’t without hurdles with the website crashing four years ago as demand soared, causing the software to ‘max out’ following his appearance on the top-rating TV show.

‘It was really annoying. We actually did prepare. We spent weeks with the hosting company setting up for it,’ he said.

The surge in popularity also caused health problems for Dean and his brother Peter, as they worked ridiculously long hours all-night, even going to bed at 9am and sleeping for just three hours. 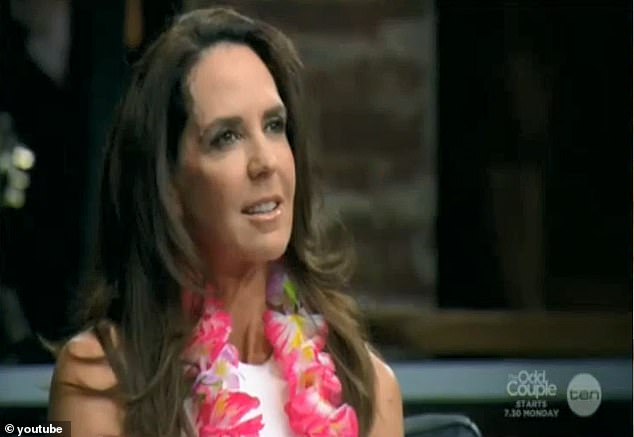 Dean Salakis told Daily Mail Australia he rejected Boost Juice founder Janine Allis’s offer to buy 40 per cent of the company for $400,000 because he thought it was too cheap

‘I was just too worn out,’ Dean Salakas said.

‘Even Sundays, we pulled all-nighters. I’d go to bed at 9 o’clock in the morning and get three or four hours.’

As business grew, the sleep deprived brothers continued working long hours until 2am, asking family and friends to help out, and returning to work at 7am.

‘It was really bad on our health. We had to see doctors,’ he said.

‘I laugh now but it was pretty full-on. We were all very tired and stressed.’ 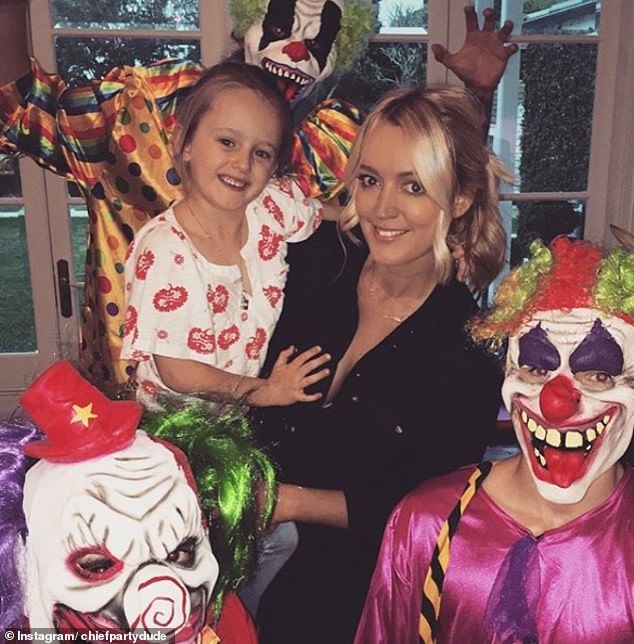 Since appearing on the Shark Tank in 2015, The Party People’s annual revenue has doubled from the good publicity (pictured is radio personality ‘Jackie O’ Henderson with daughter Kitty) in a store 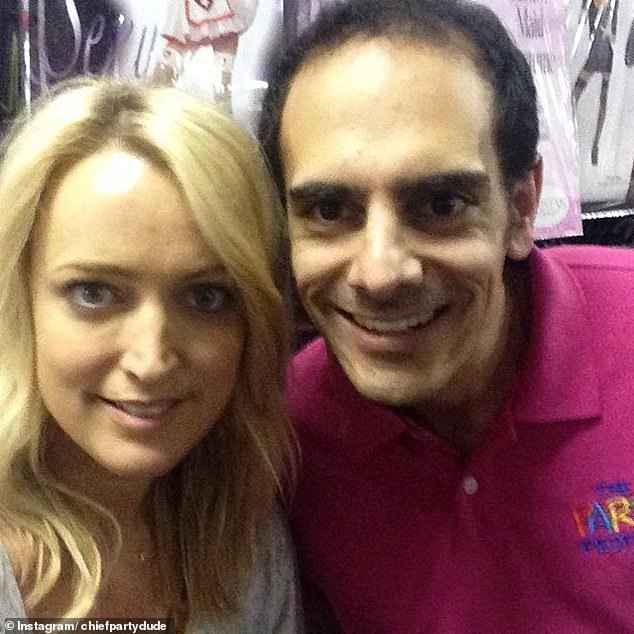 Dean Salakas (right with ‘Jackie O’ Henderson) said the popularity of the business surged after his appearance on the Shark Tank, causing him to work all-night with his brother

Since appearing on the show, annual revenue has doubled and The Party People’s second store at Drummoyne has turned into a 1,700-square metre mega store the size of a supermarket.

This shop, doubling up as a warehouse, grew so much that it took over the lease of three neighbouring stores.

Dean Salakas said that while their family business was expanding, attention from his 10-minute appearance on the Shark Tank certainly helped, with others businesses asking him to mentor young entrepreneurs. 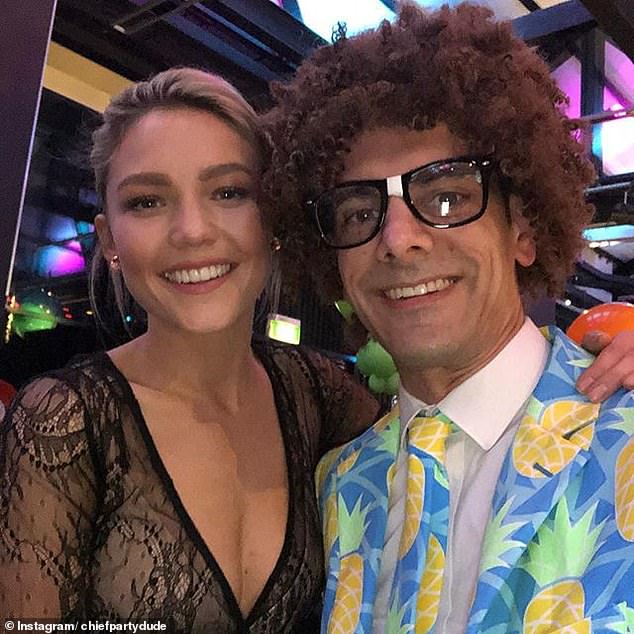 He has even been stopped on the street, joined business advisory boards and been invited to speak at conferences.

‘We’re still getting the benefits of being on the show now,’ he said.

‘I don’t think any of these things would have happened if we weren’t on the show.

As for turning down Janine Allis’s original offer to buy 40 per cent of the company for $400,000, Mr Salakas said other entrepreneurs had since made much more generous offers for a stake in the company centred around fun.

‘I’m happy that we didn’t take it because we’ve been able to grow this business organically and profitably,’ he said.

‘Certainly the exposure on the show, people started offering better.’