The perfumes EVERY woman wants for Christmas

Many of us will be eking out the last few drops of our favourite perfume to make it last until we (hopefully) receive a new bottle on Christmas morning.

And according to predicted sales figures, most of us will be hoping to spritz ourselves with the oriental floral fragrance of Chanel’s Coco Mademoiselle.

The scent, fronted by actress Keira Knightley for 12 years, is set to reign supreme in the 2019 UK Christmas perfume market.

Sales in the run-up to the festive season have already taken on an unassailable lead, outselling the closest rival  – a new scent from YSL released this year with singer Dua Lipa – by nearly two to one.

Coco Mademoiselle is predicted to make around £26.4million this Christmas – with expected sales estimated at 390,720 bottles.

Sales of premium fragrances are up four per cent on last Christmas, and retailers are predicting a strong set of sales – with the top three predicted scents all costing nearly £80. Only three in the top 10 cost under £70 for 50ml.

Beauty consumers spend nearly as much in the last quarter of the year on fragrance as they spent for the whole rest of the year.

Christmas is the busiest time of year for perfume sales, and the women’s fragrance market is expected to hit over £550million for the first time in the last quarter of this year, from October to December.

Coco Mademoiselle is predicted to be the number one fragrance this Christmas, making around £26.4million – with expected sales estimated at 390,720 bottles

The nation’s favourite fragrance for 2019 is Coco Mademoiselle, which was first launched in 2001.

Coco Mademoiselle is an oriental floral fragrance with top notes of orange, mandarin orange, orange blossom and bergamot. The middle notes are mimosa, jasmine, Turkish rose, and ylang-ylang, while the base notes are tonka bean, patchouli, opoponax, vanilla, vetiver, and white musk.

In second place for the UK’s favourite smelly Christmas present is new fragrance YSL Libre, which was launched this year with British singer Dua Lipa.

The launch video has notched up almost two million views on YouTube, and sales over the past couple of months have been phenomenal for a new fragrance. 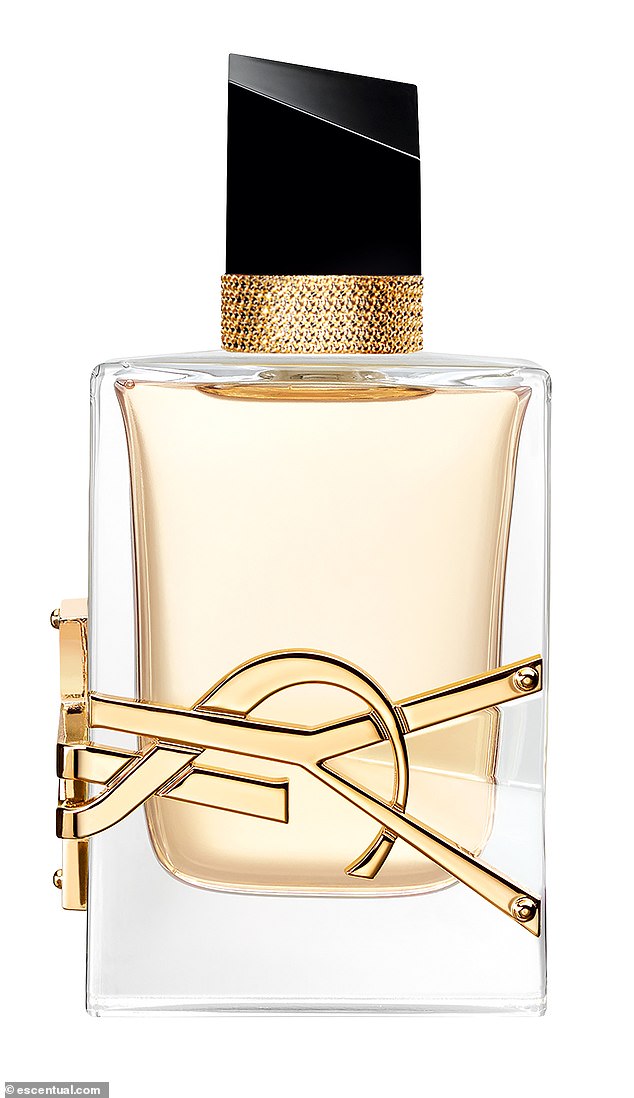 In second place for the UK’s favourite smelly Christmas present is new fragrance YSL Libre, which was launched this year with British singer Dua Lipa

Information from October to December sales

YSL Libre is an oriental fougere fragrance, with top notes of mandarin oil, petitgrain oil, lavandine France oil, and a blackcurrant accord. At the heart are notes of lavender oil, jasmine sambac absolute, jasmine grandiflorum India absolute, and orange flower absolute, while the base includes vanilla extract Madagascar, cedarwood oil, ambergris accord and musk.

In third place is the classic fragrance Chanel No 5, which is now 98 years old.

According to Chanel, the formula used to produce No 5 has changed little since its creation.

In 2013 Chanel ran a campaign with Marilyn Monroe, using a recorded interview, which referenced the Life magazine interview in which she revealed she wore No 5 to bed.

The top notes are bergamot, lemon, neroli and ylang-ylang. The heart is jasmine, rose, lily of the valley, and iris, while the base is vetiver, sandalwood, vanilla, amber and patchouli.

Sales of Chanel No 5 this Christmas are expected to reach around £12.65million, with around 193,800 bottles sold. 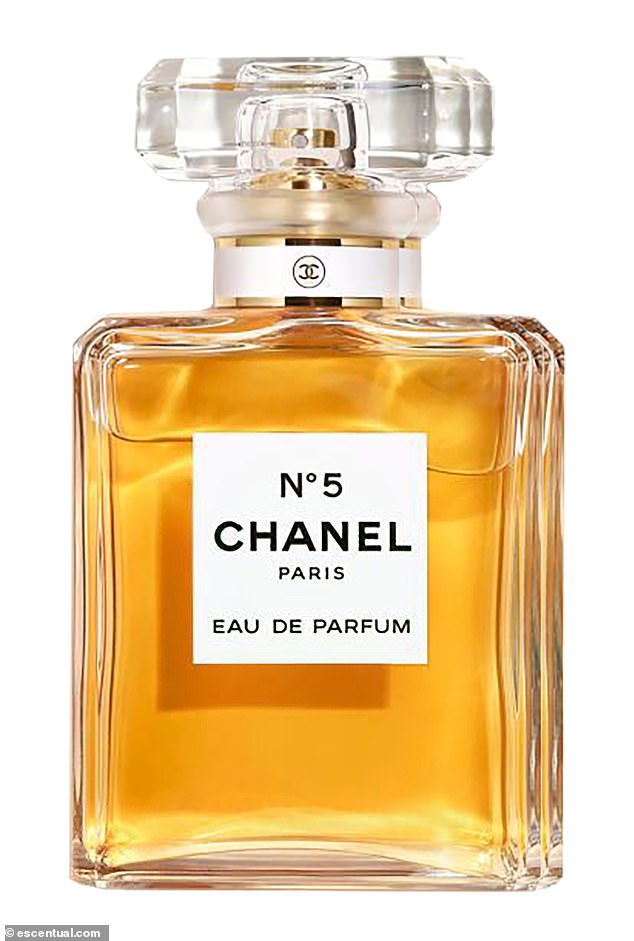 In third place is the classic fragrance Chanel No 5, which is now 98 years old and famously worn to bed by Marilyn Monroe

In fourth place this Christmas is Dior Miss Dior, which is thought will rack up sales of £8.25million over the festive season, amounting to 137,300 bottles.

The face of the Miss Dior has been actress Natalie Portman since 2017. The fragrance was renamed in 2012; it was originally called Miss Dior Cherie when it launched in 2005.

The scent is a chypre (the French word for Cyprus) and is characterised by Italian mandarin and blood orange top notes, a Grasse rose and lily of the valley heart, and patchouli base. 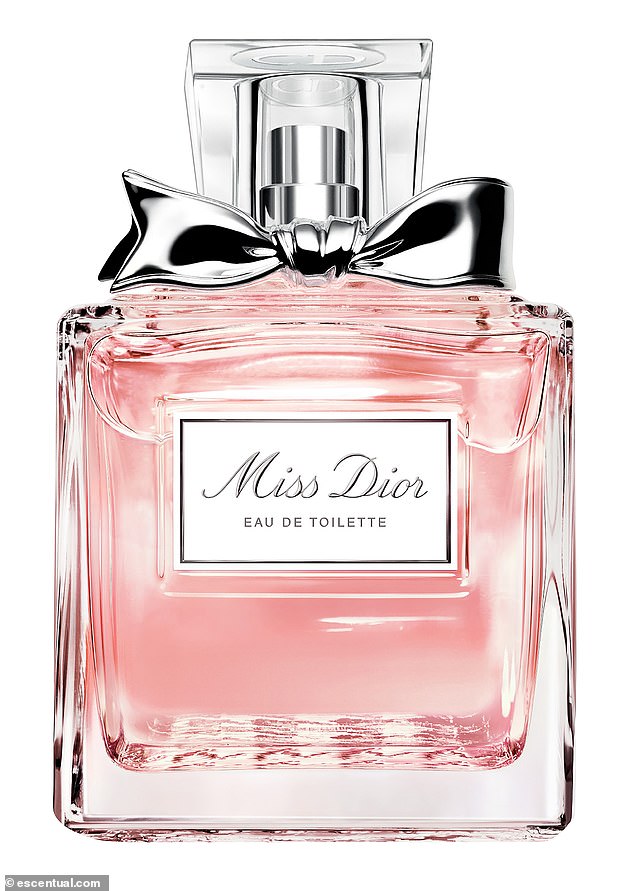 In fourth place this Christmas is Dior Miss Dior, which is thought will rack up sales of £8.25million over the festive season, amounting to 137,300 bottles

The fifth most popular fragrance is expected to be Lancome Idole – another new fragrance for 2019.

It is fronted by American singer and actress Zendaya Coleman, star of Spider-Man: Homecoming and Spider-Man: Far from Home.

The fragrance is expected to gross £7.7million in the last quarter of the year, selling around 130,700 bottles.

It is a modern chypre floral fragrance, with top notes of bergamot essence, and heart notes of rose essence, rose absolute, rose water and jasmine. The base notes are patchouli essence, cedar essence and vanilla extract. 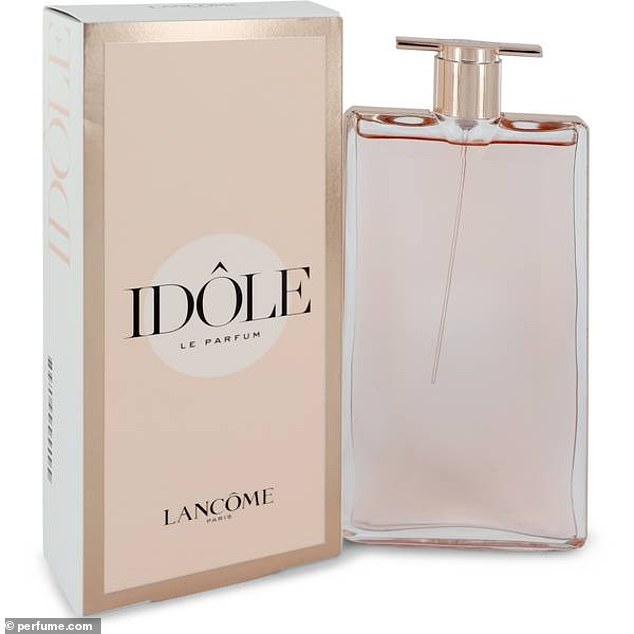 The sixth most popular fragrance for Christmas is YSL Black Opium, and it’s predicted to have sold £7.48million from October to December – around 121,600 bottles.

This is the 2014 re-interpretation of the classic YSL Opium perfume from the 1970s, and the face of the current perfume’s campaign is actress Zoe Kravitz.

Black Opium is a dark and mysterious fragrance with black coffee accord, mandarin and bergamot as the top notes. At the heart are notes of orange blossom, tuberose and Sambac jasmine, while the base contains white musk, vanilla beans and cashmeran. 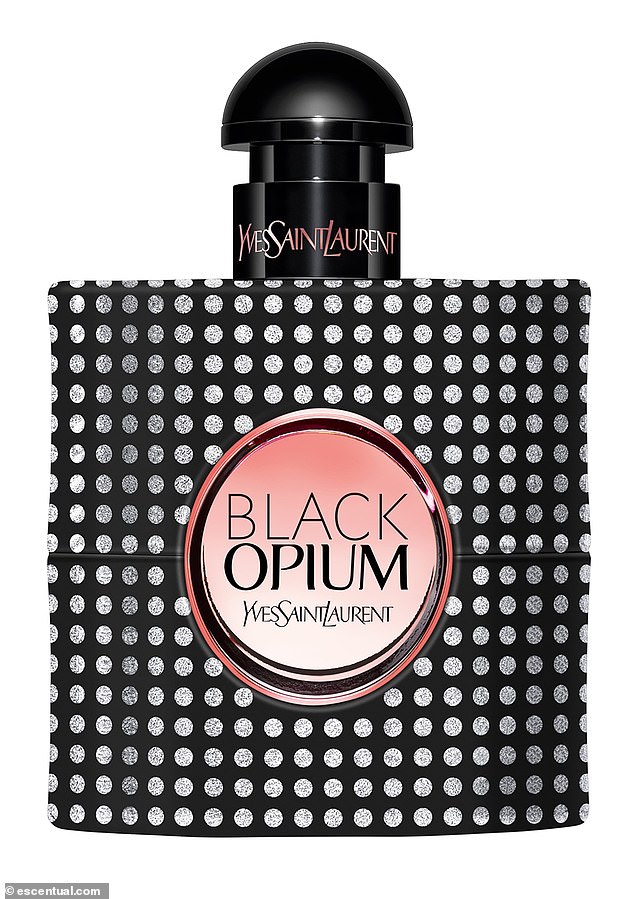 Black Opium is a dark and mysterious fragrance with black coffee accord, mandarin and bergamot as the top notes

In seventh place is Thierry Mugler Alien, which is predicted to sell £7.15million – around 114,100 bottles.

First launched in 2005 with the iconic purple bottle in the shape of a talisman, this fragrance is still hugely successful. 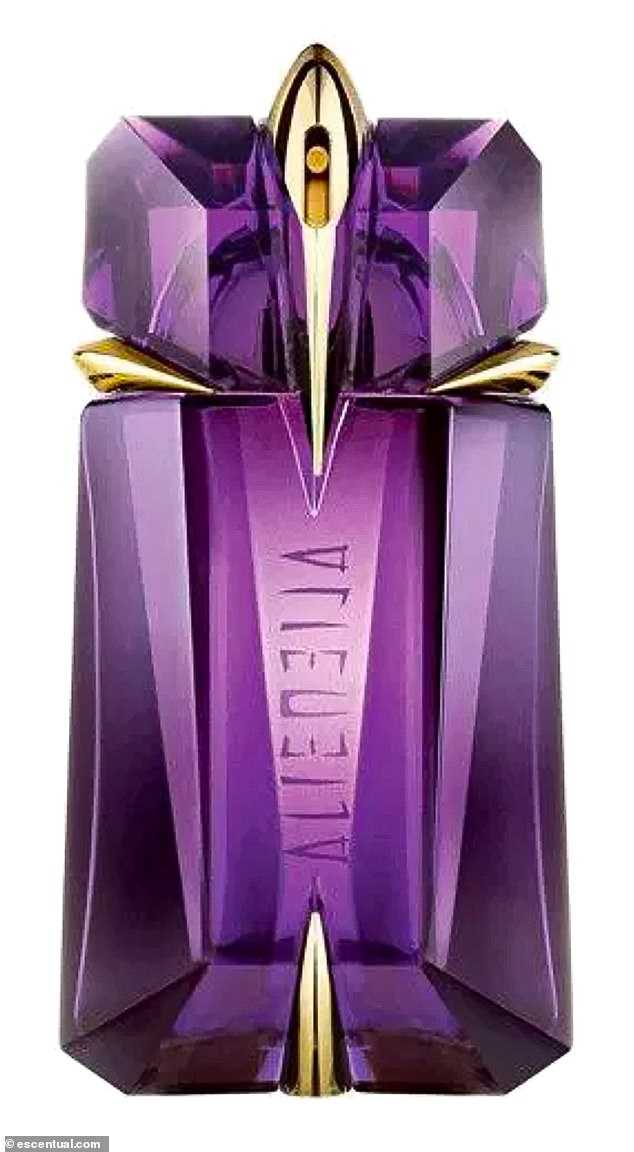 In seventh place is Thierry Mugler Alien, first launched in 2005, which is predicted to sell £7.15million – around 114,100 bottles

The fragrance was created in 1999 and has been fronted by Hollywood actress Charlize Theron for the past 15 years. 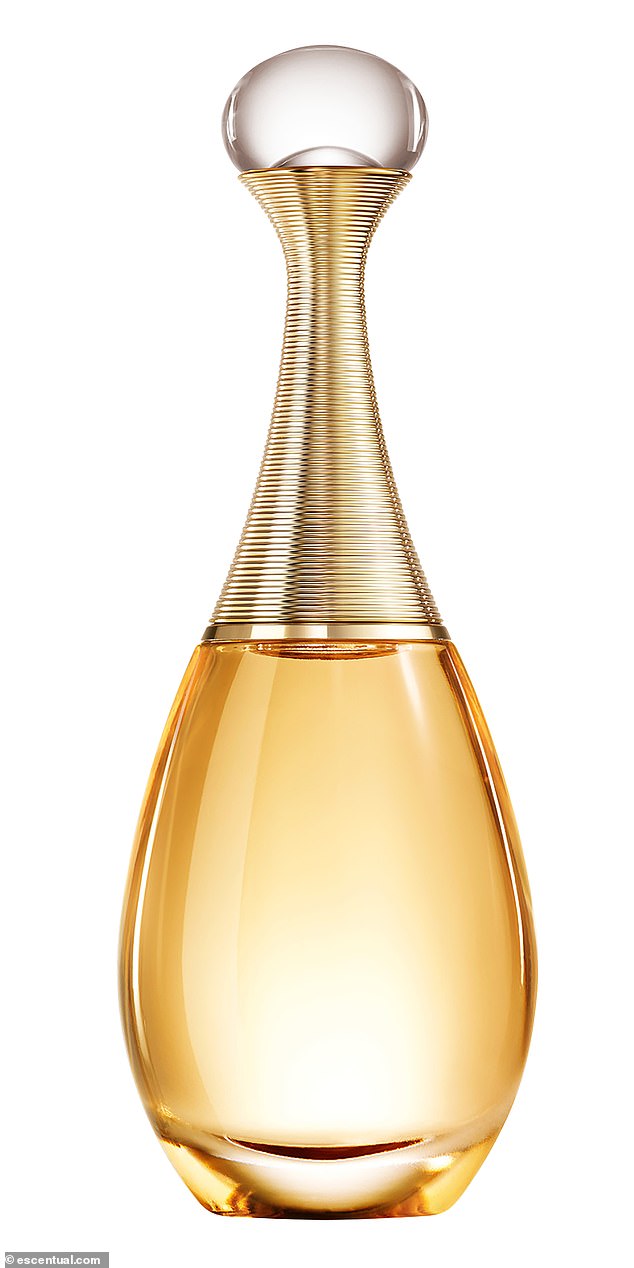 Ninth favourite is Lancome’s scent La Vie est Belle, which has been fronted by Hollywood actress Julia Roberts since 2018.

Sales are predicted to be around £6.71million this festive season – around 113,600 bottles.

The fragrance was initially launched in 2012 after three years of formulation. Iris is the key note of the perfume, surrounded by orange blossom and jasmine at the heart. There are top notes of blackcurrant and pear, and a base of tonka bean, praline, patchouli and vanilla. 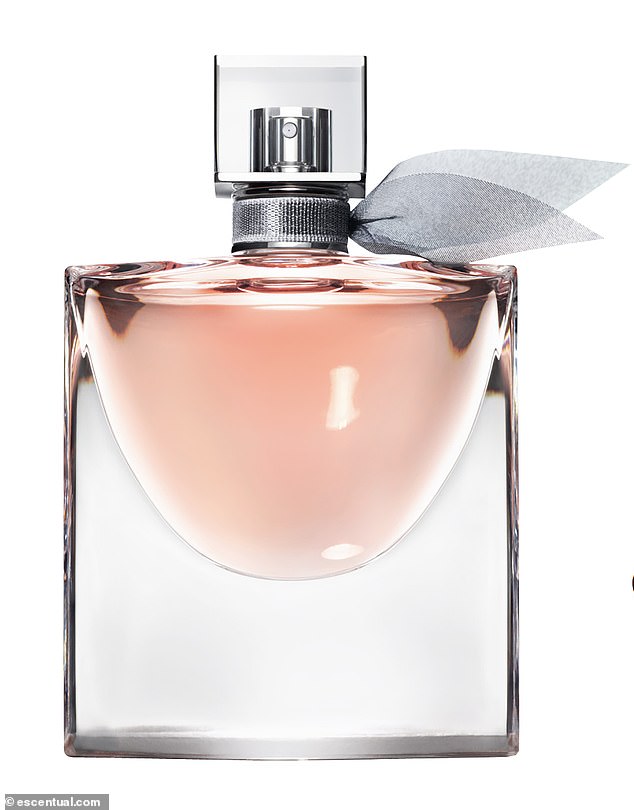 Ninth favourite is Lancome’s scent La Vie est Belle, which has been fronted by Hollywood actress Julia Roberts since 2018

It was released in 2010, two years after the successful men’s fragrance 1 Million.

Lady Million is composed of fresh floral and woody accords. Bitter orange, raspberry and neroli are the top notes, orange blossom and Arabian jasmine are at its heart, and patchouli, honey and amber make up the base. 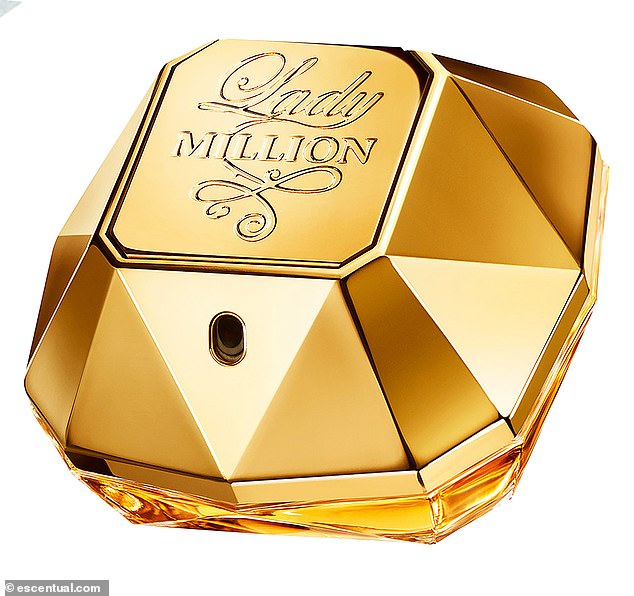 Ceryn Lawless, communications editor at online retailer Escentual.com, which collated the research, said: ‘All the indications are that this year should be a bumper year for fragrance sales.

‘October has been four per cent bigger than last year, and November is strong as well.

‘Coco Mademoiselle is without a doubt the runaway winner on sales this year – no one else is going to come close. But YSL’s newcomer Libre, which was only released this year, is already building a loyal fan base.

‘The marketing campaign with Dua Lipa has helped boost sales. Lancome Idole is also doing extremely well for a younger market with Zendaya Coleman as its brand ambassador – it’s been paying off.’