The property tycoons who are still not tackling their ‘Grenfell’ cladding

Mr Astor, 42, is Britain’s second biggest freehold investor. He and his wife Lohralee, a former model, own a £3.3million west London townhouse. They are pictured together above. His father is the fourth Viscount Astor and his half-sister is Samantha Cameron. Mr Astor is a director of Long Harbour, which manages 190,000 leasehold flats. It is linked to Adriatic Land 5, named by the Government as one of the firms that have failed to start replacing the Grenfell-style cladding

A member of David Cameron’s family and a multi-millionaire Tory party donor are linked to firms which are yet to strip Grenfell-style cladding from high-rise buildings, the Daily Mail can reveal.

Britain’s biggest freehold investors are implicated by a Government list shaming companies that have yet to start removing deadly cladding from fire-trap flats.

It comes after the owners of a London tower block were blasted for failing to replace cladding before a fire left 44 people needing treatment this month.

Work has been completed on just 247 of 469 buildings with Grenfell-style ACM cladding almost four years after the west London tower blaze claimed 72 lives. Repairs have yet to begin on 43.

To speed up the process, the Government has started releasing a monthly list of landlords that have yet to start work.

One has links with property mogul and Tory party donor Vincent Tchenguiz.

Tory MP Sir Peter Bottomley said bosses ‘should be ashamed’. He added: ‘The largest groups should have acted first. They have left leaseholders in homes which are unsafe and unsellable.

‘They are open to the accusation that they take every pound they can from leaseholders. They now appear to be holding back on using money in a responsible, necessary way. 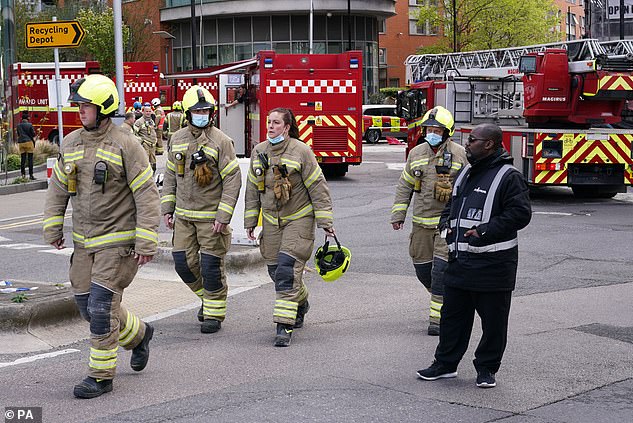 The owners of a London tower block were blasted for failing to replace cladding before a fire left 44 people needing treatment this month. Firefighters are seen above at the scene

‘The Prime Minister should order them to answer publicly for their failures.’

The Daily Mail is campaigning to make all homes safe by June 2022.

Ministers have been locked in an ongoing struggle with some freeholders who refuse to take charge of repairs. Owners are responsible for building safety but leaseholders are liable for costs.

Complex ownership structures and low public profiles of these firms mean pleas to start work without passing costs on to leaseholders have had little effect.

It has caused delays and left leaseholders liable for bills of up to £150,000 each.

Earlier this month a fire ripped through three storeys of an east London block at New Providence Wharf, where ACM cladding was due to start being removed three days later.

The owner, Ballymore, which made £97million profit last year, was previously on the list. Ballymore said cladding played ‘no part in the blaze’.

Cameron’s relative and a Tory donor

From a family worth £250million, Mr Astor, 42, is Britain’s second biggest freehold investor.

He and his wife Lohralee, a former model, own a £3.3million west London townhouse.

His father is the fourth Viscount Astor and his half-sister is Samantha Cameron.

Mr Astor is a director of Long Harbour, which manages 190,000 leasehold flats.

It is linked to Adriatic Land 5, named by the Government as one of the firms that have failed to start replacing the Grenfell-style cladding.

A spokesman for HomeGround, which acts on behalf of Adriatic Land 5, said the firm bought the building in question in 2017 but ACM cladding was only identified last September.

The spokesman refused to identify the building but added that work is expected to begin in the summer and the firm is ‘moving quickly’ to make buildings safe.

The British-Iranian multimillionaire, 64, and his family have donated more than £120,000 to the Tories. Mr Tchenguiz, the UK’s biggest freehold investor, is linked to the firm Rockwell (FC100), which has also been shamed by the Government.

All three also work for CBG and are paid by another of Mr Tchenguiz’s companies, Fairhold Services Ltd. Rockwell is registered at the same address in Finchley, north London, as E&M.

Mr Tchenguiz does not directly own Rockwell and is not involved in the running of the buildings or removal of cladding.

An E&M spokesman said the development owned by Rockwell, which it declined to identify, was only bought recently and works are now expected to start by September. Works have started on three other developments.

It has collective investments of more than £5billion. One of the firms named is Peel Media, part of Peel L&P, whose parent company is Peel Group, of which Mr Whittaker is chairman.

A Peel Media spokesman said the building is White Tower, a hotel and office block in MediaCity, Manchester, where work is due to start from June 1.

He said repairs had been prioritised on two residential towers ‘due to logistics and the resources available’.

The spokesman added that the Government was ‘satisfied with our phased approach’ and Peel Media remains committed to a timely completion of the replacement of ACM cladding.

The millionaire property developer, 49, is co-director of Betterpride Ltd, a firm named by the Government. The building is Premier House in Edgware, London.

Delays have been caused by a £1million shortfall in Government funding, which has run into trouble as three landlords own 30 flats in the building and EU rules prevent any individual receiving more than £171,000 in state aid.

Betterpride has proposed making up the shortfall by adding three storeys, with profits used to forward fund works.

A Betterpride spokesman said removing the Premier House cladding has been its ‘top priority’ since it was bought in 2016. He added the cladding had been installed by the developer prior to the sale.

Betterpride said it is working with the Government ‘to resolve the issue created by European state aid rules’ and is ‘intent on having the cladding removed as quickly as possible’.

Jersey-based Rocquefort was named on the list for not starting to replace cladding. Mr Kennedy said work to remove cladding had been delayed as the managing agents had not advised the freeholder that Government funds were available and failed to request building surveys.