The Queen could not stop smiling as she enjoyed another day at the Royal Windsor Horse Show this morning.

Her majesty, 93, looked relaxed and carefree as she inspected some of the horses and checked the programme.

The annual show, which is just a short distance from Windsor Castle and runs until 12th May, is one of the Monarch’s favourite equestrian events of the year.

Elizabeth II, who became a great-grandmother again on Monday to Prince Harry’s baby boy Archie, drove herself to the event in her black Range Rover.

Her husband Prince Philip, 97, gave up his driving licence earlier this year after overturning his Land Rover in a collision with another car near the Sandringham estate.

Also in attendance was Princess Anne, who looked smart in a grey skirt suit, teamed with a turquoise silk shirt and a gold horse brooch.

In the driving seat! The Queen drove herself in her Land Rover as she arrived at one of her favourite events of the year, the Royal Windsor Horse Show 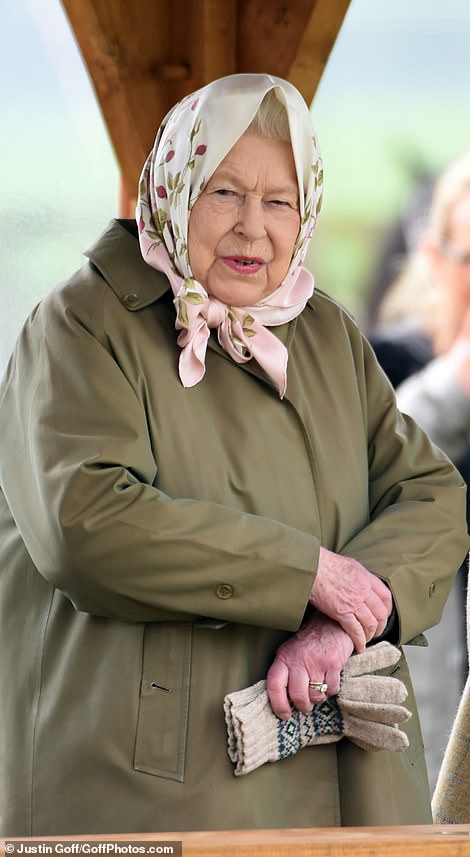 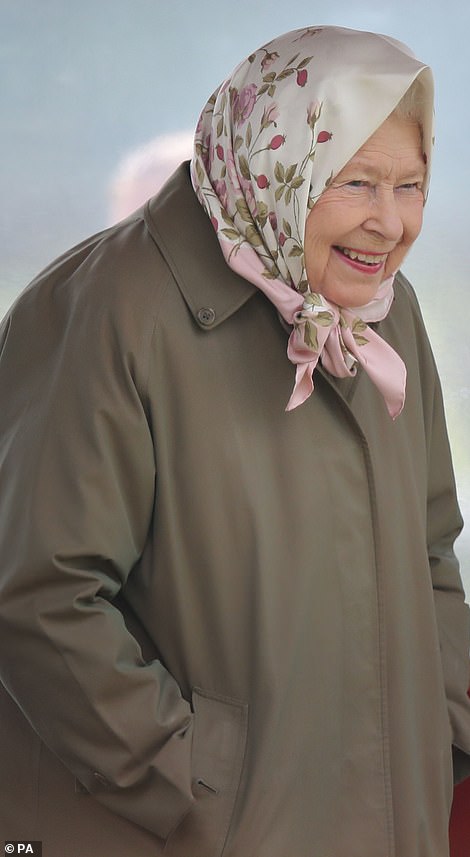 The monarch wisely brought along a pair of patterned gloves to keep warm on the chilly spring afternoon (left). The Queen could not hold back her smiles as she enjoyed the third day of the Royal Windsor Horse Show today 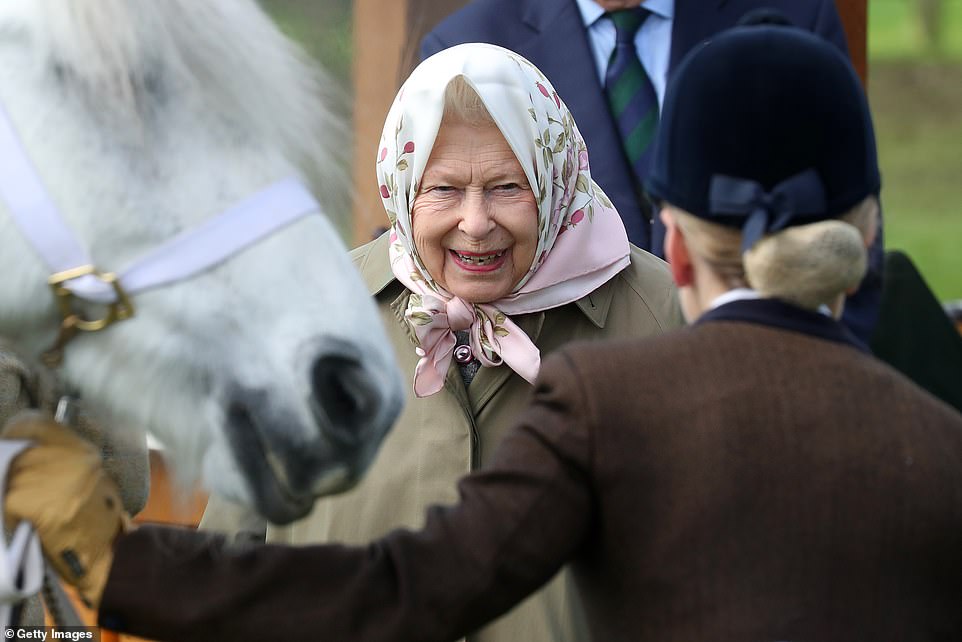 The Queen wore a sensible khaki jacket again today and paired it with black boots, perfect for the muddy conditions after yesterday’s rain.

Today the Queen wore a white floral scarf on her head which had a delicate pink pattern on it and complimented her pink lipstick.

Yesterday Lady Louise Windsor stole the show as she competed at Horse Show.

Lady Louise, 15, is an accomplished equestrian and took part in the Private Driving Singles carriage drive, watched by her proud mother, Sophie. 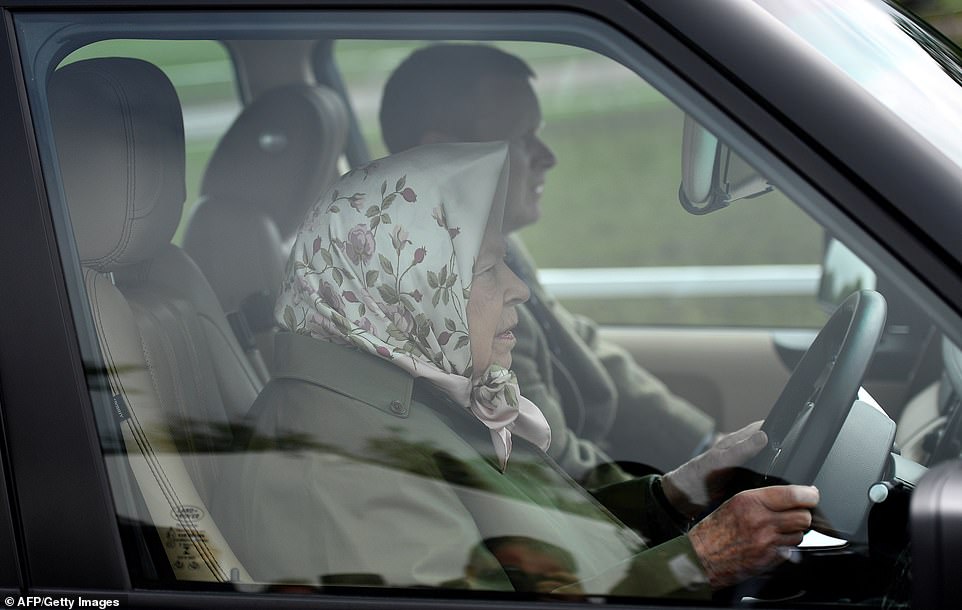 Queen Elizabeth, 93, pictured, drove herself to the trials and arrived in her black Range Rover 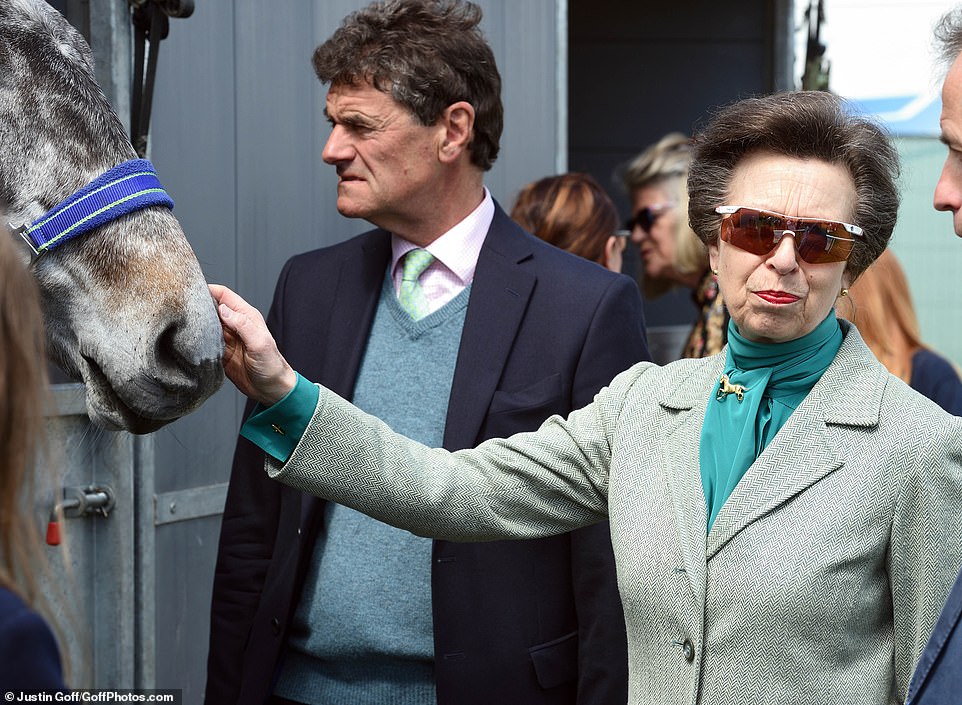 Princess Anne, who is a lifelong equestrian fan and horsewoman, joined her mother at the Royal Windsor Horse Show, which is one of the favourite events of the year in the royals’ calendar 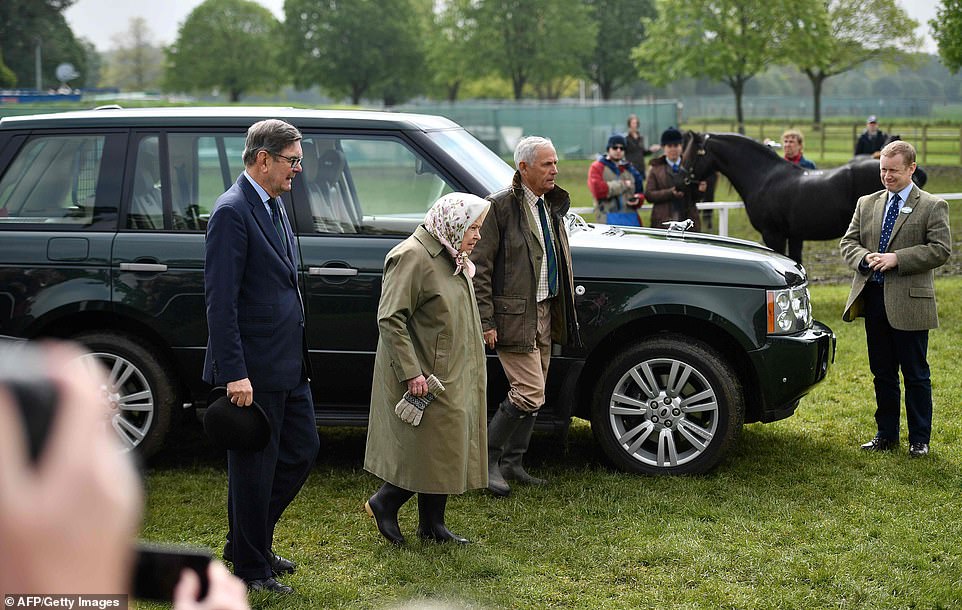 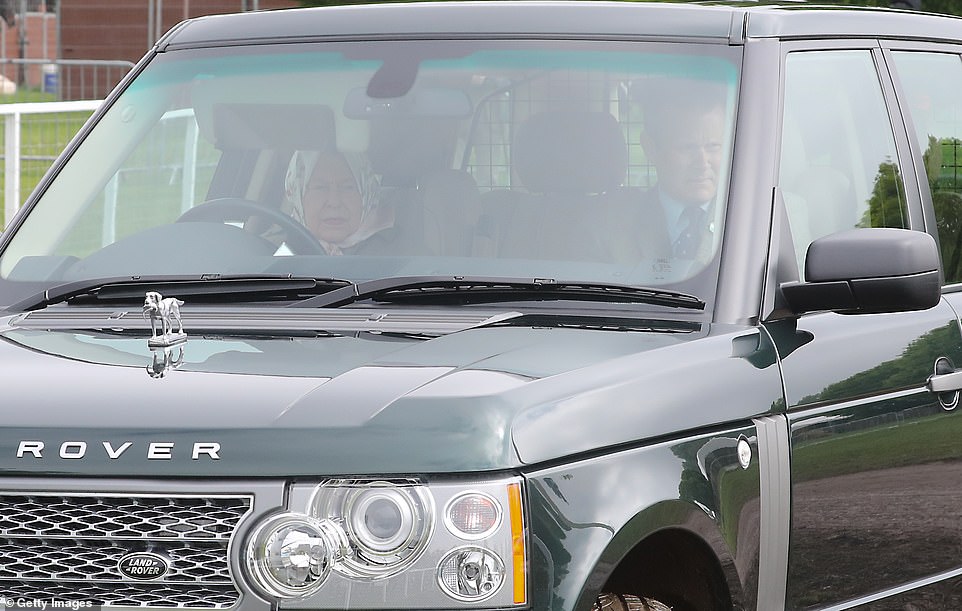 Queen Elizabeth, pictured, was seen driving herself to the popular event today 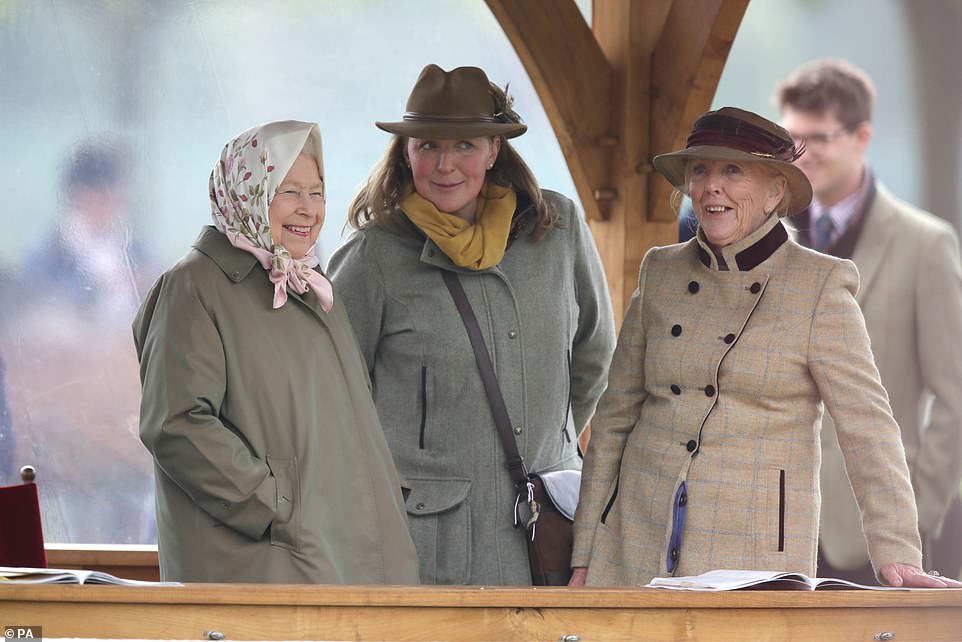 The Queen laughed and smiled with others at the trials today. The Queen is believed to have attended every single year since it began as a wartime fundraising event back in 1943 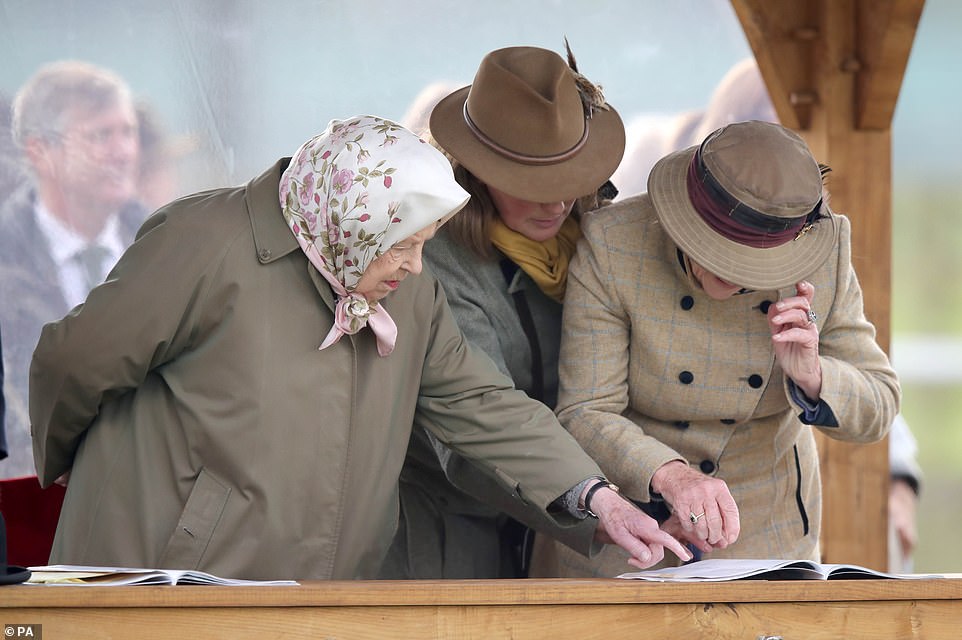 The teenager is an avid rider who was taught at a young age, and has inherited a love of carriage driving from her grandfather, Prince Philip.

In May 2017, she was responsible for leading the carriages of the Champagne Laurent-Perrier Meet of the British Driving Society at the Windsor Horse Show.

The Duke of Edinburgh himself, 97, made his way to the show in a two-horse carriage, accompanied by two aides.

On Wednesday the Queen wrapped up warm and brightened up an otherwise rainy day with her beaming smiles. 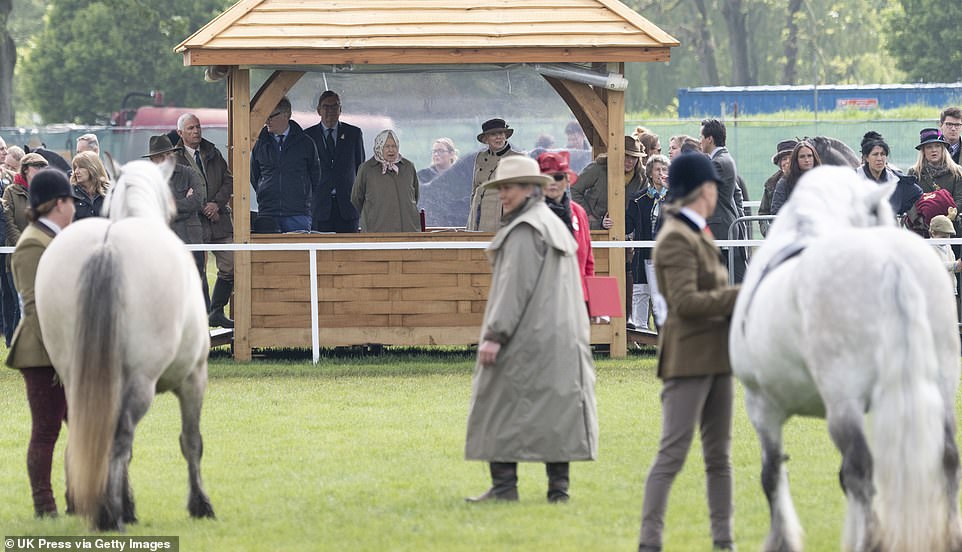 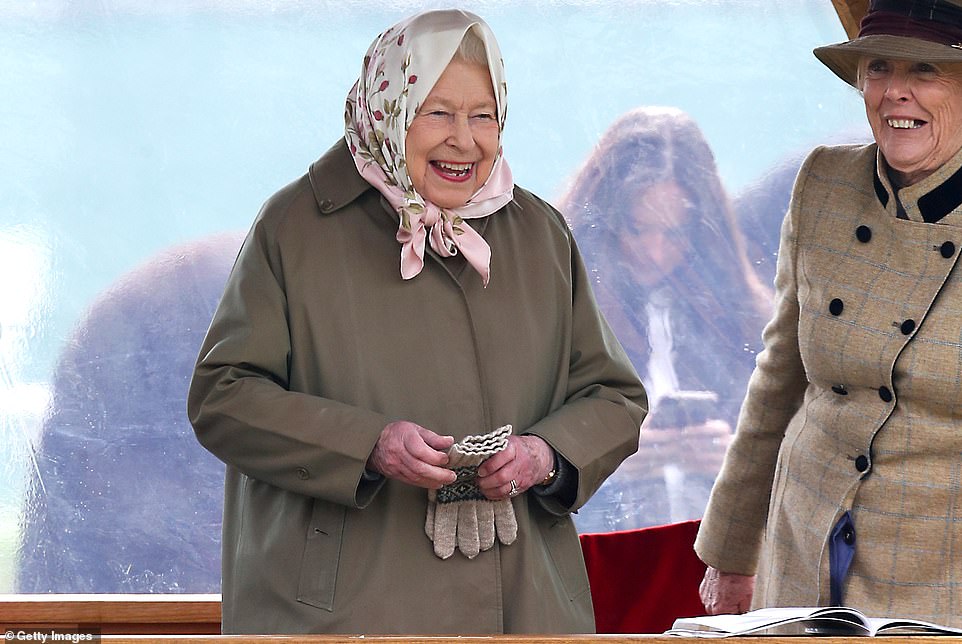 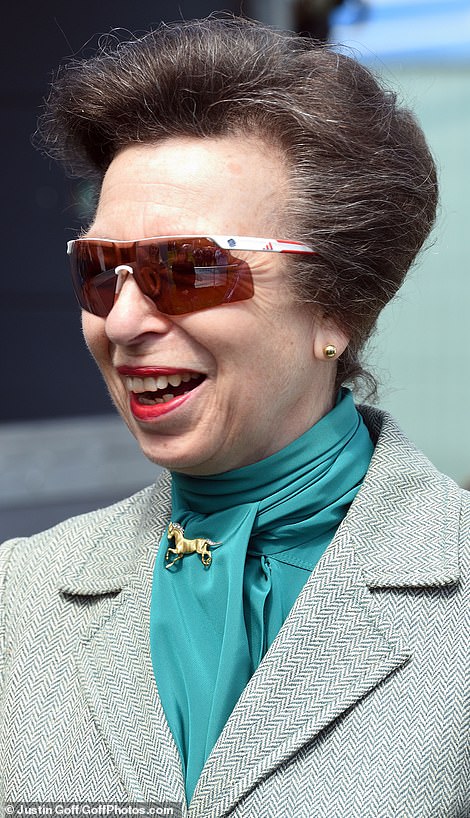 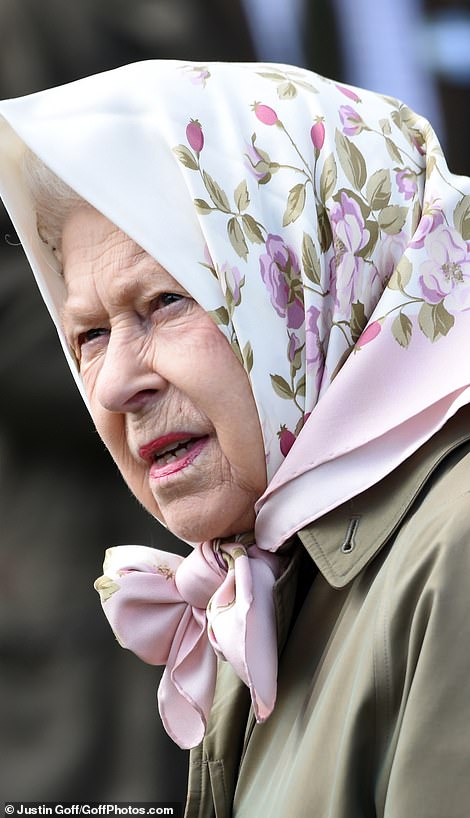 Princess Anne was also in attendance, and was picture-perfect for the event by pinning a gold equestrian brooch to her silk shirt (left). Her majesty tied a white and pink floral scarf around her head to keep off the chill today which complemented her lipstick 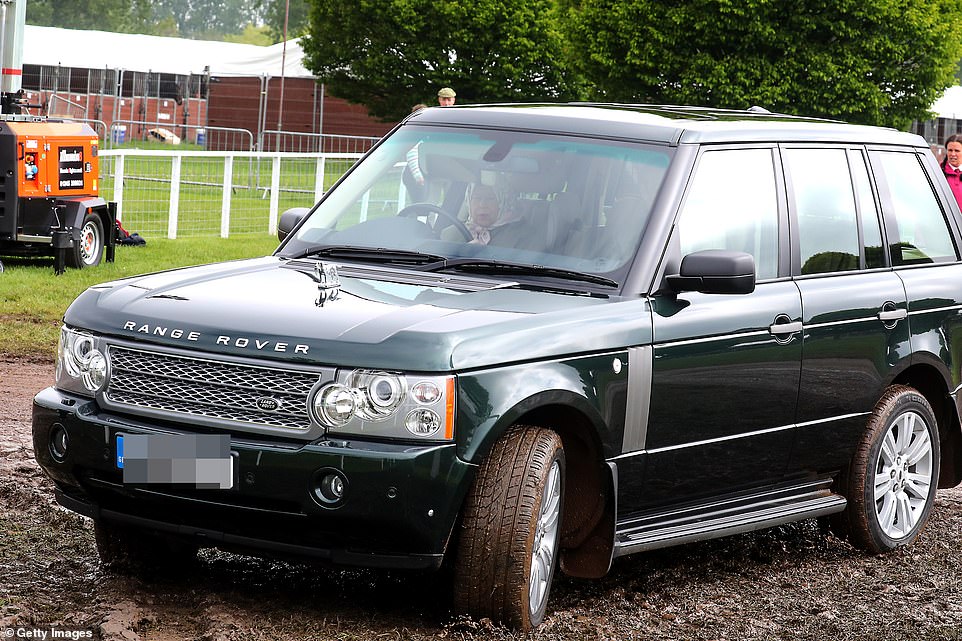 Mind the mud, ma’am! The Queen expertly navigated some muddy terrain behind the wheel of her Range Rover

She wore her khaki jacket to keep off the chill and a blue silk scarf which poked out from underneath the hood.

Last year, the event fell exactly a week before the royal residence hosted the wedding of the Duke and Duchess of Sussex. 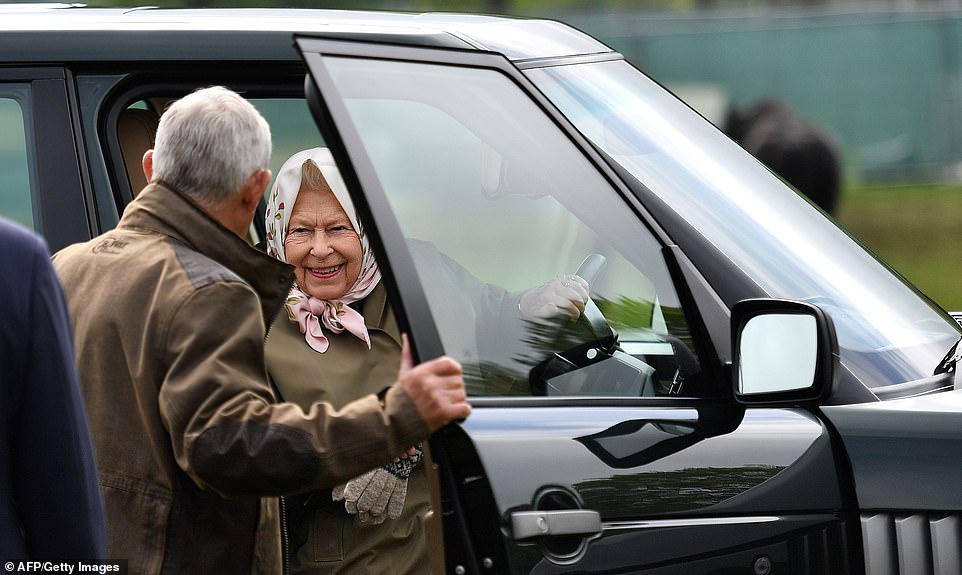 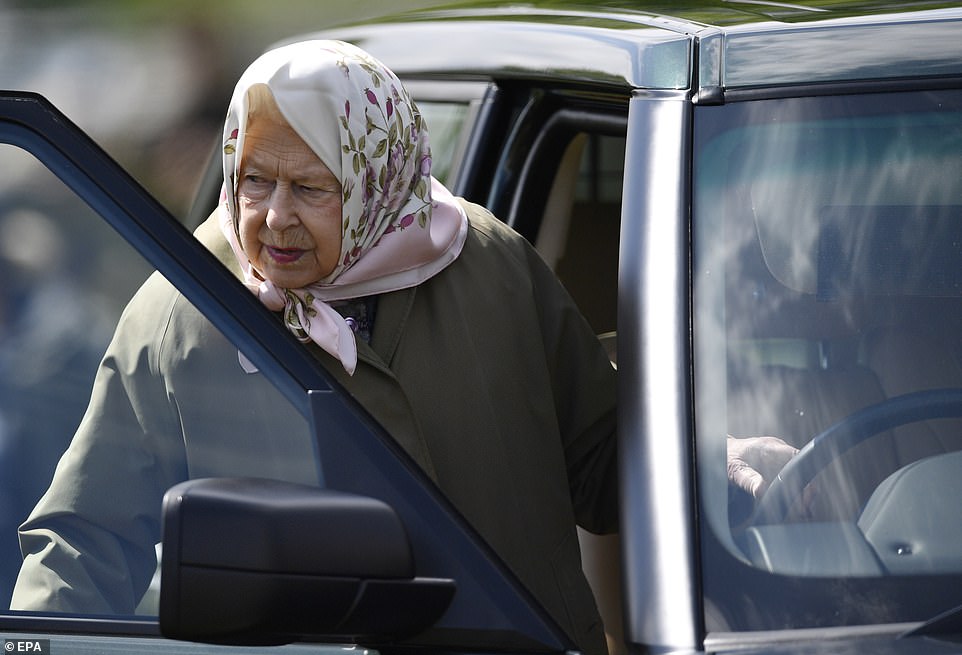 Queen Elizabeth was prepared for any weather on day three of the equestrian event with her long coat, wellies and scarf on