The race to beat prostate cancer: With test is right for you?

They’re calling it the Stephen Fry effect — the number of men having tests for prostate cancer has risen by 15 per cent since the actor revealed last year that he had the disease.

Nearly 50,000 men in the UK are diagnosed with prostate cancer annually, with more men now dying from it than women from breast cancer. Yet, when detecting prostate cancer, we still mainly rely on an ‘imperfect’ PSA blood test, introduced 30 years ago.

This measures levels of a protein known as prostate-specific antigen and, while good at picking up genuine cases of prostate cancer — detecting 83 per cent and saving lives — it can lead to false positive results: only one in four men with raised PSA is found to have cancer when a biopsy is done.

Gender gap: More than 11,800 men a year – or one every 45 minutes – are now killed by the disease in Britain, compared with about 11,400 women dying of breast cancer

‘An elevated PSA level does not necessarily indicate cancer,’ says Dr Iain Frame, director of research at Prostate Cancer UK. ‘PSA rises with age and with any disease of the prostate, including benign prostate hyperplasia [where the prostate enlarges with age] and prostatitis [infection or inflammation].’

Professor Chris Eden, a consultant urologist at Royal Surrey County Hospital, says the ‘perfect’ test for prostate cancer doesn’t yet exist. ‘This would be one that is 100 per cent specific, i.e. is only elevated in prostate cancer, and is 100 per cent sensitive — in other words, picks up every single case, as well as revealing which cancers will be so slow-growing as to not merit intervention.’

Scientists have been working on a number of replacements for the PSA test — or tests that could be used in conjunction with it to increase its accuracy, to reduce the number of needless (and uncomfortable) biopsies. Some of these new tests can also ascertain whether the disease is aggressive.

Here, we assess six of the latest ways to test for prostate cancer. Most are already available privately or are expected to be available in the next few years.

First, the man has a digital examination where the doctor massages the gland — this leads to prostate cells being shed into the urine. The cells are then analysed for PCA3. 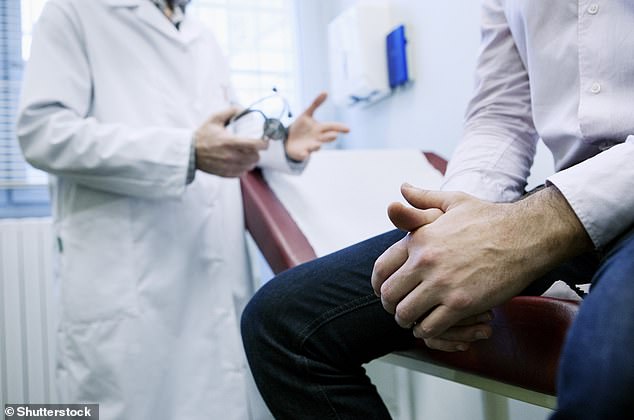 The Stephen Fry effect: The number of men having tests for prostate cancer has risen by 15 per cent since the actor revealed last year that he had the disease

Accuracy trials have been mixed. A 2014 study in the Journal of Clinical Oncology found it was more accurate at showing that someone was unlikely to have cancer, with an 88 per cent accuracy rate at predicting a negative result in men going in for a biopsy.

However, a study in the Health Technology Assessment journal in 2015 found adding PCA3 tests to existing tests, scans and clinical judgment was not cost-effective.

WHO MAY BENEFIT: Men with raised PSA levels, but where repeated biopsies show no clear results. Up to half of men who have a negative result after an initial biopsy require a repeat within five years because of lingering suspicions cancer could be present. The test is only available here privately, not on the NHS. ‘NICE assessed it in 2015 and decided against recommending it,’ says Dr Frame.

The 4K is said to be more accurate at identifying prostate cancer than the PSA. A study published in 2014 in the journal European Urology showed it had an 83 per cent accuracy for predicting cancer — compared with 68 per cent for the PSA test.

The 4K Score Test predicts the disease’s aggressiveness, too. It checks the levels of four enzymes (known as prostate-specific kallikreins) produced in the healthy prostate gland and found in higher quantities when cancer is present.

The blood test results are combined with other information, such as the patient’s age, rectal examination findings and previous biopsy reports, to come up with a final percentage risk score of aggressive cancer within ten years. A 4K score of 20 per cent or more suggests a high risk of developing aggressive cancer in ten years.

WHO MAY BENEFIT: While primarily designed to detect prostate cancer in men who have never undergone a biopsy, or who have had a biopsy with no cancer detected, it may be more useful in men who’ve already been diagnosed, since it can help to predict the likelihood of whether a cancer will spread.

As Professor Eden explains: ‘My opinion is that, although it is expensive, it is a test worth doing to decide whether to remove the cancer or have active surveillance [where the patient is not treated, but monitored using PSA tests every few months and biopsies and scans when needed].

Based on the level of PSA and the presence or absence of the two genes, the test estimates a man’s chances of having cancer, from 0 to 100 per cent. A Mi-Prostate Score of ten means a 10 per cent chance of having prostate cancer.

It can also predict whether a man is likely to be diagnosed with a more aggressive form of cancer when they undergo a biopsy. 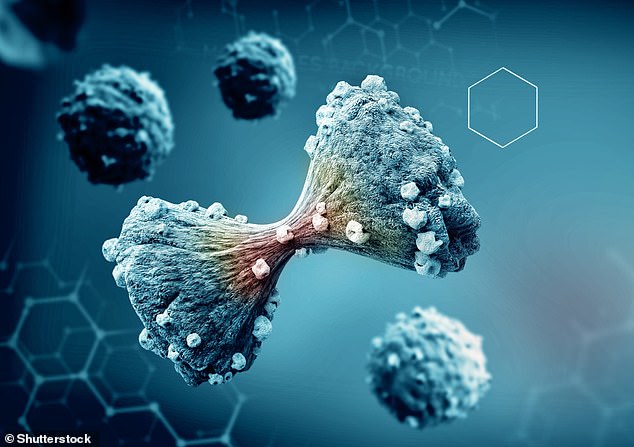 Despite being Britain’s biggest killer, prostate cancer receives less than half the research funding of breast cancer – while treatments for the disease are trailing a decade behind

A study in the journal European Urology in May 2015, which looked at around 2,000 urine samples of men undergoing biopsies because of raised PSA levels, found that the MiPS test was significantly more accurate at predicting cancer than PSA alone, as well as predicting aggressive prostate cancer that was likely to spread quickly.

WHO MAY BENEFIT: Professor Roger Kirby, medical director of The Prostate Centre in London, says the MiPS test may prove a useful tool to help men and their doctors make decisions about whether to undergo biopsies, but it’s not likely to replace PSA tests yet. ‘We must get to a point where doctors can identify and test those most likely to develop aggressive disease, while sparing others unnecessary treatment such as biopsies.

‘This test is a step forward, but isn’t designed to be a screening tool, and does not replace biopsy.’

This test is very accurate, with only about 2 to 5 per cent of cancers missed. So, if the test is negative, a patient can be 98 per cent sure he doesn’t have prostate cancer. Older tests, such as the PCA3, have a far higher chance of missing significant prostate cancer, with around 8 to 33 per cent of cases missed.

However, as with all urine tests, the results can be influenced if a man has a urinary tract infection when he gives the sample, which can irritate and inflame prostate cells and cause PSA levels to go up.

WHO MAY BENEFIT: Men who have already had a raised PSA result and want an enhanced test to see if they are at increased risk of aggressive prostate cancer. This test could help them decide about having an MRI scan or going ahead with a biopsy.

For the past six years, scientists at the University of Surrey have been working on a prostate cancer test that looks for evidence of a protein called Engrailed-2 (EN2), made only by prostate cancer cells and secreted into the urine.

The presence of EN2 in urine has been shown to be highly indicative of prostate cancer, and levels of EN2 can also predict tumour size — higher levels predict larger tumours, according to a study published in the British Journal Of Urology in 2012. This test is potentially simple enough to be done at home by mail order.

It is reliable and accurate, says Hardev Pandha, a professor of medical oncology at the University of Surrey. ‘Our studies have shown that this test is twice as good at finding prostate cancer as the standard PSA test and detects around 90 per cent of cases.

‘Only rarely did we find EN2 in the urine of men who were cancer-free. EN2 was also not detected in men who had prostatitis or benign enlargement of the prostate.’

He adds: ‘In trials of 77,000 men over five years, the test detected about 90 per cent of prostate cancers and showed when men were more at risk of metastases [where cancer has spread].’

Even if the tests do indicate that cancer might be present, the results would still need confirmation by prostate biopsy.

The test could be available privately later this year, if a study on 168 patients in several hospitals in South East England goes well.

WHO MAY BENEFIT: As well as helping to diagnose prostate cancer, this test could be used to predict tumour size in men already diagnosed and considering undergoing radical prostatectomy.

WHO MAY BENEFIT: Men in the trials so far are those scheduled for prostate biopsy anyway due to rising PSA or the results of a digital rectal examination.

In theory, this test may be useful for men who want more information to help them decide whether to go ahead with a biopsy, because it helps to distinguish between prostate cancer and benign conditions, as well as identifying patients with high-grade disease.

In a study published in the December 2017 issue of the journal European Urology, the IsoPSA test outperformed the PSA test, detecting prostate cancer more precisely. It was also able to identify patients with the more severe form.

However, the test has only been used on a small number of men, fewer than 300. And the rate of false positives is not known.

IsoPSA is not yet available outside the trials in the U.S.

It means prostate cancer is behind only lung and bowel in terms of how many people it kills in Britain. In the US, the disease kills 26,000 each year.

Despite this, it receives less than half the research funding of breast cancer – while treatments for the disease are trailing at least a decade behind.