The Radfords welcome baby number 21 but ‘supermum’ Sue, 43, says this will ‘definitely be her last’

The newest arrival, named Bonnie Raye, was born at 6.43pm on Tuesday at the Royal Lancaster Infirmary where midwives had previously delivered 14 of the family’s children.

Mrs Radford, 43, endured a 12-minute labour before giving birth to baby girl Bonnie, who weighed in at 8lb 4oz.

She was taken home to Morecambe, Lancashire on Wednesday to the delight of her family who ‘were fighting over the first cuddle’.

Mrs Radford last gave birth in September 2017 and she promised at the time that it would be her last.

However, she announced in a YouTube video from May that she was pregnant again.

Speaking to the Sun about the latest baby arrival, Mrs Radford said: ‘They were all fighting over the first cuddle. It’s such a lovely moment when you bring a newborn home and the others are all lined up ready to hold her.

‘We’ve both decided we don’t want any more. Bonnie has completed our family.’

Her husband Noel, 47, said: ‘I don’t think anyone sets out thinking they’ll have 21 children. We thought we’d have three.

‘Some people decide to stop after two or three kids. We’ve made it after 21.’

Speaking about the birth, Mrs Radford added that she thought she would’ve needed more assistance – but there hadn’t been any time. 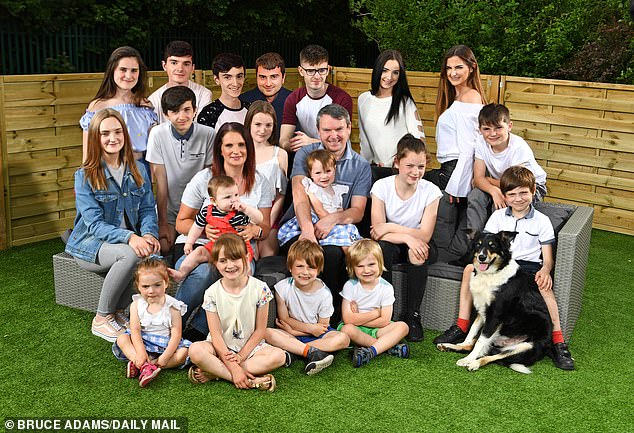 Mrs Radford last gave birth in September 2017 and she promised at the time that it would be her last – before revealing her latest pregnancy. Pictured is the family in May

She said that her other children were delighted by Bonnie’s arrival after they arrived back at the family’s ten-bedroom converted care home.

Mrs Radford has now spent a total of 811 weeks pregnant and insists that she is now ready to just enjoy her children and grandchildren.

She said that ‘it has to come to an end at some point’ and also revealed that they told midwifes not to expect them back next year.

She also admitted that she wouldn’t miss being pregnant and would now bin her maternity clothes.

The couple support themselves with their bakery and claim just child benefit. 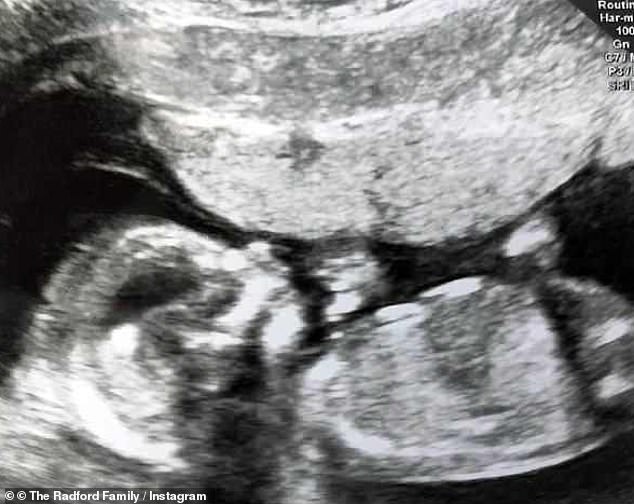 Taking to Instagram, Mrs Radford released a scan of her new baby back in May, expressing her delight

Their oldest son Christopher is now 30 and his four-day-old sister Bonnie is the aunt to his 16-month-old daughter Maisie.

Bonnie now has two other nieces as well as a nephew born to Sue and Noel’s eldest daughter, Sophie.

Mr Radford added that the family’s house is full of laughter and there is never a dull moment. He also said that he was convinced this would be their last child.

Their children, however, are not convinced.

Eldest daughter Sophie is convinced that her parents won’t stop at an odd number while Chloe says a new baby could definitely still happen. 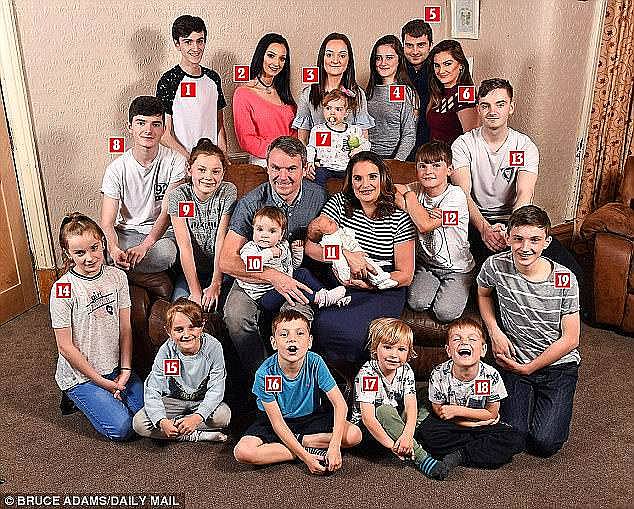 Max added that his parents say they are finished ‘every year’.

They had their first child, Chris, 28 years ago, when Sue was aged only 14. The couple decided to keep the baby as they were both given up for adoption at birth. 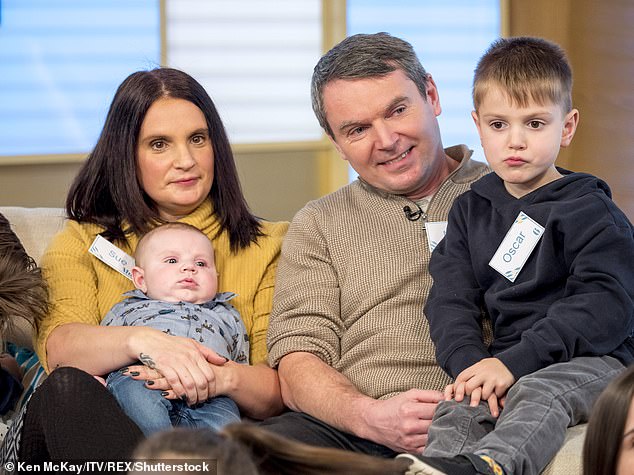 Mrs Radford and her husband Noel, 47 (pictured), had their first child, Chris, 28 years ago, when Sue was aged only 14. Also pictured are Archie and Oscar

The couple then moved into their first home together and got married. Shortly afterwards they welcomed their second child, Sophie, when Sue was 17.

Mrs Radford lost a boy, Alfie in 2014, who was stillborn, but he is still very much part of the family.

Both parents believe that Alfie has a special bond with their new child Bonnie.

A whole lot of mouths to feed! The Radford family’s budget

The couple receive £170 per week in Child Benefit and survive on Noel’s just under £50,000 salary.

They spend around £300 a week on food shopping and carefully plan their batch-cook to make sure it feeds everyone.

They have a budget of £100 for their children’s presents at birthdays, while at Christmas they set aside between £100 to £250.

In July 2016 they welcomed baby number 19, Phoebe, and well-wishers sent the couple messages to congratulate them.

The family now live in a large £240,000 Victorian house, a former care home, that they bought 11 years ago and they pride themselves on having no credit cards or finance agreements. They also enjoy a holiday abroad every year.

They spend £300 a week on food shopping, with 18 pints of milk, three litres of juice and three boxes of cereal being consumed every day.

Her husband had a vasectomy during his wife’s ninth pregnancy but had it reversed when they decided to have more children.

The following year, Mrs Radford – who does not receive state handouts apart from child benefit, lost a boy, called Alfie, when she was 23 weeks’ pregnant.