Fans of Bridgerton struggling with the wait for season two can sate their appetite for Regency romance and drama by delving into a new book that lifts the lid on the real-life locations that brought the show to life.

In Bridgerton’s England (published by Pitkin), by author and historian Antonia Hicks, the reader learns how magnificent mansions and sweeping classical landscapes were given star turns in season one of the blockbuster series, from Yorkshire’s Castle Howard to Buckinghamshire’s Stowe gardens and from Bath’s Royal Crescent to Wiltshire’s Wilton House.

Hicks links each fictional location to its real-life counterpart using insightful descriptions and stunning pictures. And here we present 10 of them. Scroll down and relive the drama…

RAF Halton in Buckinghamshire has an active military grass airfield, but within its estate, Bridgerton’s England reveals, is Halton House, a Victorian mansion created by Alfred de Rothschild in 1880.

The interior actually harks back to the 18th century and this ‘serves as… the Bridgertons’ London house, and the grand staircase with its gilded ironwork is instantly recognisable’.

The stately staircase proved to be ideal for filming scenes such as Eloise Bridgerton (above) memorably bellowing for Daphne to hurry up.

As the grounds belong to the Royal Air Force, the house is not open to the public except occasionally on open house days.

The Royal Crescent in Bath – home to the Featheringtons 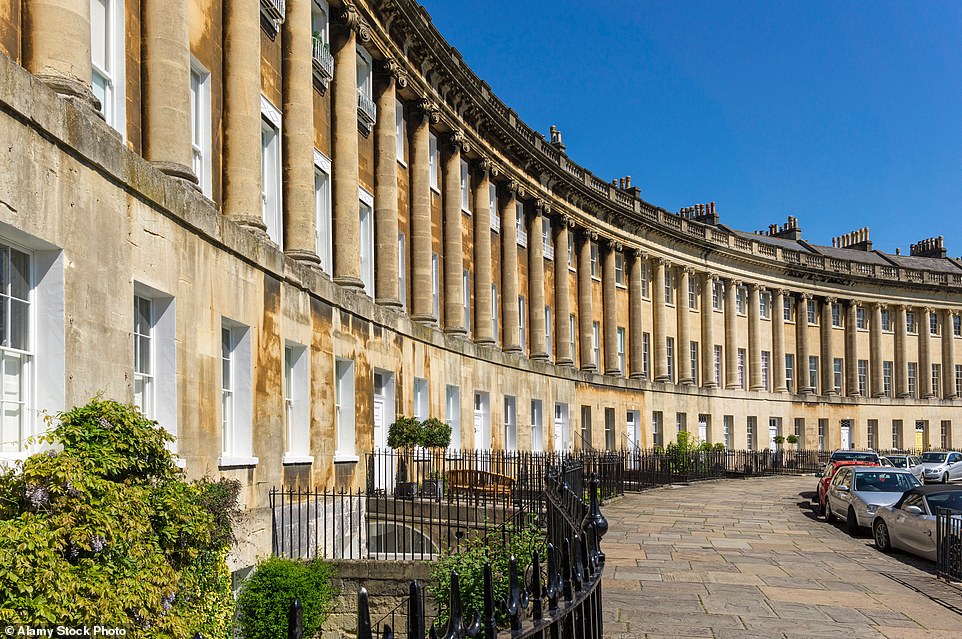 In the period drama, the Featheringtons, who come the closest to being the show’s villains, live at No.1 Royal Crescent in Bath, which became royal, the book reveals, when Prince Frederick, Duke of York and Albany, moved into No.1.

In real life, No.1 on this 18th-century street is home to a museum, ‘giving an insight into Georgian life above and below stairs’.

In Bridgerton it’s used as the exterior of the Featherington home, with Amy Frost, the museum’s curator, telling the book: ‘Knowing it was to be the Featherington’s house, we knew they would want to jazz it up a bit to suit the family, so our pale white door was painted a bold blue.’

Holburne Museum of Art, Bath – having a ball on Bridgerton 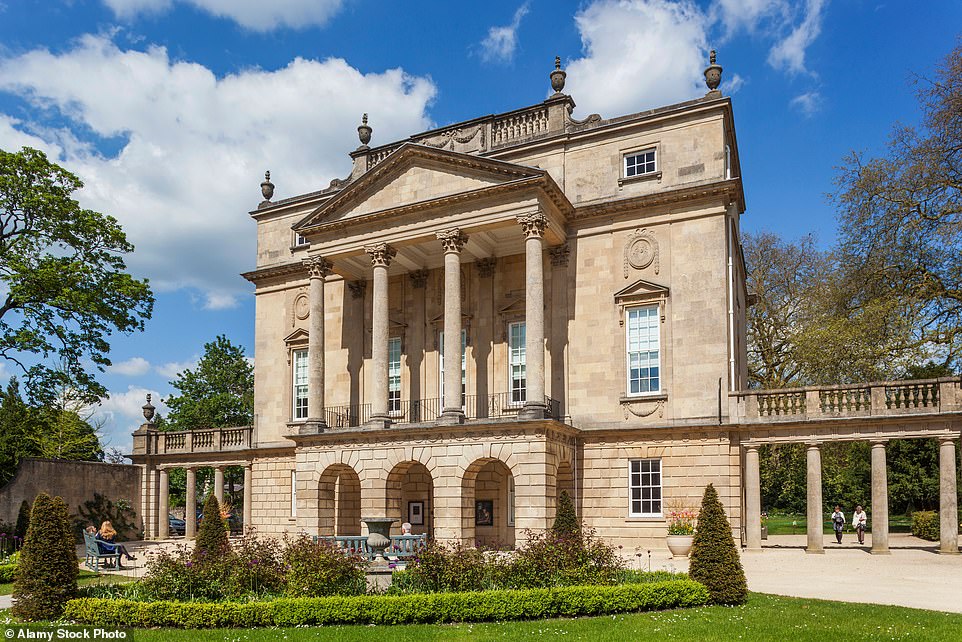 With Lady Danbury, played by Adjoa Andoh, being the life and soul of Bridgerton’s society balls, she hosts quite a few of the soirees in her lavish home. The book reveals that the filming location is in fact the prestigious Holburne Museum on Great Pulteney Street in Bath.

Revealing more on the location, Hicks writes: ‘Lady Danbury’s magnificent home started out in life as the Sydney Hotel, opened in 1799. It was built to accompany the Sydney Gardens, a smaller-scale version of the Vauxhall Pleasure Gardens, so popular in London at the time.

‘The hotel lasted until 1836, after which it became a private residence, and then, in 1916, it was purchased to house the extensive art collection of Sir William Holburne.’ Today, the museum houses over 4,000 objects from his collection. 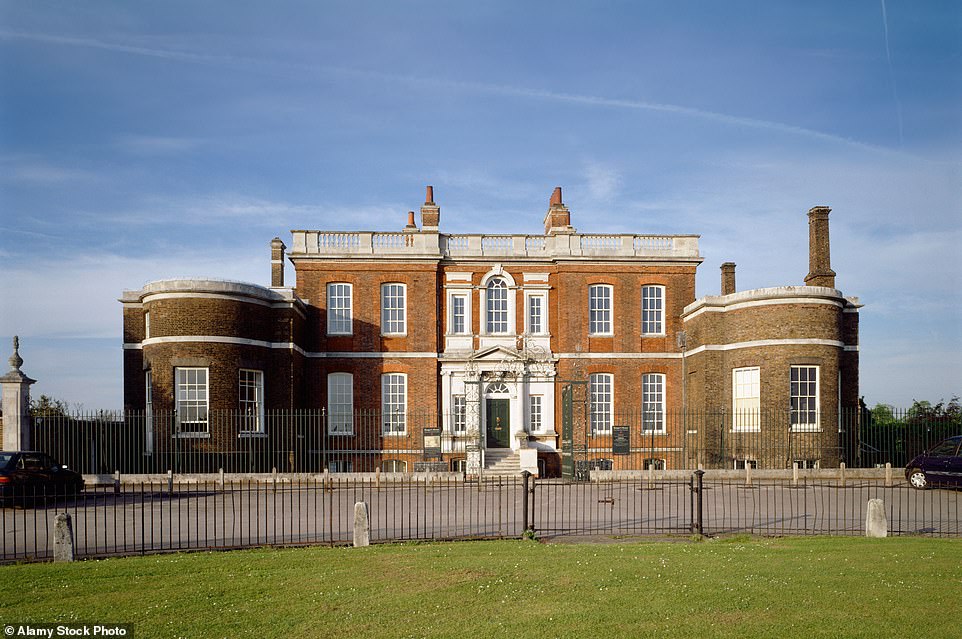 Ranger’s House in Greenwich doubles up as the Bridgerton’s family residence, but in real life is open to the public as The Wernher Collection of art treasures

Behold the Bridgerton family residence, the grand 18th-century Ranger’s House in Greenwich, London, which the book explains ‘has a strong link to the Regency – it was once occupied by the Duchess of Brunswick’.

The tome says: ‘It was in 1807 that the house became intertwined with some of the characters we see in Bridgerton. George III’s sister Augusta, Duchess of Brunswick, took possession of the house and it became known as Brunswick House.’

The house was occupied by Queen Victoria’s son Prince Albert in the late 19th century, but in 1986 it was handed down to English Heritage and is now home to The Wernher Collection of art treasures.

Actor Jonathan Bailey, who plays Lord Bridgerton, the focus of the next series, says in the book: ‘It was kind of like a really sexy school trip for about nine months. We went around these amazing National Trust sites, and filmed in places that I’d lived near in Greenwich. Rangers House was literally a four-minute walk away from where I used to live.’

Wilton House in Salisbury – the dashing Duke of Hastings’ residence 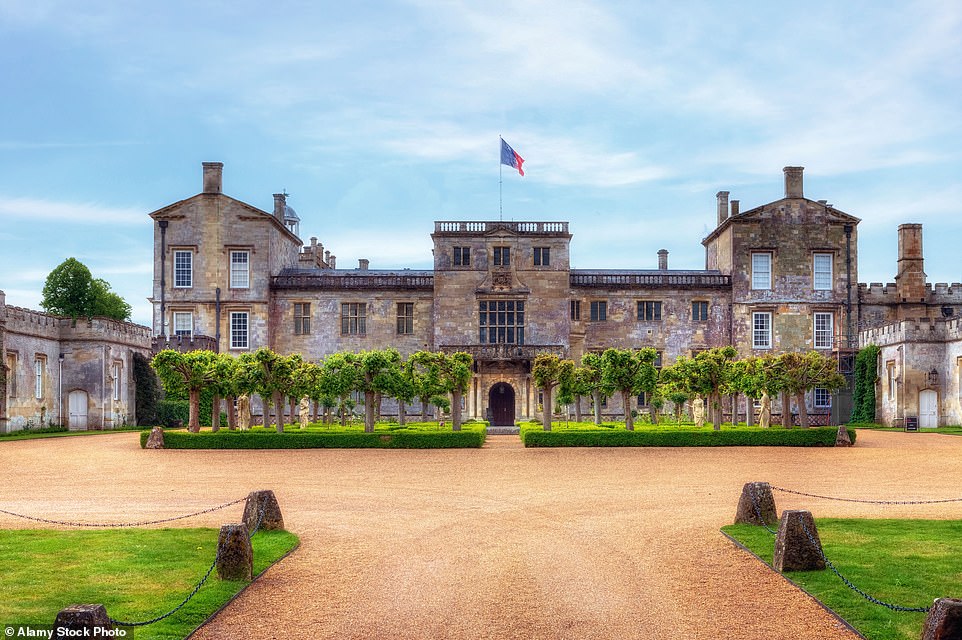 Wilton House is home to ​the 18th Earl and Countess of Pembroke, but in Bridgerton it’s the Duke of Hastings’ London home

The ‘imposing’ Wilton House outside Salisbury in Wiltshire has been the country seat of the Earls of Pembroke for over 400 years, the book explains – but in Bridgerton it serves a variety of purposes.

The ‘Double Cube Room’, the ‘great room of the house’, we learn, was used by Bridgerton for the ‘nerve-racking presentation of the debutantes to Queen Charlotte at St James’s Palace’.

It’s also the exterior of the Duke of Hastings’ London residence and is used for shots of Hyde Park. 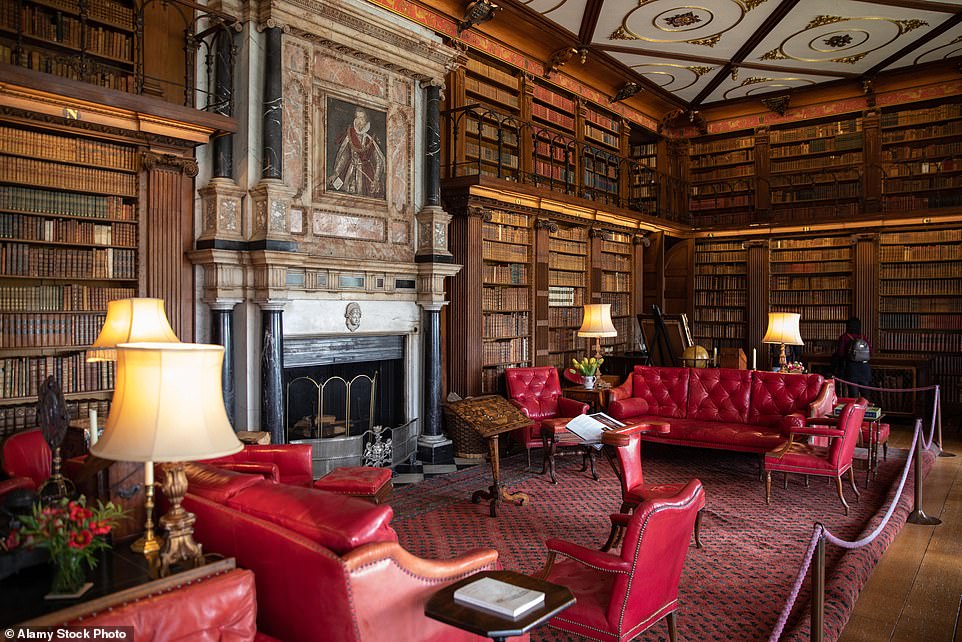 Hatfield House is the site where Elizabeth I spent her childhood. This picture shows the library, which becomes White’s Club in Bridgerton

Hatfield House, with its pristine Jacobean interiors, is a popular filming location for early period dramas including The Favourite, the Oscar-winning drama starring Olivia Coleman as a grumpy Queen Anne, the book reveals.

And it’s used for many of Bridgerton’s memorable scenes.

The tome says: ‘Apart from the home and garden of Lady Trowbridge, Hatfield House was also used for some Featherington house interiors and the Library of White’s Club [above] where Lord Featherington is regularly pursued for his gambling debts. Sadly, the maze into which Daphne runs after tearing off her diamond necklace, is not accessible to the public.’

The book also lightly delves into Hatfield House’s extraordinary history, explaining that it’s the site where Elizabeth I spent her childhood before subsequently being put under house arrest by her sister, Queen Mary. 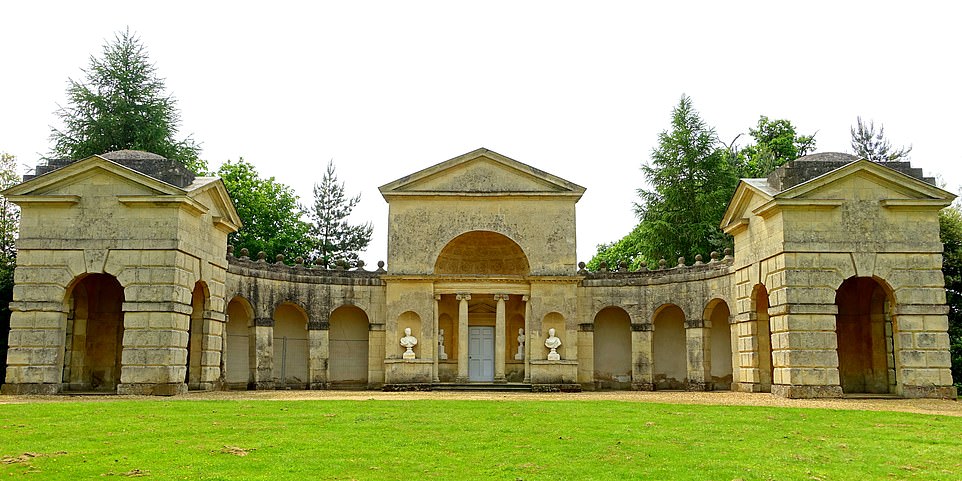 The grounds of Stowe, near Buckingham, were used to film the climax of the opening episode of Bridgerton

In the climax of the opening episode of Bridgerton we see Daphne and Simon taking to a dance floor after making a secret pact to help each other.

In the show the setting is London’s Vauxhall Pleasure Gardens, but the book reveals that the real-life location was the enchanting landscape garden at Stowe, near Buckingham, created in the 18th century by the Temple-Grenville family, the richest in England at that time.

Today, Stowe’s extensive landscape park and gardens are operated by the National Trust and open to the public. The Temple of Venus (above) is one of many garden follies at Stowe, where visitors can take a stroll down three defined paths: The Path of Vice, The Path of Virtue and the Path of Liberty. 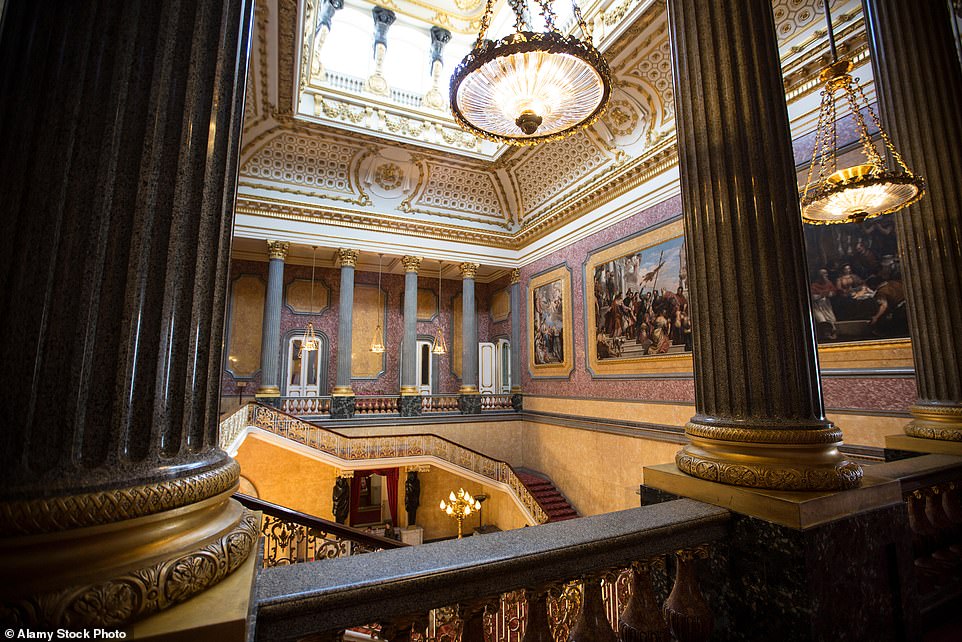 The Grand Hall and staircase of Lancaster House, which today is managed and run by the Foreign & Commonwealth Office

Directors in need of a stand-in royal palace need look no further than Lancaster House, built for the Duke of York, the second son of George III in 1825, and once the most expensive private residence in London. It’s so grand that Queen Victoria was said to have eyed it with envy, the book says.

It goes on to reveal that this epic mansion deputised for Buckingham Palace in The King’s Speech and The Crown and is used in Bridgerton to portray its London neighbour, St James’s Palace, home of Queen Charlotte.

The British government wine cellar has resided in Lancaster House since 1922, the book says, and after World War II the building was taken over by the Foreign and Commonwealth Office, which still runs it today.

Hampton Court – the opulent residence of Queen Charlotte in Bridgerton 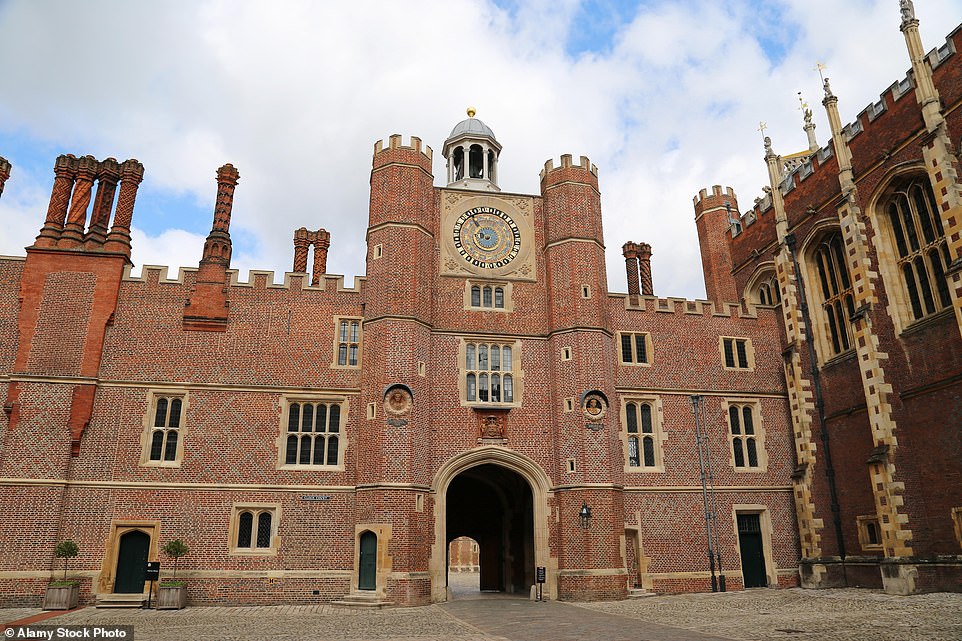 In Bridgerton, Daphne’s carriage pulls in through Anne Boleyn’s Gate, which is adorned with an ancient astrological clock

The first royal palace crops up fairly promptly in Bridgerton – and it’s Hampton Court, built in 1525 and used by Henry VIII as a pleasure palace of feasting and jousting, that gets the star turn.

Bridgerton’s England says: ‘After setting out from Grosvenor Square in episode one, Daphne’s carriage passes Buckingham Palace and pulls into a courtyard at St James’s Palace. In reality, it is the Clock Court of Hampton Court Palace near Kingston upon Thames.’

It adds: ‘Though we don’t see all of it on film, Daphne’s carriage pulls in through Anne Boleyn’s Gate, which is adorned with an ancient astrological clock.’ 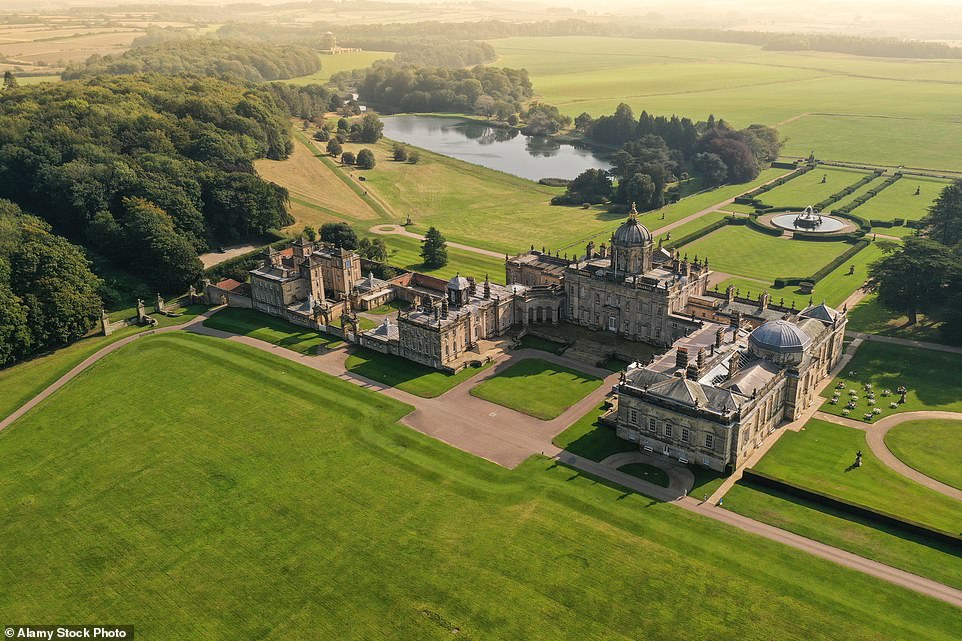 Castle Howard was built in the 17th century and was commissioned by the 3rd Earl of Carlisle in 1699. It is the setting of the Duke of Hasting’s country estate in Bridgerton

The sprawling grounds of Castle Howard, 15 miles north of York, double up as The Duke of Hastings’ country estate, Clyveden Castle.

We learn in the book: ‘When Daphne and Simon race out of the South Front at Castle Howard they head in the pouring rain to the Temple of the Four Winds. This lies at the eastern end of the Temple Terrace, with commanding views over the Northumbrian countryside.’ Like many grand garden follies of its era, Hicks says, it was designed as a place of contemplation, for reading and also to take picnics.

Castle Howard was built in the 17th century and was commissioned by the 3rd Earl of Carlisle in 1699. The book states that the earl chose an unusual architect (or surveyor as they were then known), Sir John Vanbrugh, to design his grand mansion. ‘Vanbrugh was one of Britain’s leading playwrights at the time and had never designed a building in his life,’ writes Hicks. 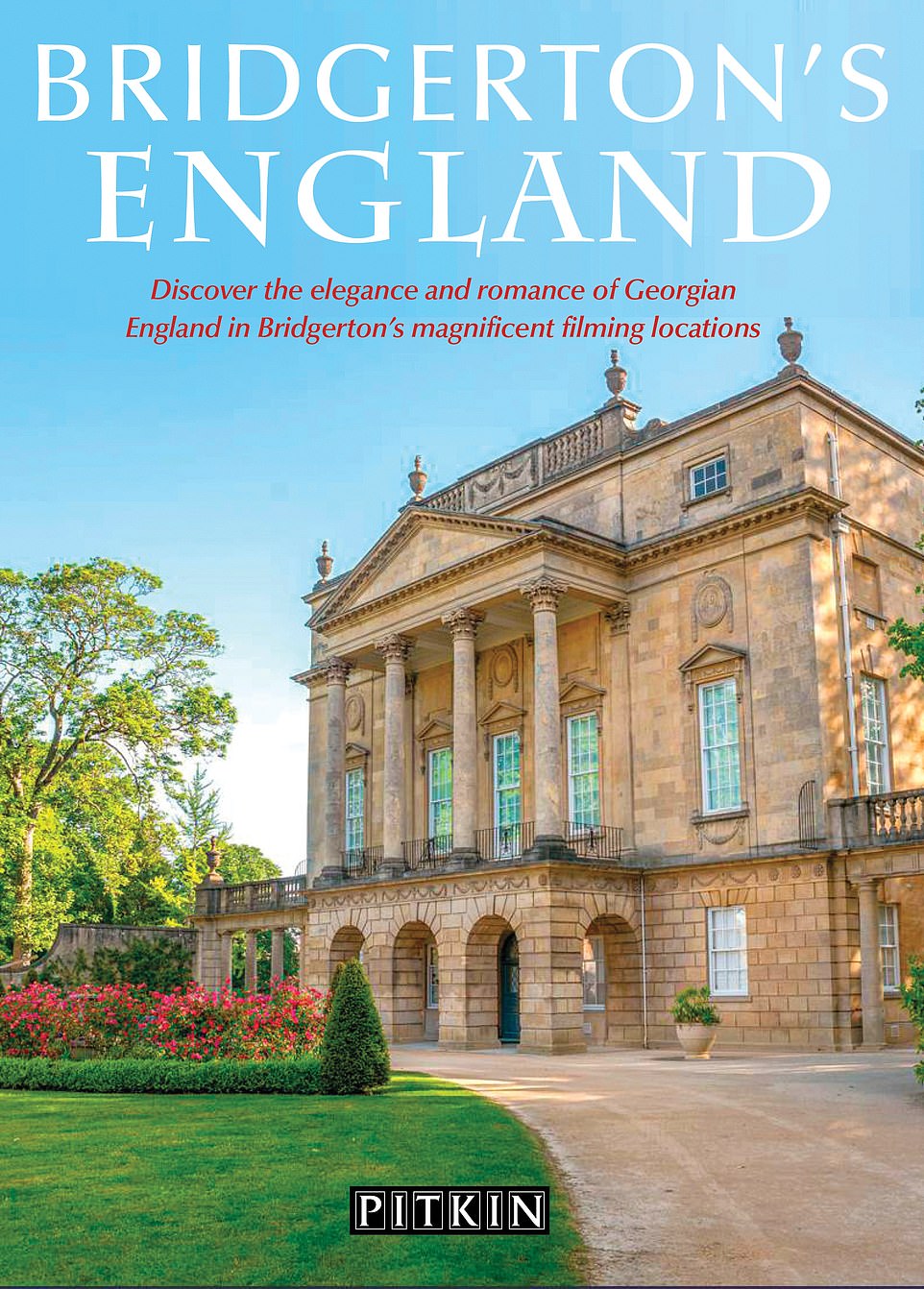 Bridgerton’s England is published by Pitkin and costs £6.99