A luxurious home situated bang in the middle of the glitz and the glamour of some of the country’s most successful footballers is struggling to sell.

The glamorous pair have been looking for a buyer for Warford Hall, which is situated in one of the most affluent neighbourhoods in the UK, Alderly Edge.

The exterior of Dawn and Ashley Ward’s mansion which has been on the market for five years, despite being in one of the most affluent areas in Cheshire 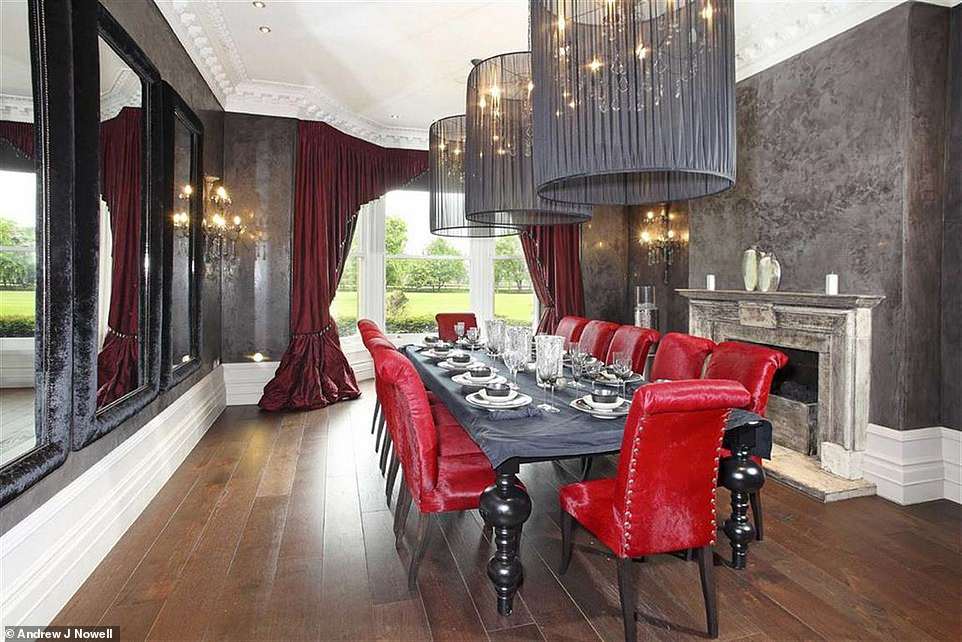 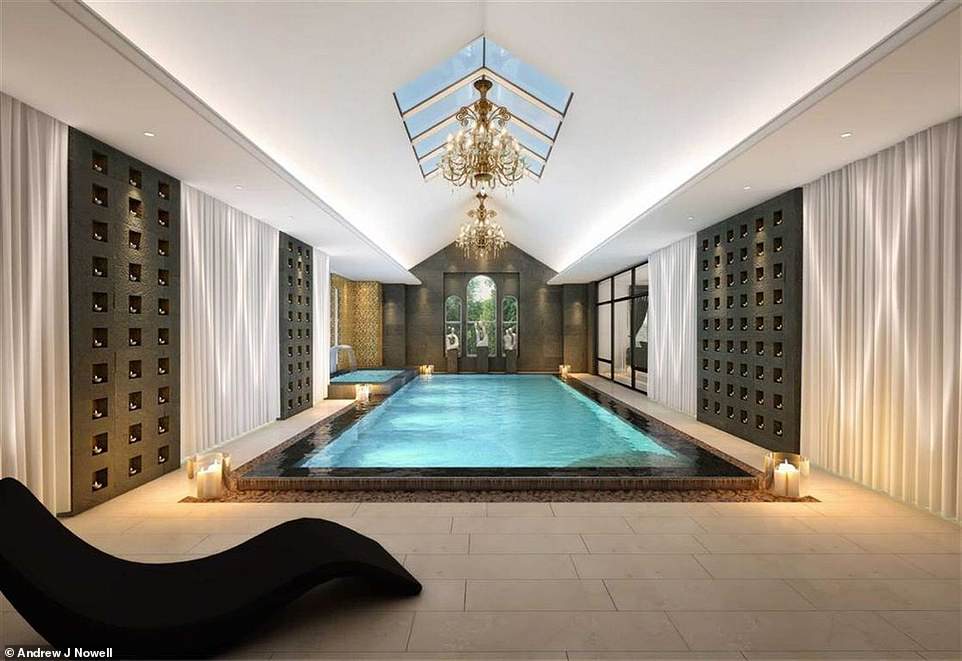 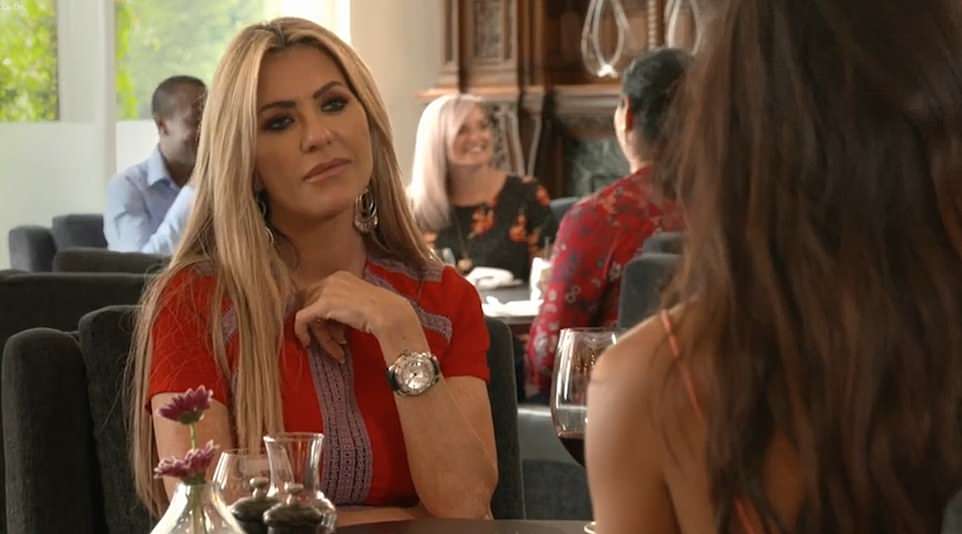 Dawn Ward (pictured) lives in the house with husband Ashley Ward and her four daughters. Dawn has become a household name since starring in the Real House Wives of Cheshire

The huge manor house was designed by W Roberts and built in 1897, using mellow Cheshire red brick and dressed with Alderly Edge stone.

The property has been on the market since 2013, the market price has not been revealed by the seller Andrew J Nowell & Company, however the property was record as being listed in 2015 for around £14.5 million in 2015, a price which has surely only increased due to the couple’s new found fame from starring in the reality show on ITV.

The couple (left) have been trying to sell the house for nearly five years. Left the pair attend the Frankie & Benny’s Parents Win awards in Liverpool, while right Dawn attends a charity event 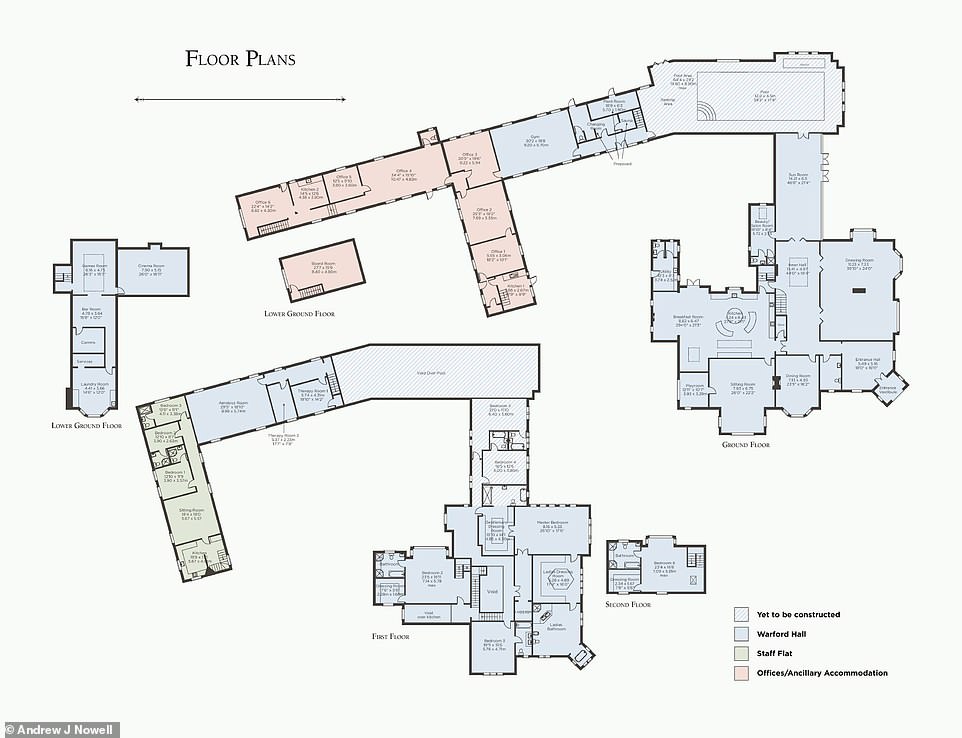 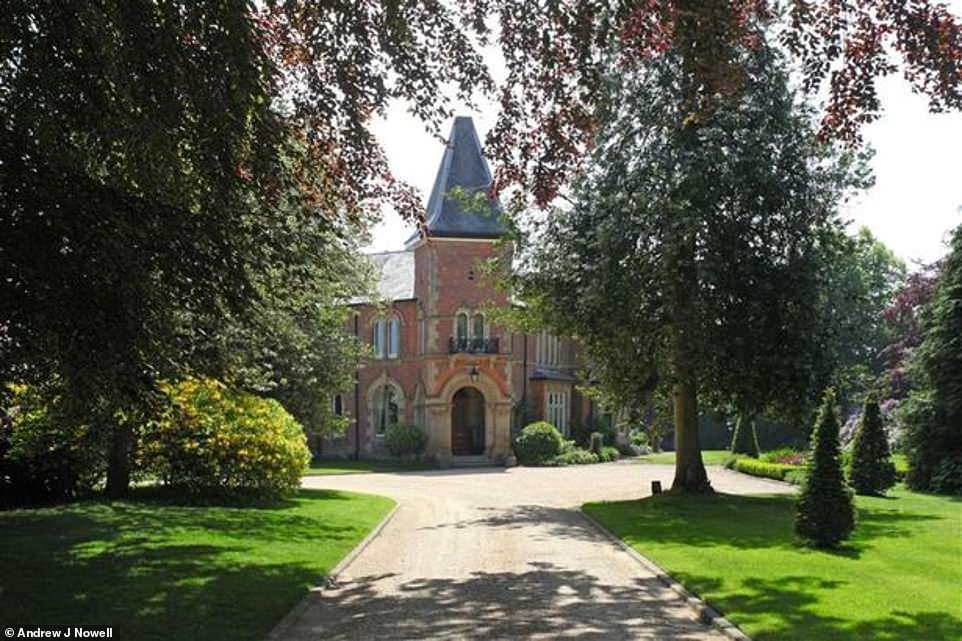 The driveway leading up to Warford Hall (pictured). The home is set in mature formal grounds and has paddocks of just over 12 acres and is within easy reach of Alderley Edge village

14 years ago the building was in a sorry state. It had housed a call centre with around 100 staff and was your typical official block, far from the lavish luxury it is now.

Despite being used as an office, the property was home to plenty of hidden gems, such as the ornate and intricate ceilings, the grand original staircase and the turreted entrance vestibule.

The size and scale of the property screams footballer’s pad and the project ahead demanded the fine eye and attention to detail of an interior designer.

When the Ward’s scooped up the property, it was clear that interior design Dawn, was set to upgrade it. 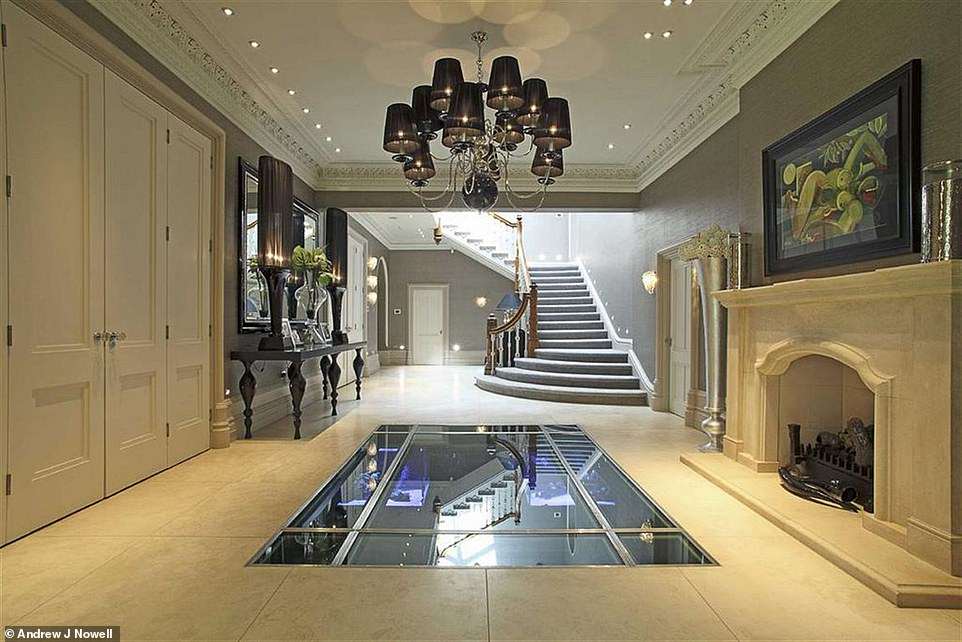 The home has been tastefully refurbished and restored with the highest quality of fittings throughout, the sale includes a substantial ground floor extension to incorporate a full leisure complex with pool 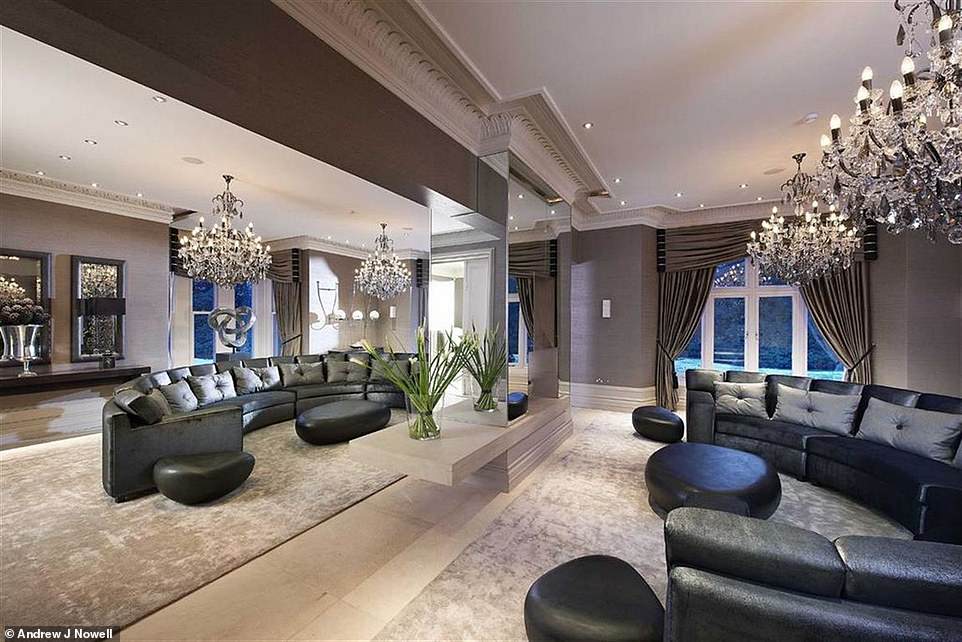 The home screams Cheshire glamour and the sitting area is complete with chandeliers, mirrors and a large sofa 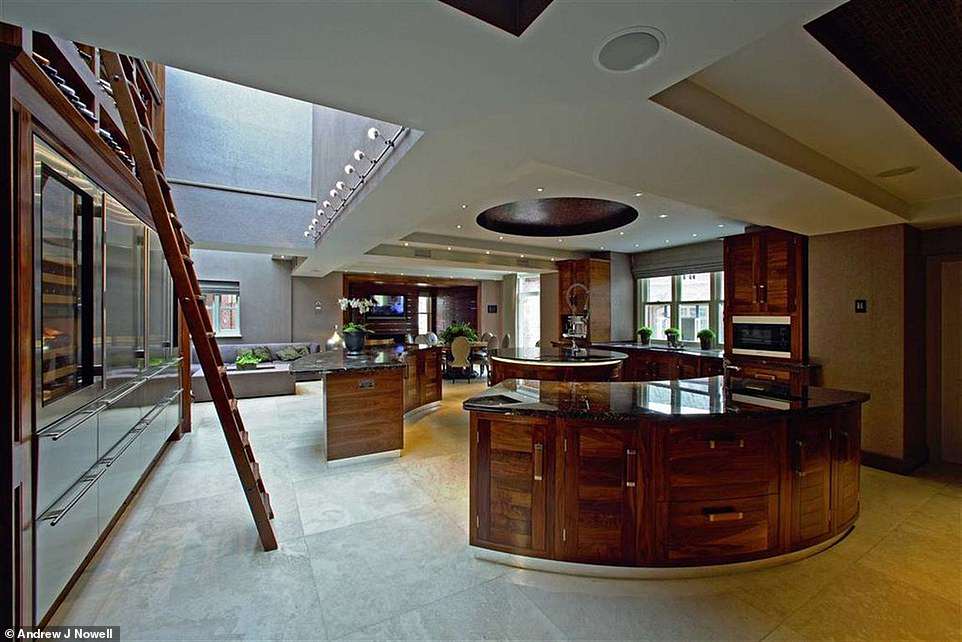 The kitchen is huge and is often featured on episodes of the Real House Wives of Cheshire, where Dawn and pals gather around the fixtures over a glass of champagne

The property has plenty of rooms to fill, and has also recently added a new salon area, staff quarters and a leisure suite. The home is pictured with grand furniture, all of which as lavish and plush as the next one.

However it’s not clear how much, if any of the furniture will be included in the sale of the home. This would however, leave a big task to the next owner of the property who would then have to kit the property out from head to toe.

Sun rooms, games rooms, drawing rooms, dining rooms, play rooms, cinema rooms, bar rooms, services rooms, changing rooms, plant rooms, even a communications room, all feature at the property, which has been described by some as a mini village. 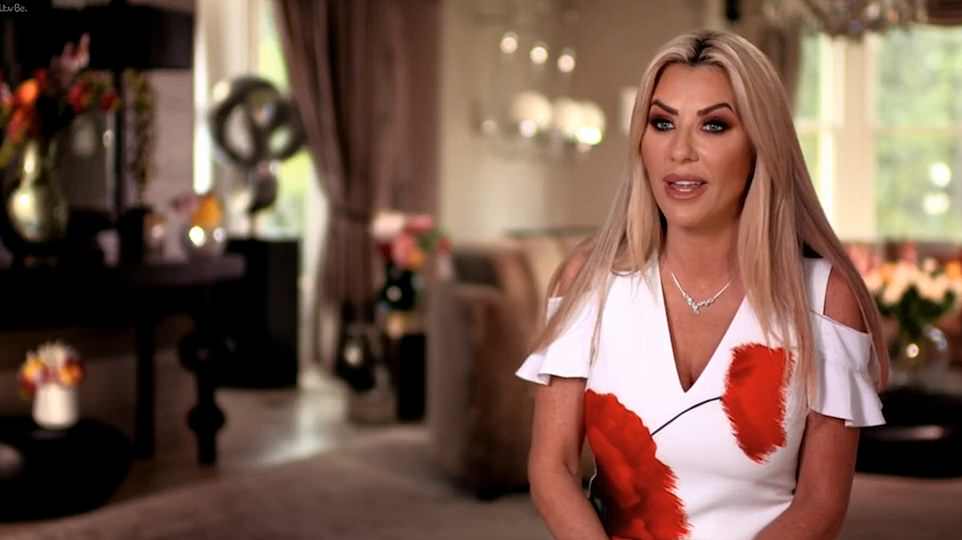 The land surrounding Warford Hall is huge and the property is the size of around eight and a half football pitches, or 12.5 acres.

Greeting guests on arrival to Warford hall is the sweeping circular staircase that which was formerly a dark and dingy stairwell into yet another drab office.

It is now a light, airy and inviting invitation to explore what lies beyond. 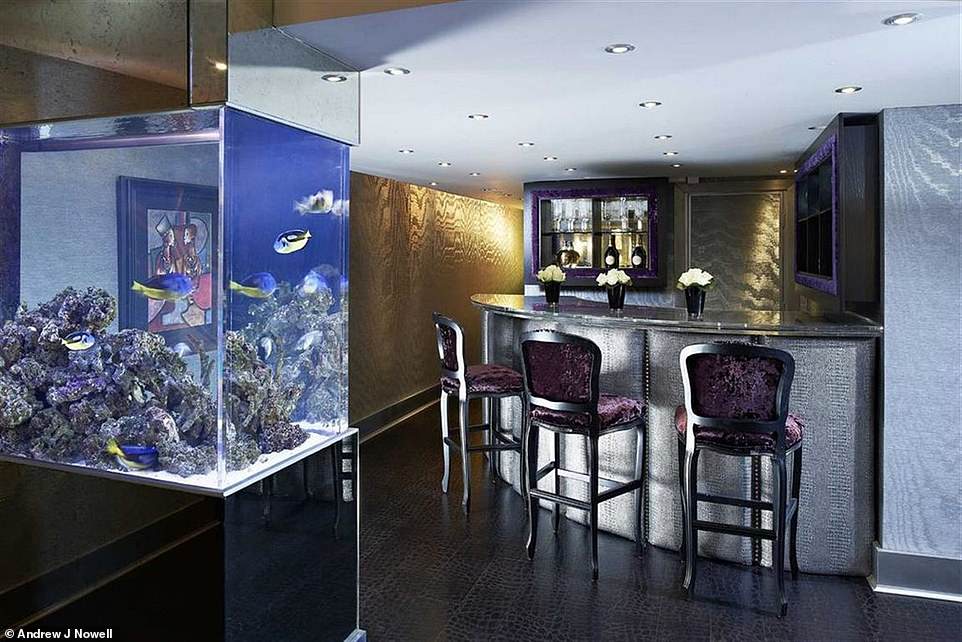 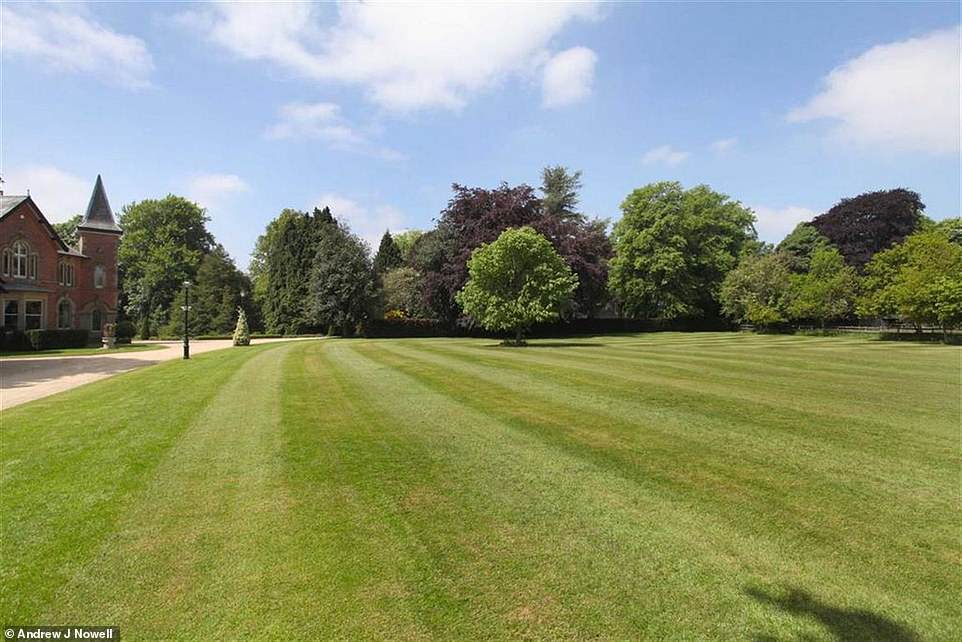 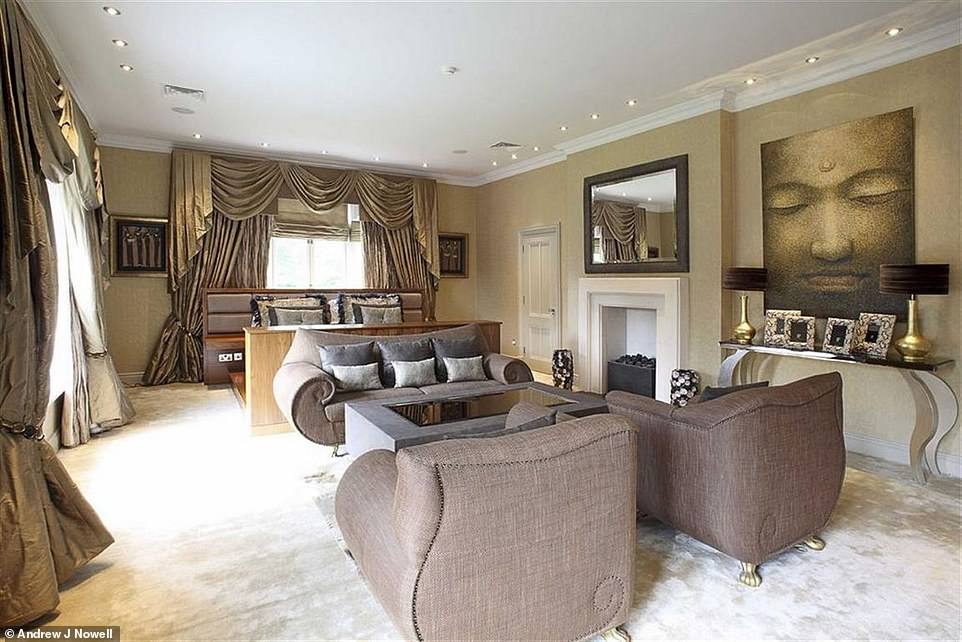 The home was renovated by interior designer Dawn and her property developer husband Ashley, a far cry from their days of modelling and playing premier league football

The kitchen has walnut fixtures and a marble floor and features a 16-rung ladder to reach the two-story wine selection and is long enough to get most homeowners up on their roof to change the TV aerial.

The dining room screams Cheshire extravagance with red leather upholstered seats sat around a table beneath vast lampshades, where Dawn has previously invited members of the Cheshire elite over for dramatic dinner parties and celebrations.

The leisure department on the lower ground floor has a billiard room with glass roof, cinema rooms with plush black leather recliners and a living marine reef tank. 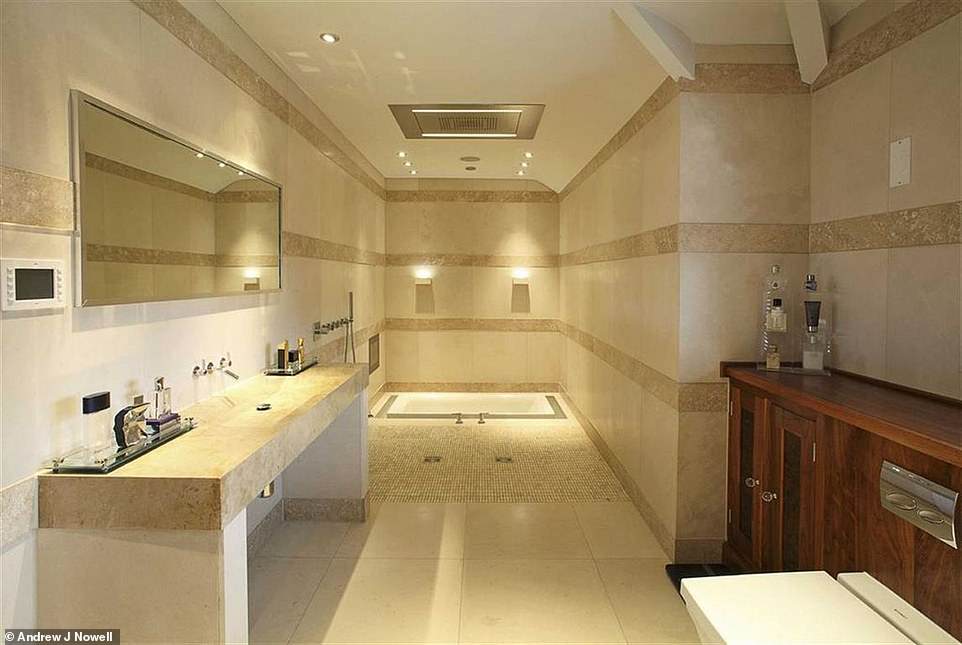 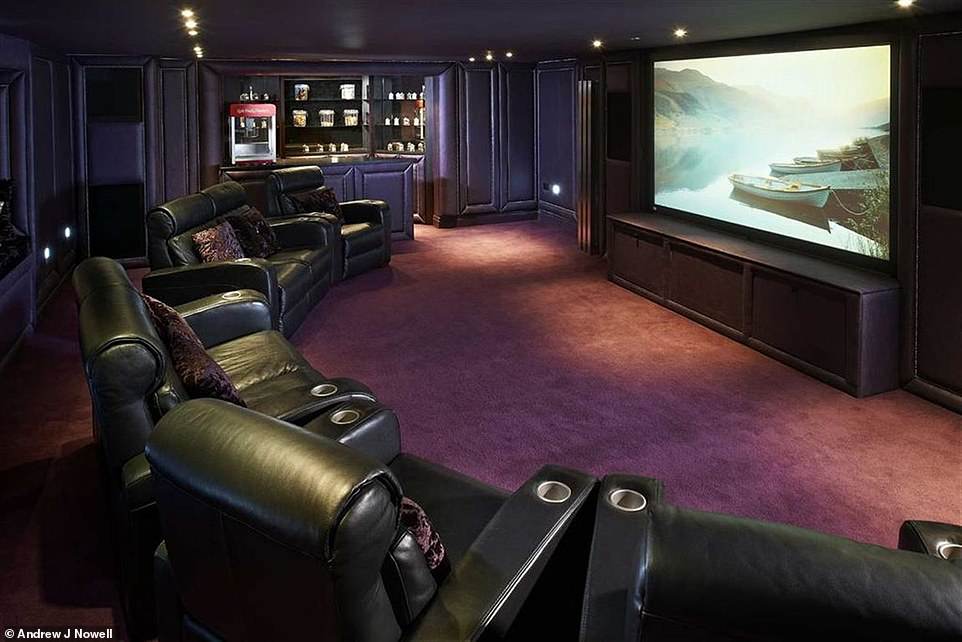 The cinema area is completed with VIP seats, which have plush cushions and cup holders on both arm rests as well as a snack area 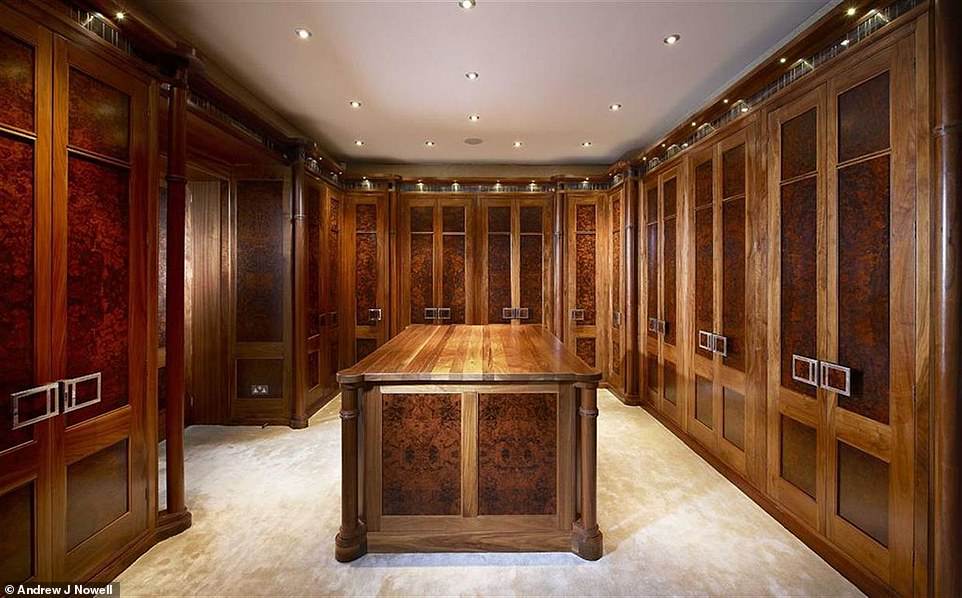 The bedrooms feature handmade burred oak wardrobes, his and her wet rooms, sunken Jacuzzi baths and stone sinks add to the incredible experience.

The outside of the property boasts beautifully landscaped gardens, an oak-framed six car garage, grounds and paddock land.

Lavish homes regularly come onto the market in this neck of the woods but rarely of such extravagance.

Who are Dawn and Ashley Ward?

Ashley Ward is a footballer turned property developer who married former model Dawn Ward. Far from the luxurious lifestyle they are now used to, Ashley proposed to Dawn in the car park of the pub where they first met.

The pair have four daughters together, Darby, Taylor, Charlie and Aston, all have which have also appeared on the reality TV show.

Ashley was born in Manchester and had a spell with Manchester United in the 1986–87 season, making 16 appearances for the club’s Junior B team. He then played for Cheadle Town Youth, and chose to become an apprentice at Manchester City above an offer from Blackburn Rovers.

The couple have had the house on the market for around five years and in 2015 the home had been listed for around £14.5 million. Left the couple can be seen attending the launch of Chantelle Hesky’s restaurant and right attending the ITV Gala

He then retired in the summer of 2005 after playing at a range of football clubs across the country. He now runs a commercial property business and often appears alongside wife Dawn on the Real Housewives of Cheshire.

Dawn is a business woman and TV personality and has tried her hand at a range of careers including modelling, reality TV, interior design and she now also runs a beauty clinic.

On the Real House Wives of Cheshire, Dawn is one of the longest standing cast members and is never afraid to voice her opinion.

Ashley proposed to Dawn in the car park of the pub where they first met. Left they are pictured at the Miss Manchester Awards and right they can be seen attending the Mr and Miss Manchester final