The rise and fall and rise again of Memphis Depay: How the Dutch striker is silencing his critics

After years of hype, promise and a fair amount of disappointment, Memphis Depay is now fulfilling his potential as the leading man at Lyon.

In 2015 at the age of 20, Depay was the Holland’s next biggest star and was on his way to Old Trafford having left PSV Eindhoven in a £21million move.

After being handed a £100,000-a-week deal by Louis van Gaal at United, he was handed the fabled No 7 shirt – adding to pressure already being weighed on the young Dutchman’s shoulders.

It didn’t click for the Dutchman and 12 months into his four-year deal, things started to quickly unravel.

At the age of 22, his form was deteriorating and his attitude followed suit, which left Depay demoted to training with the reserves, completing his fall from grace with the Red Devils.

In a bid to get him back on the right track, Wayne Rooney told him to not turn up to training with the Under 21s in any ‘fancy stuff’.

That advice was ignored as Depay rolled up in a Rolls Royce and a cowboy hat – a defiant stand to any type of authority at Old Trafford. 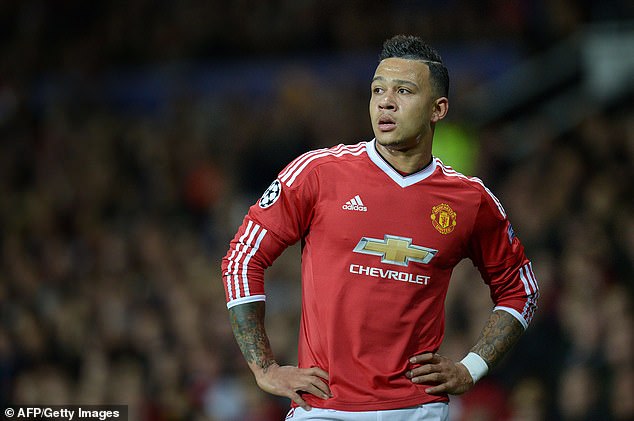 Following his £21m move to Manchester United, Depay struggled to settle and find his feet 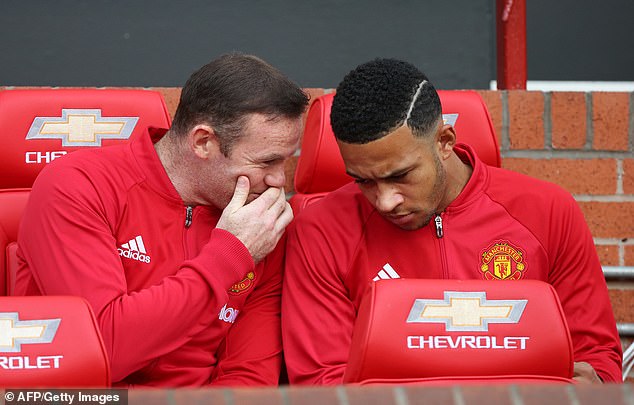 He was even branded as a ‘party boy’ during his time in the north west of England – a label Depay strongly refutes.

‘I remember some of the quotes about me, like “party boy'”. Pure lies. I went out only once in one and a half years in Manchester,’ he told The Times. ‘And it wasn’t even fun.’

With just seven goals to his name from 53 United appearances, Depay’s time was up and the writing was on the wall.

He was later sold to Ligue 1 side Lyon in January 2017 at a £10m loss by Jose Mourinho, with the winger being labelled as immature and unable to take instruction – a lost hope and a player that appeared to collapse under the weight of expectation that was put on his shoulders.

Six months after being sold by United, Depay began pursuing a career in hip-hop, releasing his first track ‘LA Vibes’ that featured Holland team-mate Quincy Promes in the music video. 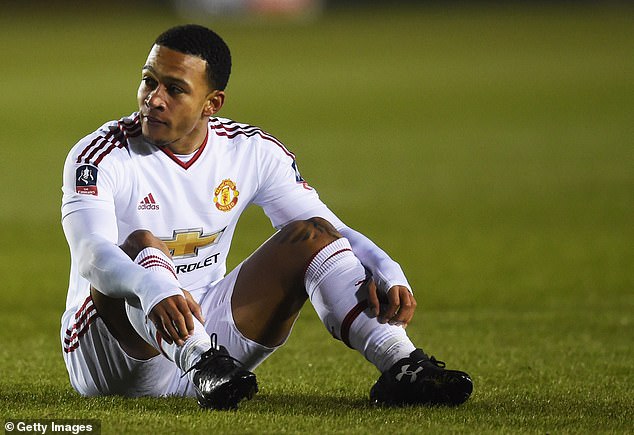 With seven goals to his name from 53 United appearances, Depay’s time at Old Trafford was up

He has churned out several more singles in the years following, racking up millions of views on his YouTube channel.

Having reached five million followers on Instagram, Depay released a ‘freestyle’ named ‘5 Milli’, which saw the Dutchman smoking a cigar while rapping with the Eiffel Tower in the background behind him.

Eyebrows were raised over the video and whether his attention had been diverted away from the pitch with his music career. But he’s proven his doubters wrong.

At the age of 26, he has turned into a leader at Lyon and is the man to take the game to Manchester City on Saturday when the two teams meet in the Champions League quarter-finals. 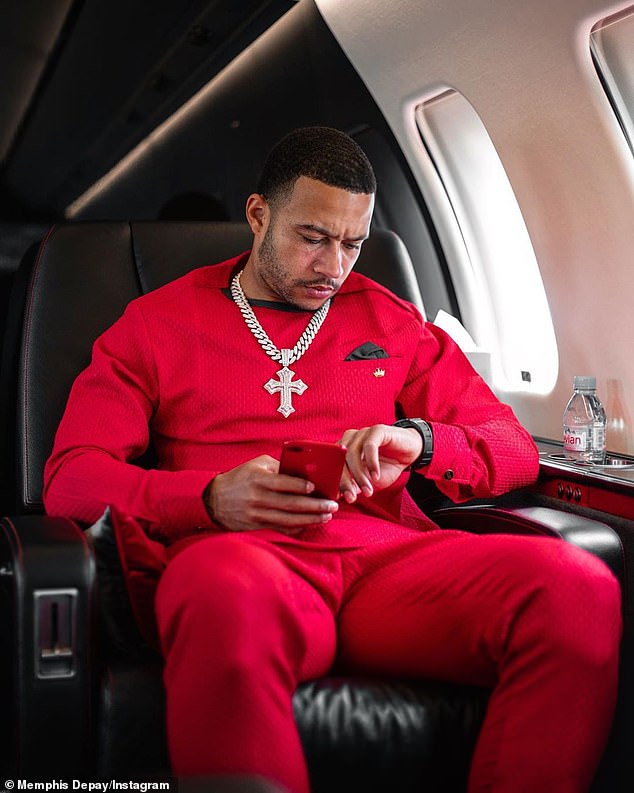 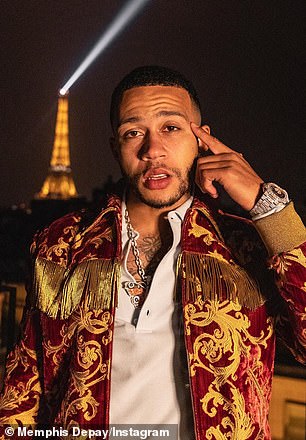 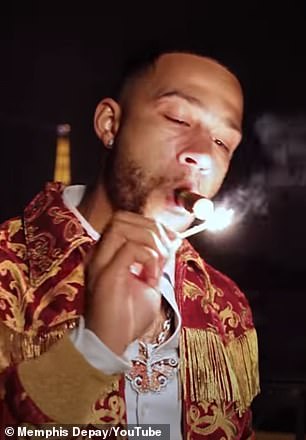 He has since launched a music career in hip-hop, releasing videos on his YouTube channel

Now with a point to prove and talent to back it up, he has become the player all United fans hoped he’d become.

He’s produced a very respectable 53 goals and 39 assists in 125 appearances for the French side and is now attracting attention from the likes of Borussia Dortmund, who continue to build of the youthful revolution in the Bundesliga.

He has been lauded for his attitude and maturity by Lyon coach Rudi Garcia and is now the go-to guy in the big moments. 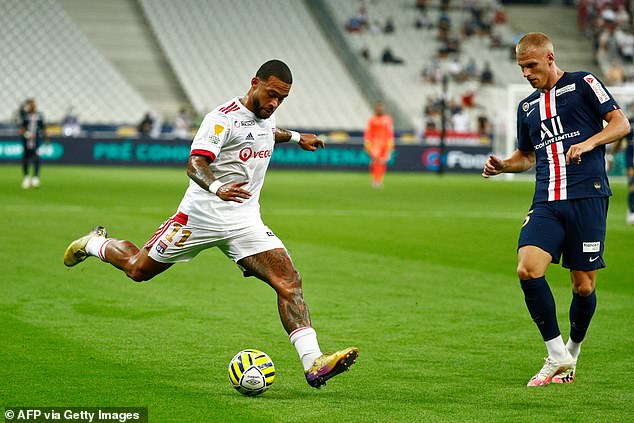 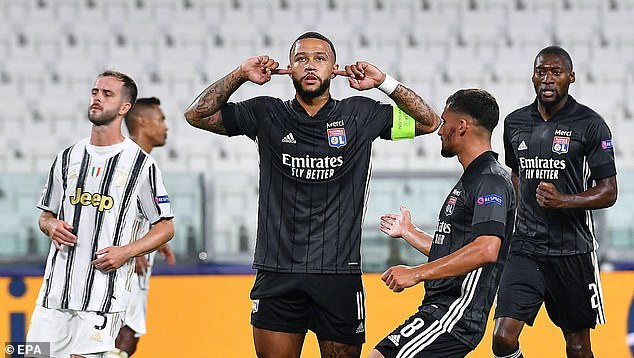 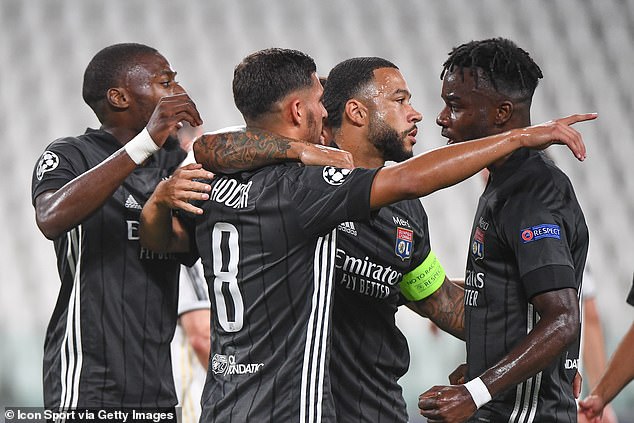 Pep Guardiola’s team are in a good run of form having knocked Zinedine Zidane’s Real Madrid team out of Europe last week, but Depay is ready to do his former club a favour by ending their rival’s hopes of reaching the last four in Europe’s elite club competition.

Often misunderstood and misjudged, Depay is finally living up to his potential that was hoped of him back in 2015.

Now, after claiming the scalp of Juventus in the previous knockout round, Depay is just two games away from a Champions League final – and centre stage is where he is destined to be.