‘The rot has set in’: India’s economy approaches recession

Prime Minister Narendra Modi came to power on a euphoric wave of promises to boost India’s economy, add millions of jobs and bring ‘good times’ to the developing nation.

Three years later, India’s economic prospects are poor and confidence in the BJP to deliver on these promises is beginning to wane.

India’s economic expansion has slowed to its lowest level in three years. Small businesses are struggling, or even shutting down, after overhauls of the nation’s currency and sales tax system. Modi’s own allies warn of a dire outlook, with some raising the specter of an economic depression. 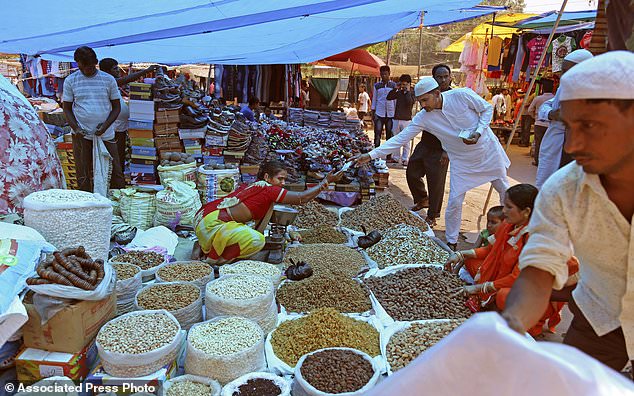 Indians buy dry fruits from a roadside vendor at a market in New Delhi, India

While government ministers have urged patience, analysts and others in Modi’s governing Bharatiya Janata Party are not so optimistic about the current trends.

He accused the government of rushing through poorly planned economic reforms, which he said will hobble home-grown businesses for years to come.

The economy is in a tailspin. Yes, it can crash. We need to do a lot of good things to revive the economy. Even a tailspin can be made to steady. If nothing is done, we are heading for a major depression

‘Private investment has shrunk as never before in two decades, industrial production has all but collapsed, agriculture is in distress, construction industry, a big employer of the work force, is in the doldrums … exports have dwindled,’ he said.

Another leading BJP lawmaker, Subramanian Swamy, said India was facing the possibility of a ‘major depression.’

‘The economy is in a tailspin. Yes, it can crash. We need to do a lot of good things to revive the economy. Even a tailspin can be made to steady. If nothing is done, we are heading for a major depression,’ he said last week. 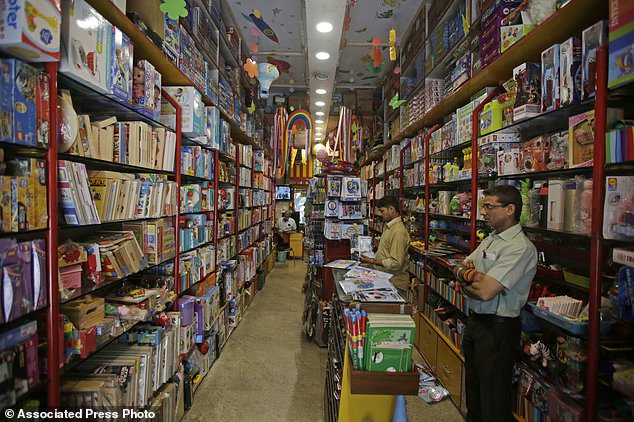 No customers at a toy shop in Khan Market, New Delhi, India 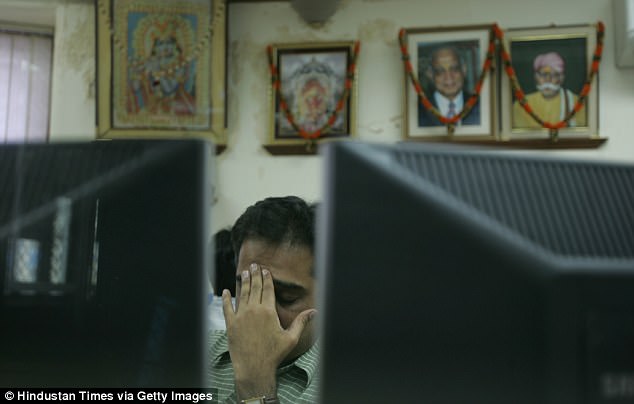 Last week, the Organisation for Economic Cooperation and Development scaled back its economic growth forecast for India to 6.7% for the 2018 fiscal year, down from 7.3% predicted earlier this year.

Other organisations and banks have made similar downward revisions.

Economists have said the country needs to maintain 8% growth to add enough jobs for some 12 million young people joining the work force every year. 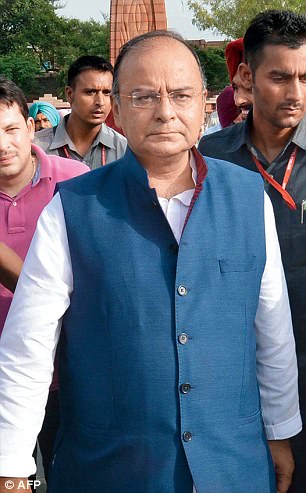 The warnings have been sobering for Modi, who appointed a new Economic Advisory Council this week to offer him advice independent of the finance ministry.

Economists said that may be too little, too late.

‘The rot has set in. I don’t see how the Economic Advisory Committee will help,’ said Biswajeet Dhar, an economist with New Delhi’s Jawaharlal Nehru University.

And ‘whether the government will act on that advice is yet to be seen.’

India has long been considered a darling market for investors, with high rates of growth and a 1.3 billion population that many companies are eager to reach. Just a year ago, the economy jumped 9.1% in the first quarter – temporarily earning the title of world’s fastest growing economy- and has rarely dipped below 6.5% since 2013.

His campaign slogan of ‘Achhe Din’ – Hindi for ‘Good Times’ – helped inspire a mass following across the nation, from university students to business leaders.

And for several months after his election in 2014, things looked good. Foreign investment increased with government moves to open up sectors, imports remained cheap thanks to globally depressed oil prices, and economic growth ticked along at rates above 7%. 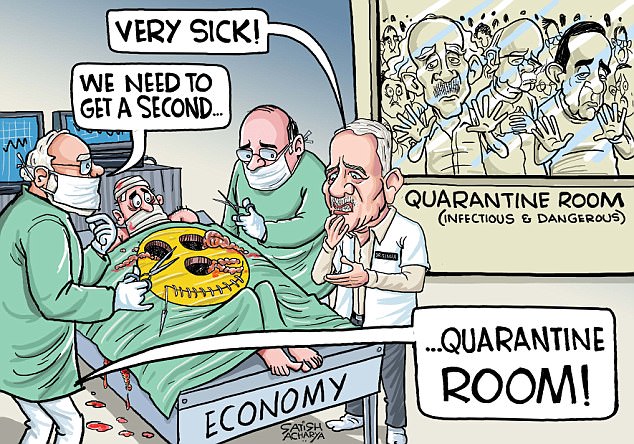 By November 2016, the government was confident enough to launch the first of two massive economic reforms.

Without warning, Modi appeared on national television to inform citizens that most of their currency would be worthless in the morning, as the government declared 86 percent of all rupee notes would be replaced with newly designed bills.

The government said the move was aimed at cracking down on tax evasion, corruption and counterfeiting. But with most of the new bills not yet printed, ATMs ran dry for weeks as account holders stood for days in long lines at banks that gave out only limited withdrawals.

Many small, cash-reliant businesses including grocery stores and home-based workshops suffered huge losses or went under.

Just when things were returning to normal this year, Indian businesses were hit with a second upheaval on July 1 – the replacement of a complex system of cascading federal and state taxes with a single Goods and Services Tax. 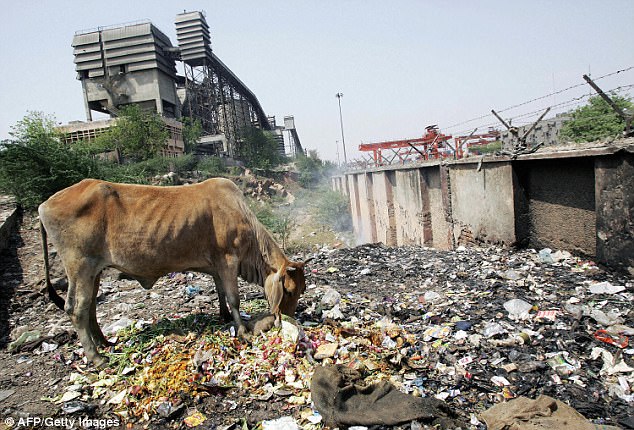 A cow feeds on a pile of garbage beside the walls of an industrial area, on the outskirts of Delhi

The government assured citizens the move would boost economic growth by simplifying the existing tax structure.

And again, it was mostly small businesses that suffered the most, with many unable to comply with new, thrice-monthly tax filing requirements.

‘A badly conceived and poorly implemented GST has played havoc with businesses and sunk many of them,’ said Sinha, the former finance minister.

Rural Indian villages and towns, where more than half of the country’s population relies on farming for their livelihoods, have fared even worse.

Demonetisation left many farmers, already among the poorest, unable to buy seeds and fertilizer for the sowing season. Their distress was compounded by two years of poor monsoon rains and drought.

Economists are most alarmed, however, by the slowdown in manufacturing and construction – two sectors many had assumed would do well under a business-friendly government. Instead, both have seen a sharp rise in unemployment. 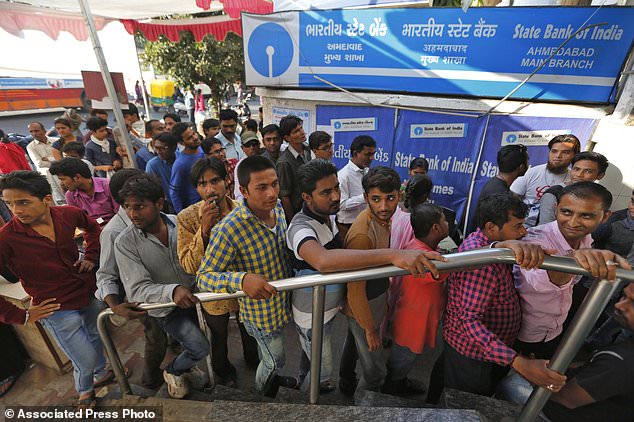 Indians stand in a queue to withdraw and deposit currency at an ATM a week after India announced that it was withdrawing 500 and 1,000 rupee notes as legal tender to fight corruption and tax evasion, in Ahmadabad, India

‘Major employment creators were the small businesses. They are the ones who have been worst hit,’ said economist Mihir Sharma of the Observer Research Foundation, a New Delhi-based think tank.

Modi is likely to face increasing pressure on the economy as the next general elections in early 2019 approach.

‘Jobs shortages have the potential of impacting the next elections,’ Sharma said.

Still, the government remains upbeat, noting that the latest quarterly growth figure of 5.7% was still pretty good compared with how other nations were faring.

‘The government has taken some very important decisions,’ said Cabinet minister Piyush Goyal, who long held the energy portfolio but now heads the Railways Ministry. ‘Difficulties and criticism will come. But we are confident, and we will stay the course.’