My legs are stretched out elegantly to the side with my ankles crossed as I sit at a dining table, all the while nonchalantly leaning on my arm. In fact, I’m creating such a blockade that were a sommelier to walk past, they would surely go flying.

Resting ‘casually’ on one elbow, I feel a mass of juxtaposed limbs. But when I see the resulting photos, I am pleasantly surprised. My stocky body looks unusually lithe and relaxed.

As well it might, because I am following the advice of David Suh, the undisputed king of a growing breed of ‘posing coaches’. David has more than four million followers on TikTok, where his videos showcase how dramatically something as simple as an angled shoulder can transform us all from drab to fab.

And now he’s turning his attention to me, with a masterclass over Zoom from his home in California.

He has his work cut out. Like many of us, my default pose is ramrod still with a rictus grin. Photos from my holiday in Turkey show me hunched awkwardly over a sun lounger, covering as much flesh as possible.

But David insists that we can all look good on camera.

‘Being photogenic isn’t a genetic thing. It’s something anyone can obtain,’ insists the 27-year-old.

A former dancer, when David started working as a photographer he realised subjects were ‘uncomfortable’ because they didn’t know how to stand, adding: ‘That’s when I said I really need to start being aware of posing.’

He’s evolved a system to help. David explains we all have seven ‘posing points’ — the hips, ankles, knees, shoulders, elbows, wrists and neck — that are key to a flattering stance.

Unlike many photographers, he shies away from cheesy catalogue poses. Instead, posing is about ‘body language and a way of communicating’, David says. ‘When we don’t think about it, it’s more natural, more possible for everyday people.’

Which means all his posing advice comes with a caveat: there’s no point if I can’t relax.

‘I want you to truly adapt the mindset that “I am feeling like an absolute badass. I am in control of my body,” ’ he says. He says our habit of freezing in front of the camera often stems from childhood, when we’re instructed to ‘say cheese!’ by our camera-wielding parents. ‘We learn to put on fake emotion,’ he explains.

So can he undo my years of posing pitfalls? With the help of the Mail’s photographer, I recreate the four top summer poses David shows me.. 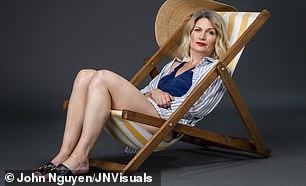 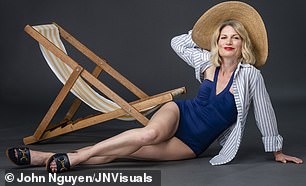 Antonia says she tends to slump in a deckchair, hiding her stomach. But David suggests lying on her side propped up by one arm

In photographs from family holidays, I tend to be slumped in a deckchair, hiding my stomach.

Instead, David suggests I lie on my side, propped up by one arm, and roll my top hip forwards — the most important ‘­posing point’ on account of its ability to dramatically change the shape of my body.

This will create instant curves by increasing the contrast between my hip and my waist, turning me into a ‘beautiful avocado’, says David.

It also means my thigh rolls down, so there’s less of my inner thigh (which I’m not wild about) on display.

Whatever part of your body is at the front in the picture appears the largest, says David, when I ask how to appear slimmer. So having my leg coming forward shifts emphasis away from my torso. He advises I use my free hand to adjust my swimsuit or fiddle with another accessory to make the pose look less forced. I casually hold a floppy hat on the back of my head — David is staunchly against deploying hats over our faces as a form of camouflage if we’re suffering from low self-esteem, but says that when worn with confidence, ‘covering your face has a cool mystery to it’. With my waist accentuated, my hat providing a distraction and thighs hidden, I do feel confident.

Instead of forming an awkward line-up with your girlfriends, create some drama: find a wall to lean against with the knee bent, lift the right leg as high as your can and turn it to the side

Not for shrinking wallflowers, David, nonetheless, recommends this almost macho pose as a ‘fabulous’ way to immortalise an evening out.

Instead of forming an awkward line-up with your girlfriends, create some drama: find a wall to lean against, he suggests, and with the knee bent, lift the right leg as high as you can and turn it to the side.

David has a spectrum of poses that are not exclusive to either gender — a man would be more likely to stick his chest out, a woman to sit with her legs together, for example.

‘However, if you feel in control and dominating, that’s totally valid and the most important aspect,’ he says.

Because this pose is also so exaggerated — I feel like I’m in an aerobics class — I start to laugh, which I think makes me look more confident, creating my favourite picture.

It is difficult to pose in the middle of nowhere with nothing to lean on. By putting weight on one leg and elongating the other, you can stick the hip on the weighted leg out, creating more shape

‘The hardest thing is a wedding scenario, where you’re posing in the middle of nowhere with nothing to lean on, or sit on,’ says David, adding that to compensate, ‘we have to do things with our body.’

He suggests ‘fiddling with something’ around my navel or putting my hands in my pockets will make me feel — and, therefore, look — more natural.

For my lower body, he says, ‘something simple works great as long as you’re relaxed at the hips.’

By putting my weight on one leg and elongating the other, I can stick the hip on my weighted leg out, creating more shape.

The end result looks surprisingly natural…given how hard it is to effectively stand on one leg.

MAKE THE MOST OF YOUR FACE 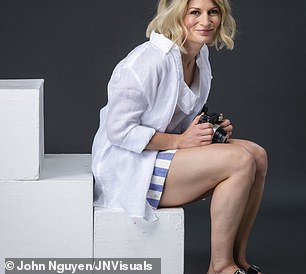 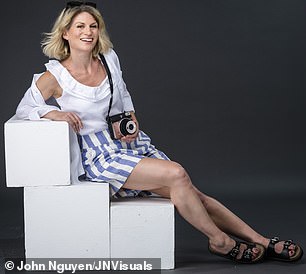 For a daytime holiday snap, David suggests leaning back on steps, propping weight up with the elbows, stretching my legs out at a 45 degree angle and gazing into the distance

From my self-conscious smile by the Statue of Liberty to looking frazzled outside Bangkok temples, I’ve never managed to nail the perfect sightseeing picture.

For a daytime holiday snap, David suggests leaning back on steps, propping my weight up with my elbows, stretching my legs out at a 45 degree angle and gazing into the distance.

The key move is to raise my head slightly, which shifts harsh shadows under the eyes and nose caused by the glaring sun high in the sky. ‘Bringing your face up diminishes those sharp shadows,’ says David. He divides the face into nine posing points that can be angled to different effect.

I tell David my left eye is smaller than my right and he recommends I turn it towards the camera, ‘so it’s more in the spotlight and should appear larger and even out’.

In the past, I’ve tried to hide my eye by turning my face away from the camera, but to my surprise, David’s tip works.