The newly discovered combination can help if chemotherapy fails, extending patients’ lives by at least a year.

In almost half of kidney cancer patients, by the time the disease is diagnosed it has already spread to other areas of the body due to a lack of symptoms, slashing life expectancy from five years to two.

While chemotherapy, which kills both cancer and healthy cells, is used to treat most other advanced cancers, the treatment does not work for most kidney cancers.

The established treatment for the condition is either radiotherapy – which shrinks tumours – or tyrosine-kinase inhibitor drugs, including one called sunitinib, which interrupt the blood supply to cancer. However, these only ‘pause’ the growth of tumours for four or five months.

New research presented at the European Society for Medical Oncology 2017 shows that a combination of two drugs can achieve startling results, making tumours vanish in ten per cent of patients.

The drugs, ipilimumab and nivolumab, are already used with remarkable success in the treatment of deadly melanoma skin cancer. Nivolumab is also used to treat advanced lung tumours. The new trial found that the combination achieved significant kidney tumour shrinkage in 42 per cent of the 425 patients in a trial and reduced the risk of death within two years by 37 per cent.

Ipilimumab and nivolumab are immunotherapy drugs that work by enhancing the ability of the body’s immune system cells to attack and destroy cancer. ‘Rather than just putting the cancer into remission for a period, like standard treatments, they appear to carry on working even after treatment has stopped,’ says Dr Paul Nathan, consultant oncologist at Mount Vernon Cancer Centre in Middlesex and a lead researcher on the trial. 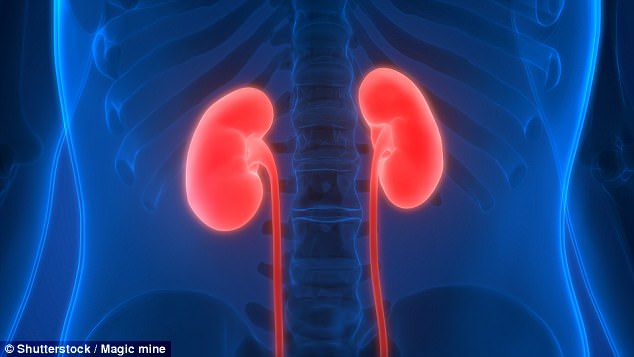 The newly discovered combination can help if chemotherapy fails, extending patients’ lives by at least a year

During the trial, 840 kidney cancer patients were given either sunitinib or the combination immunotherapy. Those on the combination had four infusions of the two drugs at three-weekly intervals.

One-fifth of patients experienced severe side effects such as inflammation of the bowel or liver, and had to stop early. ‘The median overall survival rate [the time at which 50 per cent of patients have died after treatment] for sunitinib was 26 months, but for the combination immunotherapy arm, it has still not been reached 36 months on. More than half the patients are still alive,’ says Dr Nathan.

One such trial patient is Gary Norman, 62, from Luton in Bedfordshire, whose tumour has disappeared. The retired aerospace engineer was diagnosed with kidney cancer in 2013, and enrolled on the trial after his cancer spread to his lungs.

‘I was told I had just over a year to live,’ he says. ‘I hoped my cancer wouldn’t get worse, but never expected to receive a wonder drug. My latest scans show no detectable cancer and evidence that the drug is still active in my body.’

Gary’s results were achieved despite receiving only three out of the four drug infusions.

‘I was pulled out because the side effects were devastating – vomiting and diarrhoea, dreadful fatigue and diabetes,’ he says.

The therapy was approved for NHS melanoma patients in 2016 after drugs watchdog the National Institute for Health and Care Excellence negotiated a ‘discounted’ price with the manufacturers, Bristol-Myers Squibb, of less than £30,000 per patient per year.

‘It is already licensed and approved for use in melanoma, so the NHS should also find it cost-effective for use in kidney cancer,’ said Dr Nathan.