The socialites showing off their precious pampered pooches on Instagram

British aristocrats and high society beauties have kept their fans entertained with a glimpse at the pampered lives of their precious pooches over the summer.

Leading the elite highlighting their love of dogs online are Earl Spencer and the Duchess of Rutland, both 56, who fill their Instagram feeds with snaps of their animals enjoying their plentiful grounds.

Elsewhere, the Duchess of Cambridge’s brother James Middleton, 33, often shows off his beloved pets enjoying lavish meals or snazzy trips – with the entrepreneur even boasting a £2,000 dog bike so his six canines can travel in style.

Meanwhile, Grace Kelly’s granddaughter Camille Gottlieb, 21, who is based in Monaco, and Lydia Forte, the daughter of hotelier Sir Rocco, both offer their followers a glimpse of the luxury lives of their sun-loving pooches.

Here, FEMAIL takes a look at the socialites showing off their glamorous pets on Instagram.

Princess Diana’s brother Charles, Earl Spencer, 56, often shares snaps of his adorable dogs to his Instagram account, demonstrating the comfortable spots his pets like to claim at his Althorp Estate. Pictured are his two new puppies Forager and Rufus 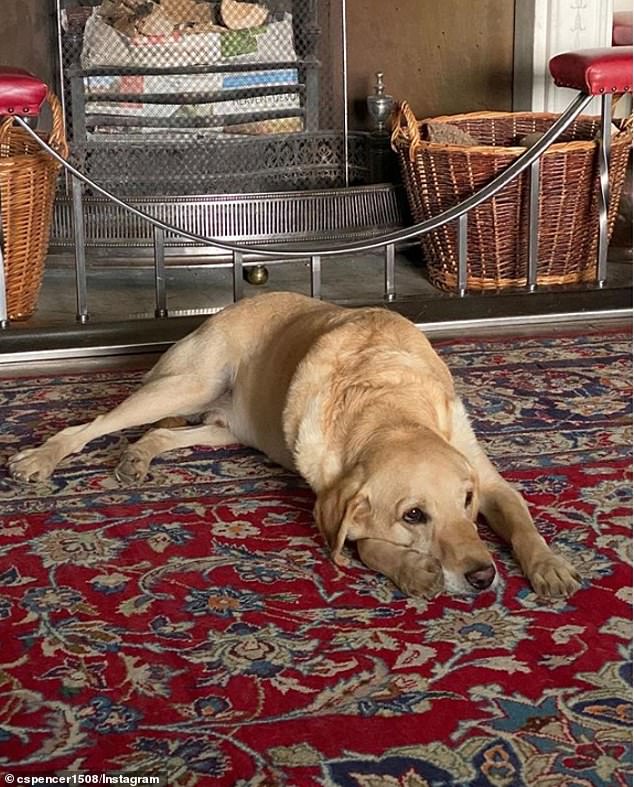 One of Charles’ other dogs, a sullen golden Labrador Retriever, sits on a lavish red carpet while resting at the family home. Sharing the photo with his 12,000 followers, Charles wrote: ‘Not enjoying the thunder outside.’ 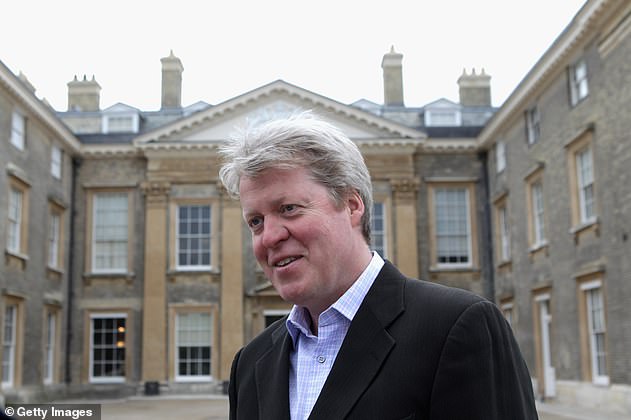 Earl Spencer, the younger brother of Princess Diana, posts on Instagram and Twitter – where he boasts a combined 21,800 followers – show how he has been passing the time with early morning strolls

Princess Diana’s brother Charles, Earl Spencer, 56, often shares snaps of his adorable dogs Forager and Rufus to his Instagram account, demonstrating the comfortable spots his pets like to claim at his Althorp Estate.

While the house itself offers plenty of room to roam around, the family also has 550 acres of land to explore.

Earl Spencer inherited the family seat in Northamptonshire on the death of his father in 1992.

Althorp boasts 500 years worth of art and family relics and is the final resting place of Princess Diana. 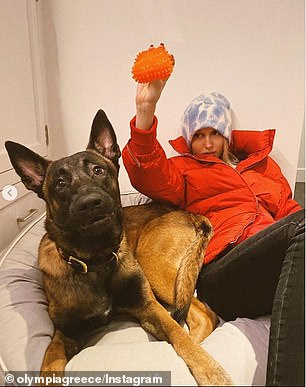 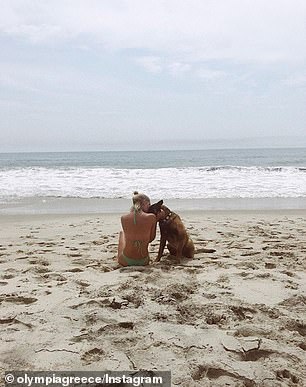 Proving her stylish prowess even when next to her pet, pictured right, Princess Olympia of Greece, who spent lockdown in the UK, showcased her adorable dog enjoying a trip to the beach, seen left, recently on her social media account. The name of her pooch is unknown 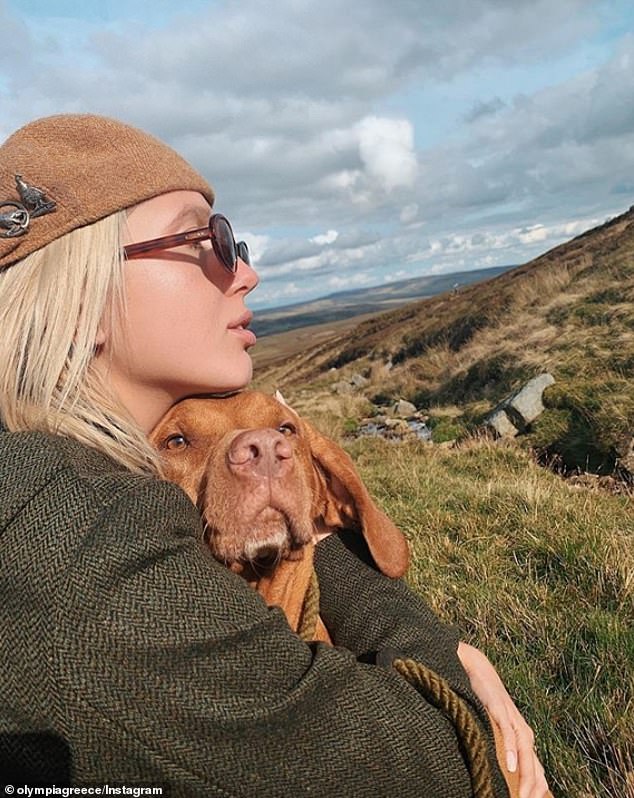 Princess Olympia of Greece appears to make sure every dog in her life feels loved by offering plenty of affectionate cuddles, pictured. It is unclear if this another of Olympia’s pets

Stylish socialite, Princess Olympia of Greece, who spent lockdown in the UK, loves a dog with character.

The model is the only daughter of Pavlos, Crown Prince of Greece and and his wife, Marie-Chantal Miller.

She is the happy owner of a German Shepherd whose name is unknown, which she takes with her on her numerous adventure. The pair recently enjoyed a trip to the beach. 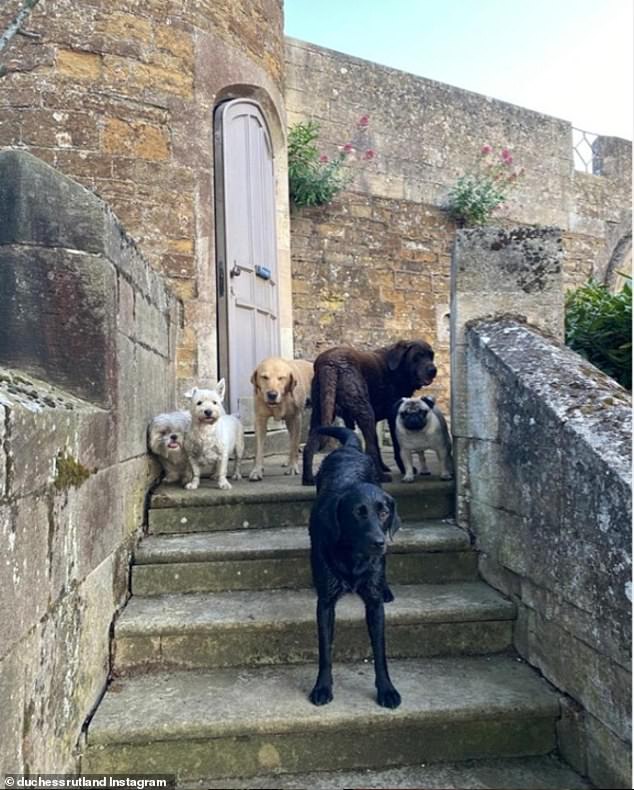 At Belvoir Castle, the Duchess of Rutland, 56, often shows her six dogs enjoying the stunning grounds in Leicestershire. Posting the above snap, the proud duchess wrote: ‘Our dog family’ 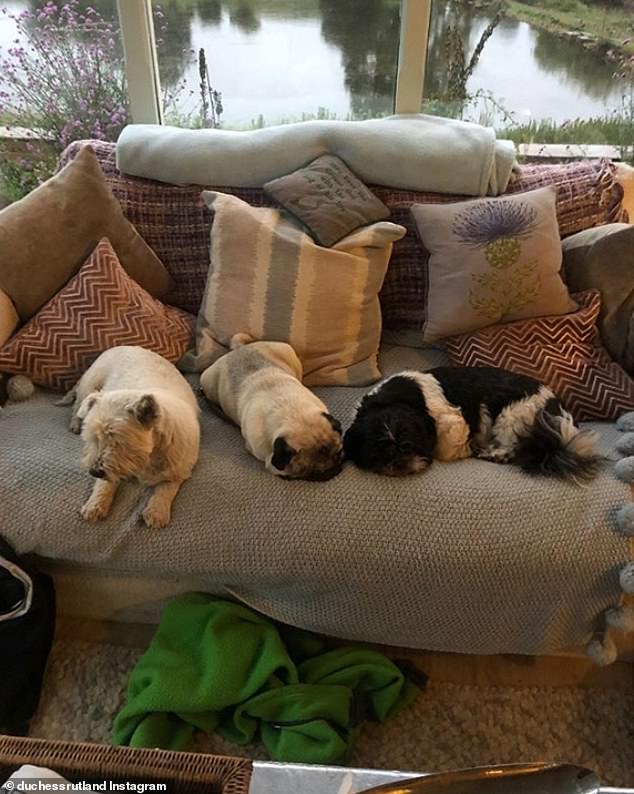 ‘Snoozy pups,’ the duchess wrote to caption this image of her three smallest dogs resting on a sofa in the castle. She shared it with her 10,000 Instagram followers last month 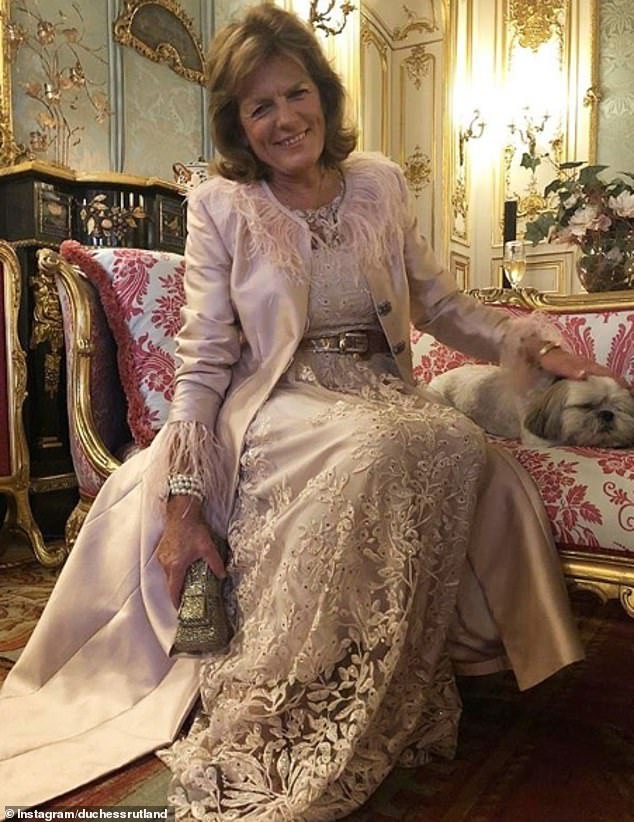 The Duchess of Rutland, 56, has continued her business-minded plan to keep Belvoir Castle afloat amid the coronavirus pandemic, revealing a virtual tour of the estate and a take-away menu for meals from the Engine Yard

Emma Manners, Duchess of Rutland, 56, is the proud owner of six dogs, of different breeds, including a pug, a labrador and a Westie.

She loves to let the dogs loose on the grounds of the beautiful Belvoir Castle in Leicestershire. 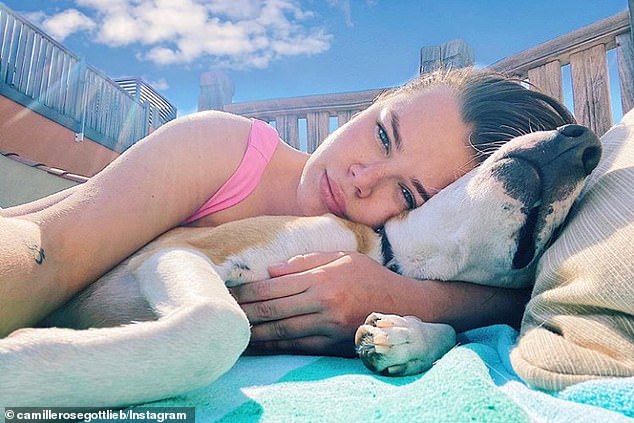 Camille Gottlieb, whose mother is Princess Stephanie of Monaco and grandmother is the late Grace Kelly, delights in showing off her lovable pet to her 68,000 Instagram followers. However, the name and age of her dog remains unclear 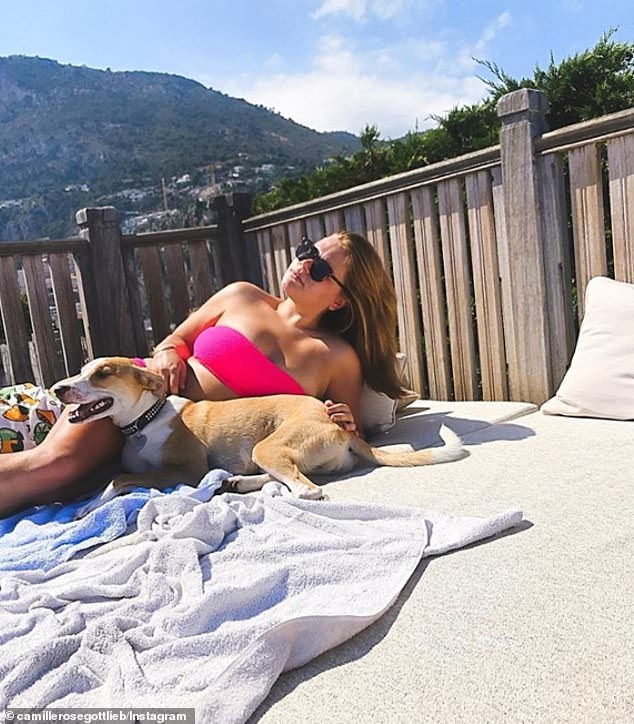 Illustrating the dog’s pampered lifestyle which appears to be filled with days in the sun, pictured, the 21-year-old shared a snap of her beloved pet recently with the caption: ‘The person I love the most’

The second daughter of Stephanie of Monaco and granddaughter of silver-screen legend Grace Kelly Camille Gottlieb, 21, loves her pup and enjoys showing him off to her 68,000 followers on Instagram.

The Monaco royal and socialite called her dog ‘the person [she] love[s] the most. ‘

The pampered pet enjoys relaxing sunbathing sessions in the sun and walks on the beach with his illustrious owner.

His name and age are, however, unknown. 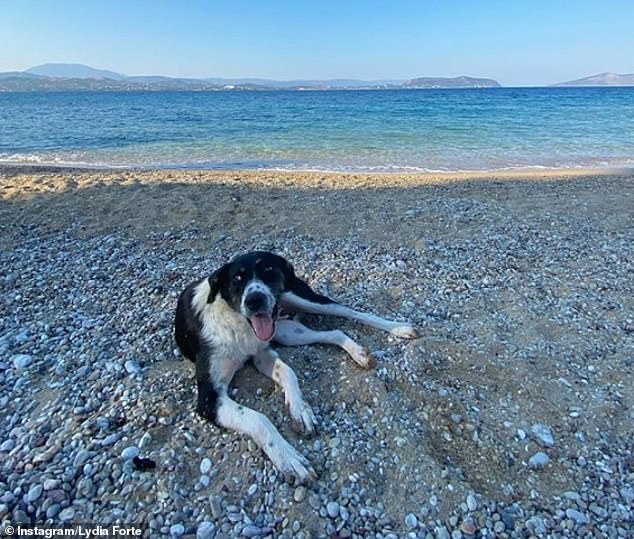 Lydia Forte, the daughter of hotelier Sir Rocco, is currently enjoying a break with her family in Greece. Keeping her 26,000 Instagram followers up-to-date with her lavish travels, she shared this adorable photograph of a dog enjoying the sun, sand and sea. It’s unclear if the animal belongs to Lydia 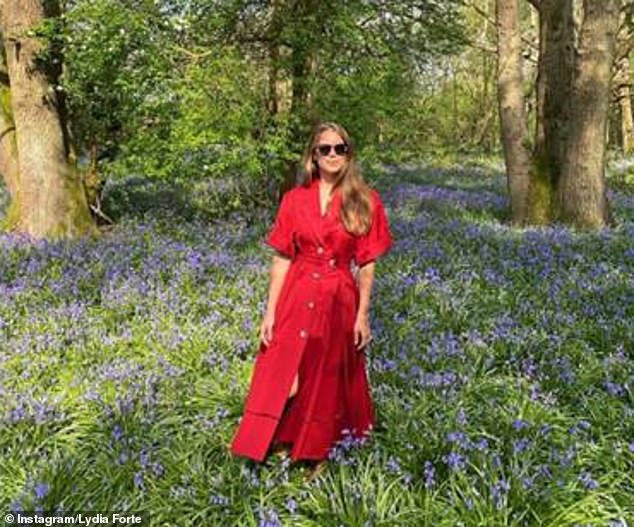 The glamorous It Girl (pictured during lockdown), who is close friends of Princesses Eugenie and Beatrice and a stalwart of the London social scene, joined her parents in isolation at their sprawling 1,800-acre estate in Ripley, Surrey

Lydia Forte, 33, is the daughter of the hotelier Sir Rocco, whose company owns the Balmoral Hotel as well as several others around Europe, Russia and South Africa.

She is also a close friend of Princesses Eugenie and Beatrice and a regular on the London social scene.

She recently shared the picture of an adorable white and black cross during a holiday, leaving her Instagram to ponder whether the pooch was hers or belonged to a friend. 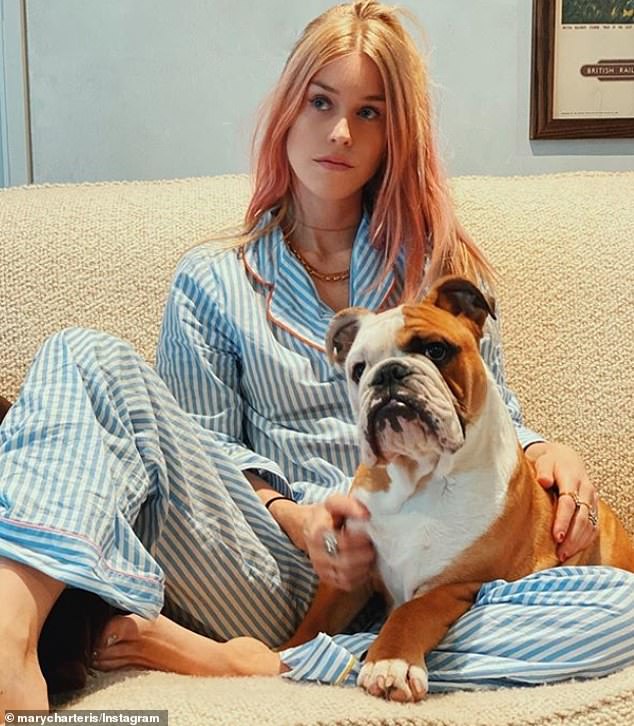 At the start of lockdown, Lady Mary Charteris, 33, who was thought to be based at her family estate at Stanway House, in Gloucestershire, at the time, shared this adorable and rare snap of a pooch thought to be her pet. She wrote: ‘Thank god for snuggly puppy dogs and snuggly PJs, right now more than ever’

Lady Mary Charteris, 33, who is thought to be based at her family estate of Stanway House in Gloucestershire, recently shared a snap of a ‘snuggly puppy’ thought to be hers.

The cuddly pup, believed to be a bulldog, seem  not to mind a relaxing evening at home.

The model and DJ is the  daughter of Scottish nobleman James Charteris, 13th Earl of Wemyss and 9th Earl of March and Catherine Guinness. 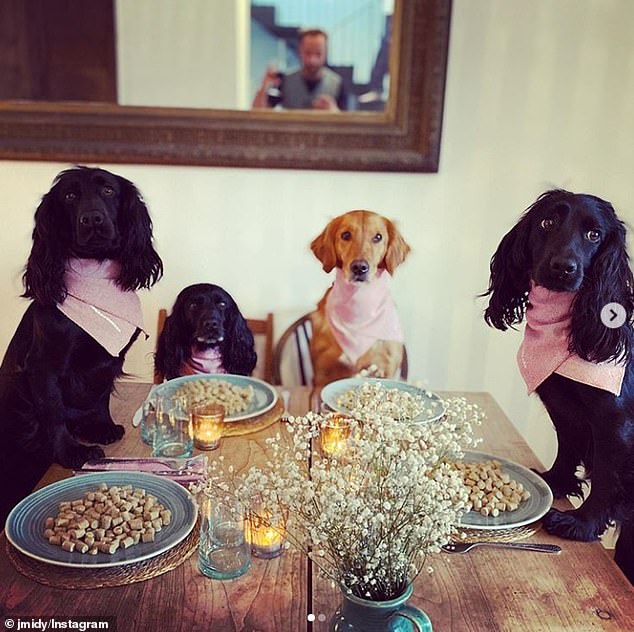 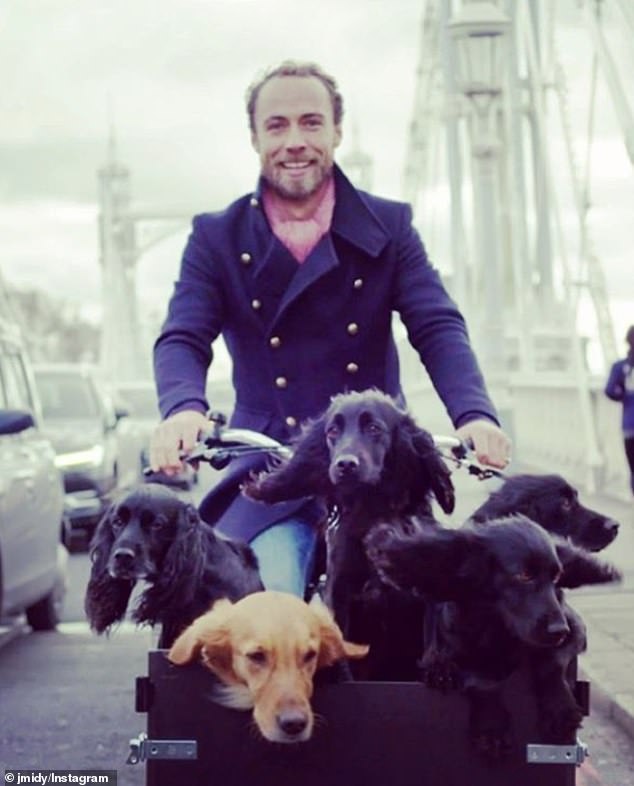 The entrepreneur even boasts a £2,000 dog bike so his six canines can travel in style, pictured. James, who lives in Berkshire, has often credited his dogs with helping him through his struggle with depression

Kate Middleton’s 33-year-old brother’s love for dogs has been well-documented, and often by the pet-lover himself.

He’s credited his pooches for helping him fight his depression and even invested in a £2,000 dog bike so that as many of his pooches as possible can hop and accompany him on his adventures when he hits the town.

Middleton, who is engaged to French financier Alizée Thevenet, have been delighting his fans by sharing numerous snaps of his pooches on Instagram during lockdown and over the years prior.