The staggering numbers behind Super Bowl LIV in Miami on Sunday

Super Bowl week is once again upon us, with the extravagant pre-game build-up to the 54th edition in full swing ahead of the Kansas City Chiefs taking on the San Francisco 49ers on Sunday.

This year, the NFL’s flagship event is being held at the sparkling Hard Rock Stadium in Miami, Florida.

Home of the Dolphins, the 65,326-capacity stadium will host the event for the sixth time in 31 years. 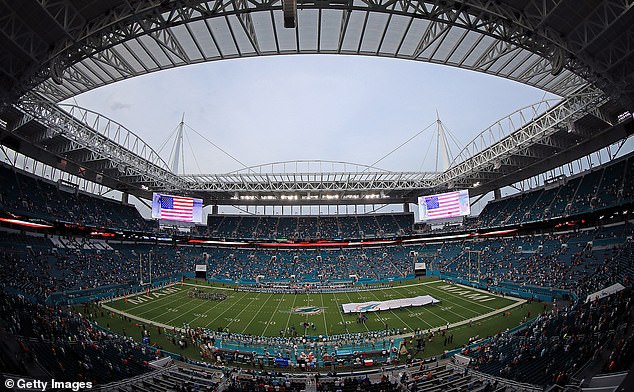 The 65,326 capacity stadium will host the Super Bowl for the sixth time in 31 years

Amid all the razzmatazz, commercialism and staggering expenditure, the facts and figures that underpin the Super Bowl always make eye-catching reading.

Do people really tune in for the adverts? Is a match ticket really that expensive? How much food is eaten on the day?

With the event as a whole almost a bigger deal than the game itself, Sportsmail takes a look at the weird and wonderful statistics behind Super Bowl LIV. 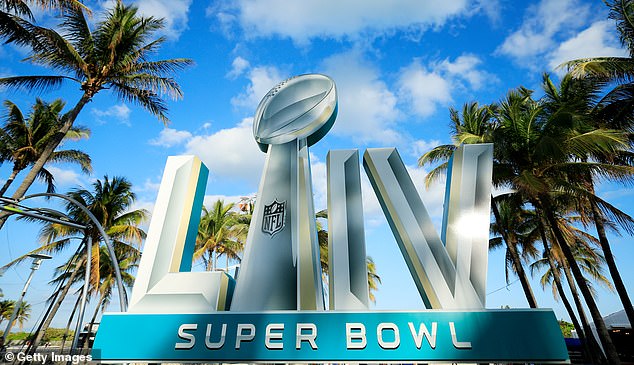 50 – years since Kansas City Chiefs were last in the Super Bowl, when they beat the Minnesota Vikings in New Orleans. Kansas also appeared in the first Super Bowl in 1967, losing to the Green Bay Packers.

Five – the number of Super Bowls the San Francisco 49ers have won. Victory on Sunday will take them to up to six, joint-top with the New England Patriots and the Pittsburgh Steelers.

98.2million – the number of TV viewers raked in last year, the lowest in 11 years.

32.3m – how many social media interactions there were in 2019 across Facebook, Instagram and Twitter. The year before, there were 170.7 million – the huge drop-off reflected last year’s low-scoring Super Bowl compared with the 2018 thriller, when the Eagles and the Patriots played out a high-scoring affair which included a NFL record for the most yards gained by both teams combined, at 1,151.

2.1m – the number of Twitter followers 49ers cornerback Richard Sherman has, the most of any player in the Super Bowl. 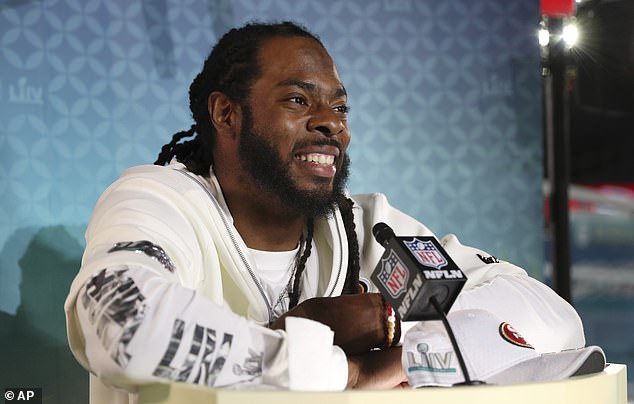 Figures according to WalletHub

$7,438 – average price of a Super Bowl LIV ticket on the resale market.

$118,000 – the prize money each Patriots member won last year for their triumph against the Los Angeles Rams (whose players took home half that figure).

10,000 – number of volunteers in and around Miami Gardens for Super Bowl week.

1.4billion – how many chicken wings will be eaten.

67 – percentage more pizza eaten on a Super Bowl Sunday than on an average day.

Zero – number of Super Bowls won by either head coach. Veteran Andy Reid of the Kansas City Chiefs, widely considered one of the best in the game, lost in his only appearance with the Philadelphia Eagles against the Patriots in 2004.

22 – years since 49ers coach Kyle Shanahan’s dad, Mike, won the Super Bowl with the Denver Broncos. He won a year later too… no pressure Kyle. 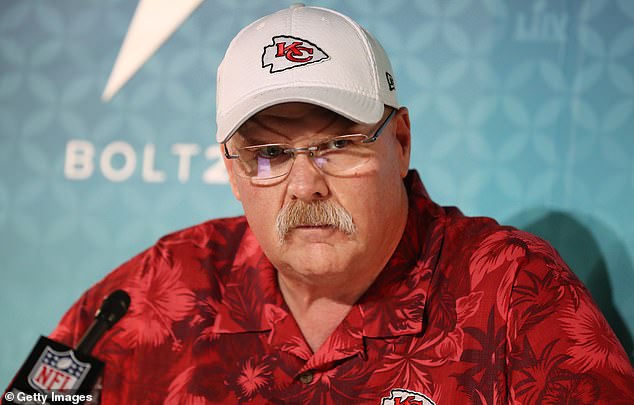 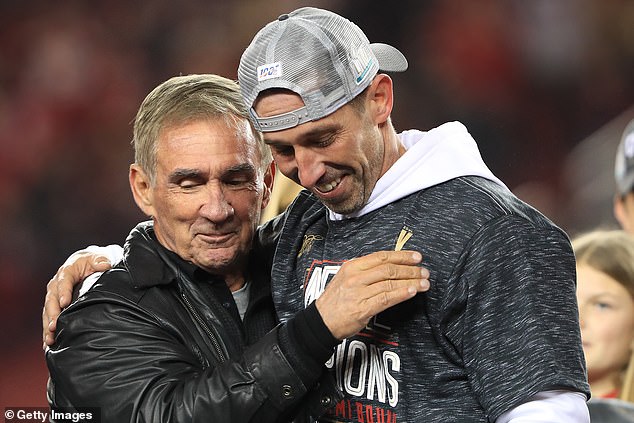 PREVIOUS SUPER BOWLS AT THE STADIUM

23 – the percentage of viewers who believe the ads are the best part of the whole event!

50 – amount of regular season touchdown passes thrown by Chiefs quarterback Patrick Mahomes last year. Last year’s NFL MVP lights up the field with both his ridiculous vision and nimble footwork on the run.

Two – number of Super Bowl rings San Francisco QB Jimmy Garoppolo already has. The 28-year-old was back-up to Tom Brady at the New England Patriots for both their 2015 and 2017 triumphs. 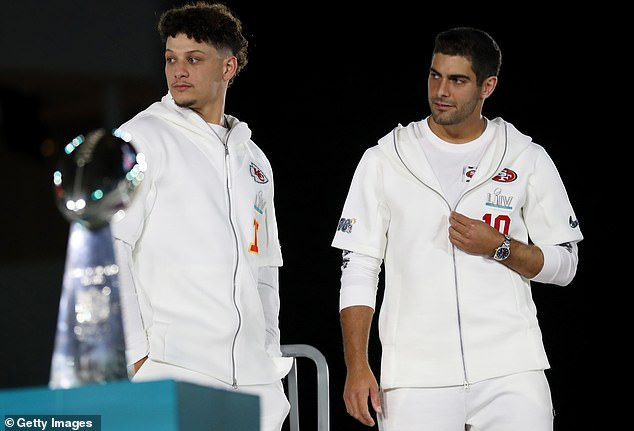 All eyes will be on these two: Chiefs QB Patrick Mahomes and 49ers QB Jimmy Garoppolo

$5.6m – the average cost of airing a 30-second commercial during the Super Bowl.

$412m – how much 2020’s host broadcaster FOX Sports is projected to rake in from adverts.

21.87mph – the top speed 49ers running back Raheem Mostert reached during the NFC Championship Game against the Green Bay Packers, on a first-quarter touchdown run. 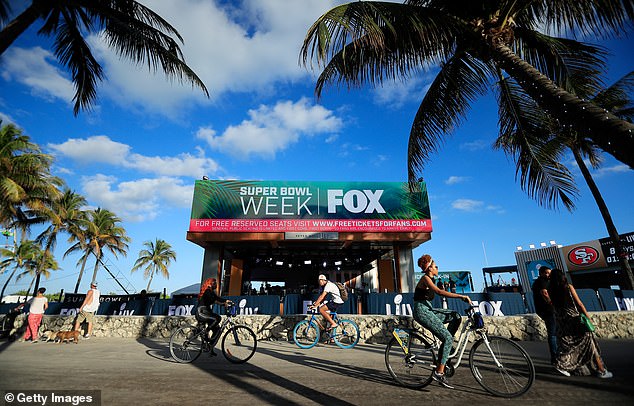 HOW MUCH IS SPENT ON BOOZE?

Figures according to WalletHub

27 – percentage of Americans who plan to attend a Super Bowl party.

10 – percentage of people who will miss work the day after the Super Bowl. 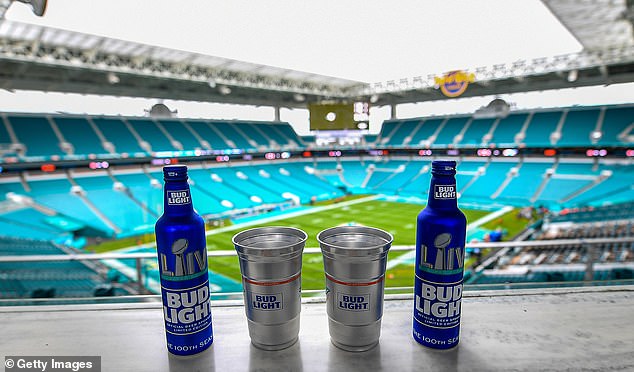