The star is great and the music is joyous – but Tina: The Musical is let down by a lame romance

It’s been only six years since Soul Sister, the last Tina Turner musical, was in London. This one, however, comes with Turner’s official seal of approval.

She’s played by American actress Adrienne Warren, who’s got her off to a tee: the bow-legged strut, the hand flutters, the paint-stripper voice. 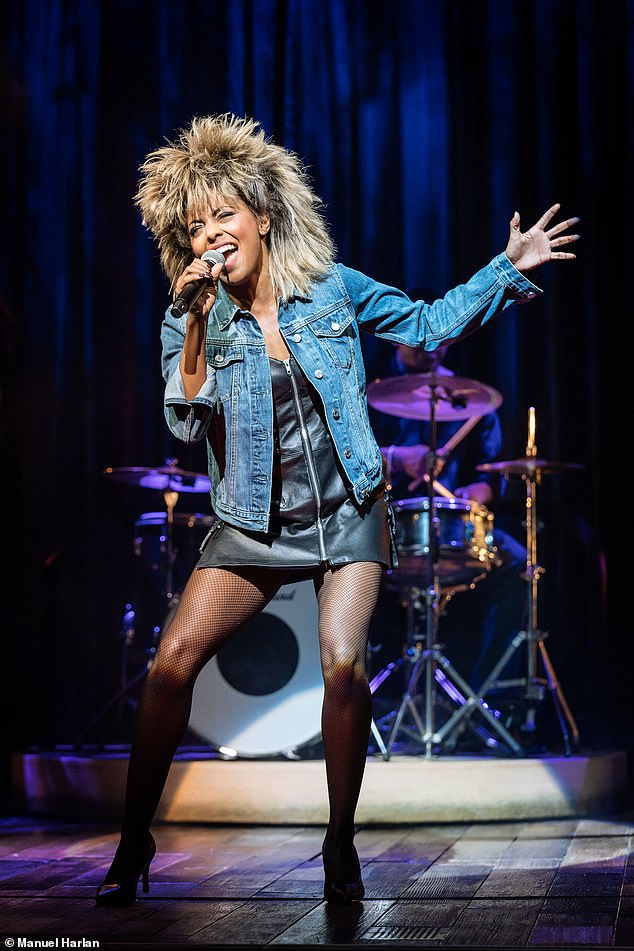 Adrienne Warren (above) gets Tina to a tee with the bow-legged strut, the hand flutters and the paint-stripper voice in this new musical, which comes with Turner’s official seal of approval

Tina’s early mentor was brilliant bandsman Ike Turner (Kobna Holdbrook-Smith, excellent), a vicious cocaine addict who regularly punched her in the face. Theirs was a horribly abusive marriage.

The Ikettes are terrific and director Phyllida Lloyd and choreographer Anthony Van Laast replicate the old routines from those amazing years. 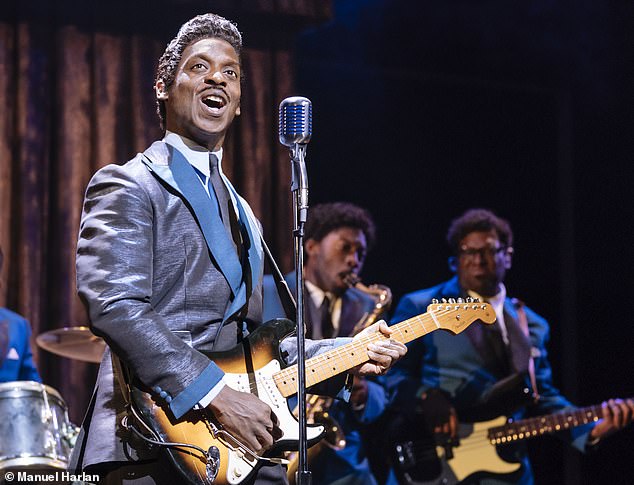 Kobna Holdbrook-Smith (above) is excellent as Tina’s early mentor, brilliant bandsman Ike Turner, a vicious cocaine addict who regularly punched her in the face

After a career nosedive and record-company indifference, we jump to 1984 and the Private Dancer album that brought Turner global super-stardom and that lion wig. She keeps it real with Buddhist chanting.

It’s perhaps when she meets her ­current husband while recording that the evening feels doomed. It’s sweet but lame drama, and a mistake to have an actor play him.

But maybe writer Katori Hall had no choice – you get the feeling Turner and her husband had too much say in this project. 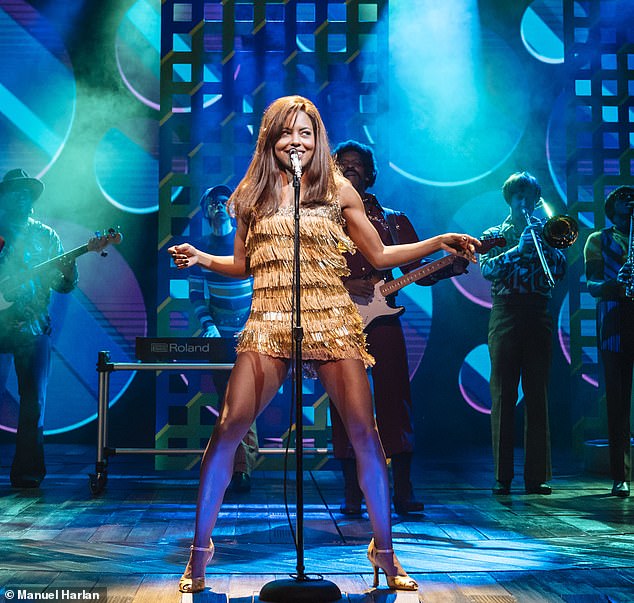 The Sixties scenes are the really joyous bits. From a get-up-and-bop point of view, the encore socks us Nutbush City Limits, Proud Mary and Simply The Best.

Tina fans will love this tribute – but mostly, I suspect, in the bits when the talking stops and the singing starts.

Most parents of a bolshie youngster have probably wondered whether they wouldn’t be better off with a programmable robot child that actually did what it was told. Farewell to sullen looks, poor exam results and bedroom squalor!

Once assembled, the lad (called Jan and operated with a remote) learns good behaviour and they eventually come to love him. 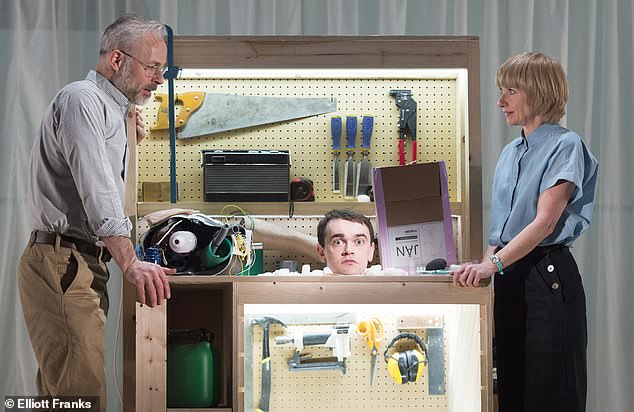 But of course there’s no such thing as the model child. Family life proves immune to perfection and there’s a great scene of a suburban dinner party ruined by Jan’s descent into yobbish vileness when his circuits get jumbled.

Brian Vernel superbly plays both the blank-faced robot and, often confusingly, the wayward absent son the machine has replaced. Grief and comedy intermingle, neither quite gaining the upper hand.

If the script finally runs out of battery, this is a lively new play bustling with ideas and laughs.

It was 47 years before the 1933 film of 42nd Street was turned into a stage musical.

But when it was, they added memorable musical film numbers of the period such as Dames and Lullaby Of Broadway to create a wonderful score. The plot, however, set backstage of a Broadway musical is still pretty thin. 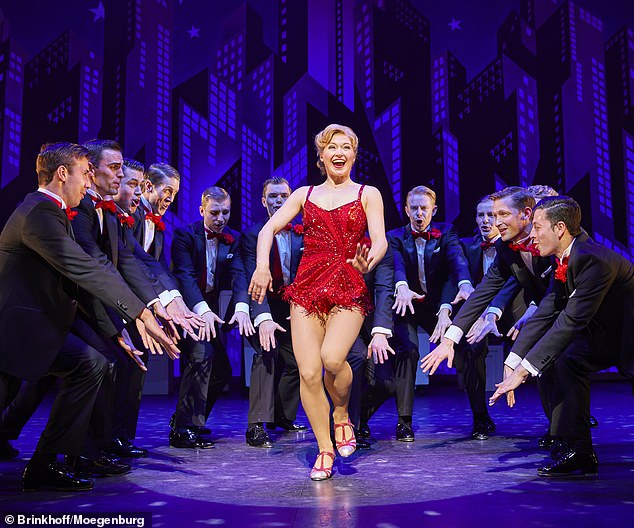 This Olivier-nominated revival saw the casting of Sheena Easton as Dorothy Brock, the ageing diva star of the show whose accident allows plucky young chorine Peggy to shine. Now Lulu has taken over the role.

The Scots trouper is in terrific voice, her smoky tones working well on I Only Have Eyes For You and Boulevard Of Broken Dreams.

‘You’re going out there a youngster but you’ve got to come back a star’ is the show’s famous line, here uttered by former Emmerdale bad boy Tom Lister as the strict director to Peggy. 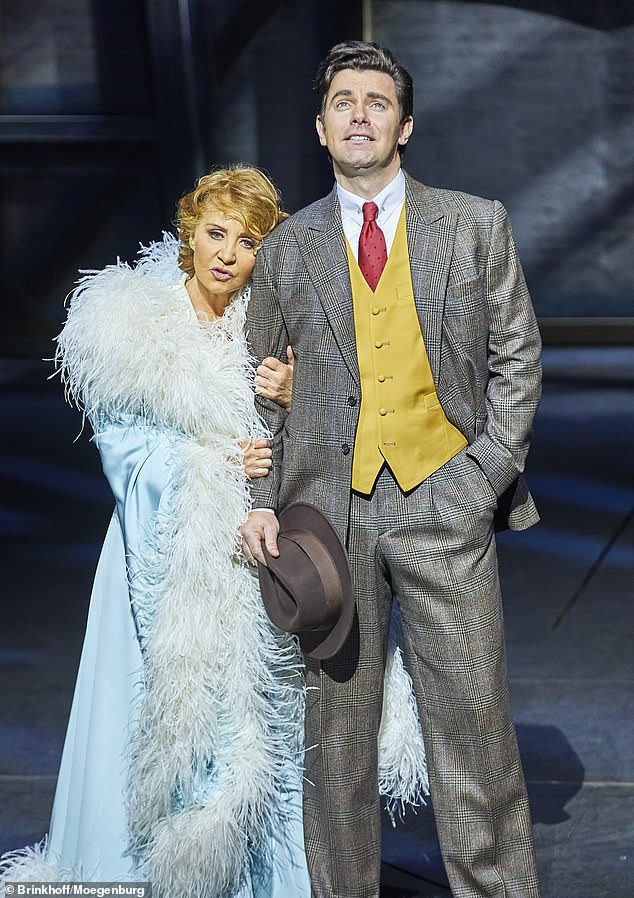 Lulu (above, with Matthew Goodgame) takes over the role of Dorothy Brock, the ageing diva star of the show whose accident allows plucky young chorine Peggy to shine

Clare Halse joyfully dances up a storm as the ingénue thrust into the spotlight. And the dance is the thing in this tap-tastic show, with its endless array of costumes and a lovely Busby Berkeley homage set-piece.

As the huge, sparkly clad cast and their dancing feet slam out the rhythms of the finale title number, there’s enough dazzling power on stage to light both Broadway and the West End.