The student debt dilemma: Is it worth paying off your child’s loan if you can?

Graduates are now leaving university with debts so high they are unlikely to ever pay them off — perhaps even if they go straight into a job paying £48,000.

The cost of getting a degree now lumbers students with a collosal average debt of £50,000, and high interest rates mean most won’t pay it back before the Government automatically wipes it after three decades.

Experts say their parents face a financial conundrum: Should they help repay their child’s loan with a lump sum from their nest egg, or is there a savvier way to invest that money?

Earning a degree now lumbers students with an average debt of £50,000, and high interest rates mean most won’t pay it back before it is automatically wiped after three decades

The Russell Group, which represents 24 top UK universities, has this month said too many students worry about their loans, and should be reassured that the taxpayer was likely to pick up the bill for them eventually.

He says it is ‘financially dangerous’ as the only information it provides is the total outstanding debt and interest added, which may not be the amount they repay.

Mr Lewis wants graduates to be told how repayments actually work and the total cost of the debt over 30 years.

So if you want to help your child rid the debt, what are your options?

Parents who have built up a comfortable retirement fund, may want to lift the burden of debt from their children’s shoulders.

But some may end up wasting hard-earned savings clearing a debt which, in part, will be wiped off anyway.

Laura Suter, personal finance analyst at A.J. Bell, says: ‘Annoyingly for parents there is no easy answer to the question. You need a crystal ball to see what career your child will go into, how much they will earn, and how much their salary will increase.’

If you suspect your child will be a high-earner then paying off the loan could save them tens of thousands of pounds in interest charges.

A.J. Bell says the ‘tipping point’ at which a graduate with a £50,000 loan will pay back more than they have borrowed comes if they start their career in a job paying £28,000.

Someone earning this amount will repay £50,433 over 30 years before £148,062 of interest is erased. Parents might also be tempted to make a part repayment towards the debt instead.

But experts warn this is a false economy. Even if you repaid half of the £50,000 loan, your child still may not clear the rest of debt and interest before the end of the loan term — meaning the remaining debt is wiped clear regardless of how big it is.

We’re helping two children but No.3 is on his own 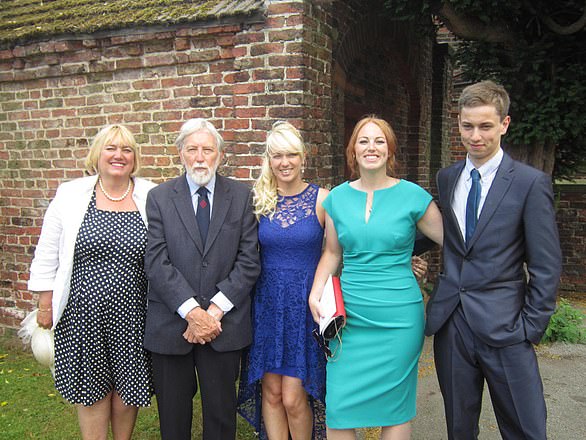 Jackie and John Homan’s three children have all left university with hugely different levels of debt.

Their eldest daughter, Georgina, 34, joined Loughborough University in 2004 when tuition cost little more than £1,000 a year. She left with a debt of around £6,000.

After ten years of building interest and monthly repayments of around £50, Cambridge-based Jackie, 59, and John, 70, a retired air traffic controller, offered to clear the remaining £3,600 themselves and Georgina, now an environmental consultant, paid them back.

When their second daughter Maddy, 31, started her natural sciences degree at Bath University in 2007, tuition fees had risen to around £3,000 a year and she left with a £14,000 debt.

She is now at Southampton University training to be a midwife but this is being subsidised by a bursary.

The couple plan to pay off Maddy’s loan but admit it is a sizeable chunk out of their savings. Maddy would pay them back interest free.

But their youngest, Harry, 21, is one of the new generation of students to be hit with more than £9,000 a year tuition fees.

After starting university in 2017, he expects to graduate from the University of Manchester, where he is studying social policy and politics, owing just under £40,000. Retired teacher Jackie, from Cambridge, says the student loans system is now ‘absolutely disgraceful’ and means they cannot treat their children fairly.

She says: ‘We’re from that generation that if you borrow money you pay it back and for small amounts of our children’s debt we can afford to do that.

Harry’s student debt, however, will be too much of a stretch so he will have to repay the loan himself monthly.’

Instead of giving away retirement savings, parents can choose to set up an informal arrangement where their child pays them back — possibly without interest.

This way, parents can recoup their money over time, rebuilding their own nest egg, while their child is not burdened with spiralling interest.

However, an informal agreement is just that. If your son or daughter wants to take time off work to travel, loses their job or there is a family fall-out, it may hamper your chances of getting all your money back.

A formal legal agreement will give you a greater guarantee that your money will be repaid. But it could affect your child’s ability to get a mortgage because the monthly loan repayment will be regarded as a financial commitment when any lender does an affordability check.

Once you have repaid all or part of the loan, you cannot get the money back. But could that money be more useful to your family if invested smartly?

Ms Suter says: ‘If you invest the money in a stocks and shares Isa it could grow to be a considerable savings pot for your child’s future.’

After 30 years, the maximum term of a student loan, they would have £216,097 and the debt will also have been wiped.

Rather than spend £50,000 clearing student debt, your savings could be used to help your child to buy their first home.

Last year, the average first-time buyer deposit in the UK was £49,400 according to Savills’ analysis of industry data.

This would secure a first-time buyer a home worth £215,700. Average house prices in the UK excluding London, are expected to rise by 15 per cent over the next five years, according to Savills. 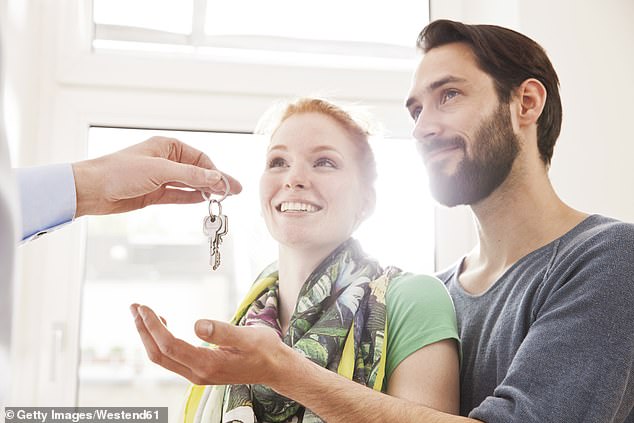 Last year, the average first-time buyer deposit in the UK was £49,400 according to Savills’ analysis of industry data

London buyers are only expected to see their property value increase by 4.5 per cent in five years — increasing the value of your deposit to £52,250.

Lawrence Bowles, Savills residential research analyst, says: ‘Not only will graduates accumulate equity over a five-year period they could potentially pay less per month than they would if they rented.

‘But buying a property is more than just an investment. They will have increased certainty over payments and security compared to those who rent.

‘On the other hand, they’ll also take on responsibility for the costs and work involved in maintaining the property.’

Critics say student debt is not a loan at all, rather a graduate tax they will have to accept and pay most of their career.

Lynn Parker, 60, from Nottingham, has no intention of clearing any of her daughter Rowan’s £53,000 debt.

Rowan, 21, graduated in 2017 from a ballet school in London and now works as a self-employed dancer.

Lynn, who works in her husband Alan’s joinery business, adds: ‘My daughter only gets paid when she is dancing and sometimes there are spells when she is in between jobs.

‘She will never earn enough to pay back the loan. I say let it roll and write it off after 30 years.’ Although Lynn says she is grateful Rowan had access to student finance, she says the interest charges are ‘unreasonable’.

According to Lynn’s calculations, the loan will accrue at least £2,780 in interest this year, and more next year as the balance grows. 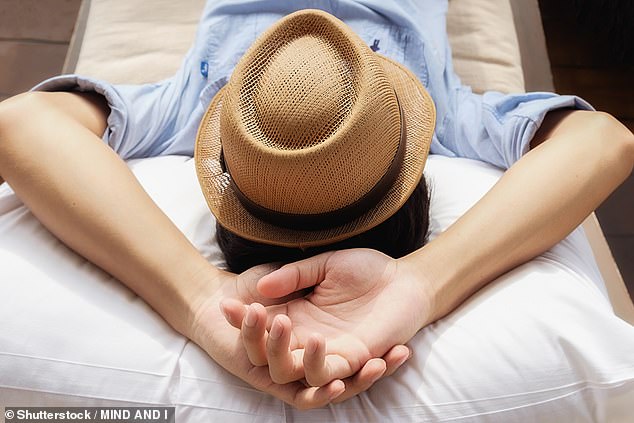 Critics say student debt is not a loan at all, rather a graduate tax they will have to accept and pay most of their career

Lynn is not alone in her view that she should not have to contribute to her children’s university costs.

A survey by investment manager Charles Stanley found 70 per cent of parents had not or did not plan to give their children money for school or university fees.

He says: ‘If the monthly payments are manageable for the children, parents should prioritise their own retirement and the possibility of care costs above repaying student loans.’

However, paying only the minimum monthly repayments not only increases the total cost of the loan, it can also affect your chances of getting further credit.

Most mortgage lenders take into account borrowers’ monthly student loan repayments when they decide on the size of the mortgage they will offer.

Shaun Church, director of mortgage broker Private Finance, says he has seen applications rejected because of how much student debt a couple might have, combined with their other borrowings.

His advice is to pay off debt as soon as possible because it can have an effect on your ability to borrow more money in the future.

If you have decided not to use your savings to clear the loan, but your child does not want to be saddled with the debt for 30 years they can make overpayments to clear it sooner.

Next year SLC will be providing customers with a more up-to-date view of their student loan repayments through their online account.

Scottish students attending university in Scotland can be charged up to £1,820 per year for tuition but may be eligible for a grant to pay this in full.

How to make sense of repayment rules

● Graduates start making repayments when they earn more than £25,725.

● Minimum repayments are based on 9 per cent of any earnings above the £25,725 threshold.

● Interest rates are tied to the Retail Price Index (RPI) measure of inflation in March the previous year — currently 3.3 per cent. In March 2019 inflation was 2.4 per cent so interest rates will fall in September.

● While studying, interest is charged at rate of inflation plus 3 per cent until April 6 after course completes.

● Interest then falls to match rate of inflation until students earn over £25,725 and rises on a sliding scale to £46,305 to total inflation plus 3 per cent.

Applies to student loans taken out in England and Wales from 2012.