Around 80,000 men in England have an abdominal aortic aneurysm, a potentially life‑threatening bulge in the aorta (the main blood vessel that runs from the heart to the abdomen). Thomas Smart, 81, from Beverley, East Yorkshire, was one of the first in the world to receive a new graft to treat it, as he tells Adrian Monti.

My first and second abdominal aortic aneurysms (AAA) were found by chance — the first during an ultrasound scan during a check-up following prostate cancer surgery two years before.

It wasn’t causing discomfort but my doctor said it would grow and could eventually burst. I was monitored for about 18 months until it reached 5.5cm, when my consultant advised operating.

I had open surgery under general anaesthetic in October 2010 to repair my aorta. After making a 30cm (12in) cut, the surgeon used a graft, a man-made tube, which he sewed inside the ‘bulging’ part of the artery to strengthen the wall and allow blood to flow through it. I stayed in hospital for ten days and it took about six weeks to regain my strength.

Then, in 2020, I developed pains in my stomach, which turned out to be caused by polyps in my bowel. Scans to diagnose this also revealed a second aneurysm which I was told could be complex to treat.

Thomas Smart, 81, from Beverley, East Yorkshire, was one of the first in the world to receive a new graft to treat it, as he tells Adrian Monti

I was referred to Dr Raghu Lakshminarayan, who told me the second aneurysm was expanding fast.

This time I was offered a new type of man-made graft which I’d be among the first in the world to have. He said the graft would be inserted via small cuts at the top of each thigh and near my left shoulder. It would then be assembled inside me.

I had a four-and-a-half-hour operation in October 2020 and should have spent four days in hospital, but was in for 12 after getting pneumonia.

I had a scan last year and will have another this October. I’m reassured it’s fixed and I can get on with my life with my partner Jackie, which will include a holiday this summer.

All men in the UK are invited to attend a NHS screening at 65 to check for an AAA, to reduce the risk of death due to a rupture.

If an aneurysm is more than one-and-a-half times the aorta’s normal size (3cm in diameter), it’s defined as enlarged and requires planned surgery.

An AAA is thought to be caused by the artery furring due to ageing, smoking and high blood pressure, but the condition also runs in families. It’s three times more common in men than women, affecting around 4 per cent of men aged 65 to 74. There are usually no obvious symptoms.

If a swelling is detected, it will be regularly scanned as the worry is that it will burst, which can prove fatal in 80 per cent of cases, causing around 6,000 deaths in England each year.

Repairing aneurysms is traditionally done by open surgery — a major operation with some risks.

Under a general anaesthetic, a large incision is made down the abdomen before the aorta is clamped to stop the blood flow during surgery. The aneurysm is opened, and a graft (specific in length to the patient’s particular aneurysm) made of a flexible tube encased in a polyester fabric, is inserted — this acts like the artery wall and the aneurysm will stay the same size or shrink. After the surgery, the patient typically spends nine days recovering in hospital.

But in the past three decades, a technique called endovascular aortic aneurysm repair (EVAR) has also been used. It involves keyhole surgery using a graft that has a metal scaffold inside it, allowing it to be compressed very tightly and inserted via a catheter tube into a tiny hole made in the patient’s groin. 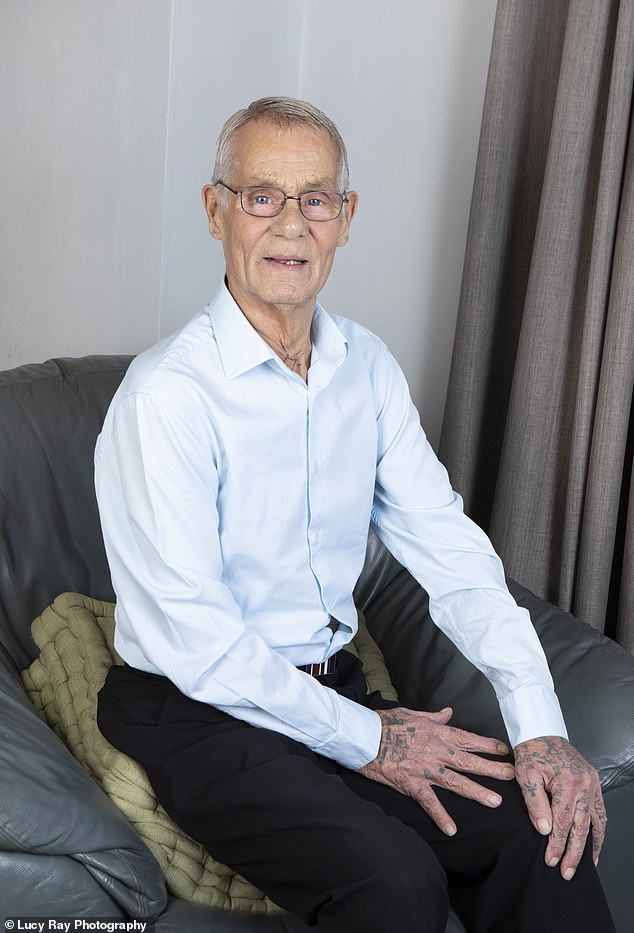 Once at the site of the aneurysm, the graft expands to fit tightly like a cork in a wine bottle and acts like a liner to strengthen the weakened artery wall. Research shows this type of operation is less risky than open surgery — reducing the risk of death by nearly a third in the first month after. Also, the patient spends only three or four days in hospital.

These two types of surgery work for most patients, depending on the position of their aneurysm.

If the aneurysm is below the two kidney arteries on either side of the aorta or the patient has already had it repaired before, this can cause a problem, as was the case with Thomas — there was insufficient space left above his original graft to fit a standard second graft without blocking off the kidney arteries.

Normally, we would not be able to offer a safe option and Thomas’s aneurysm most likely would have eventually burst. But in 2019, Oxfordshire-based company Lombard Medical asked me to work with its team on a new design of graft to overcome this problem.

Instead of a traditional graft (which resembles a tiny pair of trousers with a waist) we decided to adapt an existing graft — 9cm in length — made of two tubes that are not joined together but sit side by side in the aorta leading to smaller tubes which supply blood to the legs.

The graft is the first of its type in the world. We used CT scans and 3D-model printing to make an exact glass model of Thomas’s aortic aneurysm so we knew exactly where to place the graft, which we had made specifically.

As with all AAA repairs, patients will have an annual scan to check the graft is in place, and medication for life to stop blood clots.

Covid-19 slowed down the new graft being used more, but I’ve so far used it on another NHS patient and observed one being done in Doncaster. Eventually we hope to design a few ‘off-the-shelf’ grafts to use on patients with similar sorts of aortic aneurysms.