The Trumps fly in for SpaceX’s first manned launch

They traveled to Florida with family members including Ivanka Trump and husband Jared Kushner, Donald Trump Jr. and girlfriend Kimberly Guilfoyle, Eric Trump and wife Lara Trump, along with some of the grandkids.

Air Force One flew over the launch site before landing in Cape Canaveral, Florida.

The Trumps had left the White House shortly after lunch, with the president skipping a Q&A with the gathered press, holding the first lady’s hand as they boarded Marine One, neither wearing face masks. She put one on while inside the helicopter.

Vice President Mike Pence and second lady Karen Pence had traveled ahead to the Kennedy Space Center, where astronauts Bob Behnken and Doug Hurley will be the first to launch from American soil since the end of the Space Shuttle program, which concluded nine years ago.

The president and first lady joined up with the Pences upon their arrival, touring NASA’s Florida headquarters.

‘Good luck, God be with you, it’s a dangerous business, but they’re the best it is,’ Trump told reporters was his message to astronauts Hurley and Behnken. 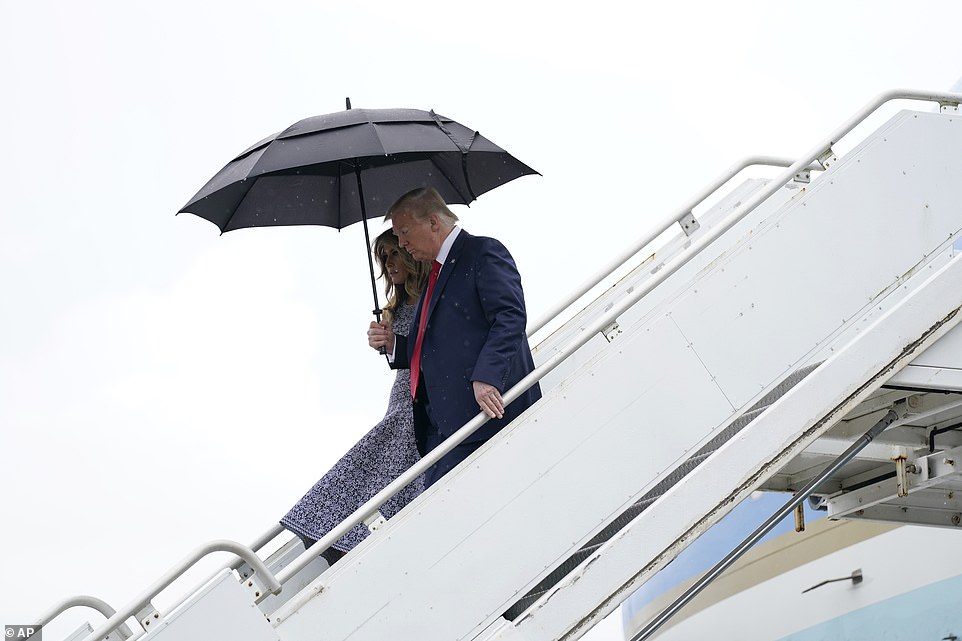 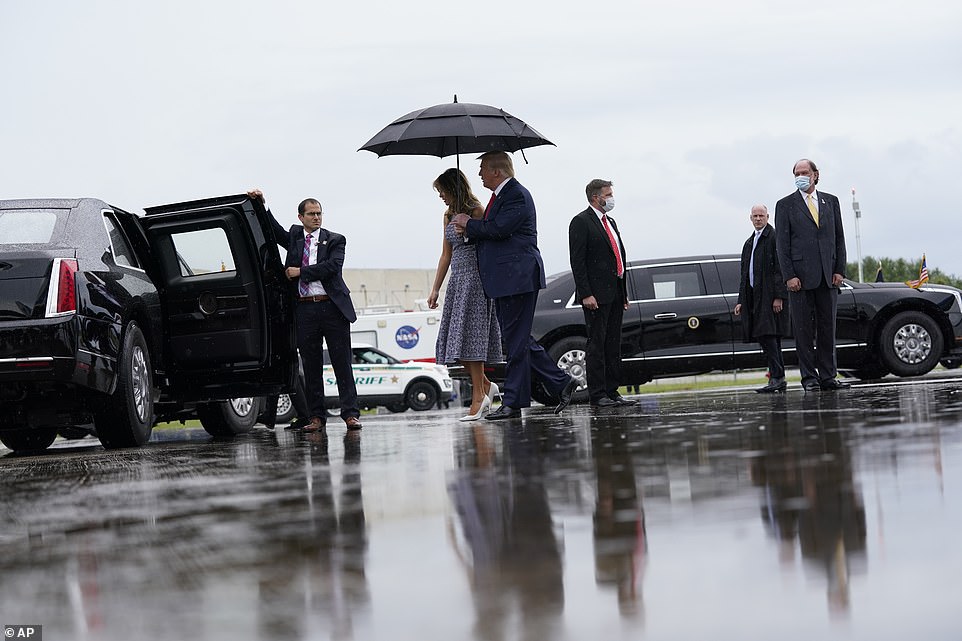 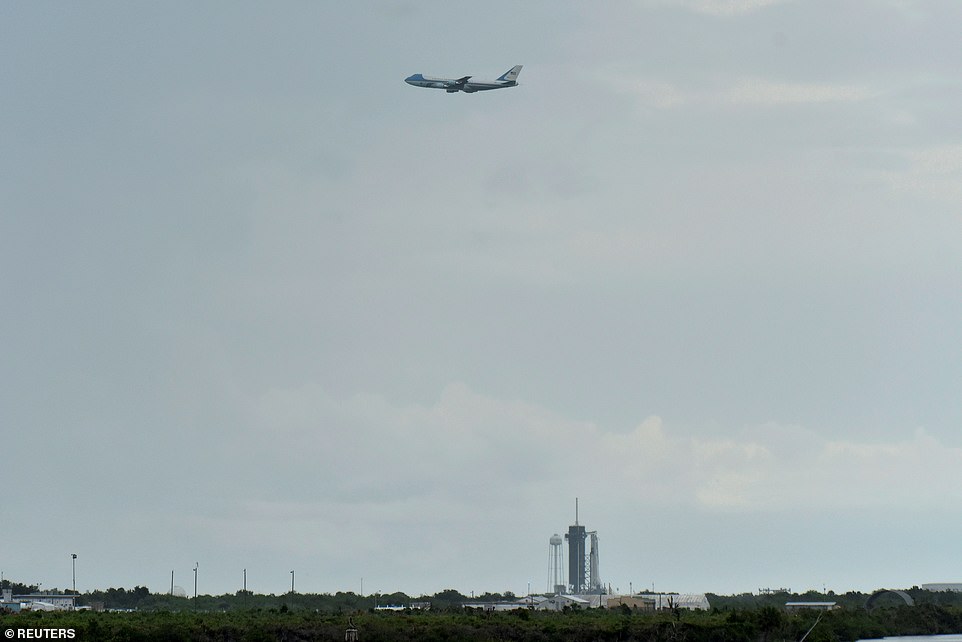 Air Force One flies over the Kennedy Space Center as the president and first lady arrive to watch the launch of the SpaceX Falcon 9 rocket and Crew Dragon spacecraft take two American astronauts into space for the first time on U.S. soil for nine years 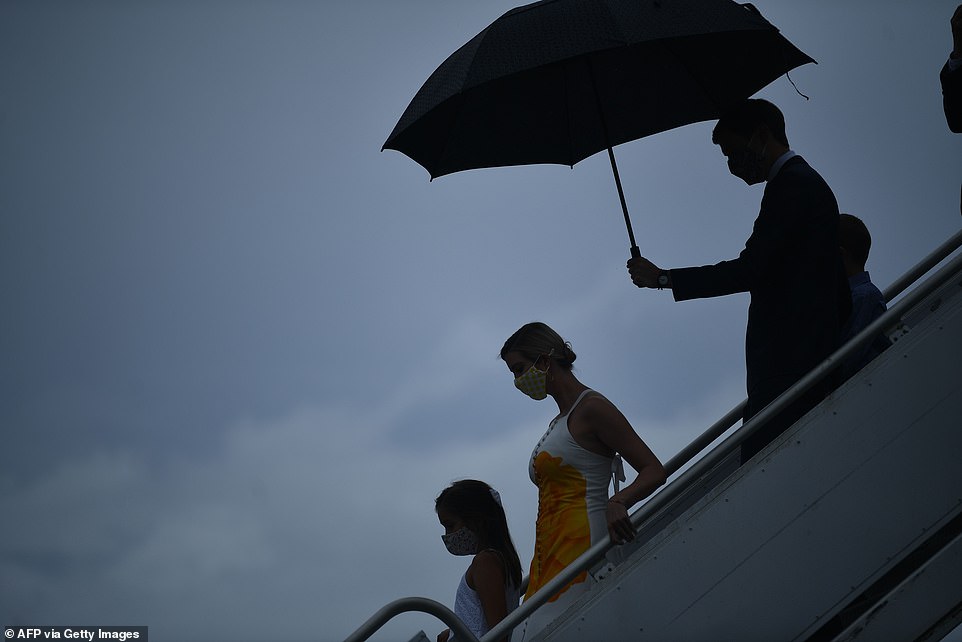 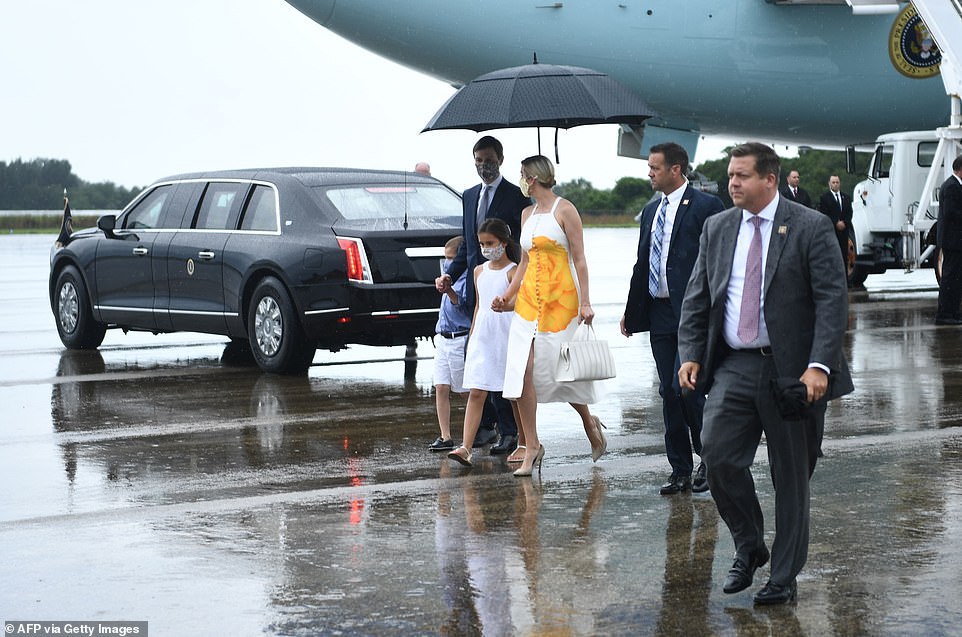 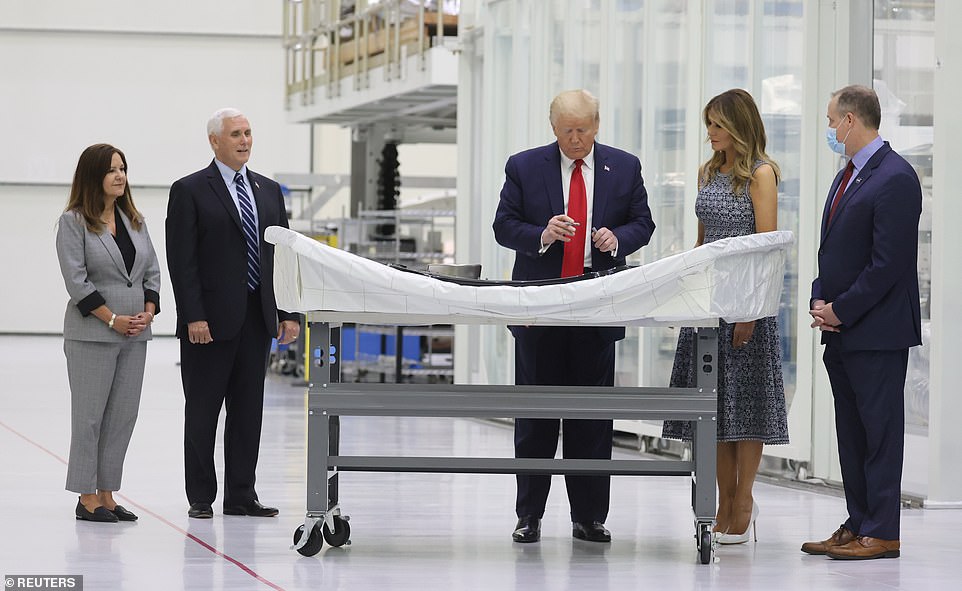 Upon arrival, President Trump (center right) and first lady Melania Trump (right) linked up with Karen Pence (left) and Vice PResident Mike Pence (center left) four a tour of the Neil Armstrong Operations and Checkout Facility at the Kennedy Space Center. Trump signed a piece of equipment on the tour 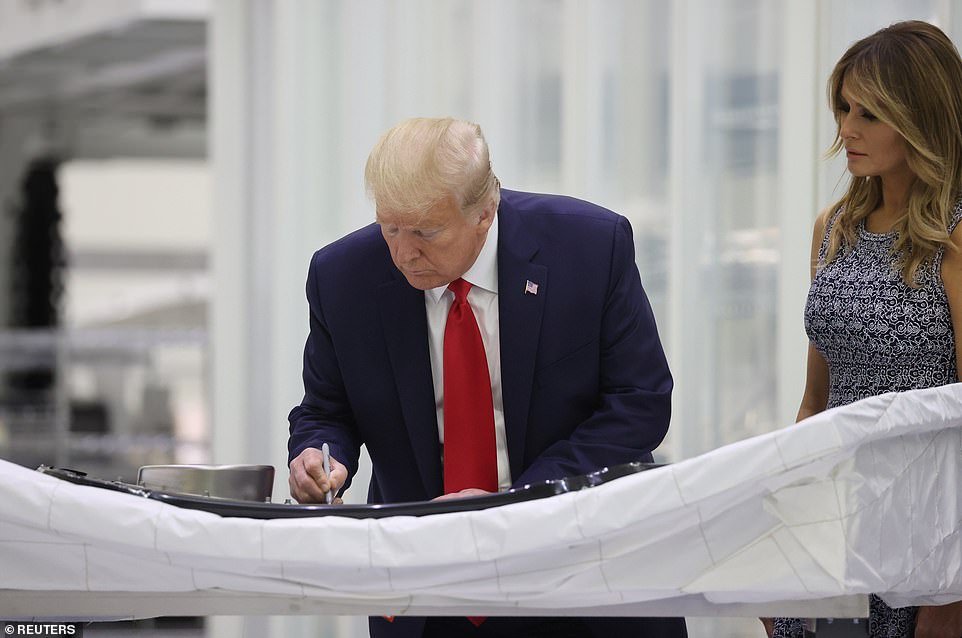 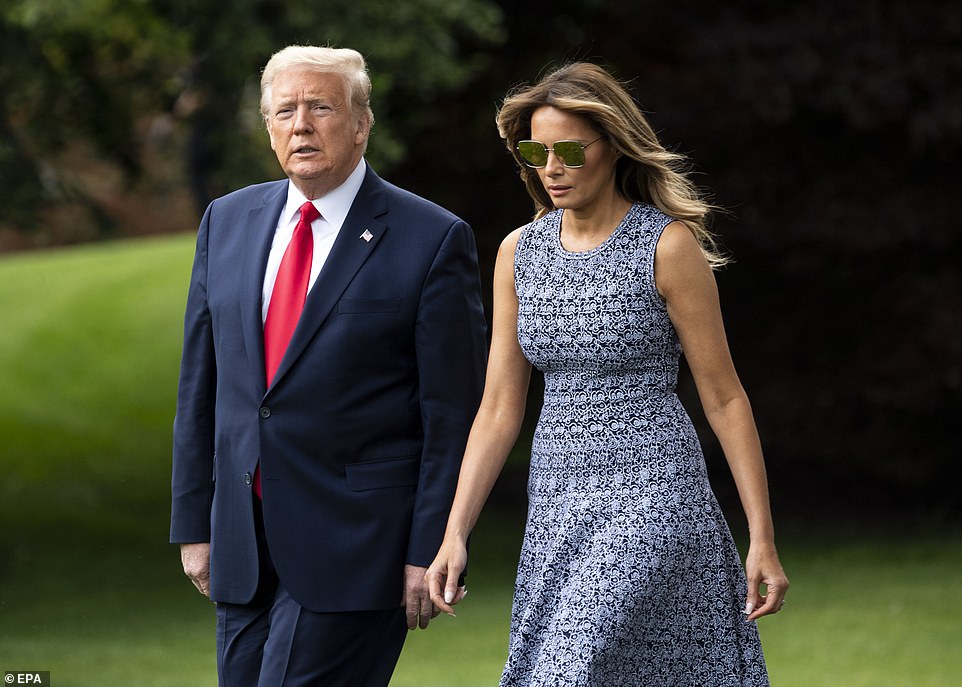 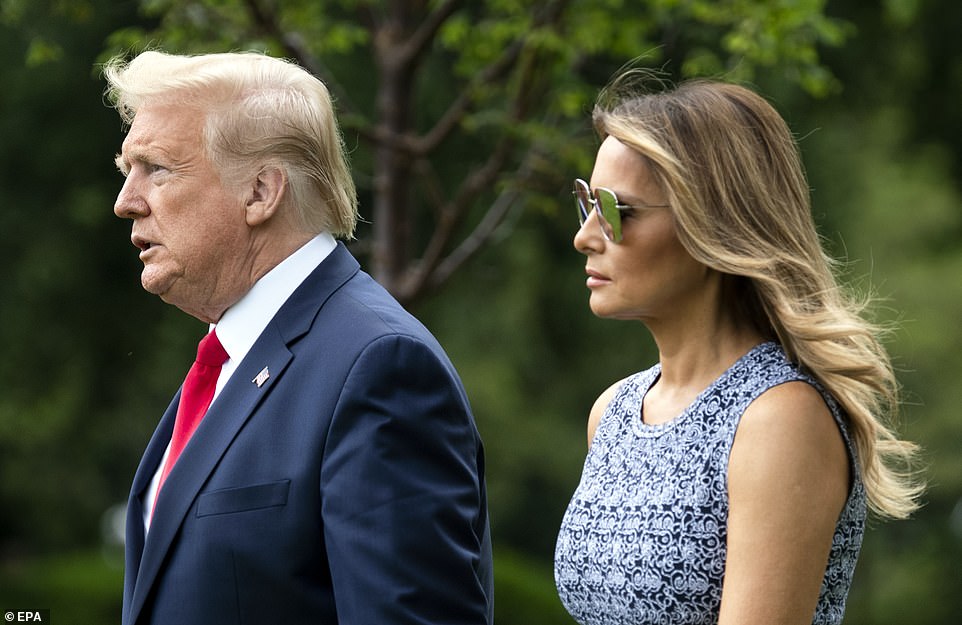 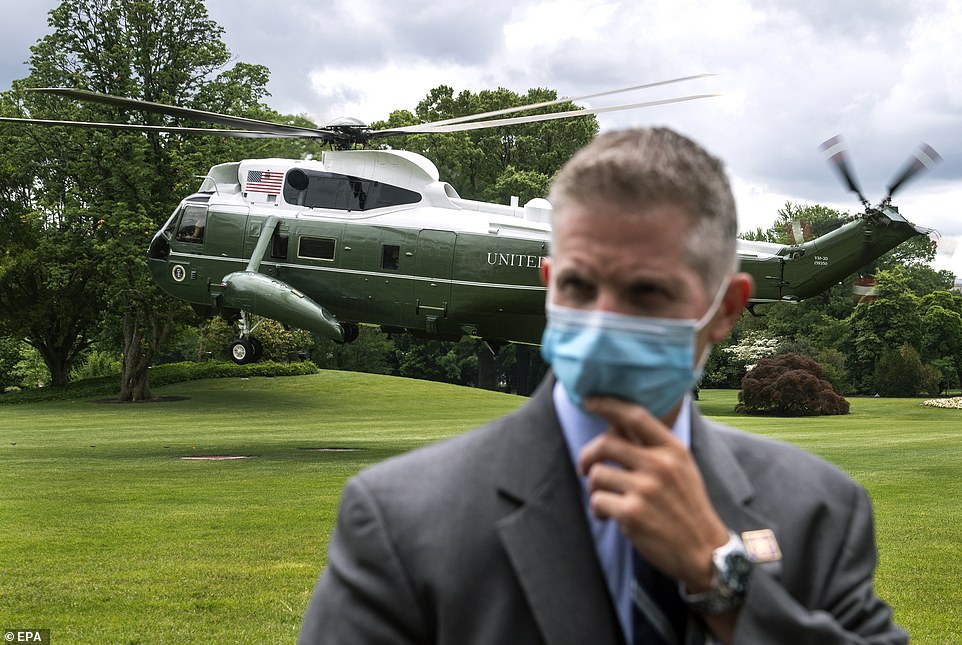 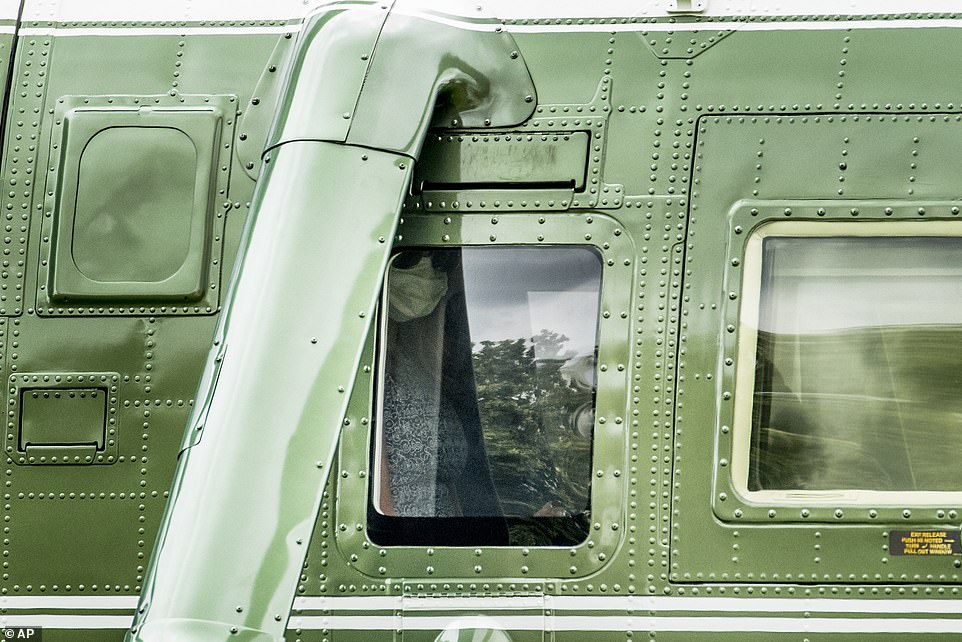 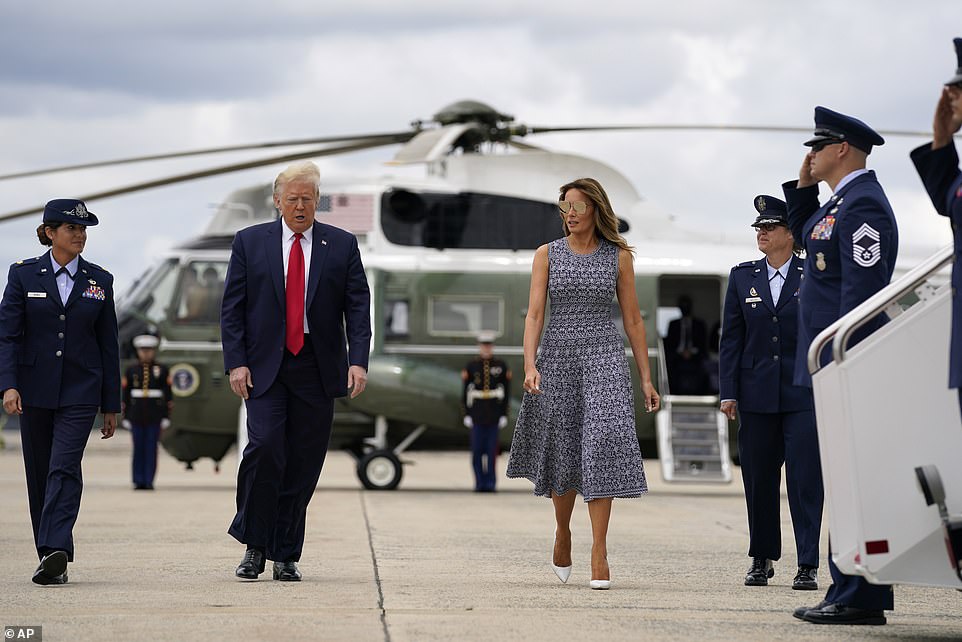 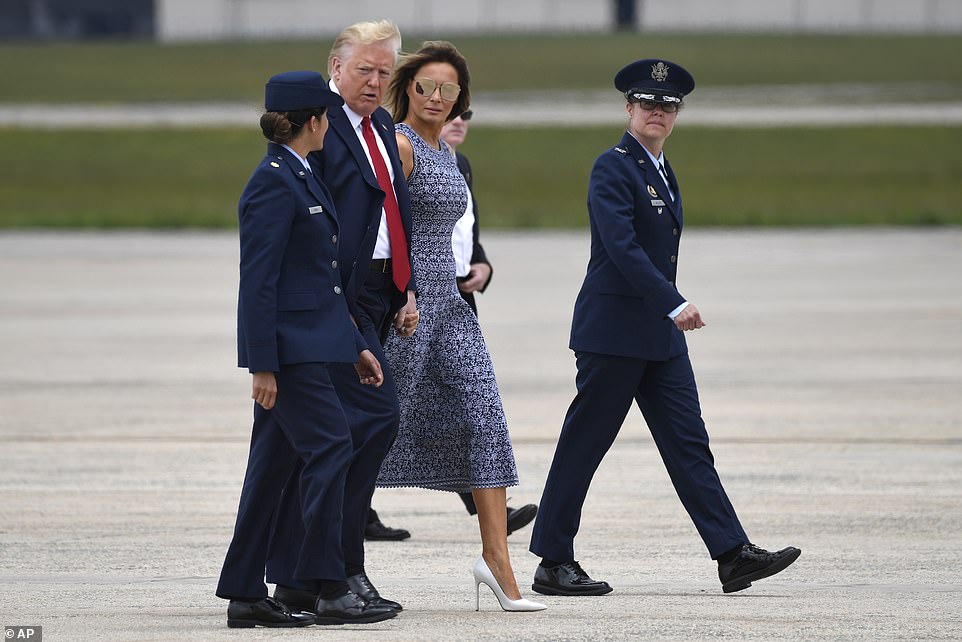 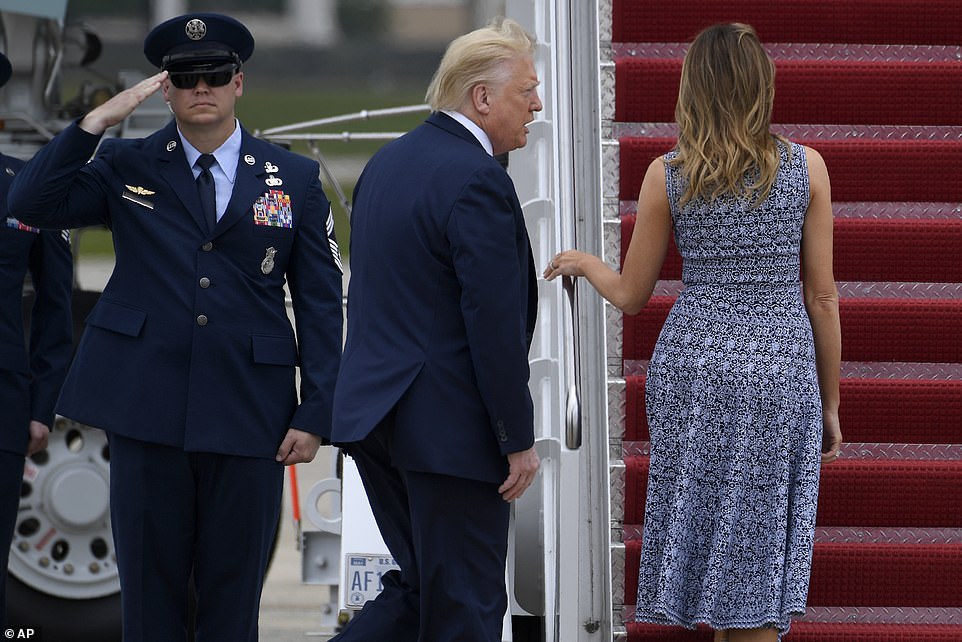 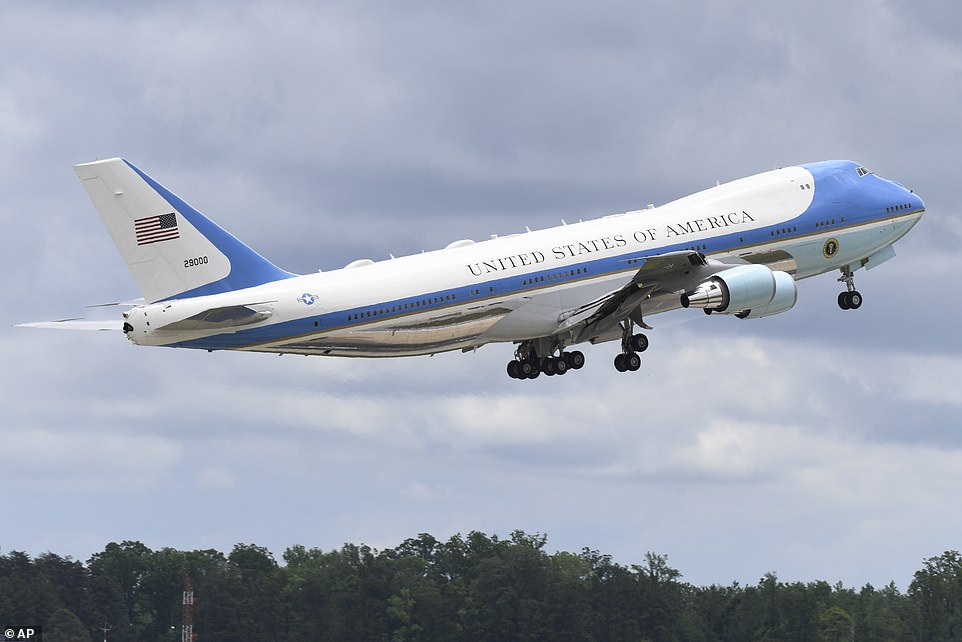 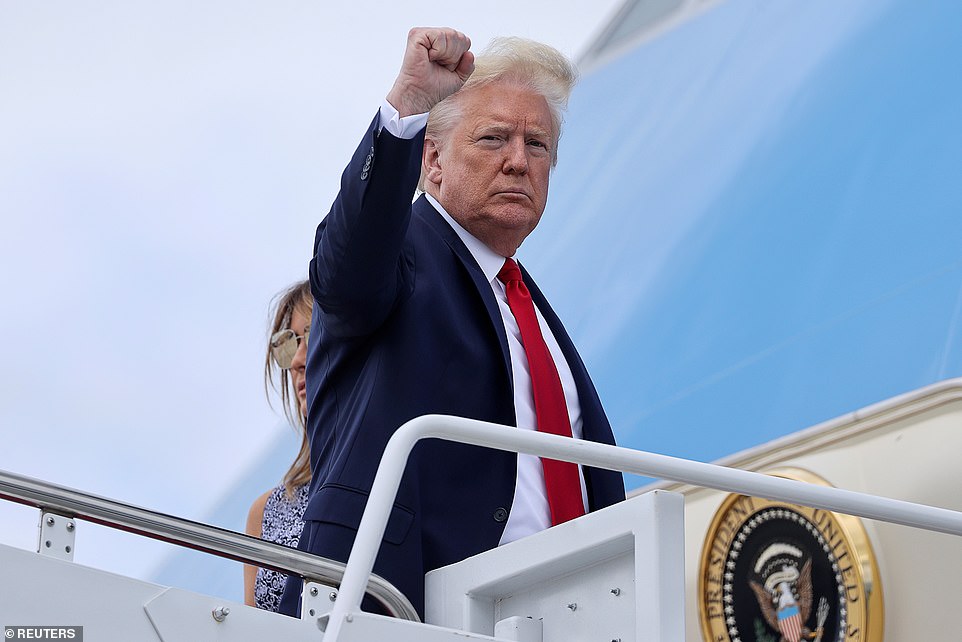 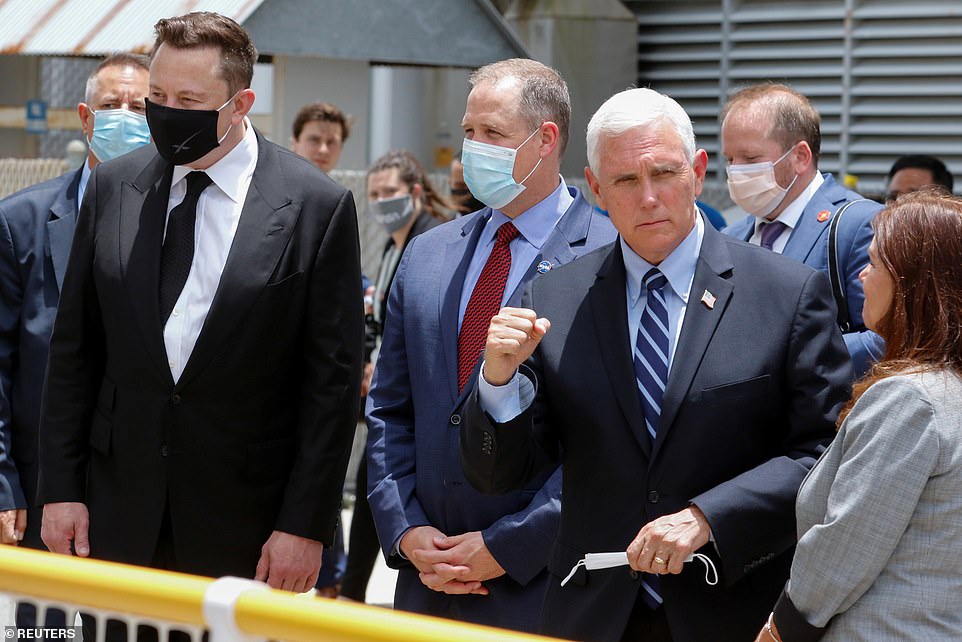 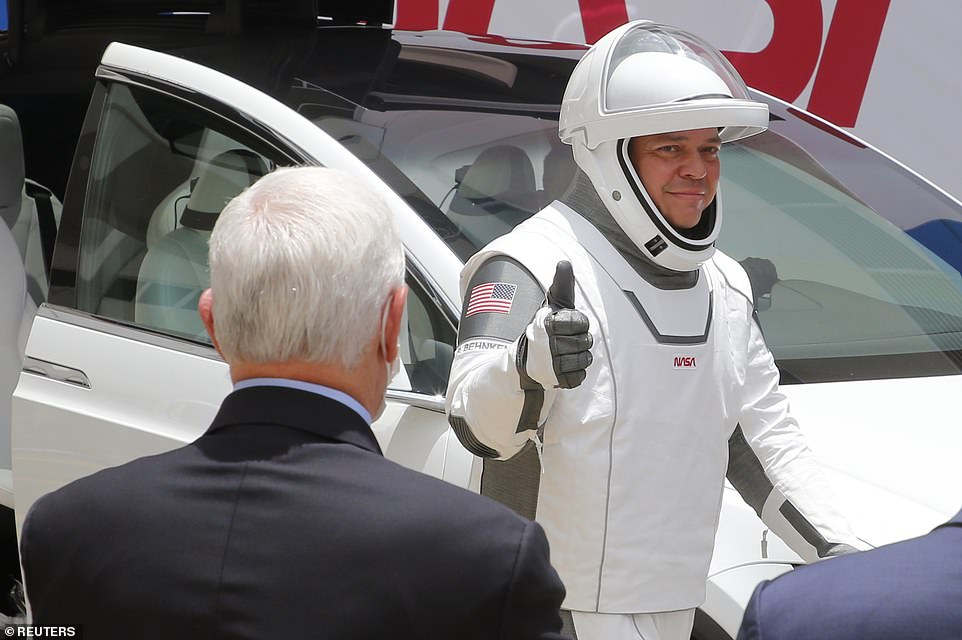 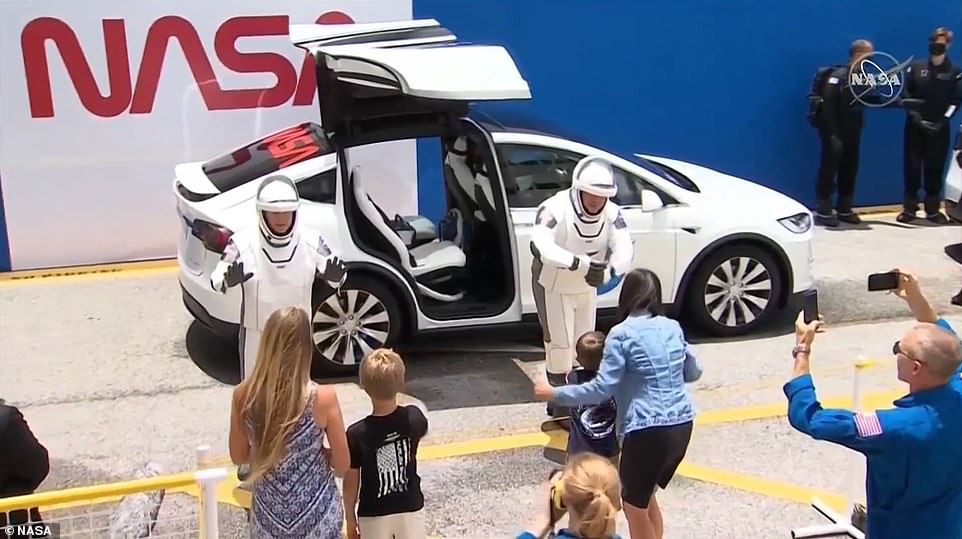 NASA astronauts Bob Behnken and Doug Hurley said goodbye to their families and then boarded a Tesla Model X, which is the other company associated with SpaceX founder Elon Musk 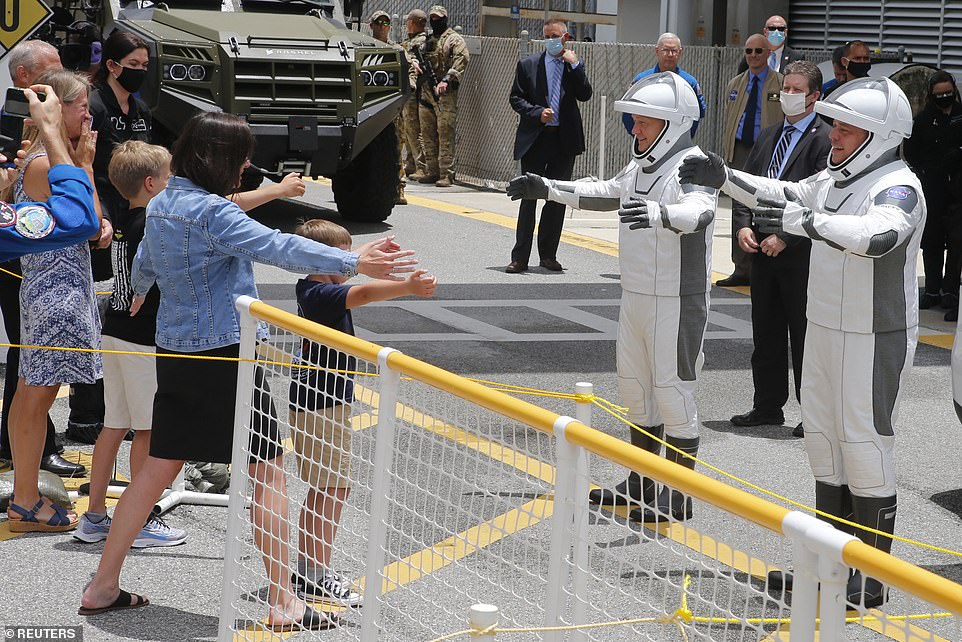 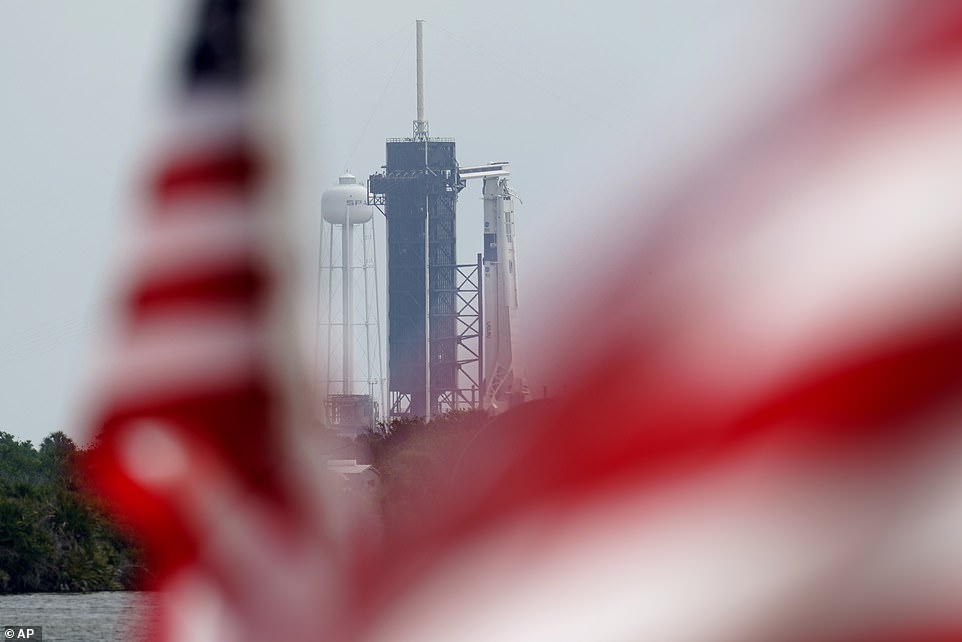 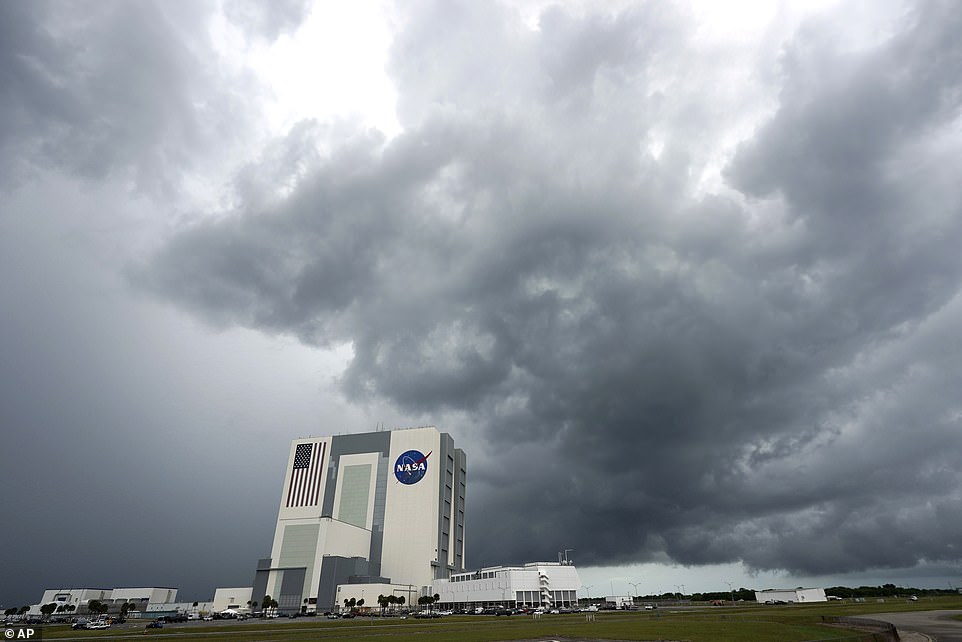 Storm clouds pass over the Vehicle Assembly Building at the Kennedy Space Center. Weather could potentially delay Wednesday’s launch of the SpaceX Falcon 9 rocket and the Crew Dragon spacecraft

Hurley was the pilot of the final Space Shuttle mission. In recent years, American astronauts have had to travel to the International Space Station on Russian rockets.

The Wednesday launch will mark the fifth time in history the U.S. has launched American astronauts in a new rocket system. It’s also the first time the rocket has been made by a private company.

The Pences, who had face masks and wore them for part of the time, stood alongside Behnken, Hurley and their families as the astronauts said goodbye Wednesday afternoon.

The astronauts’ mission is expected to last between one and four months.

They then got into Tesla Model X cars, the other company associated with SpaceX founder Elon Musk.

The white Teslas had NASA’s ‘worm’ logo on the rear window and spherical blue logo on the sides.

Musk, also in a mask to prevent the spread of the coronavirus, stood nearby.

The SpaceX Crew Dragon capsule will take off from Launch Pad 39A, the same facility used by Neil Armstrong and the Apollo crew for their historic voyage to the moon.

While waiting for the Trumps arrival, the Pences toured Launch Complex 34, where the Apollo 1 fire occurred in 1967, killing three astronauts.

The vice president and Karen Pence left flowers underneath the memorial plaque alongside Sheryl Lyn Chaffee and Chaffee’s spouse Grady Thomas. Chaffee was the daughter of Roger B. Chaffee, one of the astronauts who died.

Lift-off is scheduled for 4:33 p.m., though weather could postpone the launch. A rescheduled launch would take place Saturday.

A tornado warning was issued by the National Weather Service for Brevard County, where Kennedy Space Center is located, with less than three hours to go before the launch.

Both Pence and Trump will deliver remarks from the Kennedy Space Center after the launch.

Wednesday’s trip to Florida will mark Pence’s second time in the state in a week.

He traveled to Orlando last Wednesday to talk about economic reopening as cases of coronavirus in the U.S. decrease with Florida Gov. Ron DeSantis, restaurant owners and hospitality and amusement park bosses.

On this trip, Pence talked excitedly about coming back for the rocket launch, while DeSantis hinted Trump could come too.

On May 5, Trump started traveling again and has made a weekly trek to a swing state since.

He needs to do so again and keep Pennsylvania, Michigan and Wisconsin in his column in order to earn a second term.