Animal lovers will know the life-affirming impact a pet can have on wellbeing and mood — and service animals such as guide dogs are an established part of the medical landscape. But it’s not just dogs. Less obvious candidates including donkeys and parrots are helping people too. Libby Galvin meets some — and learns about the vital aid they provide….

‘When Tiffany was born, they told me she would never walk or talk,’ says her mother Lisa Payne, 42. ‘I used to sit and cry, thinking I was never going to hear my baby’s voice.’

That was 21 years ago. Today, despite a diagnosis of global developmental delay, autism, hypermobility, dyspraxia, sensory processing disorder and a learning disability, Tiffany is able to walk, talk and ride — and now works to help others with disabilities.

And it’s all thanks to a relationship with horses that began quite by chance.

‘When Tiffany was eight, I took her to the stables where my sister Lucy had horses,’ says Lisa. ‘She couldn’t walk a few steps without falling down. But we’d put her on a horse, lead her around on him and sing Old Macdonald Had A Farm.

‘That year, she turned nine and learned 100 words — the specialists at Great Ormond Street couldn’t believe we’d got her to talk.’

Those first words began with Tiffany ‘clicking’ to get the horses she loved to follow her. Slowly, clicks became noises and noises became words.

She achieved at the stables what she hadn’t managed in four years of school, soon speaking with confidence to family, friends and even strangers.

Today, despite a diagnosis of global developmental delay, autism, hypermobility, dyspraxia, sensory processing disorder and a learning disability, Tiffany is able to walk, talk and ride — and now works to help others with disabilities

Seeing the change in Tiffany prompted Lisa and Lucy to set up TEAL Equine, the horse therapy centre in Oxted, Surrey, where they, four horses and a small team of volunteers run educational courses for children and adults with a range of needs including autism and epilepsy.

Some courses are funded by TEAL, with others paid for by schools, care homes and colleges. Tiffany now works with her mother and aunt, helping about 40 clients a week.

Tiffany’s closest bond is with rescue horse Jigsaw (both pictured above) who helped her return to riding aged 11, after a fall, and has seen her speech and motor skills develop further over the years.

‘Horses are incredibly responsive,’ says Lisa. ‘If your heart is racing, they will know — they can sense a human heartbeat from four-and-a-half feet away — but they can also soothe those around them.’

Hundreds of children over the past ten years have benefited from learning with Jigsaw — grooming and even painting her during therapy workshops, as well as learning stable skills and spending time with her.

Isla, a four-year-old miniature Mediterranean donkey (pictured with Alfie the pony), brings happiness to nursing home residents, including those who have Alzheimer’s.

Her visits become something of a conversation piece at Merevale Care Home in Atherstone, Warwickshire — for example, prompting memories of riding donkeys on the beach.

The beauty of her size is that she can easily get in and out of lifts, and pick her way around beds.

Despite having a reputation for being stubborn, donkeys are ‘curious, empathetic and very trainable,’ says Sara Hibberd, 52, who runs Leicestershire-based animal therapy company Alfie the Therapy Horse and Team.

The training for therapy animals can take years; Isla is still young and learning, so she brings something of a party atmosphere to her rounds.

‘The best thing about Isla is how mischievous she can be,’ says Sara.

‘She will rest her head on residents’ shoulders. If they have a cup of tea or a piece of cake, she will nestle in and try to take it off them — she’s naughty and inquisitive! But this always puts residents in high spirits and makes them laugh.’ 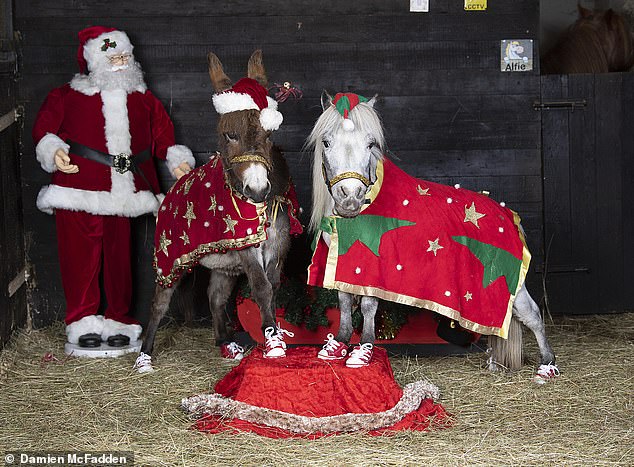 Isla, a four-year-old miniature Mediterranean donkey (pictured with Alfie the pony), brings happiness to nursing home residents, including those who have Alzheimer’s

Every fortnight, two-year-old Kristoff (pictured with owner Sara Hibberd) hops into his specially designed pushchair and visits his many friends at the unit, lots of them struggling with issues such as self-harm.

‘He’s huge — he weighs about 14lb,’ says one of his minders, Jacqueline Clissold, 69, a retired chiropodist who volunteers at the unit.

‘When he stretches out, he can be 3ft long. But he’s a sweetheart.

‘Every fortnight he visits a particular group of children, aged 12 to 18 — you can see the happiness in their faces when he arrives. I think they find it easier talking to a rabbit than talking to other people: you get a lot of happy tears.

‘He makes even the most anxious teens relaxed, as if he passes on his placidness to them.

‘As he is quite heavy, having him sitting on you can be a bit like resting under a furry weighted blanket. The children don’t want us to take him away at the end of the day.’ 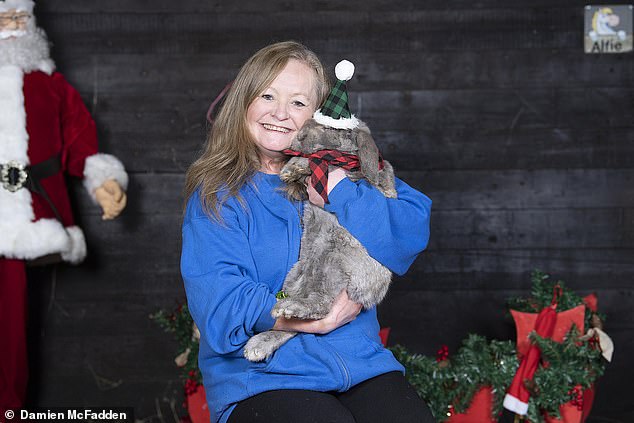 Every fortnight, two-year-old Kristoff (pictured with owner Sara Hibberd) hops into his specially designed pushchair and visits his many friends at the unit, lots of them struggling with issues such as self-harm

Cats are naturally independent — so not the first creatures you would think of as suitable therapy animals.

Yet Max (pictured), a tabby from Harrogate in North Yorkshire, has been a constant companion to his owner, 17-year-old Jessica Swift, since she was nine.

Jessica has a chromosomal disorder, autism, epilepsy and learning disabilities — and as well as providing her with constant companionship, Max alerts the family when Jessica has seizures.

As her mother Zoe, 44, explains: ‘Max will run to find me when he realises Jessica is unwell.

‘Her seizures usually occur when she’s asleep — she can go months without any, then have quite a few in a short space of time. Jessica has a seizure alarm wired up to her bed — when I respond to it in the night, I’ll find Max on the landing on his way to warn me. It’s quite amazing. 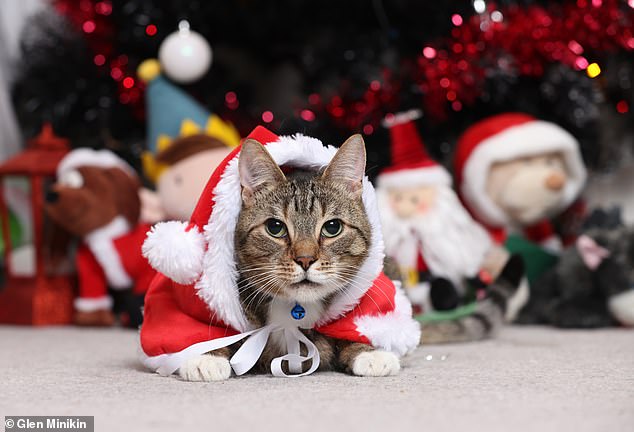 Max (pictured), a tabby from Harrogate in North Yorkshire, has been a constant companion to his owner, 17-year-old Jessica Swift, since she was nine

‘The first time this happened, when he was a kitten, I couldn’t believe it.

‘Now he and I sit with her as she has her seizure. Max positions himself so he can see her from the floor; once the seizure stops, we’ll make sure she is conscious and responsive. Max will then lie on her bed with her until the morning, like a little guardian angel.’

The cat overcomes pain in his own small limbs to help Jessica — he was hit by a car two years ago, which left him ‘sore and stiff like a little old man’, says Zoe.

Jessica looks after him, feeding him and giving him his daily tablet (for a heart condition).

‘Max always jumps into her arms as soon as she gets home,’ says Zoe. ‘It gives me peace of mind to see them take such good care of each other.’

On October 1, just after her owner, seven-year-old Thomas French, finished dinner, Poppy the springer spaniel launched herself frantically at Thomas’s father Jon — to warn him that Thomas’s blood sugar was about to crash dangerously low.

Thomas has ‘brittle’ type 1 diabetes, which means his condition is difficult to manage; there is no obvious sign to anyone when his blood sugar is getting too high or too low.

Even continuous glucose monitoring, via an implant worn on his arm, can’t keep an accurate check on his blood sugar — but Poppy can.

‘She is specially trained to pick up on Thomas’s scent and can tell when his blood sugar is dropping or spiking from his smell,’ explains Thomas’s mother Jennifer, 37, from South Ockendon in Essex. 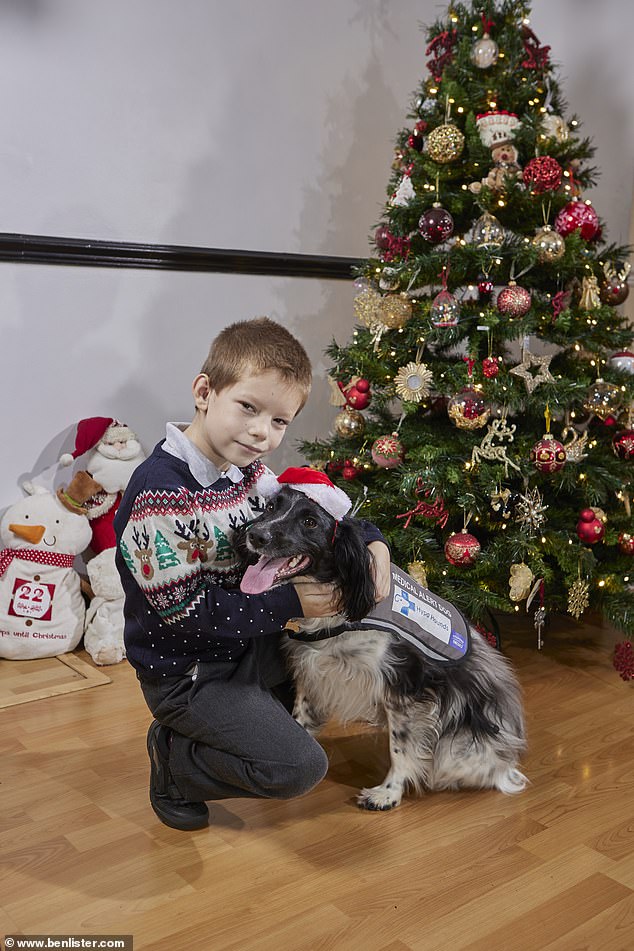 On October 1, just after her owner, seven-year-old Thomas French, finished dinner, Poppy the springer spaniel launched herself frantically at Thomas’s father Jon — to warn him that Thomas’s blood sugar was about to crash dangerously low

‘Normally, we wouldn’t check his blood sugar straight after a meal — but at Poppy’s insistence, that day we did. At first the levels looked normal but soon afterwards they plummeted. Poppy knew even before it had happened.’

Shortly after that, Thomas’s lips turned blue and he was rushed to hospital. ‘If we didn’t have Poppy, I don’t think Thomas would still be here,’ says Jennifer.

Poppy joined the family in June last year, from the charity Hypo Hounds, after several months of training on Thomas’s scent samples. She then needed ‘on-the-job’ experience for three more months.

‘Having her has changed all our lives,’ says Jennifer. ‘Before she arrived, on a bad day we would have to finger-prick test Thomas up to 26 times a day.

‘Now, we know Poppy and the incredible 300 million scent receptors in her nose will alert us if anything is amiss.

‘She and Thomas are as thick as thieves. They are both running about at a hundred miles an hour together, then lying on the sofa, snuggling up.

‘Not only does she make us all feel safe, but she’s a wonderful pet.’

Talking parrots and racing pigeons were kept by many families in previous decades — which makes Charlie the parrot and Squabbly the pigeon ideal guests at care homes in Leicestershire.

Meeting them is a novelty for residents and can jog their memories. ‘Sometimes, people who haven’t spoken for years will open up when you walk in with an animal that means something to them,’ says the birds’ owner, Sara Hibberd.

‘One gentleman had been a farmer but his carers told me he hadn’t interacted with them or other residents for years. But when we walked by with the birds — and, on that trip, some lambs — he put his hands out to us and started talking.

‘Seeing them triggered something emotional in him and had the whole home in tears,’ she says.

Charlie, an Alexandrine parrot, is a year old and not yet talking, while Squabbly was rescued from the side of a road earlier this year, when he was just a week old.

‘I took him in and now we take him to care homes, where he will sit on residents’ shoulders or hands,’ says Sara. ‘They love him — you’d be amazed how many people once had a pigeon loft. Sometimes he sits on their heads!’ 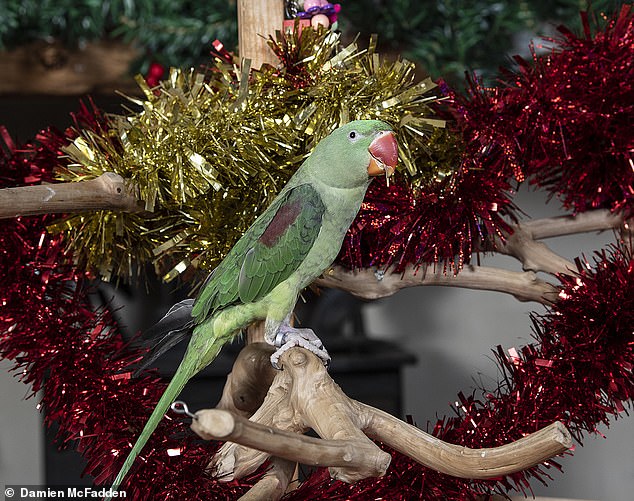