The Victorian road rule that confuses ALL other Australians – so would this catch YOU out?

The Victorian road rule that confuses ALL other Australians – so would this catch YOU out?

Anyone who has driven in Melbourne will be familiar with the road rule that baffles all Australians from outside Victoria.

The manoeuver is required at intersections that have a ‘Right Turn from Left Only’ sign, which are commonly spotted around the city’s central business district.

Drivers wishing to turn right must put their right indicator on and move across into the far left lane.

To make a hook turn, drivers must queue left and wait until the traffic light in the road they are turning into has turned green (pictured)

The cars then form a queue and wait while the vehicles in the right lane continue driving straight.

Once the traffic lights turn red, and the lights for the street they are turning into go green, the queue of cars can complete the right turn.

After they have turned, the cars in the opposite lanes of traffic then may proceed to make use of their green light.

The confusing road regulation was thrusted into the limelight last week as the state grapples with a second wave of COVID-19.

But Twitter users deplored the comment because they didn’t want to adhere to the bizarre hook turn road rule.

Hundreds rapidly began sharing the post, with non-Victorians saying they hoped the rule would not be rolled out across the country.

Many described their anxiety-provoking experiences carrying out the road rule.

‘This sign fills me with dread!’ one woman wrote.

Another added: ‘I can remember my first few days driving in the Melbourne CBD and how a hook turn still makes me nervous.’

‘I had a panic attack driving in Melbourne for the first time because of this,’ a third comment read. 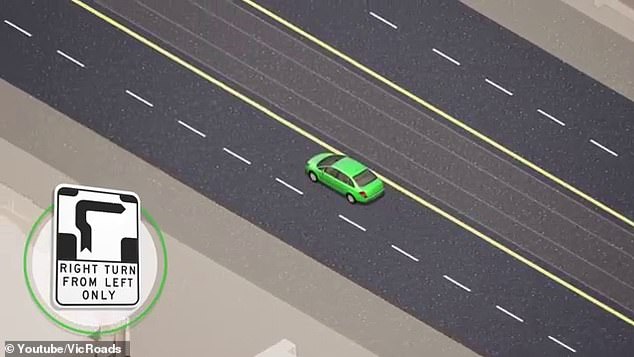 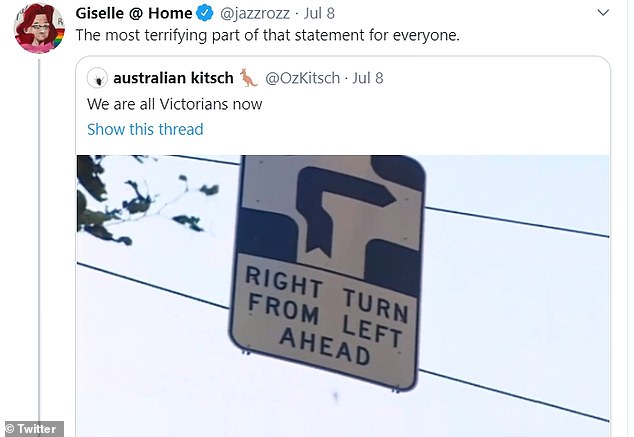 Australian TV presenter and journalist Michael Rowland said he is yet to adjust to the regulation, despite having lived in the state for 20 years

Australian TV presenter and journalist Michael Rowland said he is yet to adjust to the regulation, despite having lived in the state for 20 years.

‘Even this Victorian of 20 years standing draws the line at these. I travel blocks to avoid them!’

Hook turns were introduced to Melbourne in the 1950s to facilitate tram movement, by stopping cars from banking up over the tramlines to turn right.

The traffic regulation is also found in Adelaide, although less common, and in Beijing, and Illinois in the United States.

HOW TO DO A HOOK TURN

To do a hook turn you must follow these steps.

1. Approach and enter the intersection from the far left hand lane and have your right indicator on.

3. Stay stopped until the traffic lights on the road you are turning into have turned green.

4. Turn right into the road.