It’s a town of two halves! Welcome to the village that straddles England- Wales border… where residents will be footballing rivals tonight

Its position straddling the England-Wales border means that for Llanymynech tonight will see a game of two halves.

On the Powys side of town, landlord John Turner, 58, is expecting a bar full of Welsh fans at The Dolphin Inn. Confessing he is originally from London, he added: ‘I might be the landlord of the village’s Welsh pub but I’m still supporting England. It’s not tribal.’

At the other pub, across the A483 in Shropshire, Jason Farr expects 90 per cent of customers at the Cross Keys to support England. ‘There tends to be a bit more of a mix when it’s England v Wales in the rugby,’ he said. ‘I think some Welsh fans will perhaps stay at home.’

On the Powys side of town, landlord John Turner (pictured), 58, is expecting a bar full of Welsh fans at The Dolphin Inn

Charlotte Pryce, 34, who lives in the English half with Welshman Adam Owen, 35, said: ‘I’ll be supporting Wales just to keep the peace but if England win I’ll be secretly delighted.’

Englishman Mr Blowers, 76, met his Swansea-born wife in his home town of Shrewsbury. The couple moved to the border village to be closer to the Welsh coast, where they kept a caravan, and live on the Welsh side of Llanymynech.

Mr Blowers, an Aston Villa fan, said: ‘If England score I’ll be sitting on my hands just so I keep the peace.’

A woman working in the village café said she wouldn’t be watching the match – or indeed the rest of the World Cup – because of the host nation’s ‘homophobic’ outlook.

The village also boasts Europe’s only cross-border golf course, where members were left in a quandary when the first national lockdown eased in May 2020. 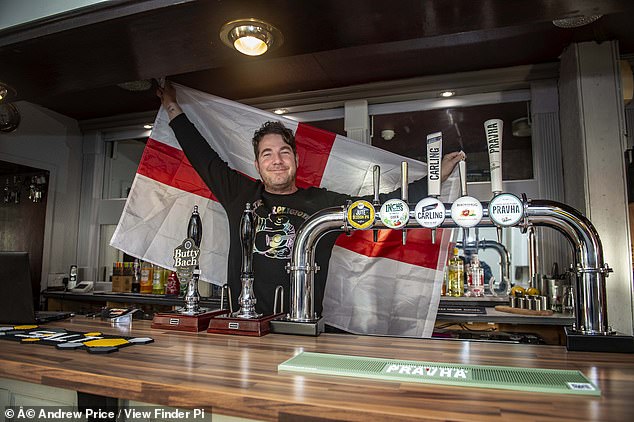 At the other pub, across the A483 in Shropshire, Jason Farr (pictured) expects 90 per cent of customers at the Cross Keys to support England

Llanymynech Golf Club has 15 of its holes in Wales, two in England and one with the tee in Wales and the hole in England. The club feared Welsh authorities could fine or arrest its members if the course reopened. But sense soon prevailed when the Welsh government announced its country’s golf courses could re-open in line with their English counterparts.