The Voice: Mariah Carey wipes away tears after being moved by MaKenzie during rehearsal in Knockouts

Former American Idol judge Mariah Carey made her first appearance on rival singing show The Voice on Monday as she mentored hopefuls in the Knockout Round.

The 48-year-old pop superstar showed none of her diva behavior and was even brought to tears during rehearsals by a Kentucky youngster’s stunning performance.

Mariah wiped tears away after being overwhelmed by 20-year-old MaKenzie Thomas and her version of How Deep Is Your Love by the Bee Gees.

Knockout round: Mariah Carey made her debut on The Voice on Monday as a special advisor to all the singers in the Knockout Round

‘You are making me cry over here,’ said Mariah during rehearsals.

‘I love MaKenzie, she is so musical, the way she was moving through the song with her voice was so powerful. I like this version of the song and I would buy it,’ said Mariah as she wiped away tears.

Jennifer Hudson then told her she could open up more during the song, and the youngster admitted she had been nervous to perform for them.

‘You feel genuine to me and that’s what I love about it,’ said Mariah. 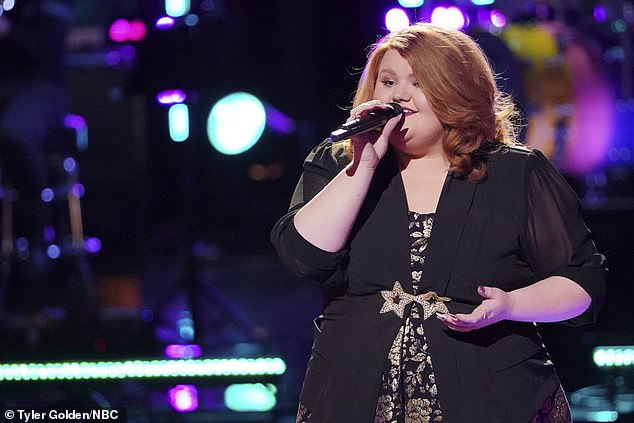 Tearful performance: MaKenzie Thomas during rehearsal made Mariah cry with her rendition of How Deep Is Your Love by the Bee Gees

‘Oh my gosh that means so much,’ said the youngster.

Mariah earlier explained why she wanted to be on the show.

‘I wanted to be an advisor on The Voice because I didn’t have shows like this with mentors and I think this is such a good opportunity for new artists, it really is,’ Mariah told the cameras. 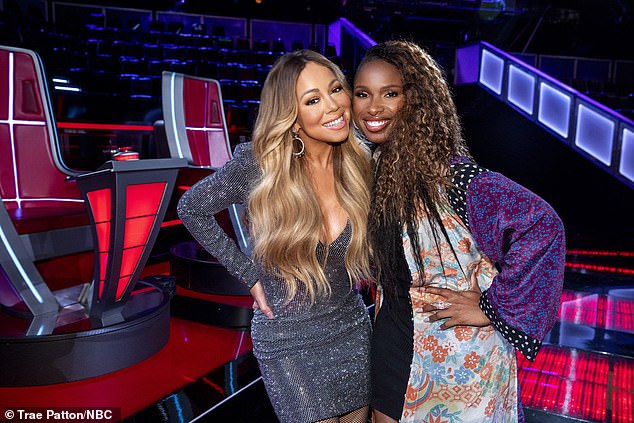 To start the show Adam Levine welcomed Mariah as she jokingly called him ‘the king’ of The Voice.

First up were Adam’s teammates Keith Paluso versus Tyke James.

Former Tennessee park ranger Keith, 30, kicked off by singing You Are The Best Thing by Ray LaMontagne. 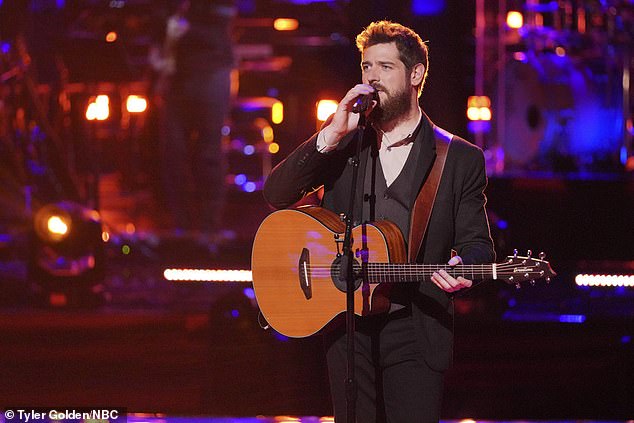 First up: Keith Paulos was the first to perform during the Knockout Round

Mariah urged him to soften his approach but to be himself.

Tyke, 17, from Hawaii, took on Ring Of Fire by Johnny Cash, which he first learned on a horse ranch in Montana.

Adam told him he needed to take things more seriously and needed better energy, and Kelly Clarkson called the youngster ‘so cute’ as he took to the stage. 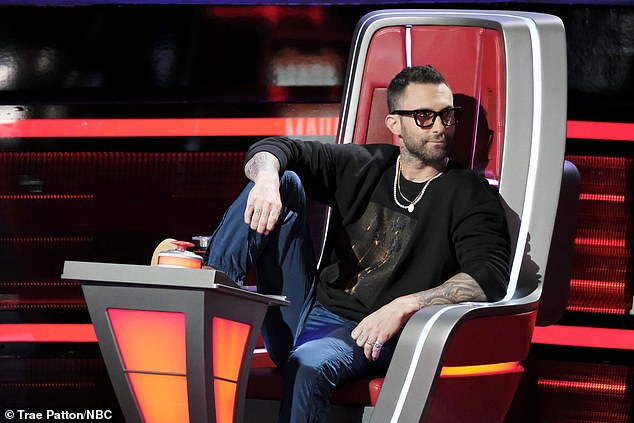 Tough call: Adam Levine was forced to pick between Keith and Tyke James

‘That was a cool version of that and felt very authentic,’ said Blake as he praised Keith’s vocal ability.

Jennifer laughed that she was ready to ‘creep on in’ after his tough choice.

Adam told Tyke his performance was ‘very infectious’ and chose him as the winner. 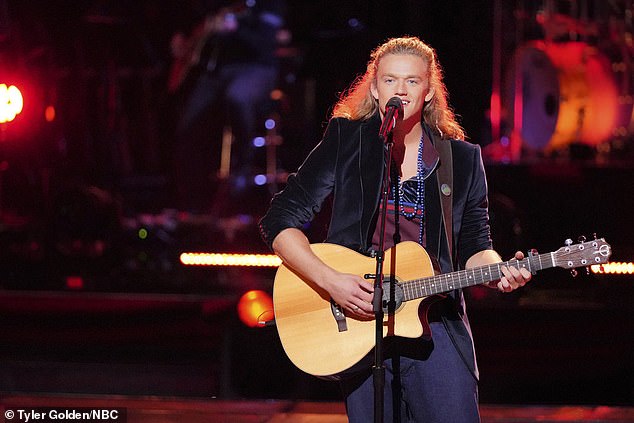 Teen talent: Tyke, 17, was named the winner by coach Adam

‘He is just a force, whatever IT is he has got it,’ said Adam as Kelly jumped in to steal Keith.

‘I have been secretly wanting him since the blinds,’ Kelly told the cameras.

Next, Mariah was called on to mentor a trio of Kelly Clarkson’s team, Kimberly Joye, Zaxai and Natasia Greycloud. They were grouped together after Cody Ray Raymond had to drop out due to personal reasons. 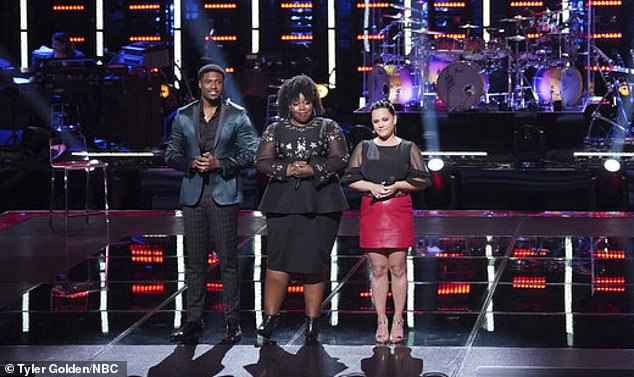 Trio grouping: Zaxai, Kymberli Joye and Natasia Greycloud were grouped together after Cody Ray Raymond dropped out due to personal reasons

The group were besides themselves when they met Mariah and screamed in delight as they met her.

Natasia sang Tennessee Whiskey by Chris Stapleton, which she sang at her sister’s wedding, and Kelly told the cameras that Jennifer would regret letting go of the ‘insane’ singer.

‘That’s a great song choice for you and it is very impressive when you are belting at the top of your register,’ said an impressed Mariah who urged her to hit a big note at the end. 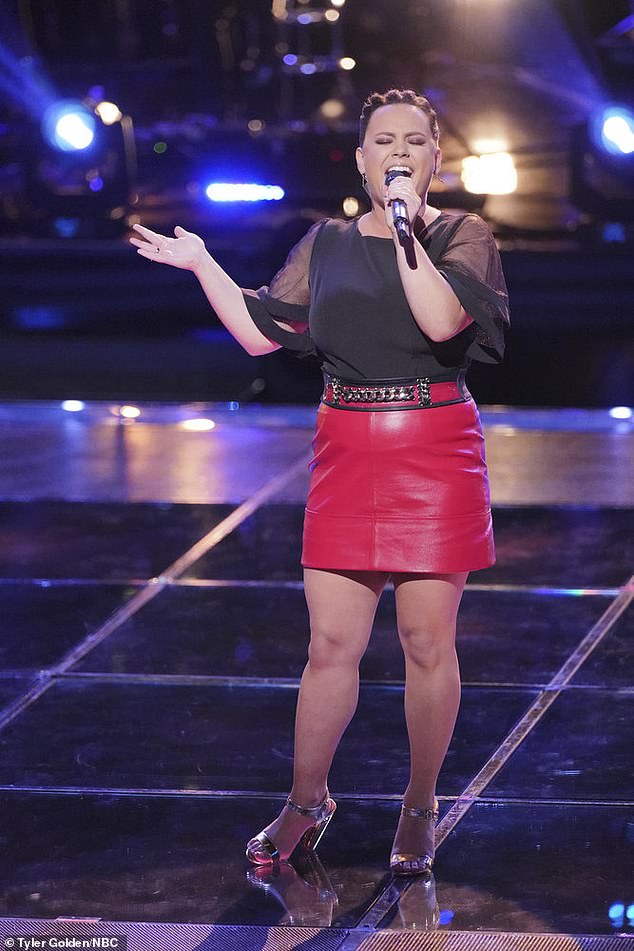 Gospel singer Kimberly, who is a background singer for Childish Gambino, took on The Middle by Zedd and Maren Morris.

‘That was incredible,’ said Mariah as she praised her for pushing her limits.

Zaxai performed Cruisin’ by Smokey Robinson and Mariah urged him to not hold back on his falsetto, before she got a Team Kelly jacket from Clarkson. 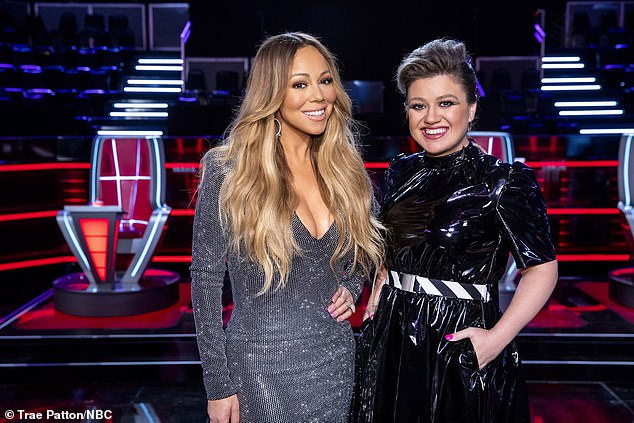 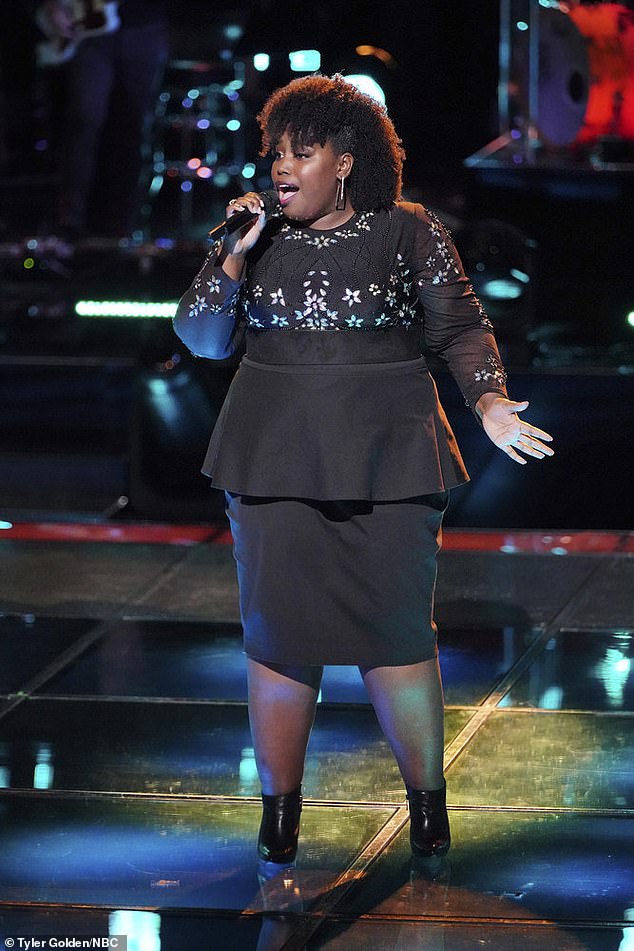 Gospel singer: Kymberli, who is a background singer for Childish Gambino, took on The Middle by Zedd and Maren Morris

‘That was some like vintage Team Kelly ‘sanging’ wow,’ said an impressed Adam after the performances.

‘Kimberly you were unbelievable, you know when Whitney [Houston] came up she came from church but she did pop, that’s what it was giving me,’ said Adam.

Jenifer complained that Kimberly and Natasia had been taken from her team and told Kimberly that ‘Whitney would be proud.’ 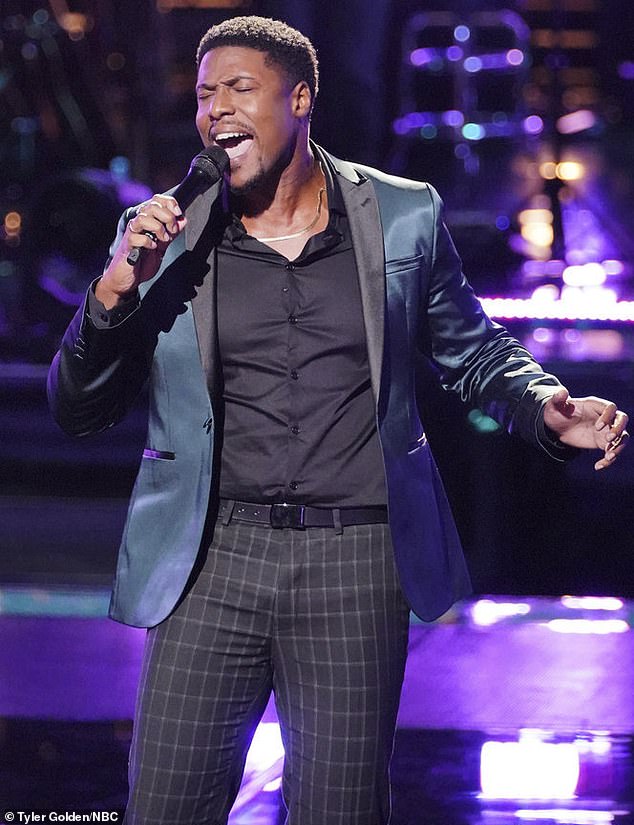 She also pointed out her notebook, which she threw across the studio while listening to Zaxai.

Kelly praised all three of the contestants but chose Kimberly as her first winner from the battle, calling her a ‘force’ and tipping her for the finale.

She then chose Zaxai as her second winner calling him her ‘dark horse’ and it took Blake just seconds to jump in and save Natasia, which earned him a huge hug from Kelly. 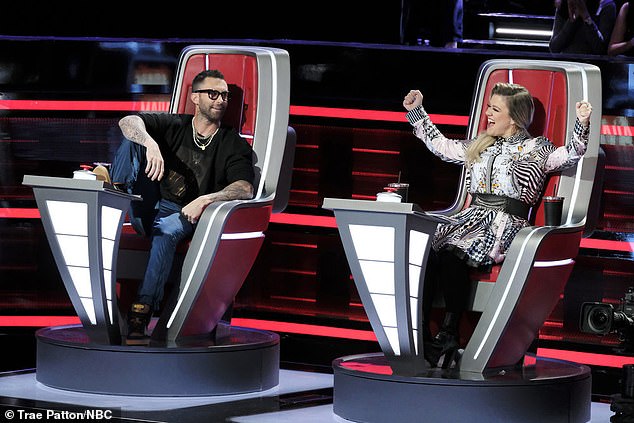 Feeling good: Kelly reacted as Kymberli, Zaxai and Natasia all stayed on the show

‘I am shocked I was able to get her she is one of the strongest vocalists in the competition,’ said Blake.

Jennifer Hudson and Mariah then traded compliments as Mariah told her she was a fan.

‘I am enjoying you,’ Mariah told Jennifer. 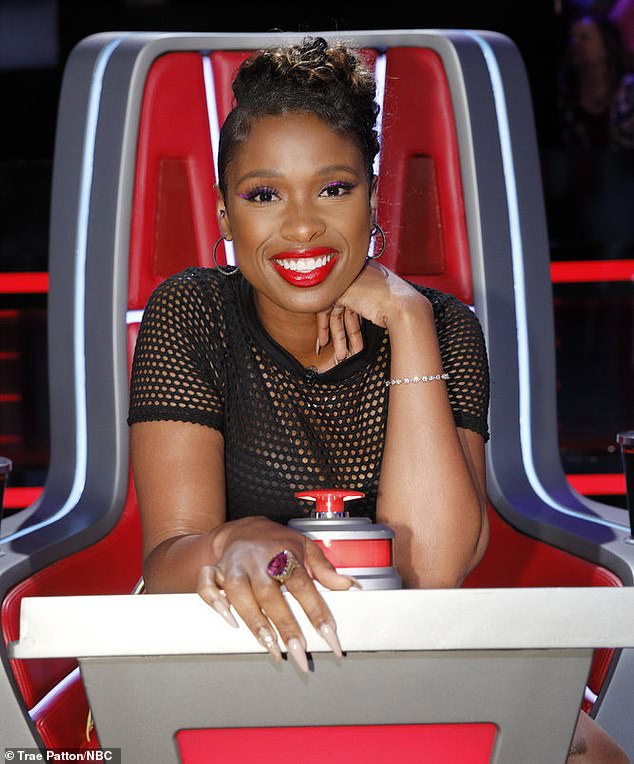 Big compliment: Jennifer and Mariah traded compliments with each other

Jennifer chose MaKenzie and Mike Parker for the knockout round.

Mike, 24, from Gainesville, Florida, took on Breakeven by The Script and told the cameras his parents had played together in a jazz band.

Mariah said she thought he had great stage presence but was displaying nerves and hoped the studio audience would help his performance. 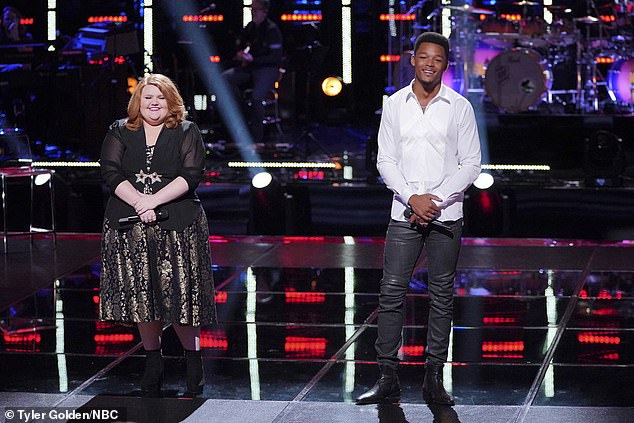 Knockout pairing: MaKenzie and Mike Parker were pitted against each other by Jennifer

‘These people about to kill me,’ said Jennifer after listening to the performances as Kelly got a leg cramp because of MaKenzie’s performance.

Adam praised Mike’s tone and told him he had come a long way, while Blake said the judges all had a ‘special spot’ for MaKenzie.

Jennifer decided to send through MaKenzie. 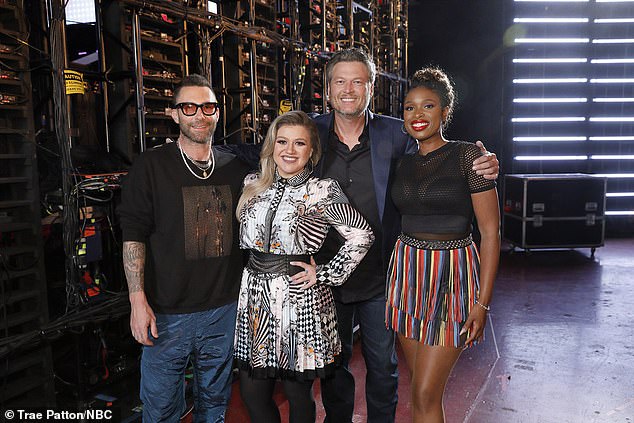 The judges: Adam, Kelly, Blake Shelton and Jennifer got together backstage

‘She made Mariah Carey cry and I want to see what more she has in store,’ explained Jennifer, but no-one saved Mike and he went home.

Radha, 19, from Jersey City, New Jersey, was left speechless when she had to sing Mariah’s hit cover of I’ll Be There by The Jackson 5. 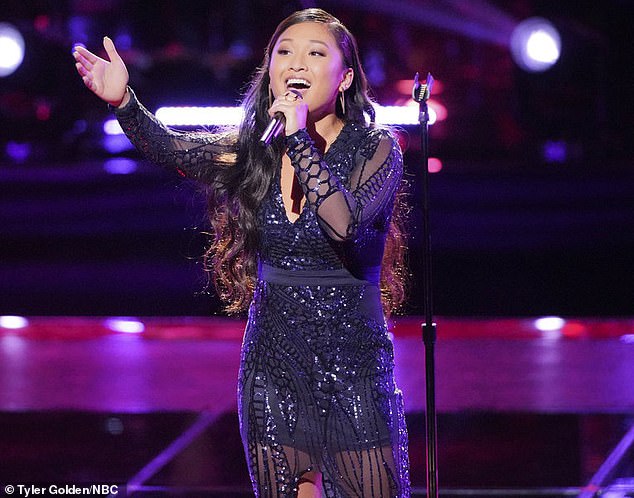 Teen talent: Radha was left speechless when she had to sing Mariah’s hit cover of I’ll Be There by The Jackson 5

‘She just needs to focus on singing it from her heart,’ Mariah told the cameras as she urged her to be original.

‘It’s unreal to get feedback from Mariah Carey and I have to make this perfect for her,’ said Radha.

Reagan, 14, from Memphis, Tennessee, took on Dancing On My Own by Calum Scott and this time it was Adam who was left emotional. 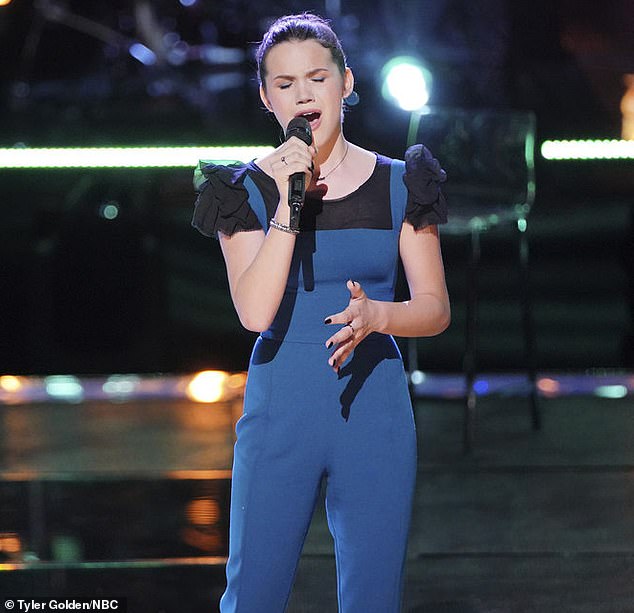 Young singer: Reagan Strange, 14, from Memphis, Tennessee, took on Dancing On My Own by Calum Scott

‘Damn, why did you have to make me cry? I have two little babies and they are going to grow up and make me cry like you,’ said Adam.

Blake told Radha that her voice reminded him of girlfriend Gwen Stefani and ‘obviously I like that a lot.’

Jennifer compared Radha to Celine Dion while telling Reagan that she had nailed her performance. 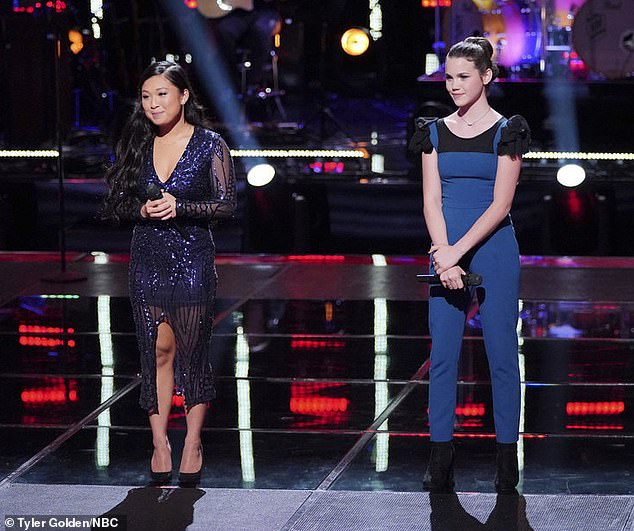 High praise: The judges heaped praise on both Radha and Reagan 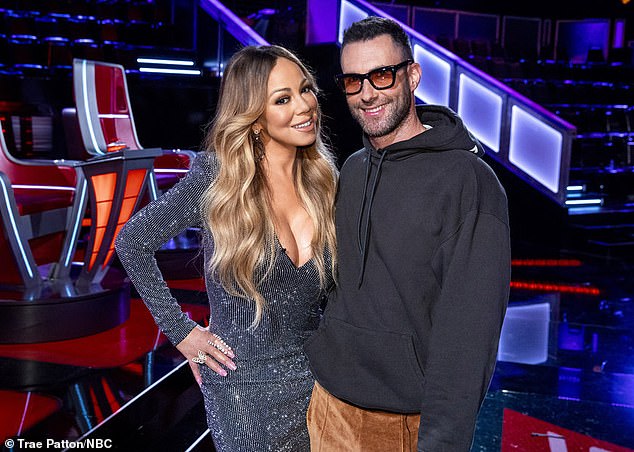 Adam told Radha she was a powerhouse and that Reagan’s song choice had been ‘gutsy.’

The Maroon 5 frontman sent through Reagan who ‘had kind of dazzled me in a way that is hard to explain’ and he instantly also saved Radha.

Blake then put Katrina Cain, 29, from Denton, Texas, and Funsho, 29, from Lagos, Nigeria, against each other. 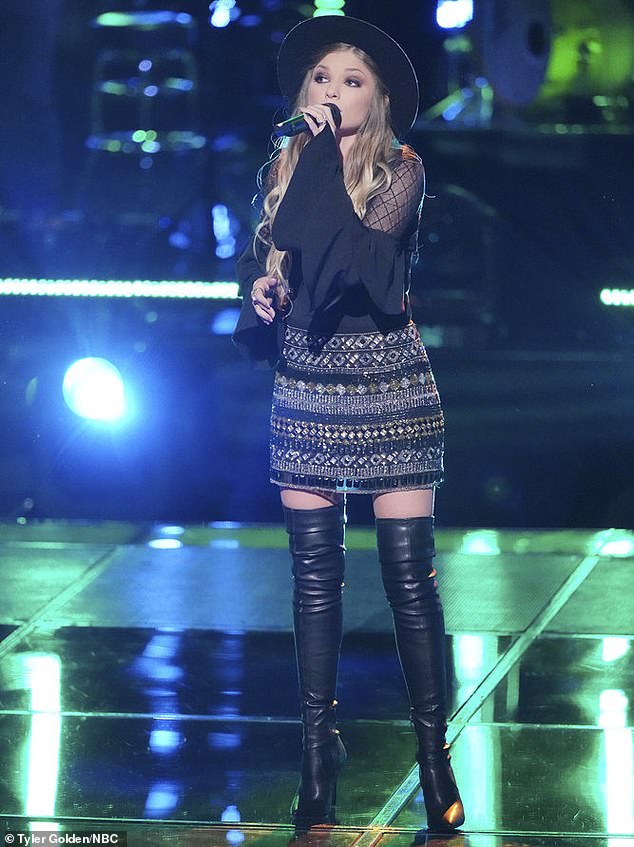 Hard choice: Katrina Cain was pitted against Funsho by Blake

Funsho took on Earned It by The Weeknd as Mariah urged him to ease into the song and let it build.

Katrina then sung Don’t Let Me Down by The Chainsmokers.

Blake said it was a tough decision and that he felt the song had ‘handcuffed’ Katrina and that he was ‘blown away’ by Funsho’s composure. 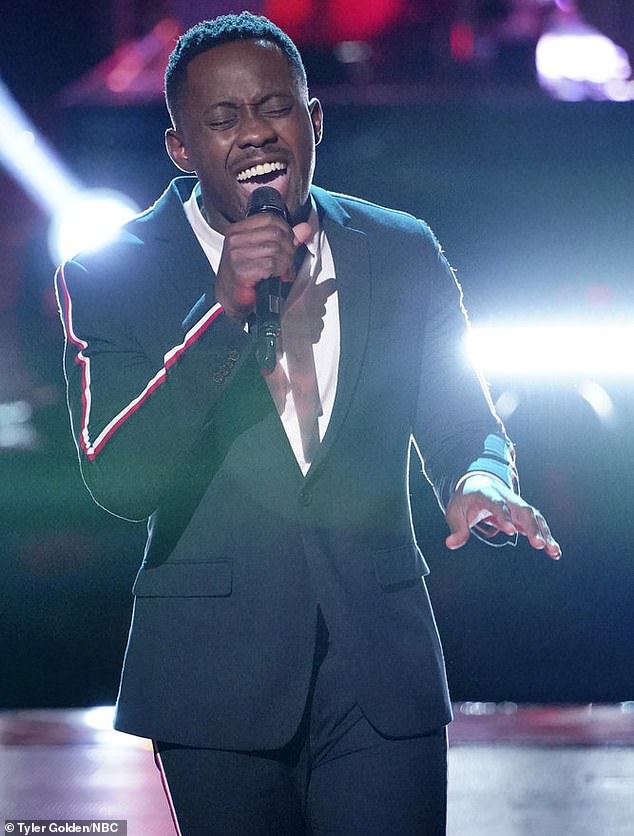 Blown away: Funsho took on Earned It by The Weeknd and impressed Blake

In the end Blake sent through Funsho saying the song had let him ‘showcase what a great vocalist he is.’

Jennifer put soulful singers Patrique Fortson and SandyRedd against each other.

Patrique, 38, from Atlanta, told the cameras he had signed a gospel recording contract at just age seven. 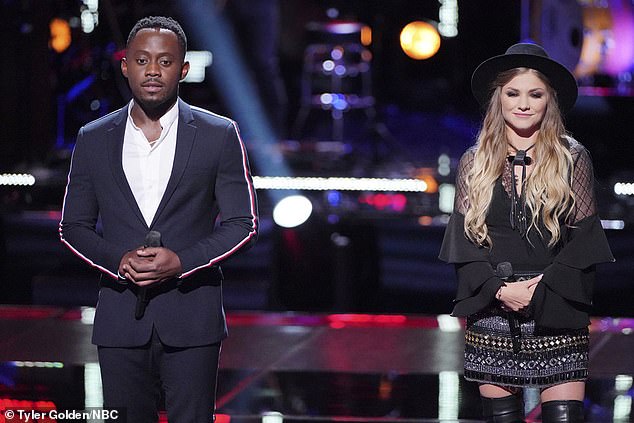 One winner: Blake declared that Funsho was the winner of the Knockout Round matchup

But he explained he fallen out of love with the business when his label collapsed.

Mariah called him a ‘singer’s singer’ as he performed I Don’t Want To Miss A Thing by Aerosmith as a tribute to his sick dad, and told him to pace his performance so that the audience could enjoy his skills.

SandyRedd, 35, from Chicago, told the cameras about getting pregnant at the age of 17 and how music had taken a backseat for her. 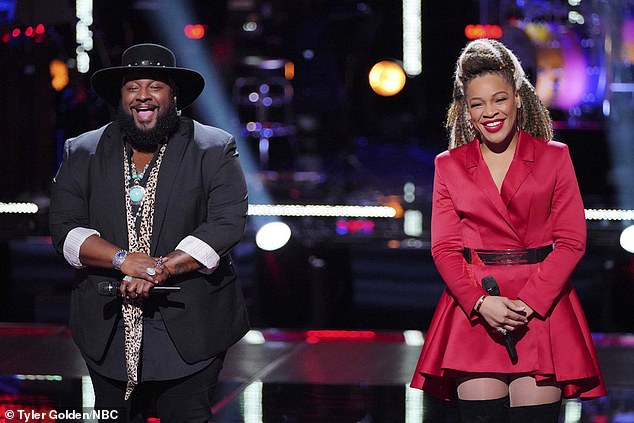 Soulful singers: Patrique Fortson and SandyRedd were paired against each other by Jennifer

She was left in tears during the rehearsal with Mariah before performing Dangerous Woman by Ariana Grande.

‘You could sing anything because of your spirit,’ said Mariah appreciatively.

Kelly called SandyRedd’s performance ‘straight up fire’ as Adam threw his shoe on stage in appreciation of the pair. 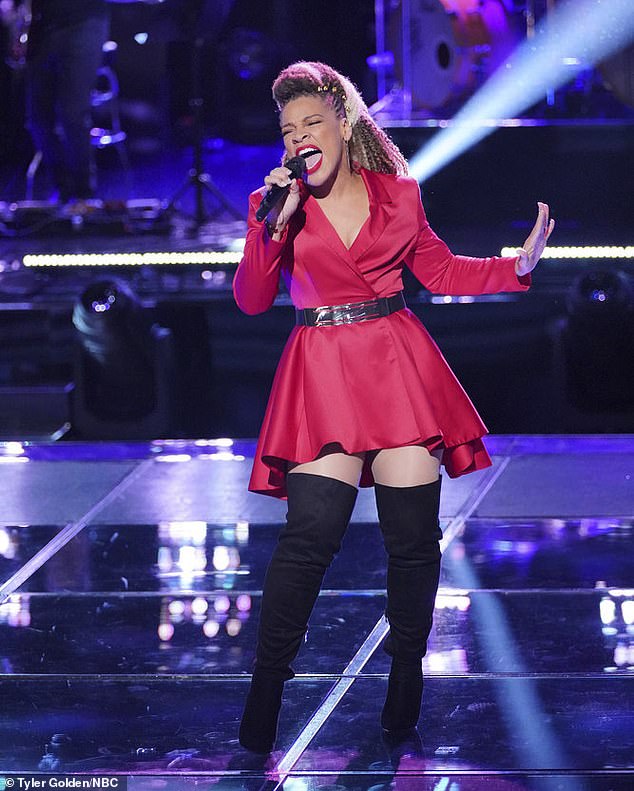 Jennifer called Patrique ‘a vocal beast’ and praised SandyRedd’s selling of the song.

In the end she chose Patrique as the winner and sent him through, with Jennifer saving SandyRedd at the final second.

The Voice will return on Tuesday on NBC as The Knockouts continue. 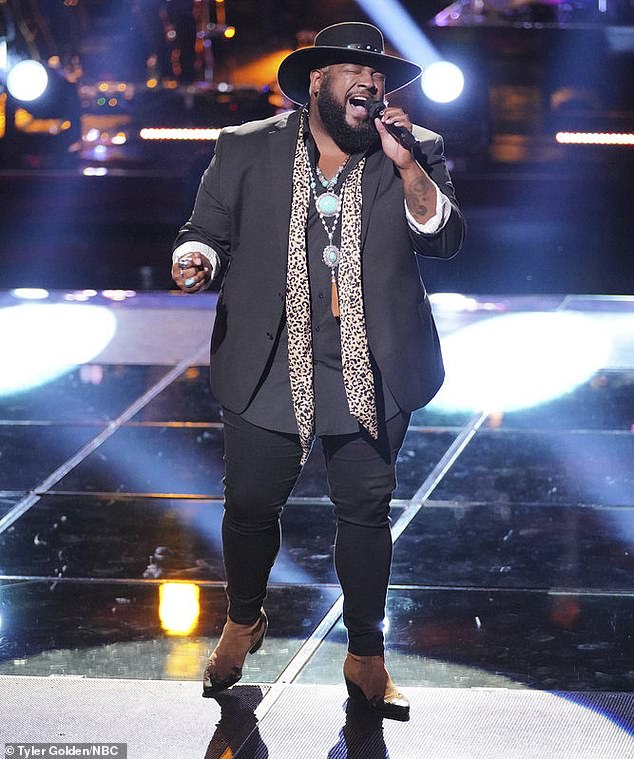 Rock song: Patrique performed I Don’t Want To Miss A Thing by Aerosmith