The wacky and wonderful castles of America

Europe is the birthplace of the castle (thank you, the Normans) – but you can get your fairytale fix in the U.S, too.

MailOnline Travel has scoured America for some of the country’s most spectacular medieval-inspired structures, complete with turrets, towers, moats, dungeons and great halls.

Over in California, Castello di Amorosa is a sublime abode inspired by a Tuscan fortress, while in New York State, Gould Castle was modelled after Ireland’s Kilkenny Castle.

At Newman’s Castle in Texas, visitors are told to keep their eyes peeled for alligators, as they like to lurk in the moat, and at Hippol Castle, near to the University of North Carolina campus, a ghost of a former pupil is said to haunt the grounds.

Many of the castles are built from stone, but some were constructed using more unusual materials, such as glass bottles, motorcycle parts and coral.

Scroll down to see some of the all-American-made structures fit for kings, queens and sword-wielding knights…

BISHOP CASTLE, PUEBLO, COLORADO: Nestled in the forested mountains of southern Colorado is this incredible structure, the labour of love of a man called Jim Bishop since 1969. In that year, at the age of 25, he began building a one-room stone cottage – but kept building. And building… 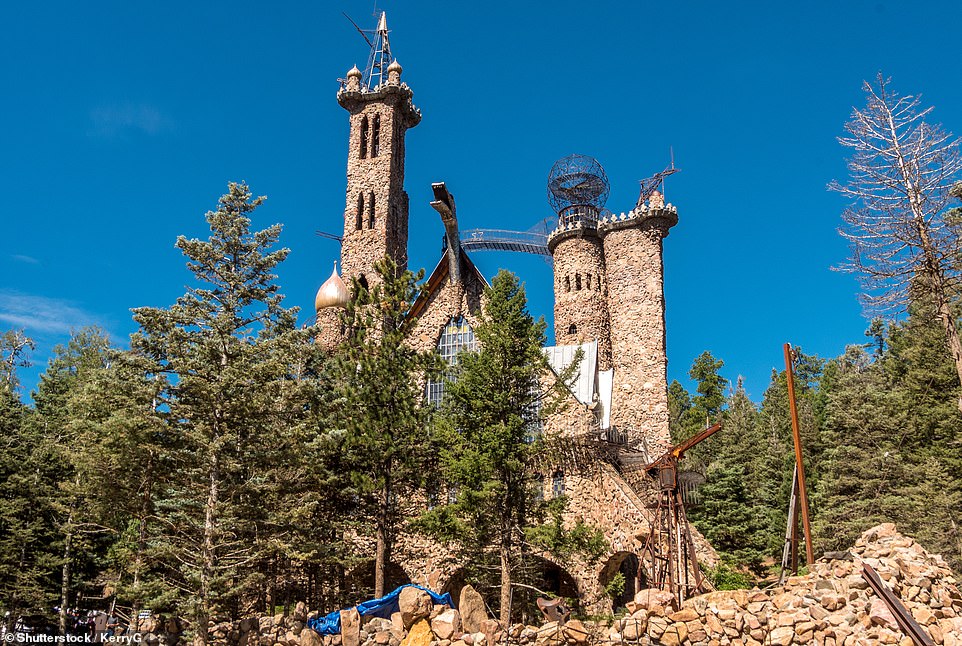 Today, Bishop’s castle-like abode includes turrets, soaring bridges, a grand ballroom and even a fire-breathing dragon constructed out of scrap metal. Entry is free and donations go towards the ongoing building project. The castle’s website says: ‘Today’s visitors to the Bishop Castle will find an impressively monumental statue in stone and iron that cries loud testament to the beauty and glory of not only Having a Dream, but Sticking with your Dream no matter what, and most importantly, that if you do believe in yourself and strive to maintain that belief, anything can happen!’ 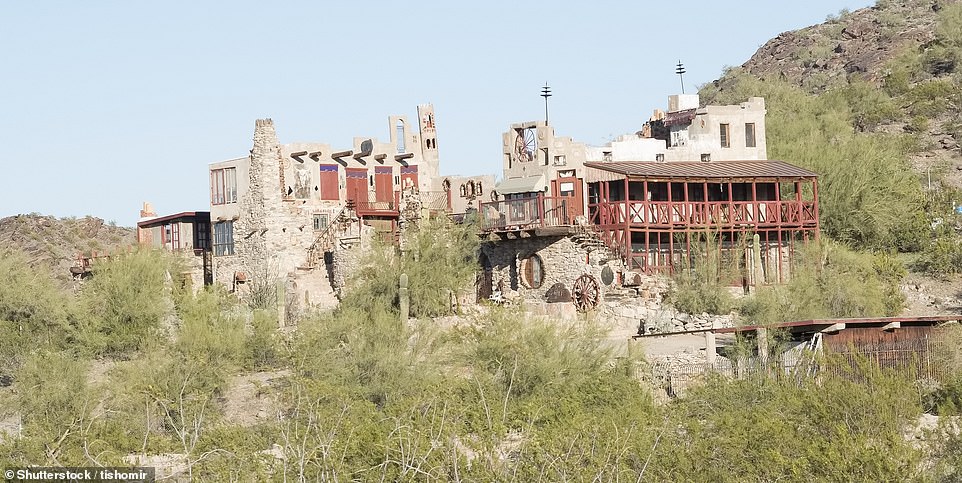 MYSTERY CASTLE, PHOENIX: Built from local stone and a range of discarded materials including old telephone poles and car parts, this castle in the foothills of South Mountain Park certainly makes an impression on the landscape. The wacky structure was built by Boyce Luther Gulley in the 1930s after he learned he had tuberculosis. He built it for his daughter, Mary Lou, and after his death, she moved into the property with her mother. Mary continued giving guided tours of her beloved home until she died in 2010. Today, the castle remains open for tours from October through May 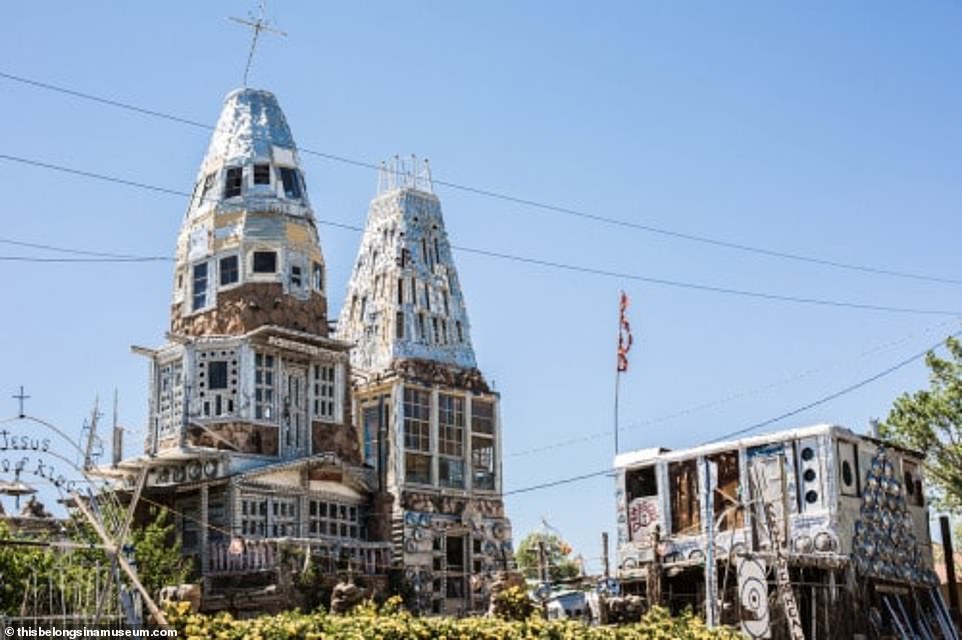 CANO’S CASTLE, COLORADO: Crafted out of beer cans and scrap metal, this spaceship-like structure in Antonito is a  real head-turner. It has been a work in progress since the 1980s, with various structures added over the years. The quirky castle is the brainchild of Donald Cano Espinoz, a Vietnam veteran who wanted to pay homage to God for surviving the war 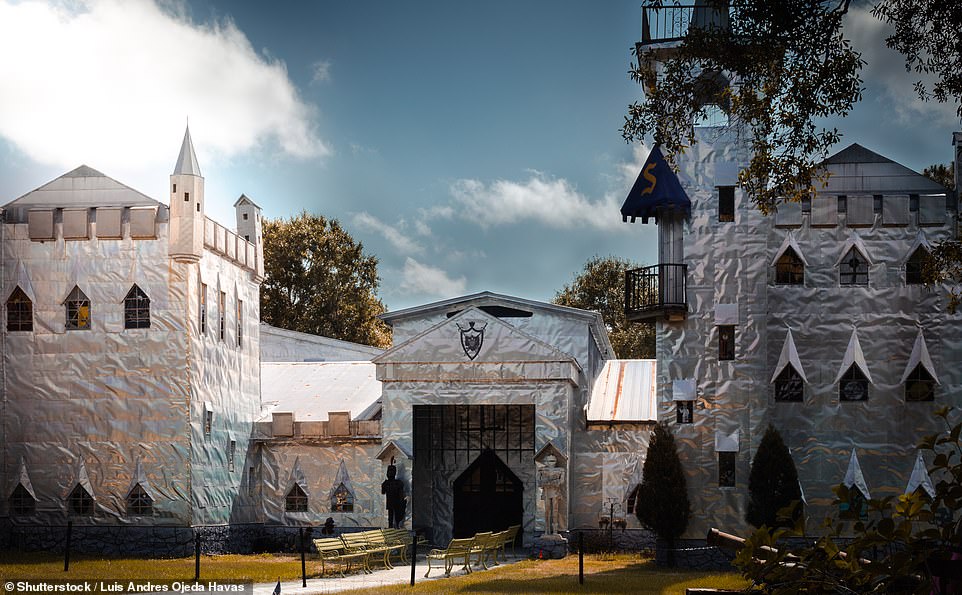 SOLOMON’S CASTLE, ONA, FLORIDA: Shimmering in the Floridian sunshine, this regal building clad in aluminium looks like something out of a fairytale. Just. It is the work of artist and sculptor Howard Solomon, who began constructing it out of discarded newspaper printing plates in 1974. He now leads tours of his unconventional home. Visitors can stop for lunch on a boat floating in the moat, with delicacies such as Queen Of Hearts Lily Lime Pie on the menu 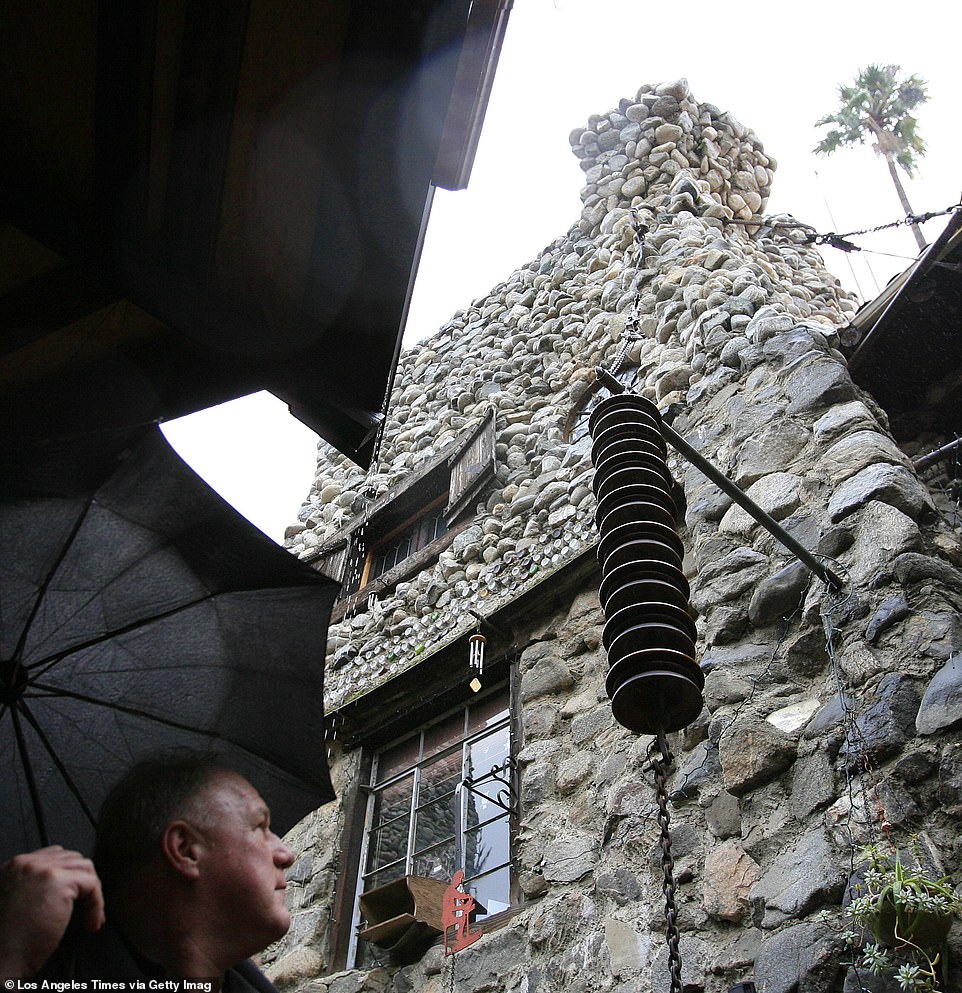 RUBEL CASTLE, GLENDORA, CALIFORNIA: Thanks to a little help from his friends, Michael Rubel realised his childhood dream of building a castle. From 1968 to 1986 hundreds of volunteers helped Rubel build his house from local river rock and salvaged materials and objects, including glass bottles, motorcycle parts and even a 1920s car. Following his death in 2007, the castle and surrounding estate were acquired by the Glendora Historical Society in a bid to protect his legacy. The property is listed in the National Register of Historic Places 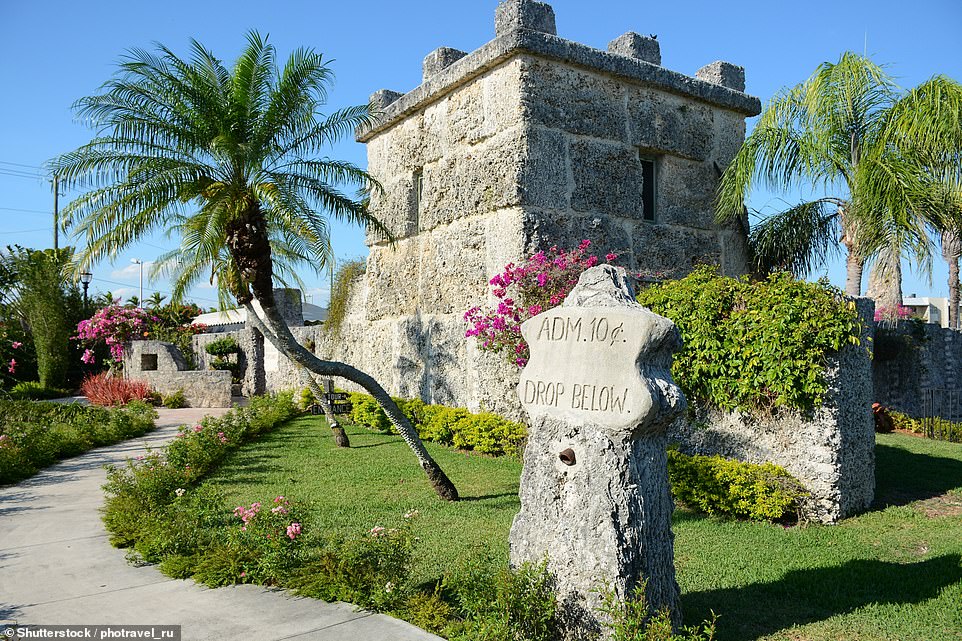 CORAL CASTLE, FLORIDA: This unusual abode really was a labour of love for the late Edward Leedskalnin. The Latvian stonemason poured his energy into building it after his wife-to-be, Agnes Scuffs, cancelled their wedding one day before the ceremony. He set out on a lifelong quest to create a monument to his lost love 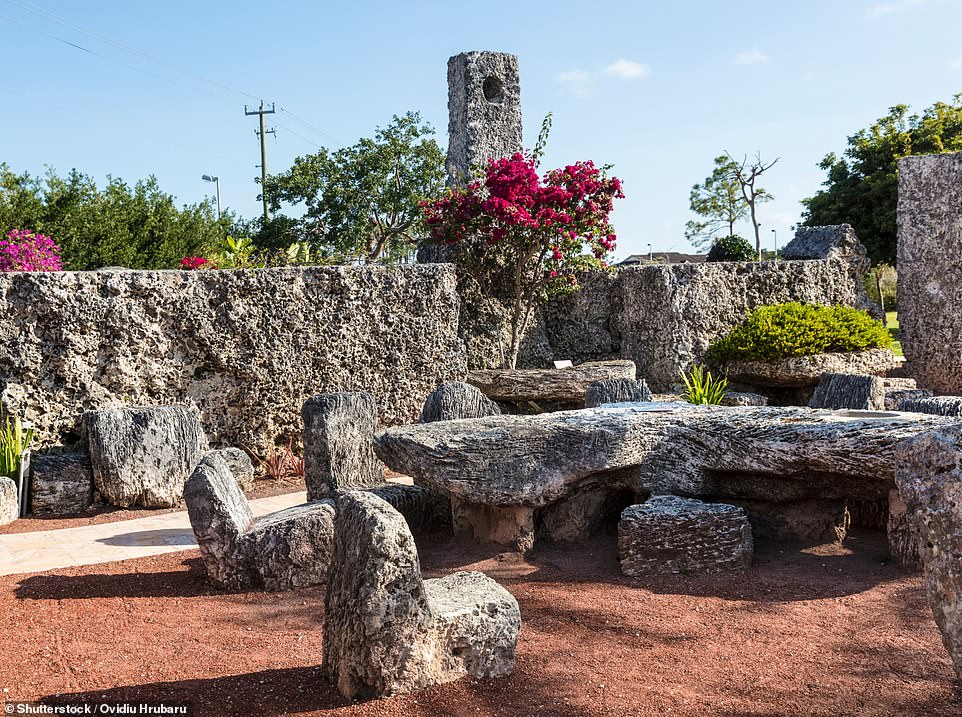 Coral Castle features very large blocks of coral and some have compared the formations to Stonehenge. The coral walls weigh 125 pounds per cubic foot. Each section of wall is eight feet tall, four feet wide, three feet thick, and weighs more than 5.8 tons. Incredibly, Edward Leedskalnin cut and moved the huge blocks using only hand tools. He never revealed how he built the castle and his secrets went with him to the grave in 1951 when he died at the age of 64 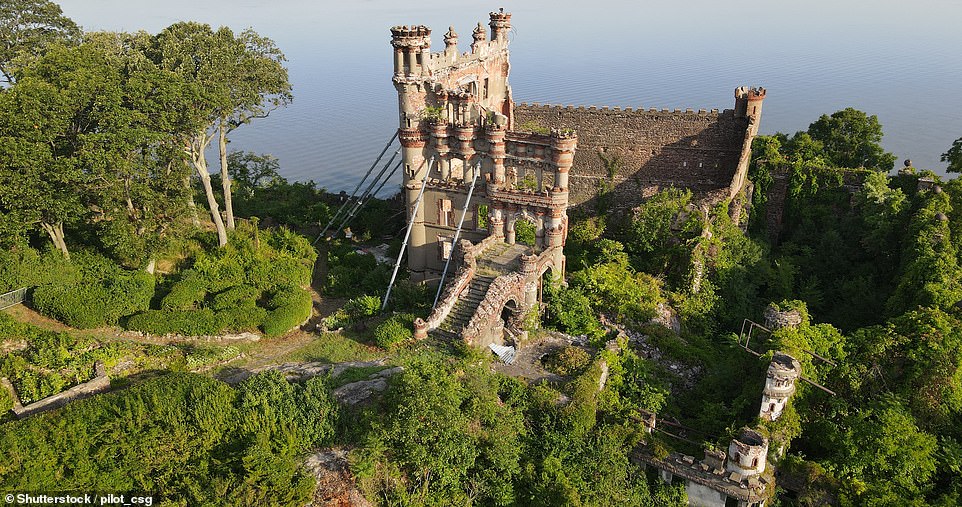 BANNERMAN’S CASTLE, NEW YORK: Modelled after a Scottish castle, this striking structure sits majestically on a small island in the Hudson River. It was the brainchild of David Bannerman, whose family originated in Scotland, and construction started in 1901. It was used as a residence and also as a storage site for the Bannerman’s military surplus business 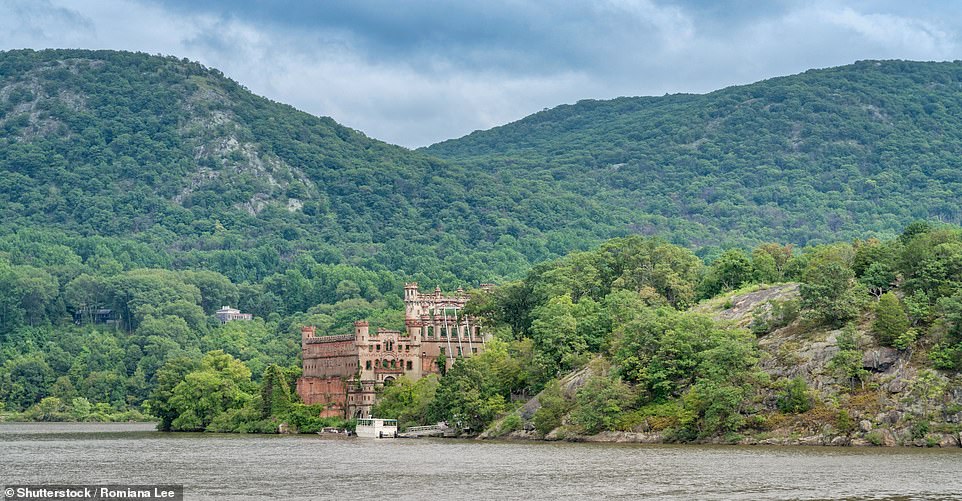 Bannerman’s Castle was deserted by the family in 1958 when the military surplus business relocated to Long Island. Pollepel Island, the outcrop it sits on, was acquired by New York State. But two years after the site was taken over on August 7, 1969, a fire broke out and much damage was caused. The castle’s charred carcass remains and the Bannerman Castle Trust continues to preserve and restore the site, with tours helping to fund the work 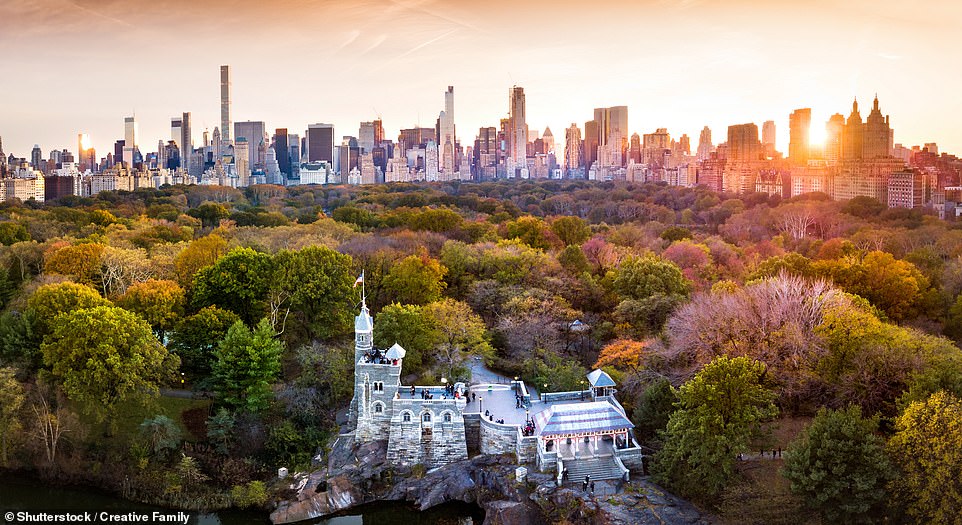 BELVEDERE CASTLE, NEW YORK: If you go down to the woods in Central Park, you’re in for a magical surprise. Situated atop Vista Rock, Belvedere Castle offers sweeping views of the park – the Great Lawn to the north and the Ramble to the south – and its surrounding cityscape 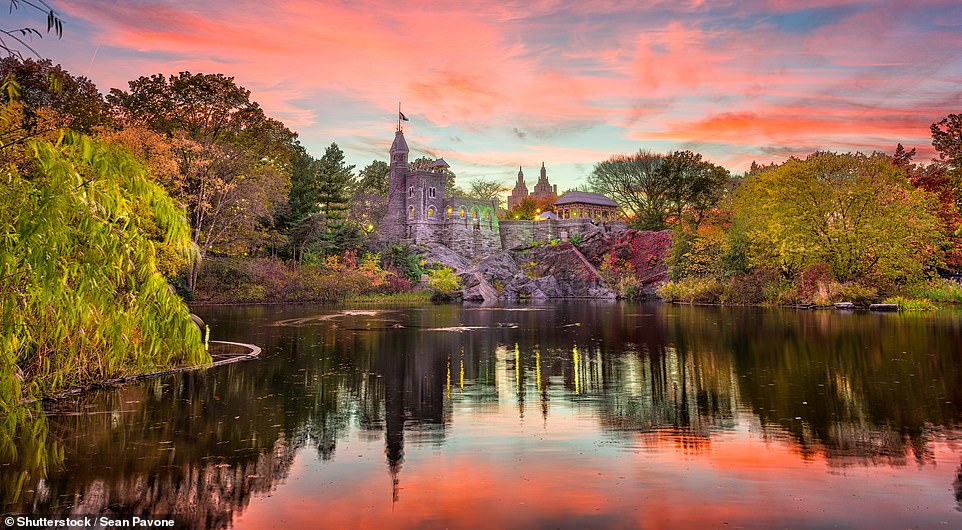 Belvedere Castle was built in 1827 as a viewing platform without windows and doors. After many years of neglect it underwent a multi-million dollar renovation and today it houses a visitor centre and gift shop. It is also home to a weather station, with New York City’s official temperature recorded around the clock 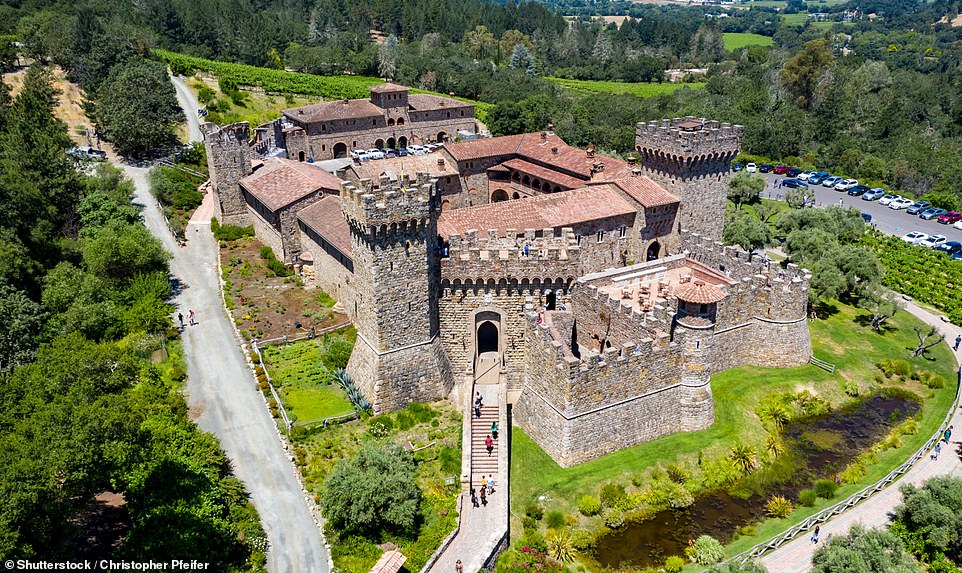 CASTELLO DI AMOROSA, CALIFORNIA: If you live in the U.S, you don’t need to fly to Italy to set your eyes upon a Tuscan castle. Castello di Amorosa in Napa Valley was modelled on a medieval fortress. It boasts 107 rooms, a moat, a drawbridge and even a dungeon 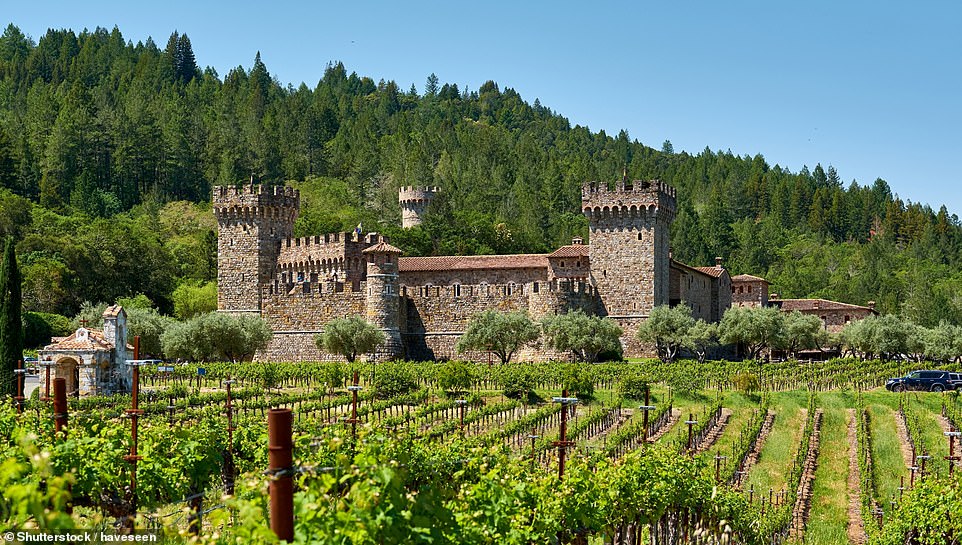 Castello di Amorosa was crafted over a 15-year period by fourth-generation Italian winemaker Dario Sattui. During the build, 8,000 tons of hand-chiselled stones were used. Today the castle is open to visitors for events and tasting sessions, with one of the highlights being the 12,000-square-foot wine barrel room 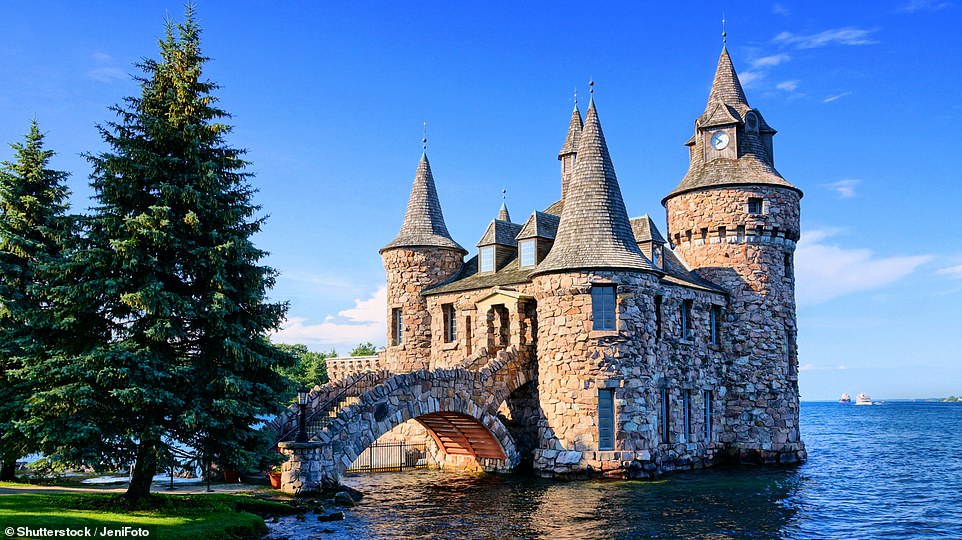 BOLDT CASTLE, NEW YORK: As a display of love for his wife Louise, George C. Boldt, millionaire proprietor of New York’s world-famous Waldorf Astoria Hotel, went about constructing a full-size Rhineland castle in Alexandria Bay at the turn of the 20th century. He employed 300 workers to build the 120-room structure on Heart Island. But in 1904 tragedy struck and Boldt’s wife suddenly died. The castle was never finished and left to ruin until it was acquired by the Thousand Islands Bridge Authority in 1977. It is now open to visitors along with the accompanying Italian gardens and Yacht House 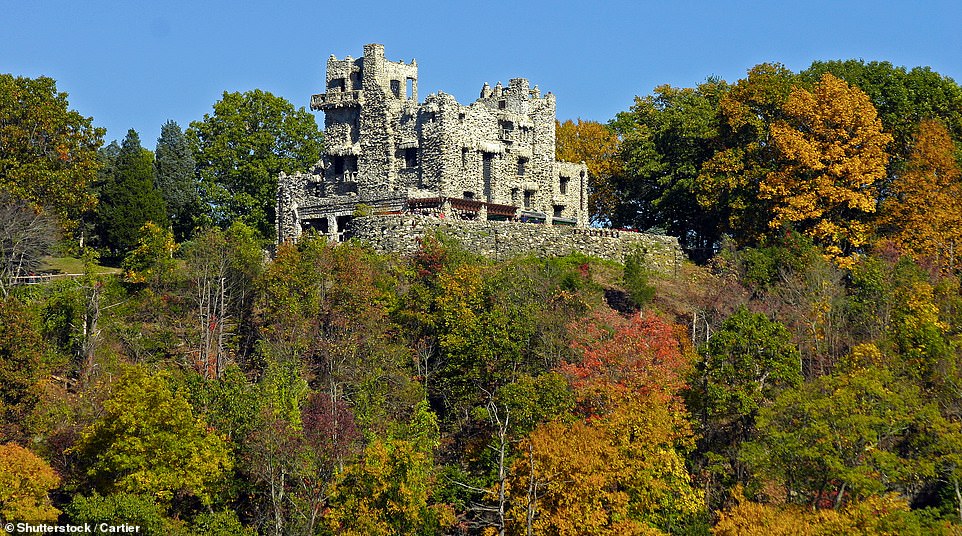 GILLETTE CASTLE, CONNECTICUT: Perched on a forested hillside in Connecticut is the architectural vision of William Gillette. The American actor, who was best known for his stage portrayal of Sherlock Holmes, wanted to craft an abode styled after a Medieval castle. He employed 20 men to build his dream home, with the main structure finished in 1919 after five years of toil 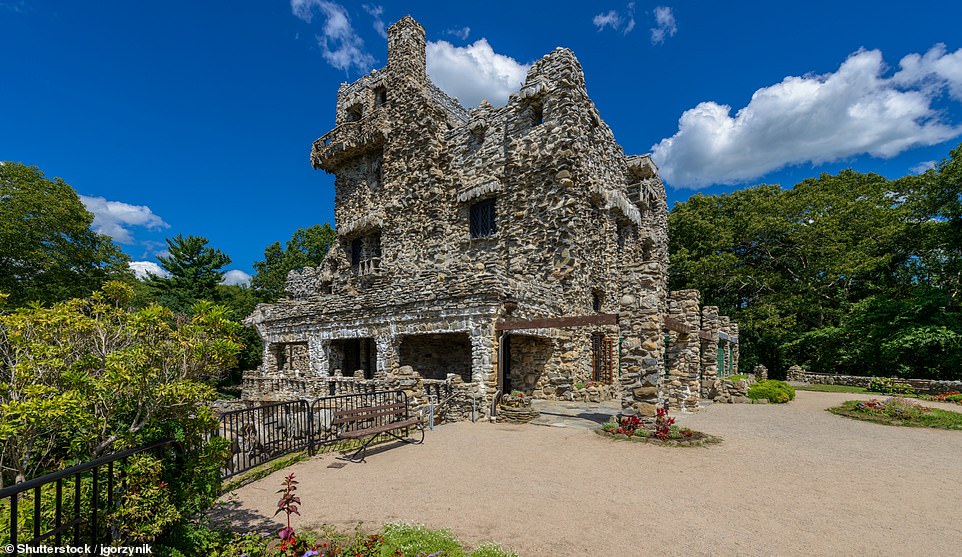 Gillette Castle might look like it is crumbling but inside, all of the 24 rooms are intact. Gillette designed all of the woodwork interiors and no two doors are the same. Other quirky features include built-in couches, a movable table on tracks, and hand-carved light switches. The State of Connecticut purchased the castle and surrounding estate in 1943 following Gillette’s death, and the property is now open for the enjoyment of visitors 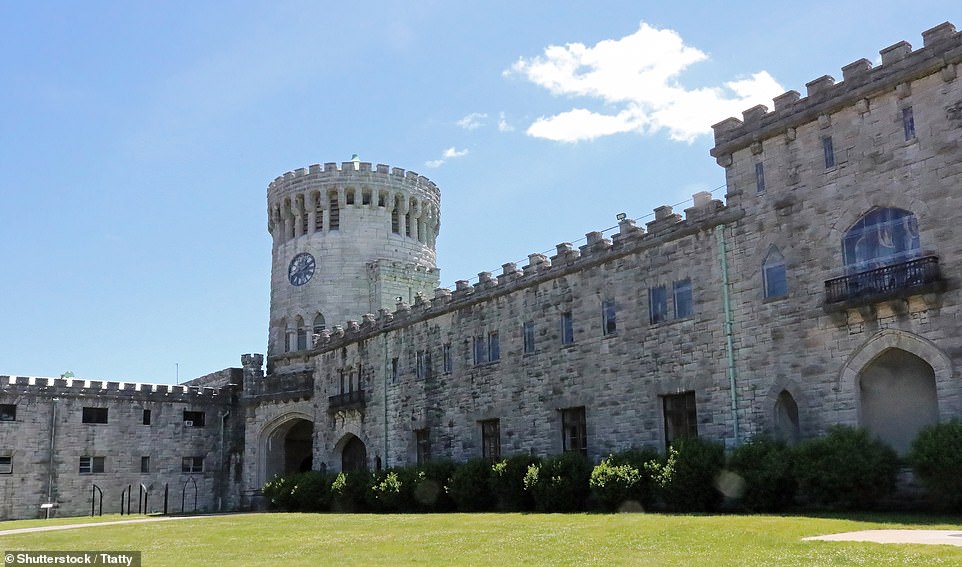 CASTLE GOULD, SANDS POINT, NEW YORK: Get a dose of Irish charm with a visit to this New York landmark, modelled after Ireland’s Kilkenny Castle. The impressive limestone building was commissioned in 1902 by financier Howard Gould and took two years to complete. It was intended to be Gould’s primary residence but when his actress wife Katherine Clemmons said it didn’t suit her he went about building a neighbouring mansion. Today the castle houses a visitor center and events space 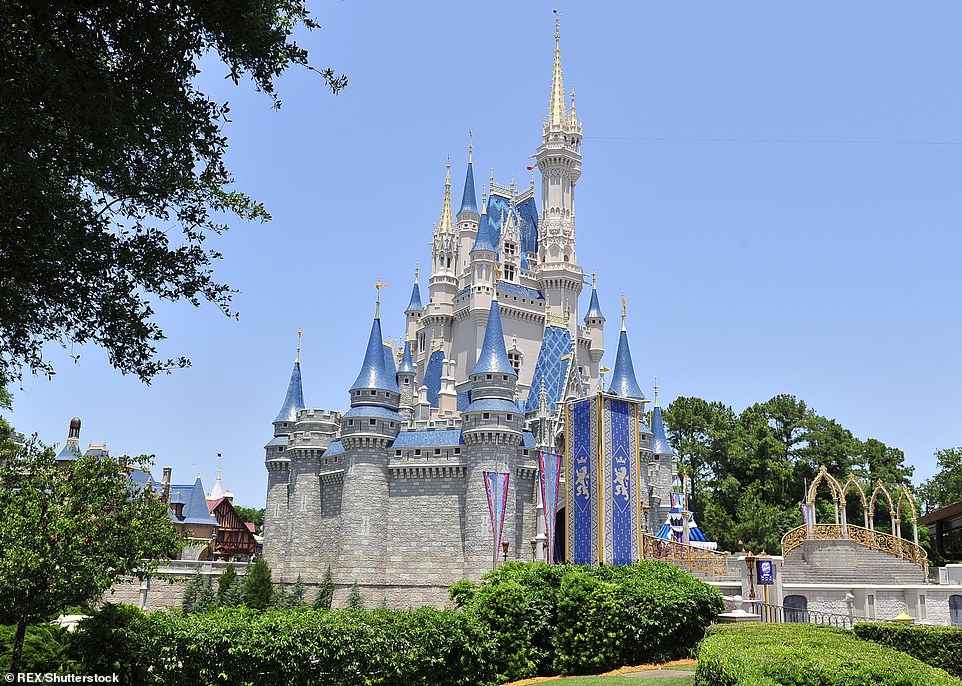 CINDERELLA CASTLE, FLORIDA: Play at being a prince or princess with a visit to the famed Cinderella Castle in Florida’s Walt Disney World Resort. The 189-foot landmark was completed in 1971, after about 18 months of construction. It includes lofty spires, ornate turrets, a moat and handcrafted glass mosaics that tell the story of Cinderella’s rise from orphan to a princess 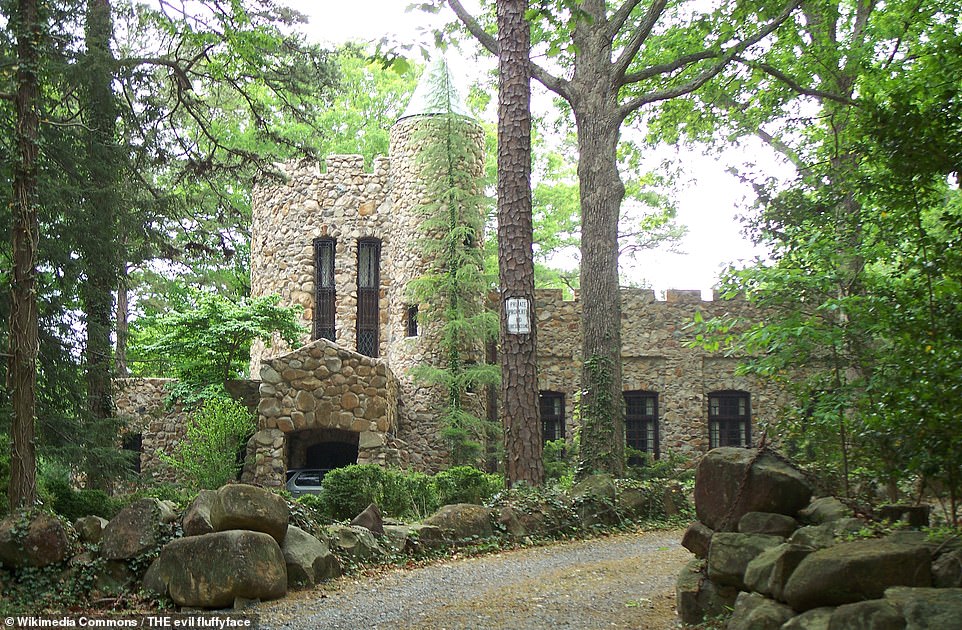 HIPPOL CASTLE, NORTH CAROLINA: Near the University of North Carolina campus there is a castle shrouded in mystery. It was built in 1924 as a meeting place for a secret student society called the Order of Gimghoul. The castle cost almost $50,000 to construct with members pooling their money and French artisans hired to cut the stone cladding. The secret society is still active, with membership by invitation only. The castle is on private property and not accessible to the public. Legend says the site is haunted by a former pupil who died while fighting a fellow student for the affections of a young woman 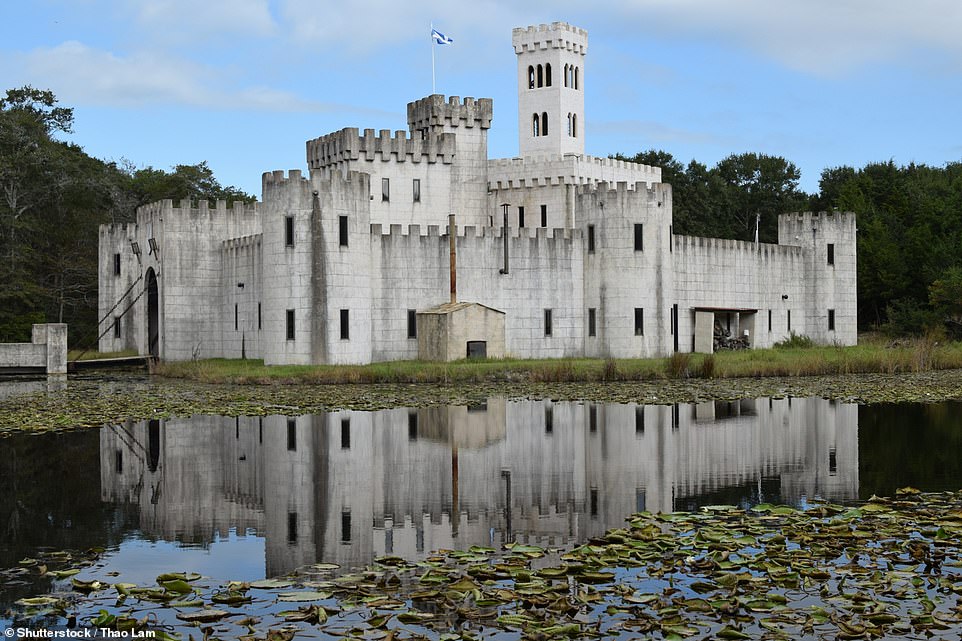 NEWMAN’S CASTLE, BELLVILLE, TEXAS: Visitors are told to keep their eyes peeled for alligators at this castle, as they like to lurk in the moat. The turreted creation was designed by local baker Mike Newman, who wanted something a little grander than the average home. He opened the castle in 2006, with highlights including a 3,000-pound drawbridge with accompanying portcullis, a chapel, five round corner turrets, a courtyard, and a central keep. Tours include baked goods from Newman’s Bakery