The ending of episode five saw socialite and heiress Tanya wake up in the middle of the night and take a walk around a majestic villa in Palermo, Italy, which she had been invited to stay in by her new friend, Quentin, played by Tom Hollander.

However, Tanya was left stunned when she stumbled upon Quentin having sex with his ‘nephew’ Jack in the final seconds of the episode.

Oh my god: Jennifer Coolidge’s character stumbles on a seemingly illicit tryst at the end of the fifth episode of The White Lotus season two

Viewers were just as surprised as the character with many immediately flocking to social media to share their shocked reactions, and musing about what this could mean for the plot going forward.

One fan stated: ”So he’s f**king on his uncle? Is that really his nephew? What’s going on here?’

‘Screaming at that episode ending! Jaw is on the floor,’ another wrote, while one fan added: ‘THE ENDING WAS SO UNEXPECTED?!??!?’

One Twitter user stated: ‘The “uncle” and his “nephew”? I want to claw my eyes out, and I want the rest of the season NOW!” 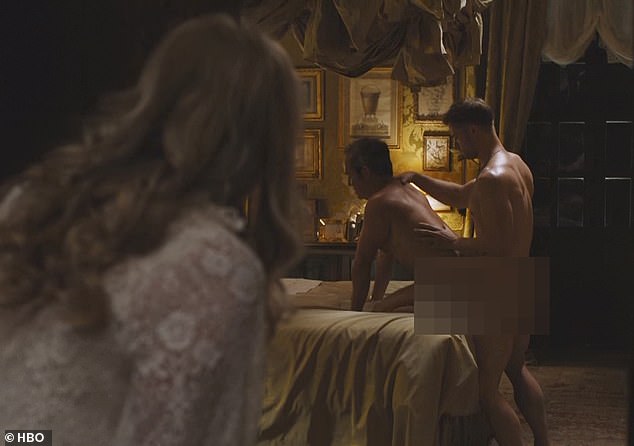 Didn’t see that coming: Her character woke up in the middle of the night to finds Jack, played by Leo Woodall, having sex with his uncle Quentin, portrayed by Tom Hollander 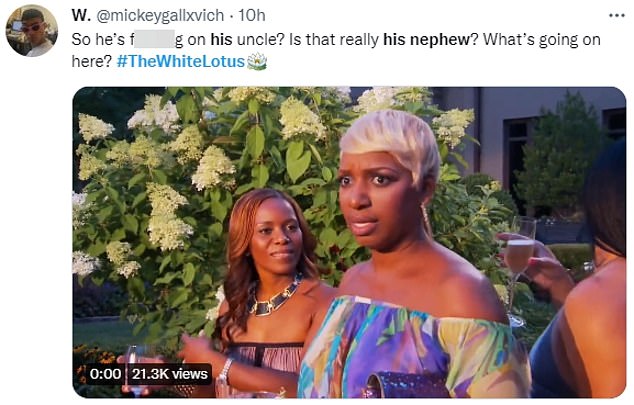 ‘Well that ending I wasn’t expecting…’ one tweeted, while another mused: ‘Something tells me he might not be his nephew…’

Indeed, many began to ponder about what situation Tanya had managed to get herself into as one mused: ‘I don’t think that’s his nephew. Bet they’re trying to run a scam on poor Tanya. The way they slightly shaded her at the Opera was a clue.’

‘So…either that man is having sex with his nephew, or that’s not his nephew and this is all some elaborate ruse of some kind…,’ another commented.

One person wrote: ‘Don’t be confused, Jack’s not really his nephew, it’s his boyfriend. Jack’s working Portia to keep her away so she won’t catch on to their scam.’

Another mused: ‘Jack is not the nephew of Quentin but his lover and is tasked to keep Portia busy as part of their plan to kill Tanya. He couldn’t “forgot his wallet” ‘cause he doesn’t have money, his arsenal is just his d**k in this whole plot.’ 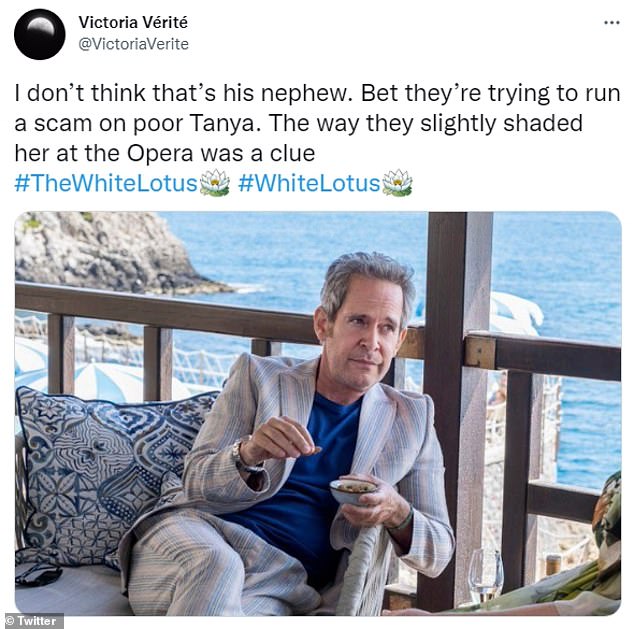 Untrustworthy: Many viewers shared their theories about the characters and their true intentions in the show

Speaking about the surprising scene to E! News, Hollander explained: ‘Tanya witnessing it, it’s delicious and it makes you realize that [creator Mike White] really has got a plan and the writer really is going somewhere. He hasn’t lost his way with this story. It’s very, very confident.’

Hollander also noted that the scene was somewhat similar to the first season of The White Lotus, where Murray Bartlett and Lukas Gage’s character were caught in a sexual act.

The actor said: ‘ In a way, it was “Ah, there it is! There’s that scene!”. That unforgettable moment where someone pulls back a curtain and you see something that is intensely private that is not supposed to be watched by everyone else.’ 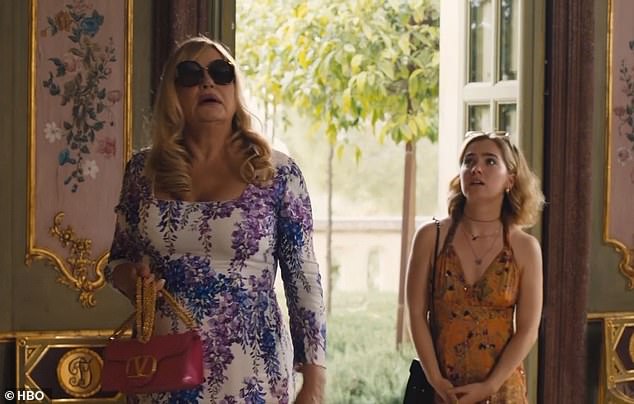 Leo Woodall revealed his reaction about the scene in an interview with Variety as he explained: ‘When I found out about the scene, I was speechless for a while. I’m such a huge fan of Tom’s, and when I heard that he was going to be playing my uncle, I thought, “That is unreal.”

‘And then when I found out that I was going to shag him as well — that was kind of surreal. Anything that Mike White does with this show is kind of perfect, so there were no reservations about it. It felt like an incredibly “wow” moment.’

Meanwhile, writer White opened up about his decision to include such scenes in the drama series as he explained: ‘There’s a pleasure to me as a guy who is gay-ish to make gay sex transgressive again.

‘It’s dirty… men are having sex and you have this “Psycho” music underneath. It just amuses me.’ 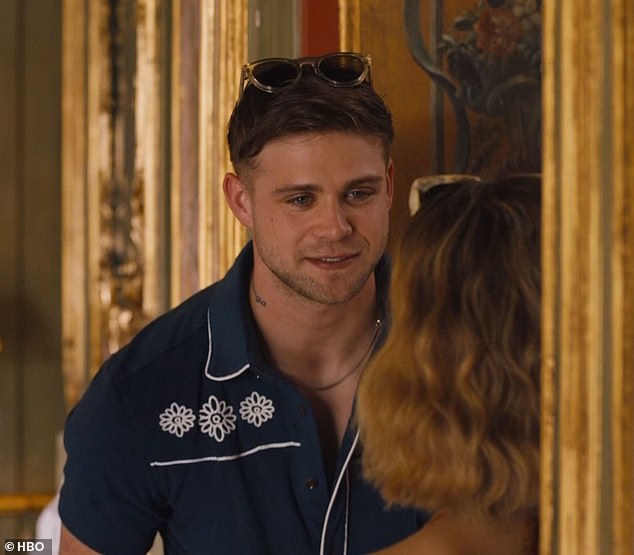 Playing a game: Jack had previously been sleeping with Portia before stepping away to do a favor for his ‘uncle’ 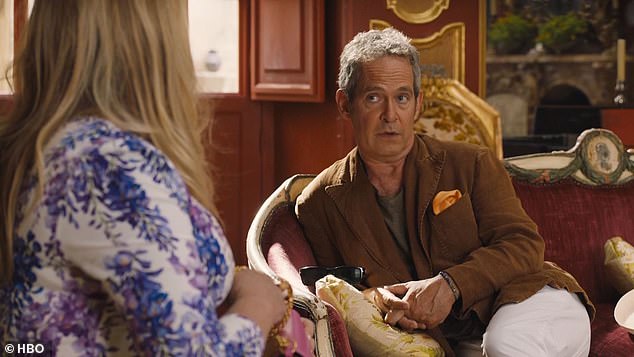 Bad intentions:  Fans now believe the duo are lovers who plan to scam Tanya out of her money

He continued: ‘I just think transgressive sex is sexier. I guess I’m old school. There’s this Gothic vibe of walking through a haunted hotel or haunted house and people are having sex behind closed doors.’

As for whether Quentin and Jack are actually related, White teased, ‘Well, you’ll have to see.’

The season season of the hit HBO series is set in another White Lotus resort in Sicily.

The preview for next week’s penultimate season two episode – Abductions – teases  a moment in which Tanya tries to warn Portia – played by Haley Lu Richardson – about continuing a relationship with Jack.