The Wife review: Glenn Close edges towards an Oscar

Glenn Close is now 71 and, when you think of her best work, there’s no doubt you quickly find yourself going a long way back. Fatal Attraction – the iconic Eighties sex thriller that turned her into a household name but made her very unpopular with rabbits – is more than 30 years old now, while Dangerous Liaisons – in which she played another sexually scheming temptress – is only a year younger.

Of course, over the years she’s subsequently made some very decent films – The Paper, Air Force One and Cookie’s Fortune – and enjoyed commercial success with 101 Dalmatians.

But ever since her last award hope, Albert Nobbs, failed to turn a sixth and somewhat fortuitous nomination into what would have been her first actual Oscar, there’s been a sad feeling that, as far as the big screen was concerned, her best years were behind her. 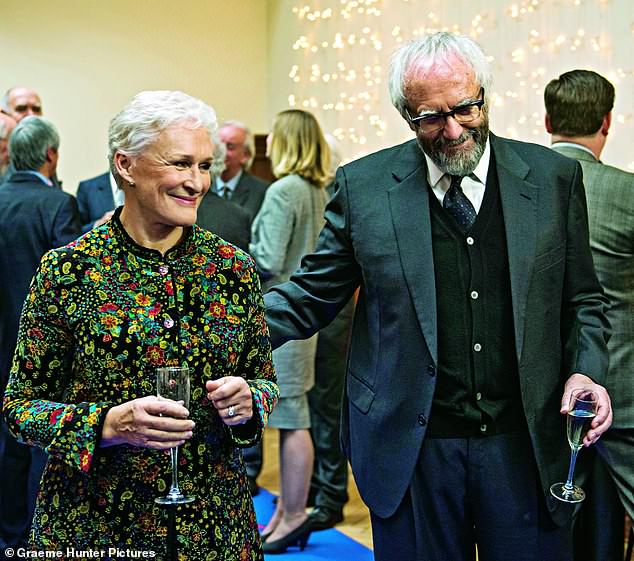 The films starts with a long-married senior couple, the Castlemans, in bed together but unable to sleep. Above: Glenn Close and Jonathan Pryce as Joe and Joan Castleman

Well, wrong, wrong, wrong. In The Wife, Close gives a performance of such devastating delicacy you can’t take your eyes off her. And she deserves every nomination and accolade coming her way.

Based on the 2003 novel by the American author Meg Wolitzer, this audience-pleasing adaptation gets off to the most wonderful start, with a long-married senior couple, the Castlemans, in bed together but unable to sleep.

Which is not surprising when we discover that he, Joe Castleman – superbly played by Jonathan Pryce – is a giant of the literary world nervously awaiting the early morning phone call that will signal he’s won the 1992 Nobel Prize for Literature.

When milky drinks and small-hours chat don’t work, he finally suggests a little nocturnal nookie, a suggestion that Joan (Close) good-naturedly goes along with. When the phone finally rings in the morning and they bounce on the bed together – ‘We won the Nobel Prize, we won the Novel Prize…’ – it confirms our impression that the Castlemans are the happiest and most enduring of creative couples. Ah, but what sort of film would that be? 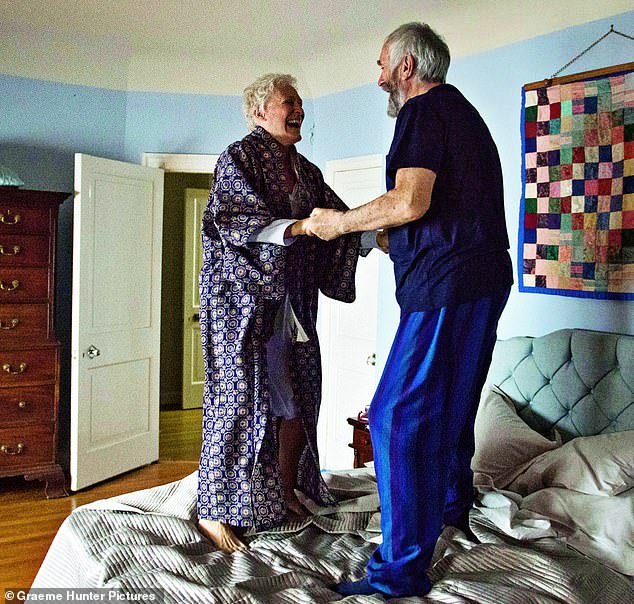 When they bounce on the bed together – ‘We won the Nobel Prize, we won the Novel Prize…’ – it confirms our impression that the Castlemans are the happiest of creative couples

The first cracks appear at a hastily arranged family celebration, when Joe can’t find a kind word of encouragement for his adult son (Max Irons), who has aspirations to be a writer himself and longs for his father’s approbation. But approbation comes there none, as we realise that when it comes to the vainglorious Joe, it’s all about me, me, me.

But he does find time to publicly thank his wife Joan, the ‘love of my life… without this woman I am nothing’, a sentiment so commonplace it would be its absence that we would notice, not it’s totally unremarkable presence. Unremarkable, of course, unless he really would be nothing without her.

Gaining an extra star for featuring Concorde (I jest, but goodness don’t we miss it), the action swiftly moves to Stockholm and the extraordinary preparations for the prize ceremony itself.

Now, with so many apparently informed glimpses behind the Nobel scenes, it becomes apparent why the Swedish film-maker Björn Runge was brought in to direct. 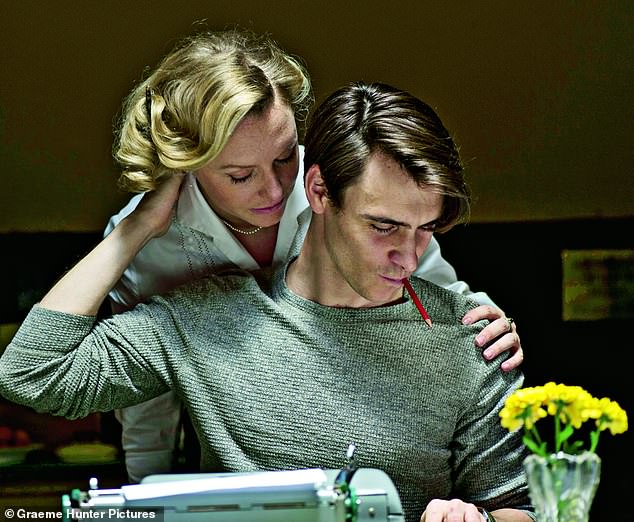 Distant past blends with present, as flashback starts the fascinating progress of discovering how it all began. Above: young Joe and young Joan (Harry Lloyd and Annie Starke)

And what a good job he does, as we watch Joe’s ego being relentlessly stroked by Nobel flunkies, spot the return of what we already suspect has been his relentlessly roving eye, and, as Runge begins to blend distant past with present, with the creative use of flashback, start the fascinating progress of discovering how it all began. Turns out Joan was once an aspiring writer too… and rather a good one.

Despite being set in 1992, this often amusing but sharply insightful film is absolutely perfect for the times, the story of a highly intelligent woman who’s played a supporting role to a man her entire life but who, all of a sudden, might just have had enough.

It’s not a film, however, simply content to blame men for everything. Yes, Joe is clearly a monstrously deluded narcissist but Joan has been complicit in her own subjugation, almost opting for her behind-the-scenes role.

And it was another woman – a nice cameo from Elizabeth McGovern – who so influentially tells her not to bother writing herself. It’s a man’s world, she’s told. But that was in 1960: it certainly isn’t any more.

The last lap smacks a little of melodrama. Christian Slater is splendidly ghastly as a desperate would-be biographer and Pryce gives a masterclass in ageing male vanity, but it’s Close who shines in a film tailor-made for her, conveying more by quietly saying and doing almost nothing for a magical moment or two than most actors noisily do in an entire film.

Black 47 is set amid one of the most shameful and frequently overlooked periods of British Imperial history, the Irish potato famine of 1845-52, when Ireland’s vital potato harvest succumbed to blight, the fields turned black and an estimated one million people starved to death. British landlords responded with evictions, demolitions and enforced estate clearances.

But while the Great Famine provides the brutal historical backdrop, Lance Daly’s gripping film is, at heart, a Western, complete with avenging anti-hero, relentlessly pursuing posse and a couple of cracking shoot-outs.

It plays out in an authentic mix of English and subtitled Gaelic, and James Frecheville is terrific as the stony-faced Feeney, the Irish Ranger who has deserted from the British Army to return to Ireland, only to find his family either dead or living in abject poverty. And when another eviction ends in tragedy, he sets his mind on only one thing: bloody revenge. 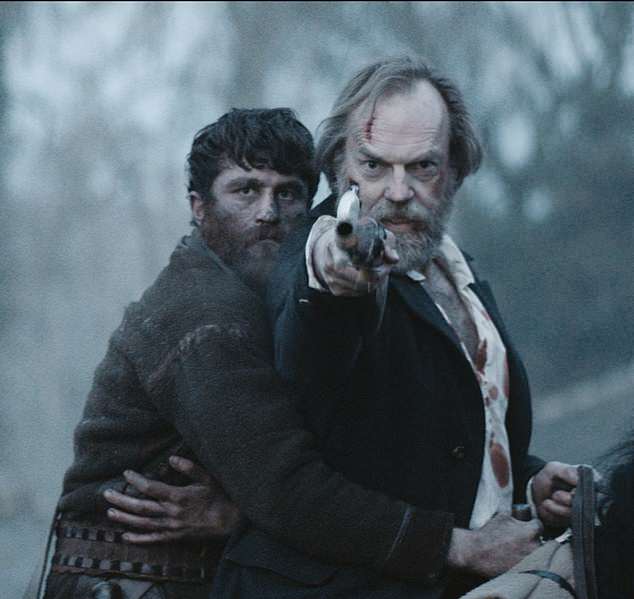 Black 47 is set amid one of the most shameful periods of British Imperial history, the Irish potato famine of 1845-52. Above: Hugo Weaving and James Frecheville

With Hugo Weaving on top form as a British soldier-turned-policeman of dubious morals, and even more doubtful loyalties, this is a well-told and powerful story with historical resonance that echoes still today.

Set in 1977, Dusty and Me is a gently heart-warming, semi-romantic comedy so old fashioned you can’t believe that people make things like this any more.

But its understated charms do grow on you as we watch clever, scholarship-winning Derek Springfield (inevitably nick-named ‘Dusty’) leave his posh boarding school and return uncomfortably to his working-class Northern roots where he falls first for an unloved greyhound and then for the rather lovely daughter of the local chippie. Simple but quite sweet. 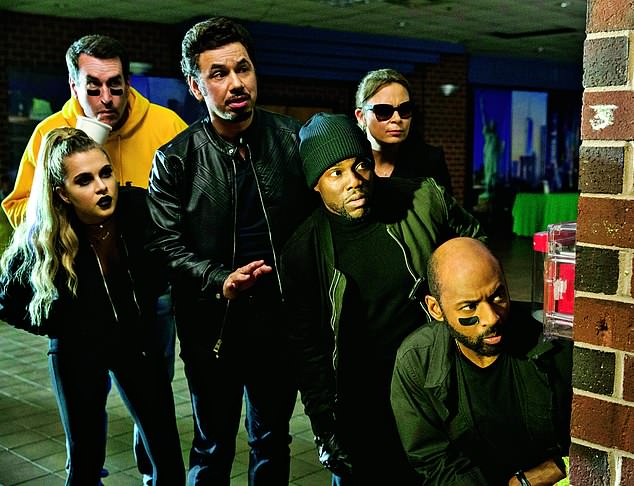 You can’t say Night School doesn’t have its heart in the right place, featuring as it does a man whose adult life has been handicapped by what we instantly recognise as dyslexia

You can’t say Night School doesn’t have its heart in the right place, featuring as it does a man whose adult life has been handicapped by what we instantly recognise as dyslexia and yet is given a second chance to make those vital high-school grades by attending night school. That’s the good news.

The less good news is that it’s another Kevin Hart vehicle and that the diminutive American comedian never aims high and is definitely an acquired taste. It has some funny and some sweet moments, both of which, sadly, are outnumbered by its misfiring moments. Shame.