Out of her costume! The Wiggles star Emma Watkins shows off her fit figure in tight activewear as she goes for a stroll with fiancé Oliver Brian during Sydney’s lockdown

She’s the iconic children’s performer who is instantly recognisable thanks to the bright yellow ballet-inspired costume she wears in The Wiggles.

But Emma Watkins was out of her signature attire on Monday and slipped into trendy activewear as she took her dogs for a walk around Sydney with her fiancé Oliver Brian.

The 31-year-old professional dancer showed off her fit figure in a pair of tight leggings and a fitted zip-up sweater.

Out of her costume! The Wiggles star Emma Watkins showed off her fit figure in tight activewear as she went for a stroll with fiancé Oliver Brian and the couple’s dogs during Sydney’s lockdown on Monday

The flamed-haired star upped the ante during the light exercise session by wearing a pair of ankle weights.

Makeup free, she revealed her youthful visage and tied her red locks up in a low-key bun.

Meanwhile, fellow Wiggles musician Oliver was also dressed casually for the stroll in a pair of green trousers, a T-shirt and a jacket. 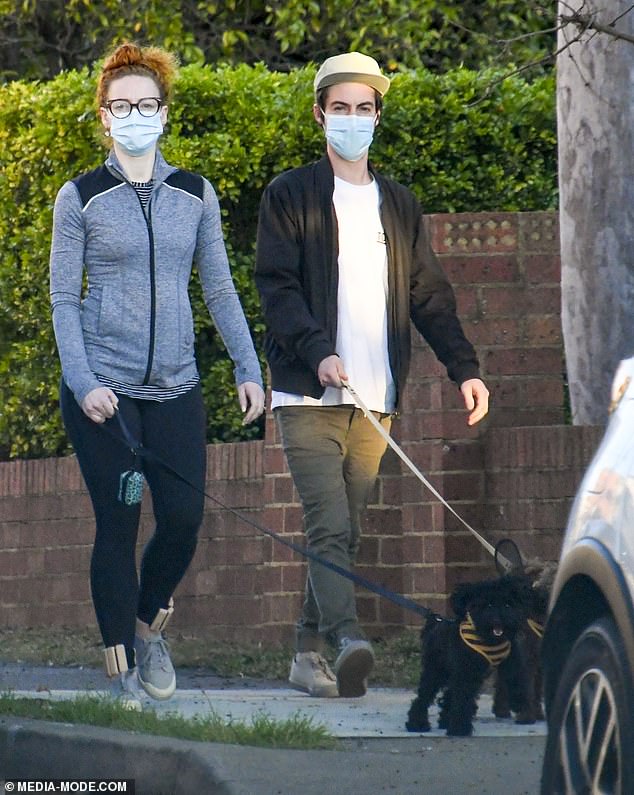 Work it! The flamed-haired star upped the ante during the light exercise session by wearing a pair of ankle weights

The couple both wore face masks during the walk.

She shared the exciting engagement news on her Instagram page while posing alongside her beau.

She captioned the picture with: ‘When life gets more sparkly’.

The performer shared further photos from the proposal to her Instagram Stories, revealing it had occurred in stunning countryside. 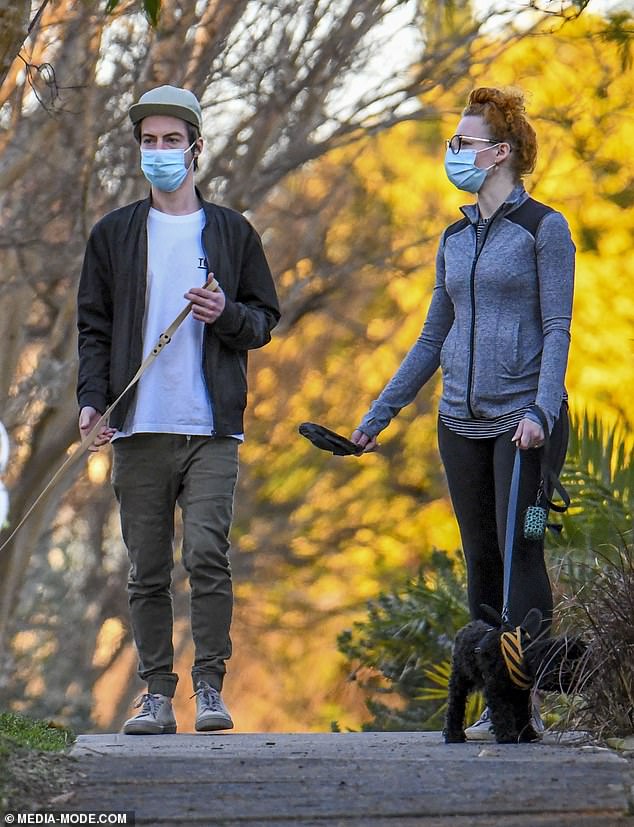 Natural beauty: Makeup free, she revealed her youthful visage and tied her red locks up in a low-key bun

She absolutely beaming as she showed off her sparkler in a number of images, including one where she cuddled up to her musician fiancé.

One image showed Emma posing alongside a pony, showing the animal her ring, which he captioned: ‘Approval from the locals’.

Emma confirmed her relationship with Oliver in an interview with The Daily Telegraph’s Stellar Magazine in December 2019.

‘Yes, I’m in love and I feel very excited to tell you,’ she told the publication, describing their relationship as ‘new’ at the time. 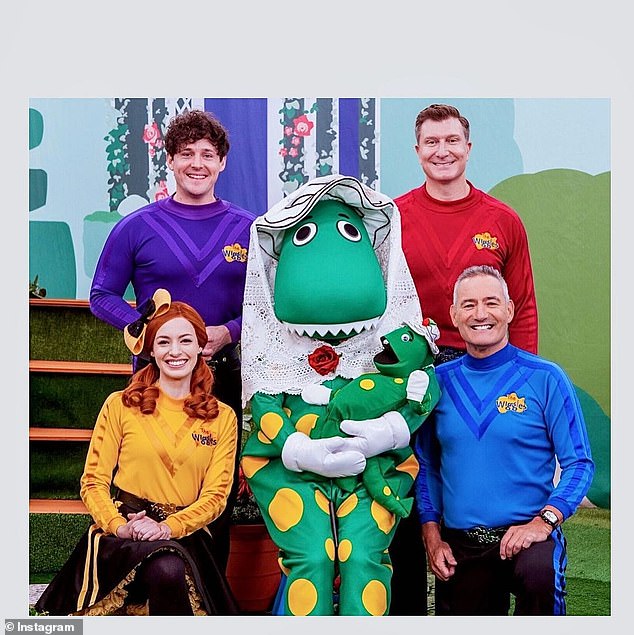 Signature uniform: Emma is instantly recognisable thanks to the bright yellow ballet-inspired costume she wears in The Wiggles

Emma recently listed her East Ryde home for $1.6million and revealed her plans to move out of Sydney.

According to a report by Domain on Friday, the 31-year-old Wiggles star decided to list the property after receiving multiple expressions of interest.

She also wants to move closer to her parents, who have since moved out of Sydney, where Emma was born and raised.

‘I was lucky enough to grow up in Ryde and I love the area and community,’ the Yellow Wiggle told Domain. 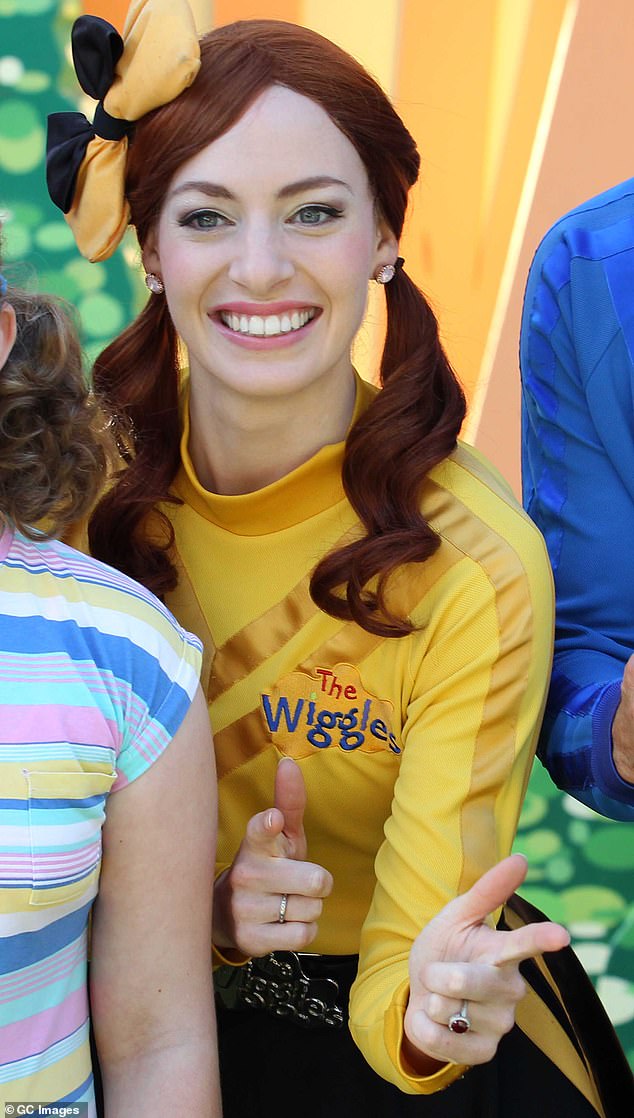 Getting wiggy with it: The singer and dancer also wears a red wig as she performs with the group

‘My parents have moved away from Sydney and now I have been looking at places to be closer to them.

‘I’m sad to be leaving this beautiful home and area for the moment, but the new owners can look forward to making really special memories here.’

While it’s not known where Emma is moving to, she purchased the three-bedroom home in March 2019 for $1.3million. 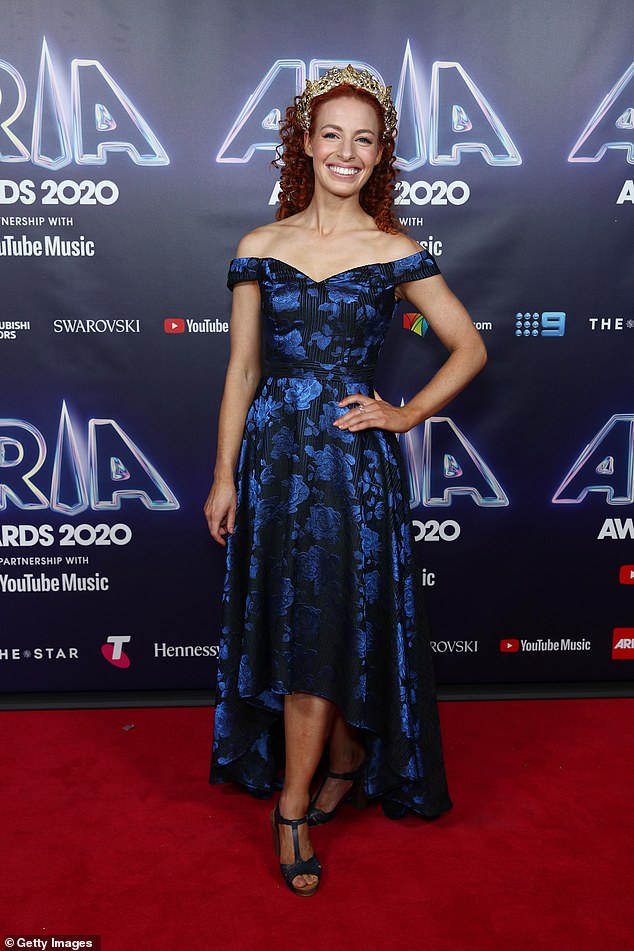 Stunning: Emma is seen on the red carpet at the 2020 ARIA Awards