If you’re hoping to be successful on a dinner date, be more adventurous when choosing from the restaurant menu, a new study suggests.

Researchers in Pennsylvania have found that people who are open to try new foods are perceived as more sexually desirable and less sexually restricted.

Meanwhile, a reluctance to try new foods – known as ‘food neophobia’ – and sticking to the safe option on the menu is perceived as something of a turn-off.

A willingness to engage in trying something new at the dining table could be a ‘cue’ for a willingness to have an intimate experience with someone new as well, the experts suggest.

If you want more luck with love, be more adventurous when choosing from the dinner menu, the study suggests

Food neophobia is the fear of trying new food.

It is mainly seen in children between two and six years of age, but can be seen in adults too.

Food neophobic adults tend to restrict their diet to a few familiar products and refuse to eat any new foodstuff.

As a consequence, they suffer from deficiencies and often from social exclusion.

This can be explained by several phenomena, such as poor dental health or gastric troubles which can prompt seniors to avoid certain foods.

The study has been led by Hannah Bradshaw, an assistant professor of psychology at Washington & Jefferson College in Pennsylvania.

‘I was talking with a group of friends, and someone mentioned having dated a person who didn’t like to try new foods and only ate things like chicken nuggets and macaroni and cheese,’ she told PsyPost.

‘I noticed that people seemed to think this was an undesirable quality in a dating partner.

‘This led me to wonder whether one’s willingness to try new food provides cues to mating-relevant characteristics.’

For the first stage of their experiments, Bradshaw and colleagues recruited 193 heterosexual undergraduate students.

Participants were randomly assigned to read a short story about a person of the opposite sex who was either willing or reluctant to try new food.

Overall, subjects who were reluctant to try new food were rated as less desirable sexual and romantic partners than those who were described as willing to try new food, they found.

Researchers then recruited a further 323 heterosexual participants, who were tested with fake dating profiles on the dating app OKCupid.

The fake profiles revealed a little bit about their pickiness when it came to food. They’d say something like ‘I’m always up for trying something new and different’, or, conversely, ‘I’m pretty picky. I know what I like and I stick with what I know’.

While viewing each profile, participants rated the target’s openness to experience and sociosexuality – the willingness to engage in sexual activity outside of a committed relationship.

People in the OKCupid profiles who were more willing to try new food were perceived as having had a greater number of past sexual partners, the team found.

They were also perceived as being more open to uncommitted sexual relationships and less sensitive to sexual disgust, which is said to deter individuals from engaging in sexual activities.

‘Our results show that people use information about one’s willingness to try new foods when making judgements about important mating-relevant characteristics,’ said Bradshaw. 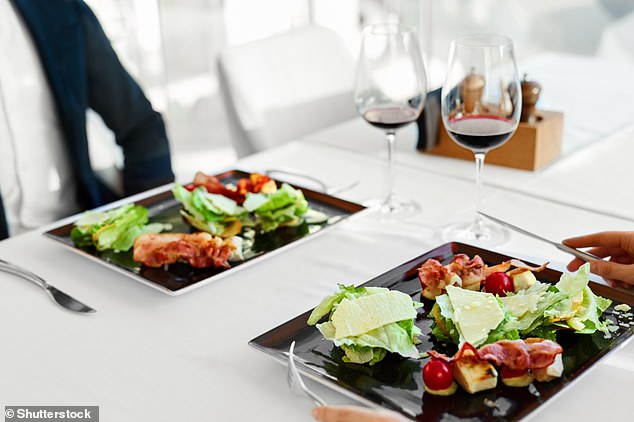 Stay away from the burgers and chicken nuggets if you want to give the impression to your date that you’re sexually experienced, the study’s results suggest

‘Essentially, one’s willingness to try new food plays a role in the impressions formed by prospective dates and mates.’

The study, published in the journal Personality and Individual Differences, follows previous research that’s uncovered some unusual links between what we eat and how we’re perceived.

In 2015, researchers reported that people who eat smaller meals and maintain healthy diets that include higher fruit and vegetable intake are seen as more physically attractive than those who eat larger, more unhealthy meals.

And in 2019, another study found adolescents and young adults who adhere to dietary restrictions, such as those with severe gluten allergies, are viewed as more complaining and judgemental.

Socialising and casual dating increases the consumption of alcohol among young people, according to a recent study.

Researchers in the state of Washington surveyed more than 700 young adults on their relationship status, dating habits and alcohol use over two years.

They found that when they were more interested in socialising and casually dating, they tended to drink more booze.

But when they were in serious relationships, not interested in dating or placed less importance on friendship, their alcohol use was significantly lower.

When we’re dating, alcohol facilitates romantic and sexual relationships, the experts say – and likely eases those awkward first encounters across the dinner table.