The winning images in the BigPicture Natural World Photography Competition 2021

They are just some of the stars of the poignant winning images in this year’s BigPicture Natural World Photography Competition, hosted by the California Academy of Sciences.

Entrants to this year’s contest were asked to submit images that showcased the Earth’s biodiversity and the ‘mounting threats to the natural world’.

The contest was open to both amateur and professional snappers and featured seven categories – Art of Nature, Aquatic Life, Winged Life, Landscapes, Waterscapes, and Flora, Terrestrial Wildlife, Human/Nature and Photo Story: Out of the Ordinary.

Winning images were chosen in each category and a single image was picked as the overall Grand Prize winner. This year, the triumphant snap was a heartbreaking photo of a resilient kangaroo and her joey standing in a burnt-out plantation following bush fires that hit the south coast of Australia in 2020. It was taken by Canadian photojournalist Jo-Anne McArthur, who scooped the $5,000 (£3,537) cash prize.

The winning images first appeared in bioGraphic, an online magazine about science and sustainability and the official media sponsor for the competition. Scroll down to see some of the most striking photos from the contest…

This poignant image was the overall winner of this year’s BigPicture Natural World Photography Competition. It was taken by Canadian photographer Jo-Anne McArthur as she accompanied an organisation called Vets for Compassion as they searched a eucalyptus plantation for injured and starving koalas in the wake of a bush fire near Australia’s southeast coast last year. Magazine bioGraphic said: ‘For McArthur, it was a powerful moment: two of Australia’s most iconic species – the kangaroo and the eucalyptus tree – standing at a worrisome crossroads in their history. But the individuals in her frame were also symbols of hope, that life can persist against all odds’ 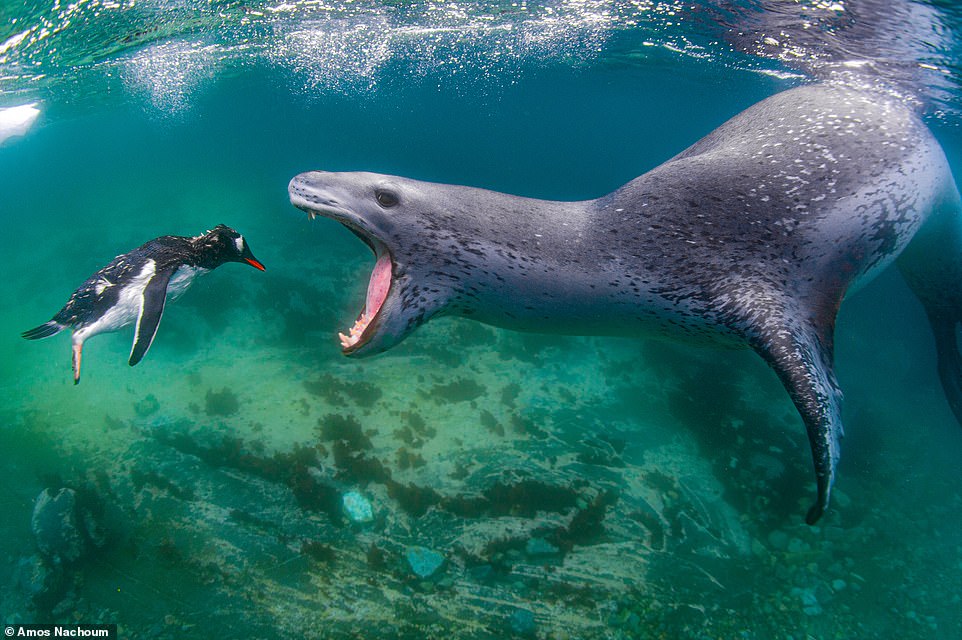 Taken at Pleneau Island in the Antarctic, this amazing image by US snapper Amos Nachoum was a finalist in the Aquatic Life category. It shows a leopard seal about to eat a Gentoo penguin. bioGraphic said: ‘With their silky coats, big, dark eyes, and perpetual grins, leopard seals can look downright cuddly lounging on Antarctic ice floes. It’s safe to say, though, that penguins have a different perspective of these powerful apex predators. Weighing up to 600 kilograms (1,320 pounds), with powerful jaws lined with sharp teeth, and long front flippers that propel them through the water at speeds up to 37 kilometres per hour (23 miles per hour), leopard seals are capable of catching and subduing a wide range of prey’ 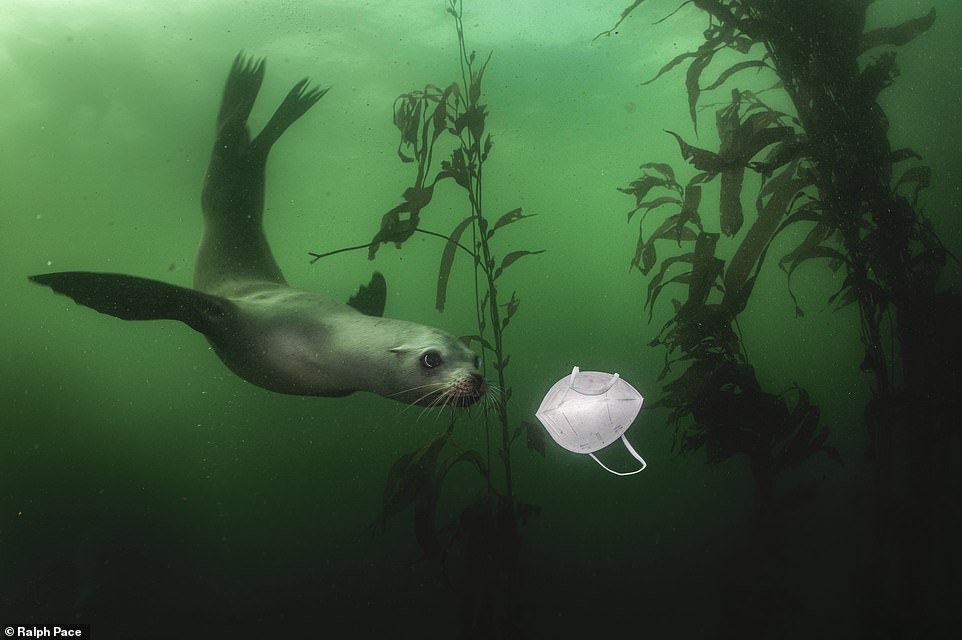 This incredible image by US photographer Ralph Pace was the winner of the Human/Nature category. It was taken in Monterey, United States, in November 2020. bioGraphic explained: ‘Though a post-pandemic world is finally in sight, the scars of Covid-19 will live on for years to come – including those on our environment. According to one study, 129 billion face masks and 65 billion gloves were used globally each month during the pandemic. Much of that equipment – including this mask being investigated by a curious California sea lion –  is made from durable plastics that take hundreds of years to break down’ 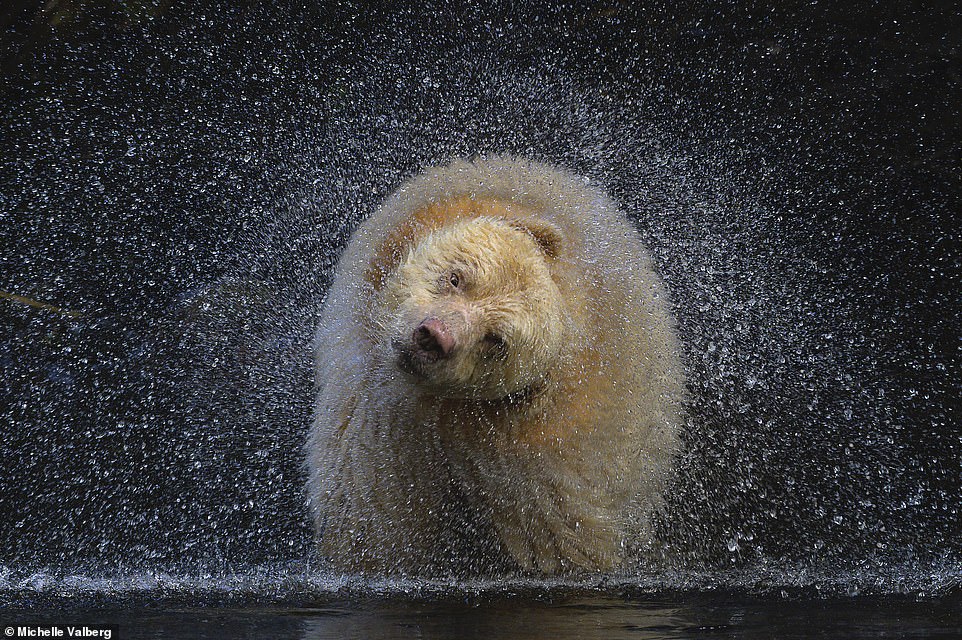 This stunning shot is titled Boss, which is the name of the bear in the picture. It was taken in the coastal rain forests of British Columbia, Canada, by Canadian photographer Michelle Valberg and won the Terrestrial Wildlife category. bioGraphic explained: ‘While most of the Kermode bears that roam this region’s coastal islands are black, about 10 to 25 per cent are white. This distinctive colouring is not an albino condition, since the bears have pigmented skin and eyes. It is, however, an inherited trait that is fully recessive, and scientists had long wondered why white-morph bears – often called spirit bears or ghost bears – were so common on the islands’ 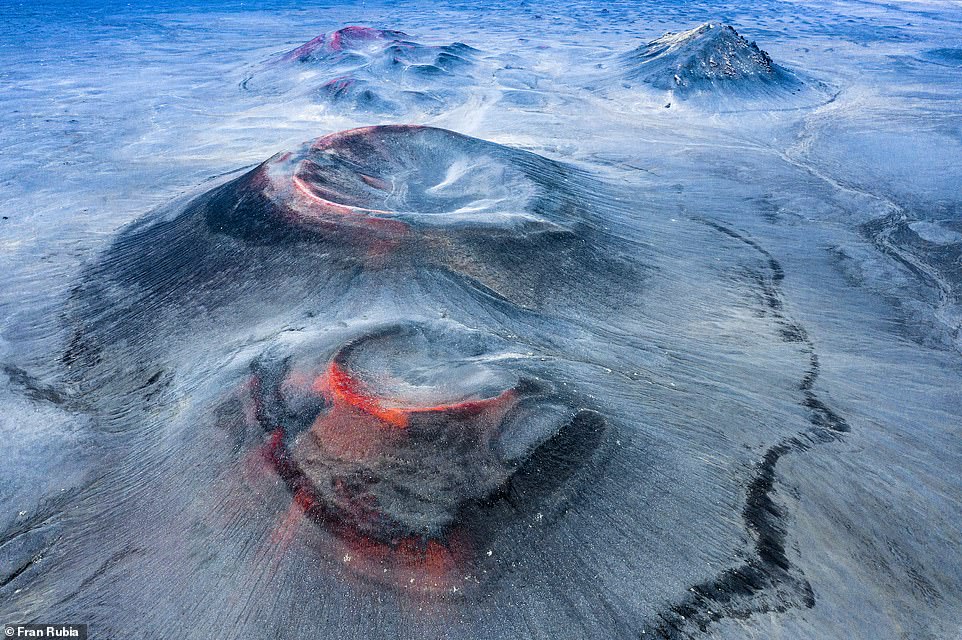 This jaw-dropping shot was declared the winner of the Landscapes, Waterscapes, and Flora category. It was taken by Fran Rubia, a Spanish electrician who has studied photography through the Centro Andaluz de la Fotografía. The image was snapped via drone at the Fjallabak Nature Reserve in Iceland. bioGraphic said: ‘What looks at first glance to be lava flowing down the sides of these Icelandic volcanoes is, in fact, iron oxide deposited during past eruptions. Unlike Geldingadalir, a volcano just 20 minutes away from Reykjavík that has been actively erupting since March 19, 2021, the last eruption here in FjallabakNature Reserve took place in 1480’ 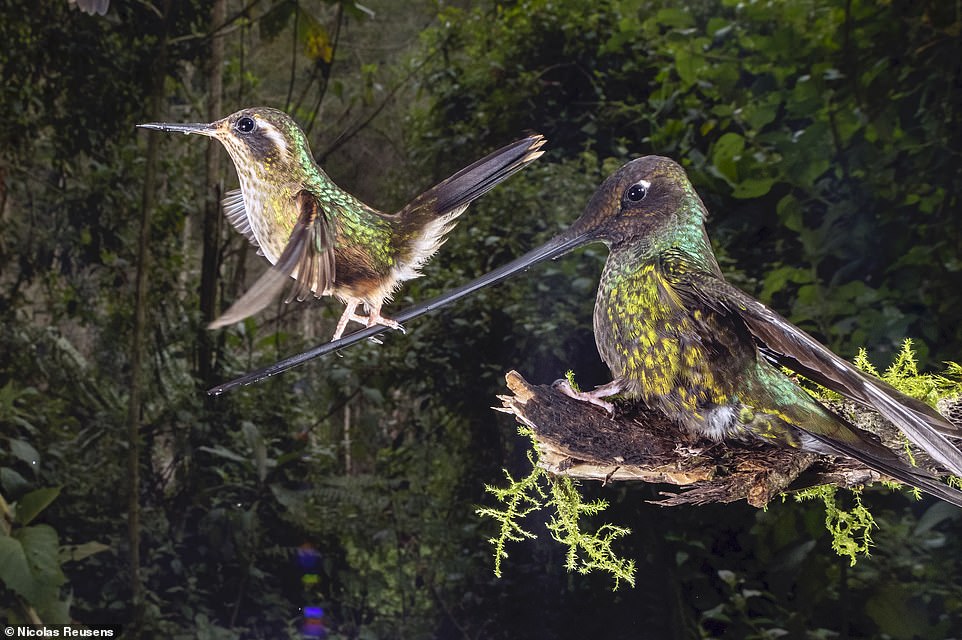 Taken in the Ecuadorian highlands, this mesmerising image depicts a speckled hummingbird taking a rest on the beak of a sword-billed hummingbird. The shot was taken by Nicolas Reusens and it was a finalist in the Winged Life category. bioGraphic revealed: ‘For hummingbirds, especially species that live in the cool and wet Andean cloud forests like these two, calories – those they consume and those they conserve – are key to survival and reproduction. After all, tiny though they are, it can take hundreds of flower visits per day to keep a hummingbird running. So, a conveniently placed perch, and one that comes with its own predator-detection capabilities, is hard to pass up’ 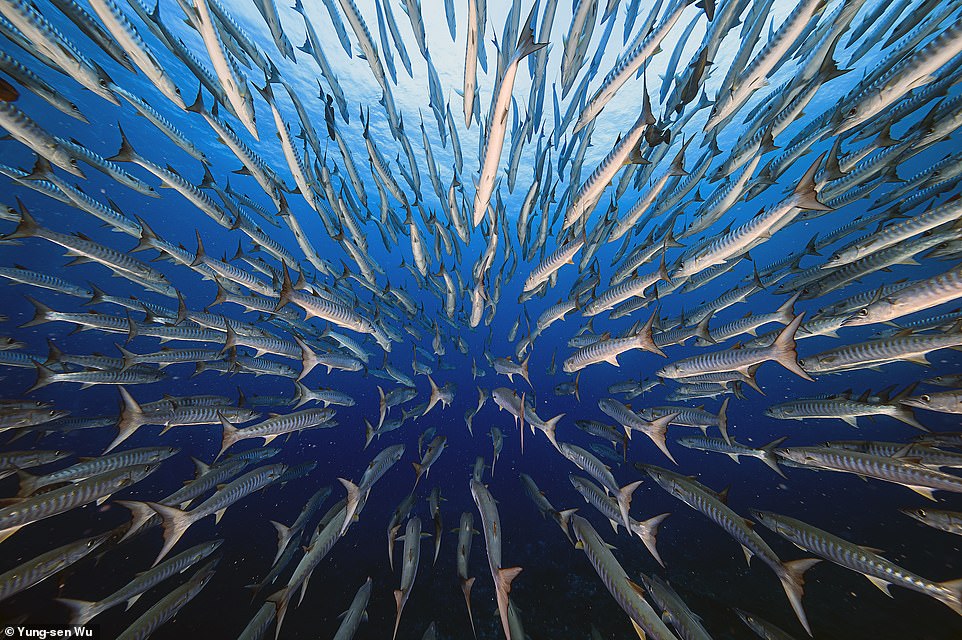 Winner of the Aquatic Life category was this striking shot taken in The Blue Corner dive site in Palau, an archipelago of over 500 islands in the western Pacific Ocean. It was snapped by self-taught photographer Yung-Sen Wu from Vietnam, who swam with this battery of barracuda for four days, looking for the perfect angle. At the end of a 50-minute dive on his fifth day, the fish allowed him to swim among them as part of the school and he captured this fish eye view. On the sixth day, he joined the fish without his camera This dramatic image is one of a series of six that won the Photo Story category. It was taken by Canadian photojournalist Peter Mather in Yukon Territory, Canada. bioGraphic explained: ‘In Canada’s Yukon Territory, grizzly bears delay their hibernation to catch the last salmon runs of the season. As temperatures drop below -20C, the grizzlies’ water-soaked fur freezes into a chandelier of icicles that jingle with each step. Local Indigenous peoples tell stories of arrows unable to penetrate the icy armour of the bears. Unfortunately, Yukon’s ice bears, as they are known, are facing new threats for which their armour is no match. Climate change and other human activities are leading to sparse salmon runs, reduced river flows, and shorter winters, all of which put the ice bears’ way of life in jeopardy 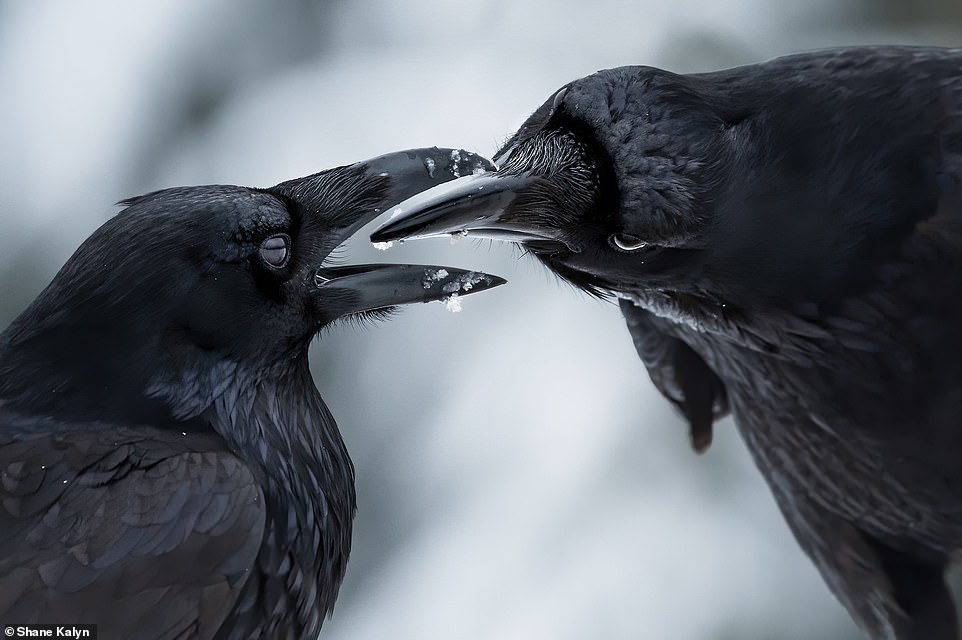 Shane Kalyn, a self-taught photographer who works as a fisheries technician with the Canadian government, is the man behind this incredible image. It came out on top in the Winged Life category. bioGraphic revealed: ‘Common ravens usually mate for life, and this intimate, open-beaked moment captured by Shane Kalyn is likely an example of allopreening – reciprocal grooming that serves both to solidify social bonds and to keep plumage clean’ 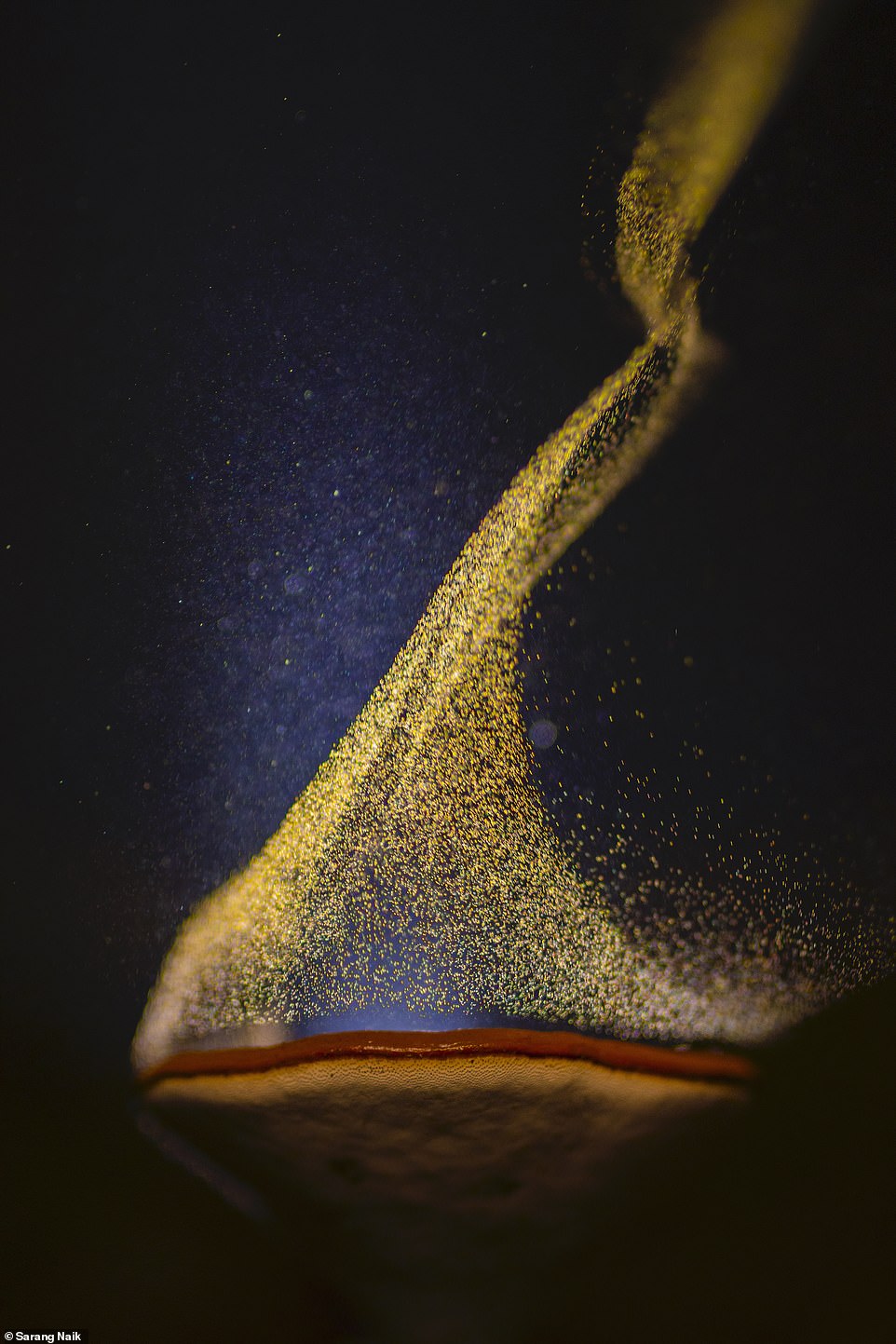 This stunning photo won the Art of Nature category. It was taken in Toplepada, India, by Sarang Naik, a nature and wildlife photographer who specialises in creative and abstract photography. It shows a mushroom releasing spores during the monsoon season. bioGraphic said: ‘In due time, this magical pixie dust will create more mushrooms – and not only in the way that you might think. While a small number of these mighty motes will land on soil suitable enough for producing the branching underground filaments that beget new mushrooms, many more spores will find their way into the atmosphere to serve an equally important purpose. Each year, millions of tons of fungal spores are aerosolized into the atmosphere where they provide the solid core for the condensation of water into clouds and rainfall, breathing life into forests around the world and sustaining future generations of fungi’ 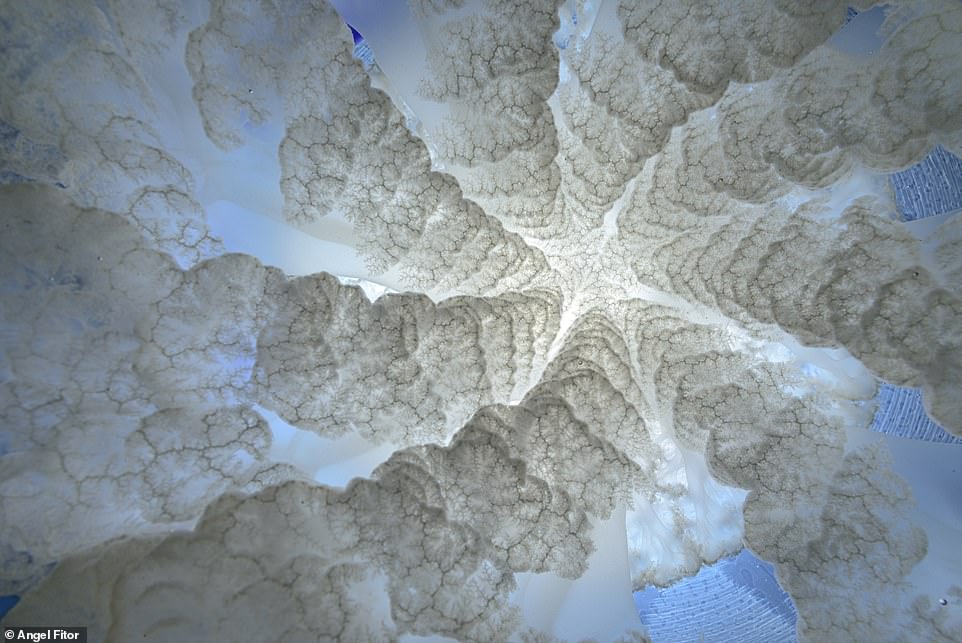 Spanish snapper Angel Fitor was a finalist in the Art of Nature category with this incredible image he took in the Mar Menor lagoon in southern Spain. bioGraphic said: ‘This beautiful and mesmerizing view may very well be the last thing that many hapless ocean-going creatures see before falling victim to the barrel jellyfish. Also known as the dustbin-lid jellyfish for the size and shape of its bell when washed up on UK shorelines, the species is one of the largest jellies in the world, reaching 90 centimetres (35 inches) or more in diameter’ 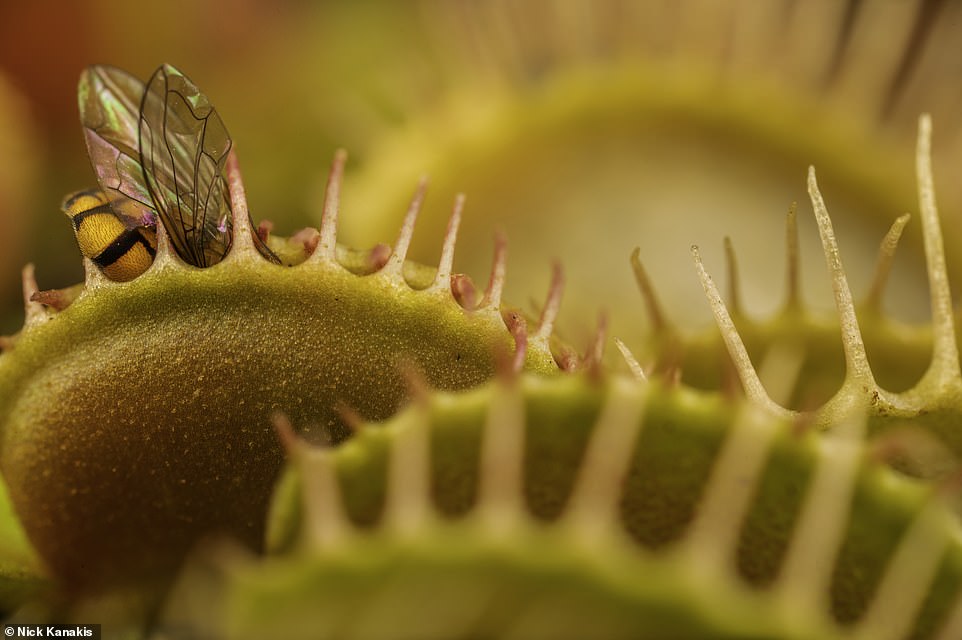 Dallas photographer Nick Kanakis is behind this striking image, which was chosen as a finalist in the Landscapes, Waterscapes, and Flora category. It shows a Venus flytrap capturing a hoverfly. bioGraphic explained: ‘In its native long leaf pine forests of the Carolinas, carnivory is a means of survival. There, the species makes its living much like other plants, harnessing energy from sunlight to make its food. In contrast to many other plants, however, the Venus flytrap must also catch vital nutrients that are missing from the soils in which it grows. With hinged leaves that snap shut at the slightest touch of hair-like triggers on their surfaces, it’s highly specialised to do just that, as this hoverfly going about its business in a North Carolina forest last November learned the hard way’