The wonders of Oz: Wild encounters await on an epic family trip across Western Australia

Standing beneath a blazing Outback sun with my wife and two children, I am staring at a rock.

It’s a big rock -not as big as expected, but certainly impressive -and looks like a wave, hence the name.

‘It’s just a rock!’ protests my daughter, Emma, 14. Seemingly, all of Australia’s flies cloud round my head. My son, Sean, 12, wears a black fly-net over his face like a little beekeeper. Would it be bad form to steal it? ‘What did you expect to see at Wave Rock?’ Emma adds sarcastically.

Impressive: Wave Rock is the result of erosion caused by water running down the cliff face

This is the only problem with Western Australia: everywhere is 250 miles away. This is my fifth trip, and for some reason I always forget -maybe because it has so much else in its favour. It is worth the drive.

The rock itself is only 110m long and 15m high, but from its summit we gaze over flatlands, taking in the lakes and strange geological formations.

Twelve miles up the road we find a cave decorated by ancient Aboriginal handprints.

Wave Rock campsite is busy, partly due to its location midway between Perth and the seaside resort of Esperance, which explains why so many cars out in the desert are towing boats. Thankfully the icy-cold swimming pool is empty -ready to remove all that desert sand.

After another look at Wave Rock -perennially changing with the light -we drive off in the vague direction of the coast. 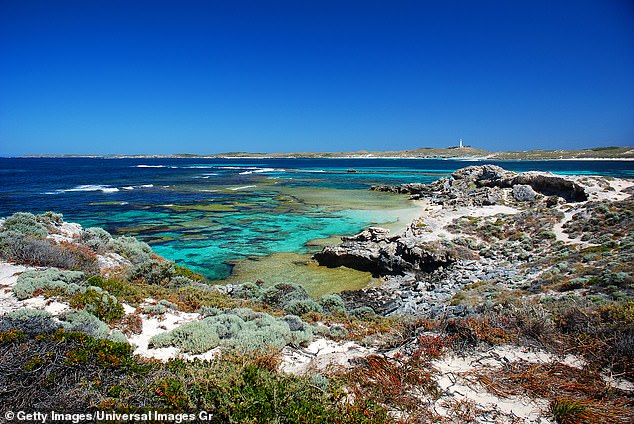 In the distance: Rottnest Island is home to Western Australia’s native marsupial the quokka

Driving in Australia is possibly easier than anywhere on earth. The cars are usually automatic and right-hand drive, roads are well-maintained and relatively empty away from the cities.

‘How far are we going?’ asks Sean again as we drive through beautiful forests, gigantic rolling plains and quirky little towns with roadhouses where the only food seems to be meat pie -a problem when your daughter’s a veggie. ‘Two-hundred-and-fifty miles, actually,’ I say. The children, jet-lagged, are unamused.

After the drive and a ferry trip, we get to the tiny island of Rottnest eventually. While sitting at a beachside bar, something hairy touches my bare leg. I look down, imagining a giant spider, to find an adorable little creature -round, furry, like a small wombat -staring up in hope of food. It is my first quokka, a marsupial native to WA. 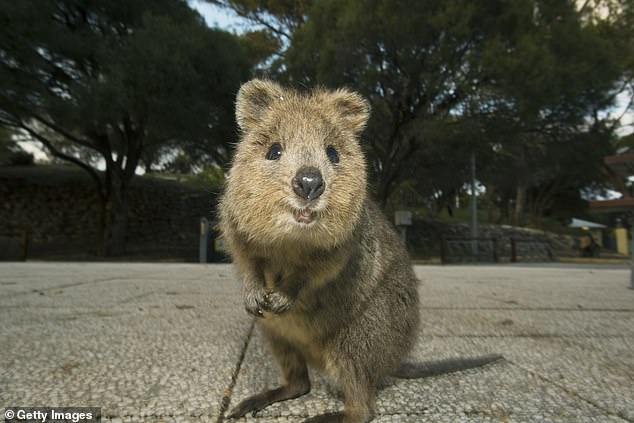 Chocka with quokkas: Petting or feeding ‘Rotto’s’ native animals is frowned upon

‘Rotto’, as this seven miles squared island off the coast is called, is chocka with quokkas. But petting or feeding them is frowned upon in case they become reliant on humans.

Emma contents herself by getting the perfect selfie as Sean snorkels among pelicans in search of dolphins, and peacocks saunter by.

Back on the mainland, WA’s ‘Gateway to the Outback’, Perth, is a cluster of gleaming highrises and suburbs that stretch for miles along the Indian Ocean. In an Irish pub, a Scouser tells us how he came for a holiday 30 years ago and never left.

Who can blame him? Around 12 miles south we hit Fremantle, a cosmopolitan seaside town with trendy markets, bistros and the Cappuccino Strip packed with cafes and restaurants.

The sea is calm and warm, there’s a raft with diving board within reach -so why is no one swimming? Perhaps it’s because WA’s waters have so many sharks. Somewhat ashamed, we content ourselves with a paddle.

What’s new about this part of the world is that you can now fly direct from London to Perth, WA’s state capital, although we took the cheaper option via Bangkok.

Every time we come, we visit the Pinnacles, an eerie collection of limestone rocks out in the desert. As you walk between the jagged pillars on sand

marked with the footprints of strange beasts, it’s like exploring another planet.

Eerie: The Pinnacles is a jagged collection of limestone pillars in the Outback

In WA’s verdant southwest, deep in a jarrah forest, Wellington Mill is a cluster of rustic wooden shacks. Who needs wifi when kangaroos graze nearby, some so tame we stroke their fur? We scavenge for firewood, kookaburras cackling overhead as we warily kick woodpiles in case of snakes. WA wildlife can be scary -and hilarious.

A local woman tells us about a parrot which tormented farmers. ‘It used to raid their crops,’ she laughs, ‘and when they came close, it shouted: “These seeds are rubbish!” and flew off.’ By now the children have adapted to this off-grid lifestyle and later we play cards as embers glow in the grate.

Maybe it’s because no one is talking about Brexit or that there is room to breathe. But Aussies are wonderfully welcoming -even if you’re British. Just don’t mention the cricket and, as Aussies say: ‘You’ll be right.’

Thai Airways (thaiairways.com), Heathrow to Perth via Bangkok, from £1,136 return. Hire cars can be booked through rentalcars.com from £23.56 per day. Wave Rock Caravan Park (waverock.com) cabins from £84 per night. Wellington Forest Cottages (wfccc.com.au) has self catering boltholes from £100 per night.