The world is sadder, angrier and more scared than ever before

The world is sadder, angrier and more scared than ever before while Paraguay is the happiest and most positive country, study into global well-being reveals

People across the world are sadder, more scared and angrier than ever before, according to a startling new survey into global well-being.

The study is US analytics company Gallup’s annual Global State of Emotions report and it revealed that the world has become more miserable for the second year in a row.

US analytics company Gallup’s annual Global State of Emotions report has revealed that the world is sadder, angrier and more scared than ever before

The most positive country is Paraguay, with the positive list dominated by South American nations.

It has been a tumultuous twelve months world wide with natural disasters, terror attacks, political upheaval and financial struggle gripping the globe.

The refugee crisis continued as droves of people flocked to the west to flee ISIS and other hostile forces that threatened their lives.

The study into global emotions has been published annually since 2006 and Gallup measured feelings last year by interviewing 151,000 people in more than 140 countries.

Around four in 10 people questioned in 2018 said they experienced high levels of worry on the day before the interview, while a third said they were stressed and nearly three in 10 said they felt significant physical pain.

A quarter experienced sadness, and 22 per cent of them said they were angry.

More positively, there was a slight decrease in stress levels world wide.

However, the survey paints a miserable picture of global struggle. 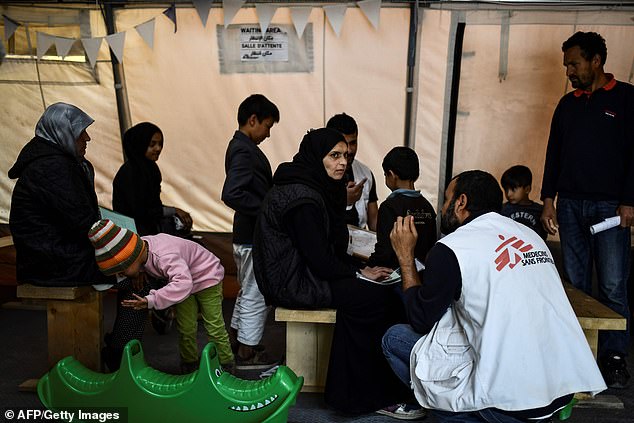 Paraguay was the most positive nation, Chad the most negative, while Greeks, for the third consecutive year, were the most stressed population in the world

Worry and sadness, which were already at record levels, each increased by one point from the previous year.

Chad, the most negative country in the world, has been beset by a range of issues.

In 2018, more than seven in 10 Chadians said they struggled to afford food at some point, while living standards continue to fall with almost 6 million of its 15 million citizens live in extreme poverty.

Citizens were also unable to access the internet for most of 2018, after their government shut it down.

In terms of stress, US adults than those in Chad, while Greeks, for the third consecutive year, were the most stressed population in the world.

On the other end of the spectrum, more than 7 in 10 people said they experienced enjoyment, felt well-rested, and smiled or laughed a lot on the day before the survey, while 87 per cent said they were treated with respect.

Latin America was the most positive part of the world, with Paraguay beating Panama, Guatemala, Mexico, El Salvador and Honduras for the happiest country.

Gallup’s global managing partner Jon Clifton wrote in the report that people in Latin America ‘may not always rate their lives the best … but they laugh, smile and experience enjoyment like no one else in the world.’

The report added: ‘Their high scores at least partly reflect the cultural tendency in the region to focus on life’s positives.’

Most positive countries in the world

Most negative countries in the world