The world is watching: Newspaper front pages from around the globe on the day of US election

The world is watching: Newspaper front pages from around the globe reveal fear and excitement on US election day

The world is watching with baited breath on Tuesday as Americans head to the polls to decide the outcome of the Presidential election after a year of unprecedented global chaos and violence in the US.

Around the globe, there were mixed feelings of fear and excitement at the prospect of who will be America’s next President.

Some of the major international newspapers avoided the subject on their front pages on Tuesday morning, choosing to wait for a potential outcome on Wednesday.

But some projected the global mood of anticipation and uncertainty.

There were cartoon depictions of the two candidates, illustrations of the American flag and photographs of some of the masked voters who will decide the outcome, their comments splashed across the front pages in various languages.

Here are some of the many global front pages on Tuesday November 3, 2020. 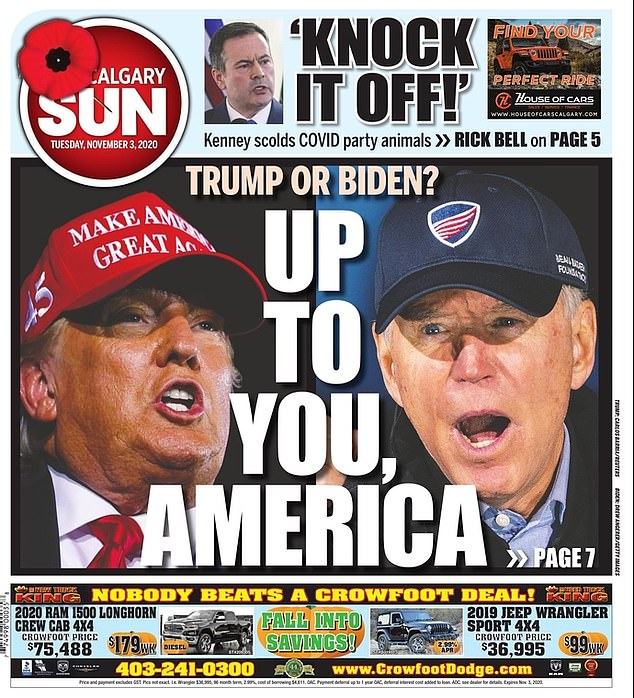 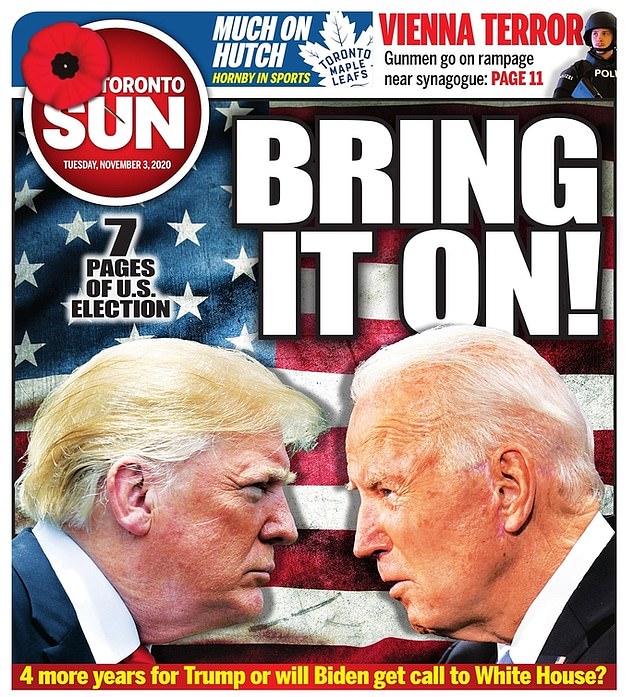 CANADA: Both the Calgary Sun and Toronto Sun went for similar head-to-head comparisons of the two candidates 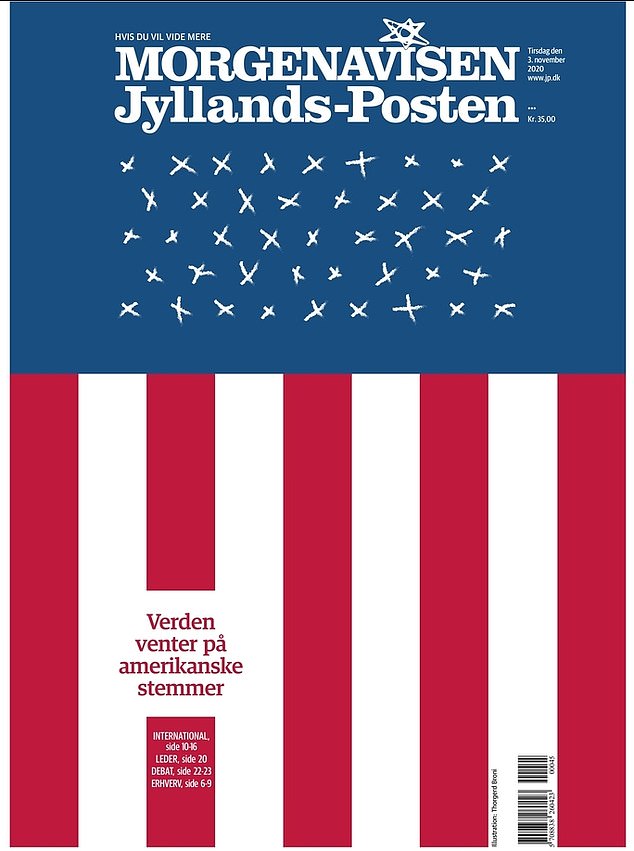 DENMARK: Danish daily broadsheet Jyllands-Posten offered an American flag illustration with the caption ‘the world is waiting for American votes’ 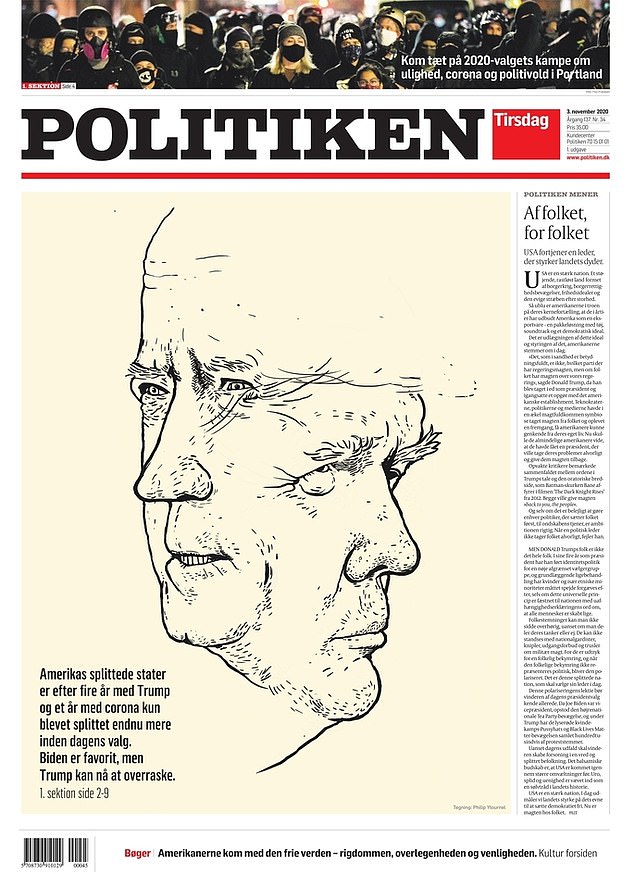 DENMARK: Denmark’s Politiken’s front page reads: ‘After four years with Trump and a year with corona, America’s divided states have only been split even more before today’s election. Biden is the favorite, but Trump may manage to surprise’ 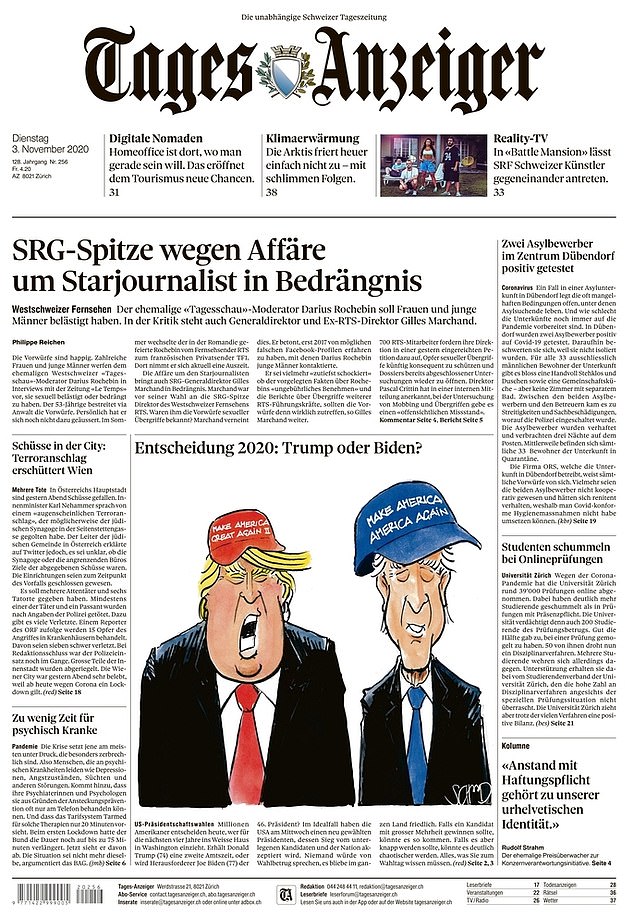 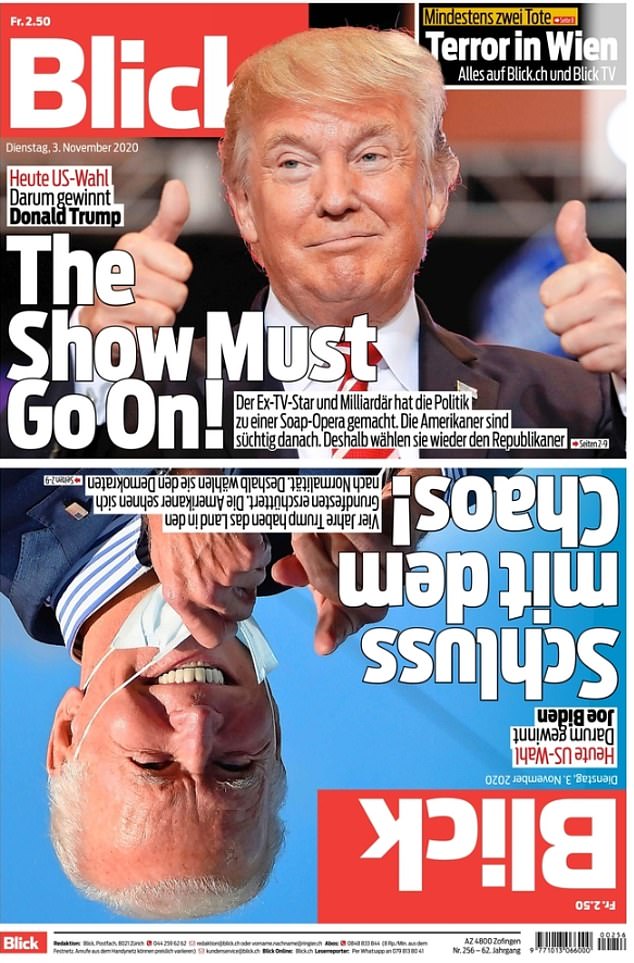 SWITZERLAND: Blick, a Swiss German-language daily newspaper showed mirroring photos of the pair with the reasons for which either might win next to them. Trump’s reads: ‘The ex-TV star and billionaire got politics turned into a soap opera. Americans are addicted to it. That’s why they’re electing the Republican again.’ Biden’s reads: ‘No more chaos! Four years of Trump have shaken the country to its foundations. Americans long for normality. That’s why they choose the Democrats.’ 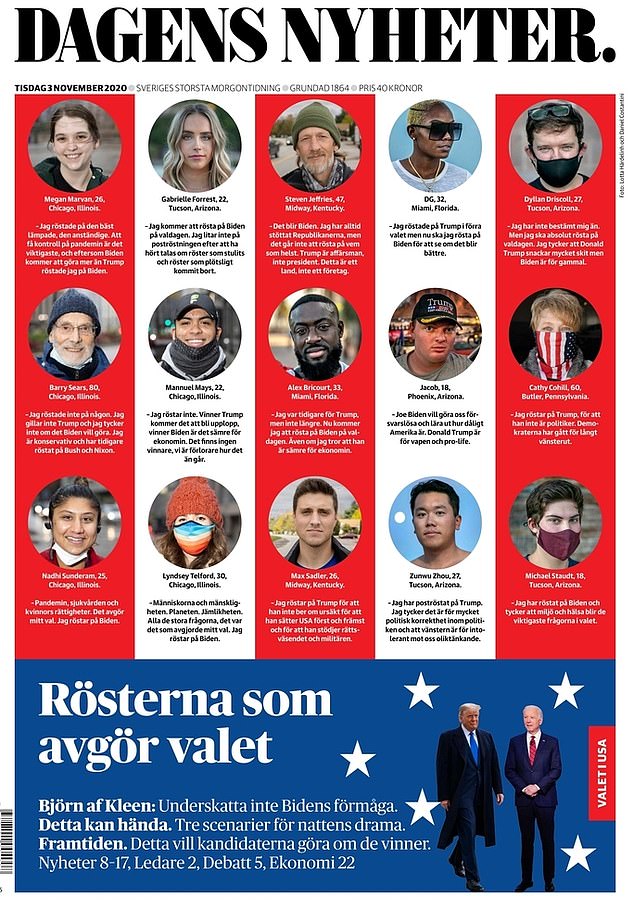 SWEDEN: Sweden quoted 12 American citizens and labeled their front page ‘the votes that decide the election’ 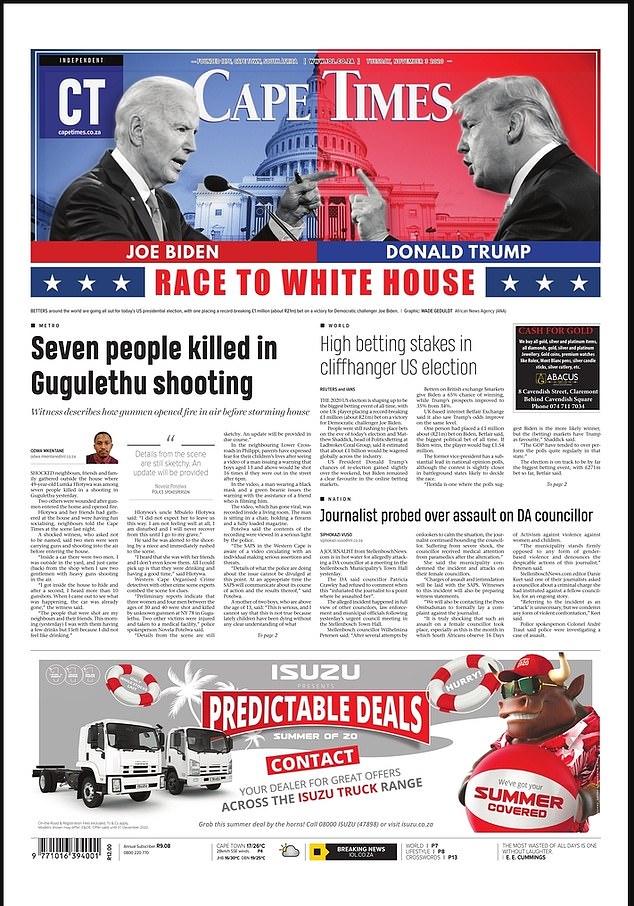 SOUTH AFRICA: The Cape Times flashed the two candidates in their respective party colors at the top of their front page 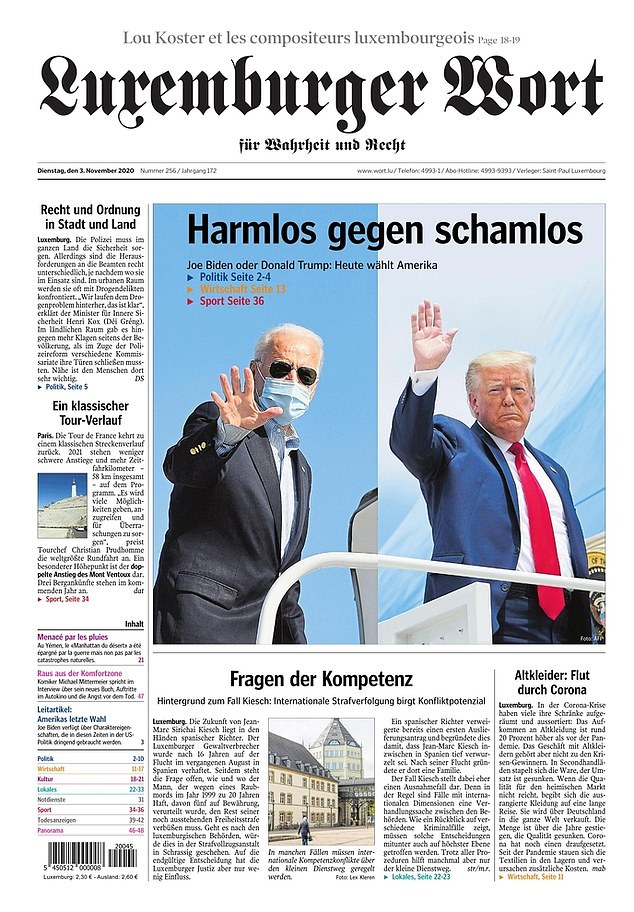 LUXEMBOURG: ‘Harmless to Shameless’ is how Luxemburger Wort characterized the two candidates 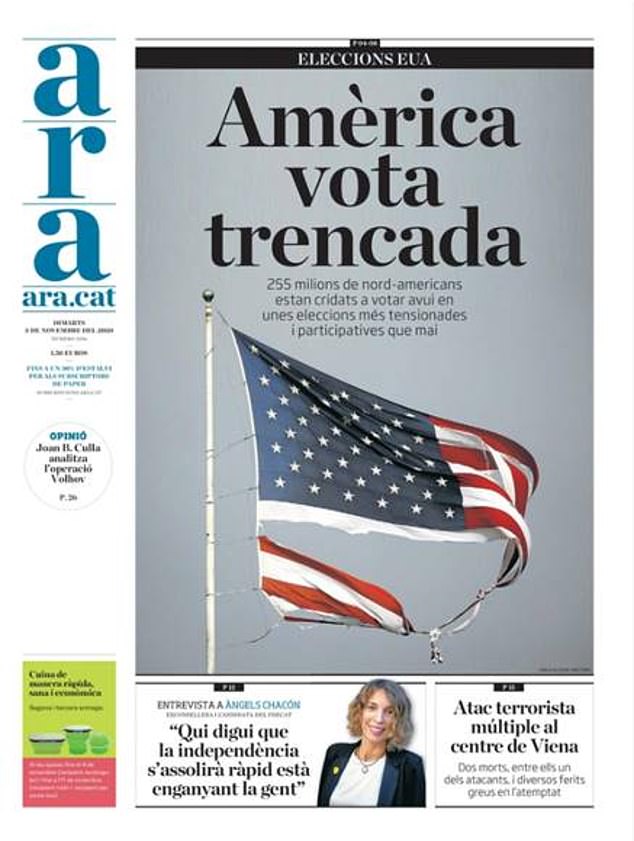 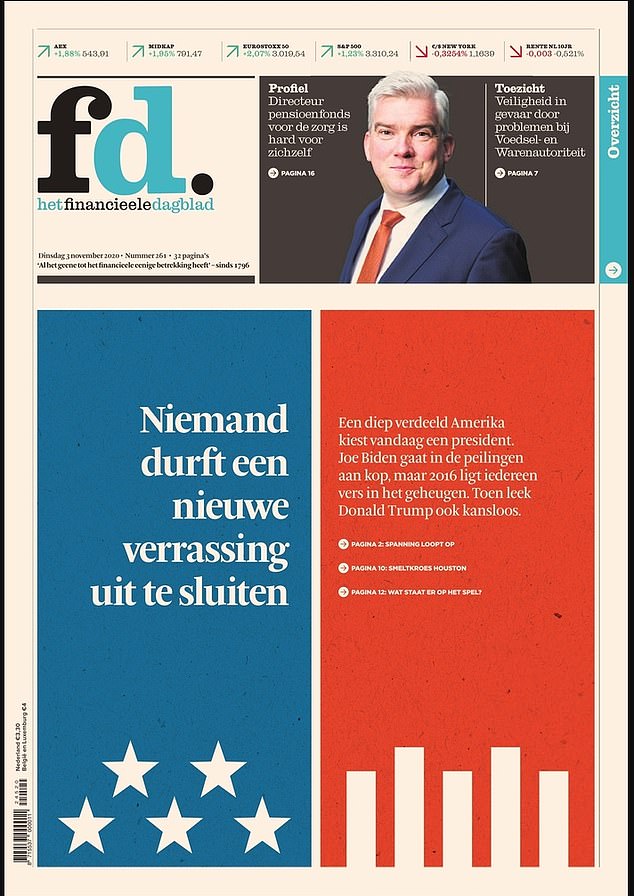 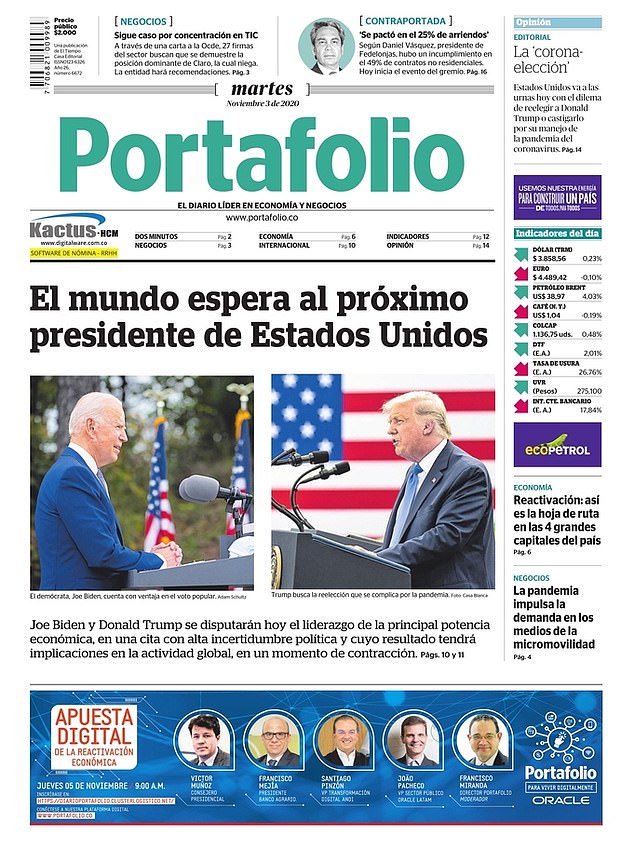 COLOMBIA: Colombia’s Portafolio ran the headline ‘the world is waiting for the next US President’