You’ve seen Petra in Jordan on the silver screen in Indiana Jones And The Last Crusade, now it’s time to plan a visit to see it in real life, because according to the adventure experts at Lonely Planet it’s the No1 place to experience in the world.

It features as the top-ranked destination in the newly released second edition of Lonely Planet’s Ultimate Travel List, a stunning coffee table book that contains the ‘definitive wish-list of the 500 most thrilling, memorable and interesting travel experiences in the world, ranked in order of brilliance’.

The global runner-up spot goes to the Galápagos Islands, followed by Uluru-Kata Tjuta National Park in Australia (third), the Okavango Delta in Botswana (fourth) and Yellowstone National Park (fifth). The top-ranked UK destination is the Lake District, which comes 40th.

Petra in Jordan is the No1 place to experience in the world, according to Lonely Planet’s updated Ultimate Travel List book 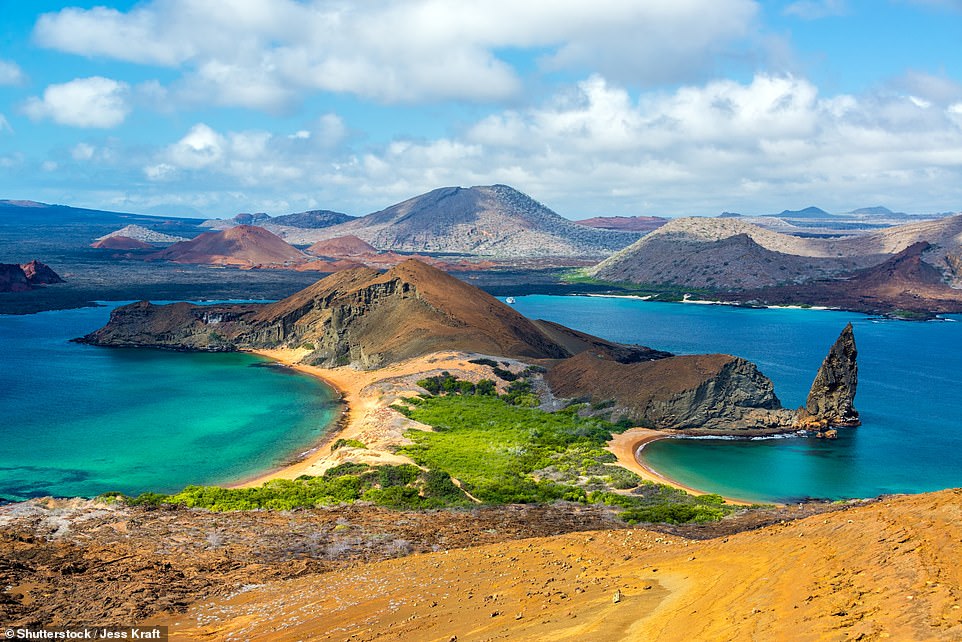 The Galapagos Islands (which comes second) is the archipelago that ‘changed the course of science’, says Lonely Planet, for it was here that Darwin developed his theory of evolution

Overall the UK scores 34 spots in the top 500, more than any other country. Completing the top five British entries are the British Museum (56th), the Wales Coast Path (82nd), the Jurassic Coast (116th) and the Brecon Beacons (153rd).

Trailing Uluru in Australia and forming the rest of the top five there are the Great Barrier Reef (11th), Sydney Harbour & the Opera House (26th), Lord Howe Island (58th) and Kangaroo Island (90th).

In justifying Petra’s coveted podium spot, Lonely Planet says that the ancient sandstone city has ‘an eternal air of mystery’ and is ‘now one of the most loved places on the planet, voted in as one of the New Seven Wonders of the World by popular ballot in 2007’.

Of course, Indiana Jones fans know it as the place where their whip-wrangling hero finds the Holy Grail. 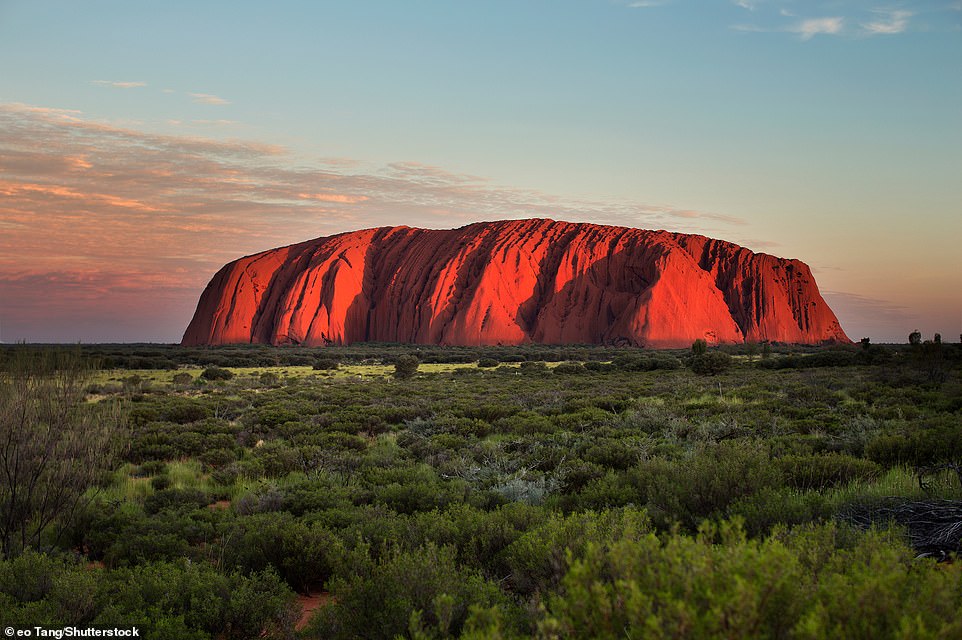 Lonely Planet says of bronze-medal winner Uluru: ‘At sunset, when its wavy walls blaze gold, Uluru looks like a ship on fire in a desert sea’ 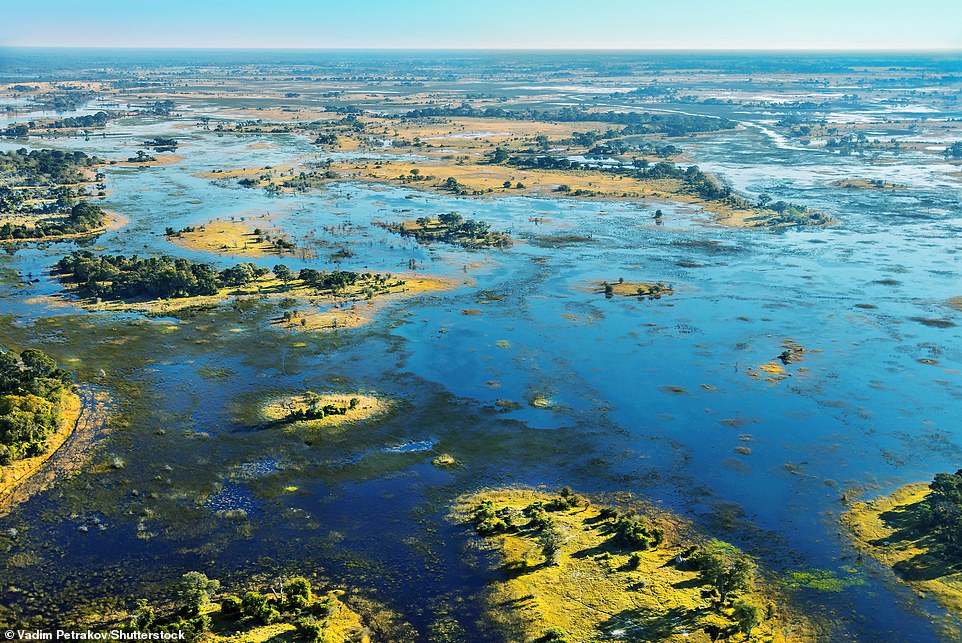 The Okavango Delta in Botswana, which just misses out on a global podium finish, is ‘one of Africa’s most compelling safari destinations’, says Lonely Planet 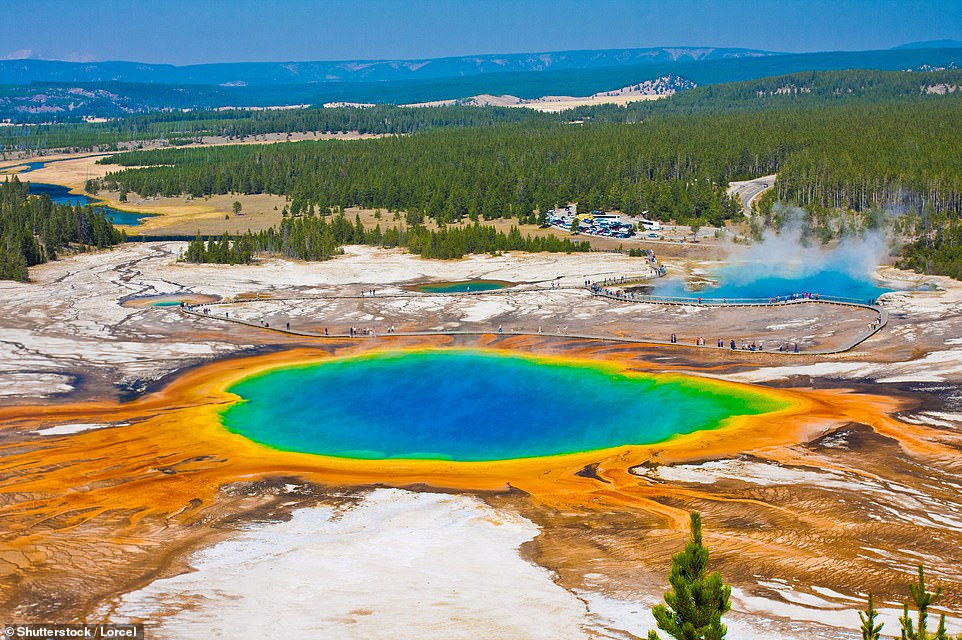 Ultimate Travel List explains that Yellowstone National Park, in at No5, is the ‘largest geothermal area in the world’ and home to North America’s answer to the big five – bison, bighorn sheep, elk, bear and wolf 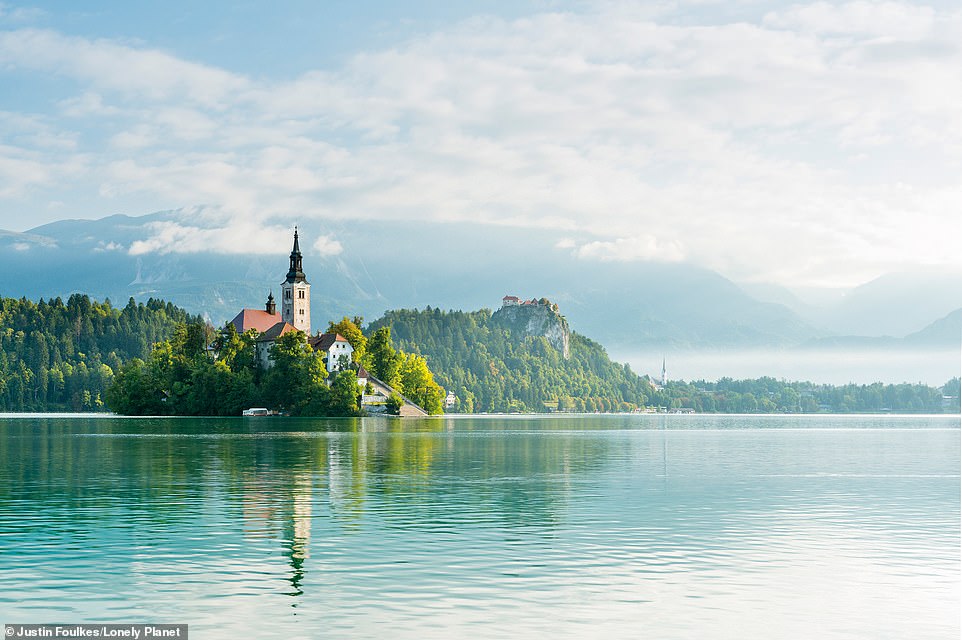 Meanwhile, the Galapagos Islands, says the tome, is the archipelago that ‘changed the course of science’, for it was here that Darwin developed his theory of evolution, and ‘the process is more obvious here than elsewhere on Earth’. The book explains that animals ‘that otherwise look alike diverge subtly from island to island, depending on their environment… cormorants can’t fly, iguanas can swim, tortoises live nearly 200 years’.

‘Visitors continue to be astonished by the archipelago’s stunning diversity,’ the book adds.

Turning to third-placed Uluru, Lonely Planet enthuses that ‘at sunset, when its wavy walls blaze gold, Uluru looks like a ship on fire in a desert sea’.

It continues: ‘Rising to 1,142ft (348m), the sandstone monolith seizes your eyes from miles away. It’s easy to see why it’s a sacred site.’ 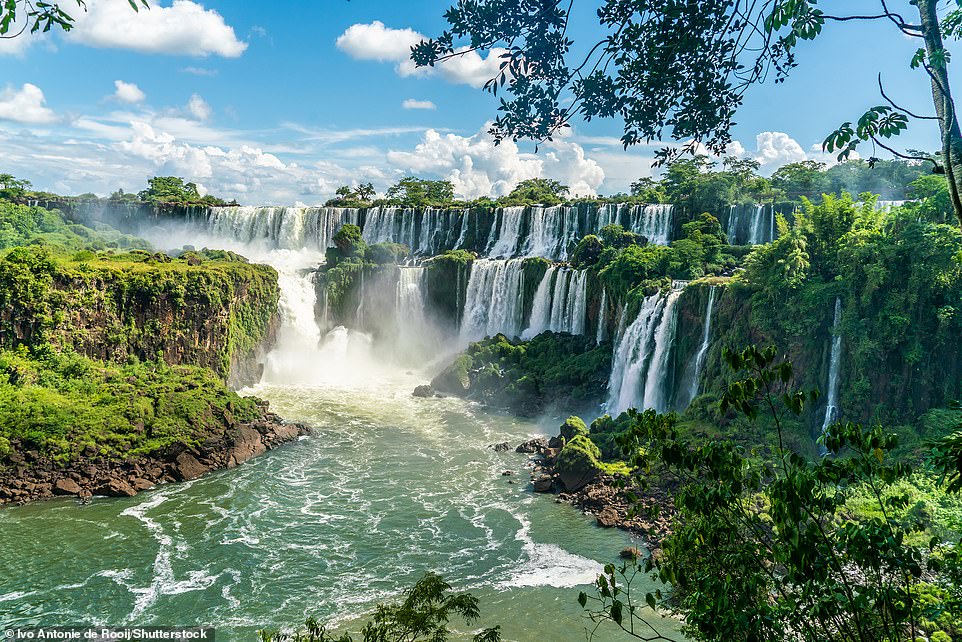 Here you’re looking at the seventh-best place on earth to visit – Iguazu Falls on the Argentina-Brazil border. Visit and marvel at the astounding power and furious force of this natural wonder, urges Lonely Planet 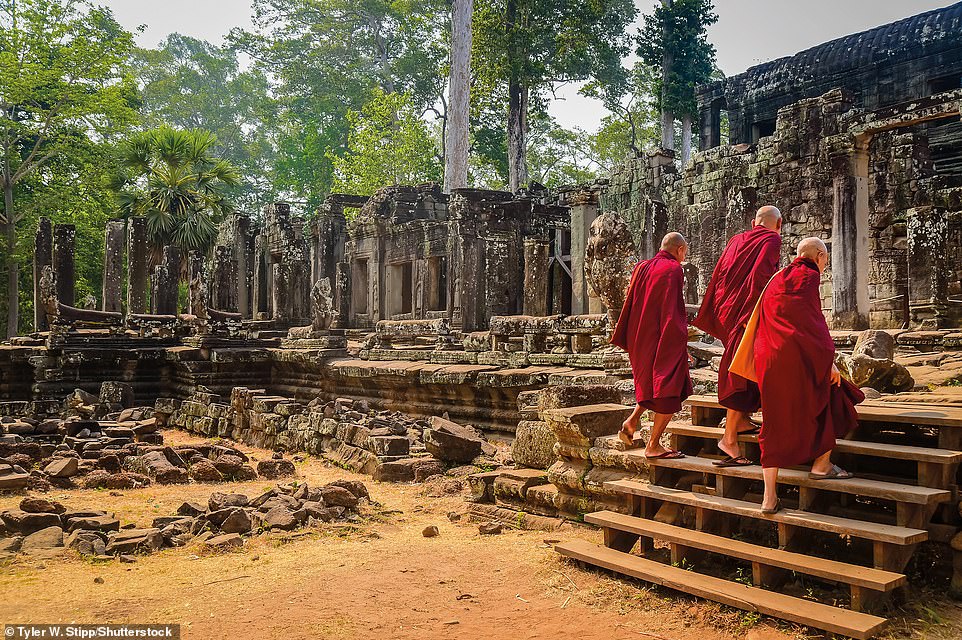 The temples of Angkor in Cambodia, No8 on Lonely Planet’s epic ranking, is a ‘sprawling monument to devotion’ 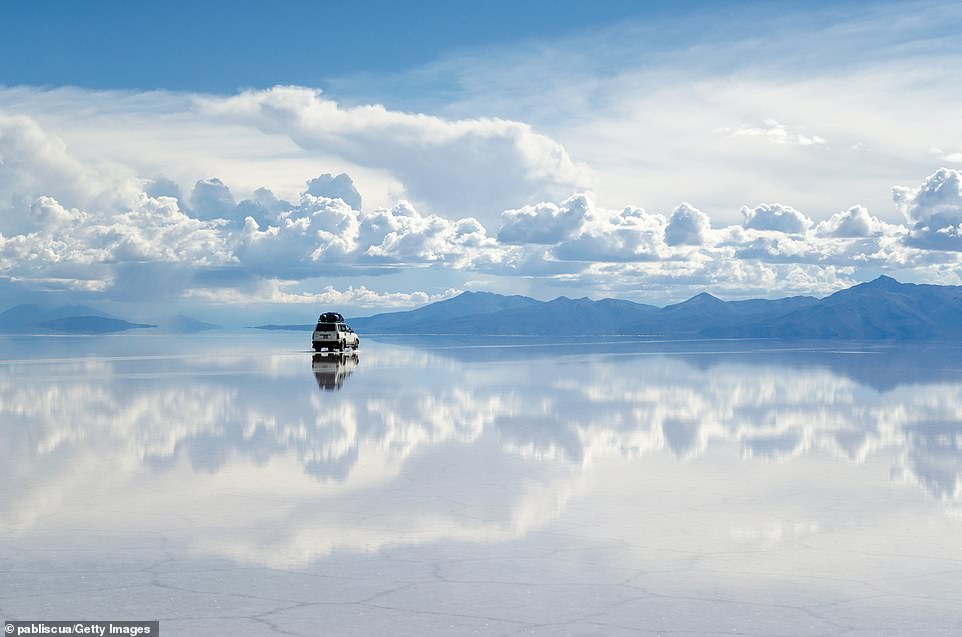 The incredible Salar de Uyuni salt flats in Bolivia comes ninth in the global ranking, drawn up by Lonely Planet’s worldwide team of travel experts and voted on by readers 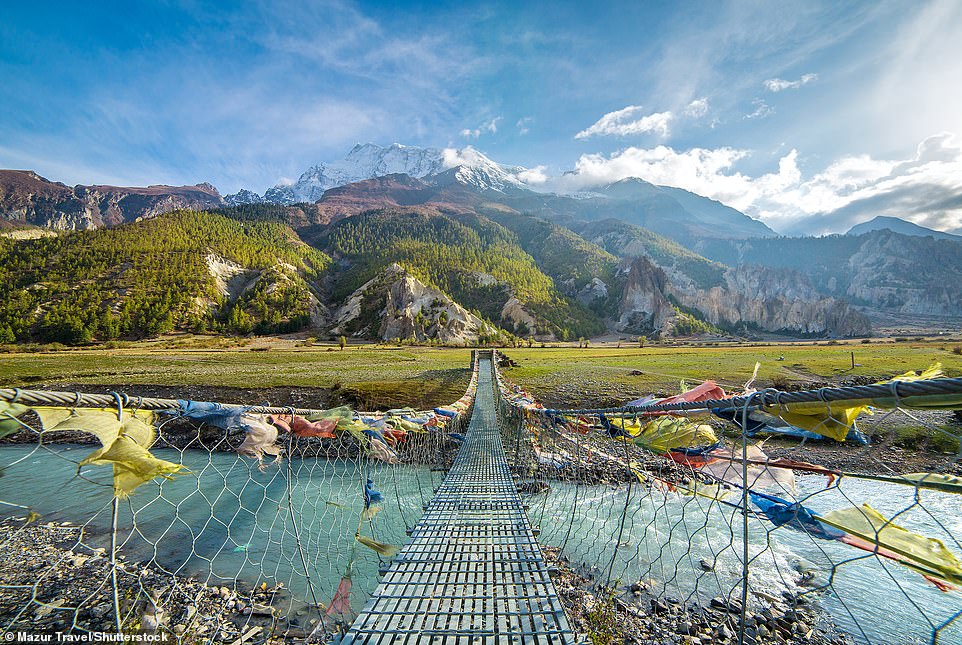 Perhaps you have fourth-place Okavango Delta in your sights for a post-pandemic perusal.

It’s a great choice – ‘one of Africa’s most compelling safari destinations’ and a ‘unique ecosystem sustaining vast quantities of wildlife’, says Lonely Planet.

And fifth-placed Yellowstone? The book explains that it’s the ‘largest geothermal area in the world’ and home to North America’s answer to the big five – bison, bighorn sheep, elk, bear and wolf. 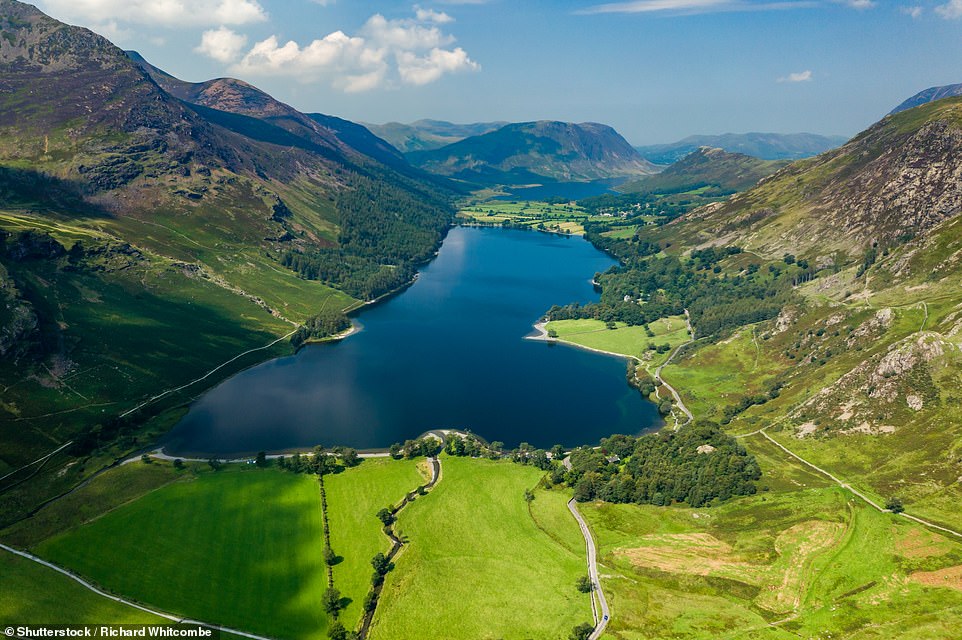 The Lake District is, according to Lonely Planet, the best place to visit in the UK. It comes 40th out of 500 globally on the Ultimate Travel List 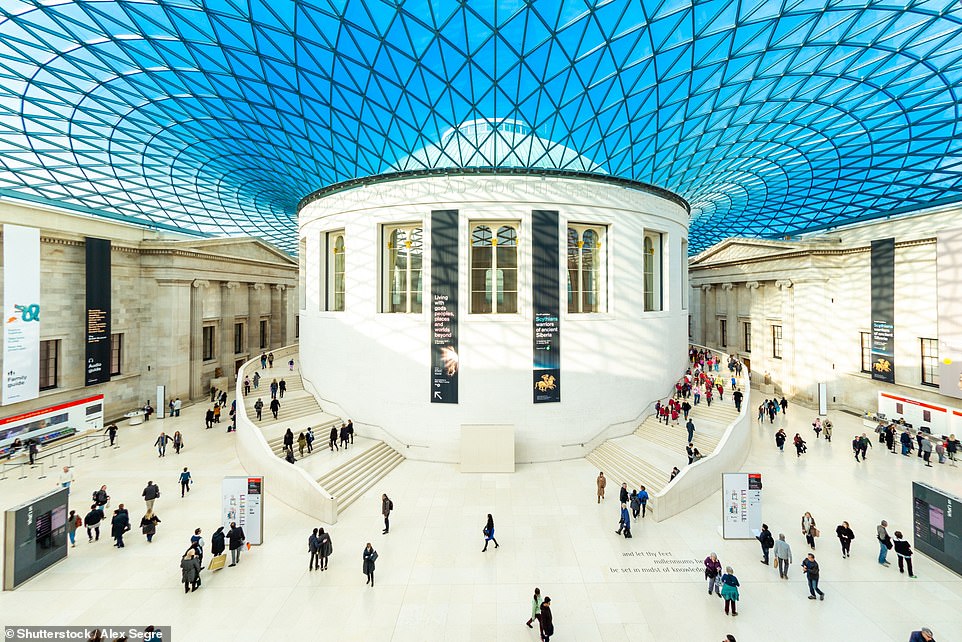 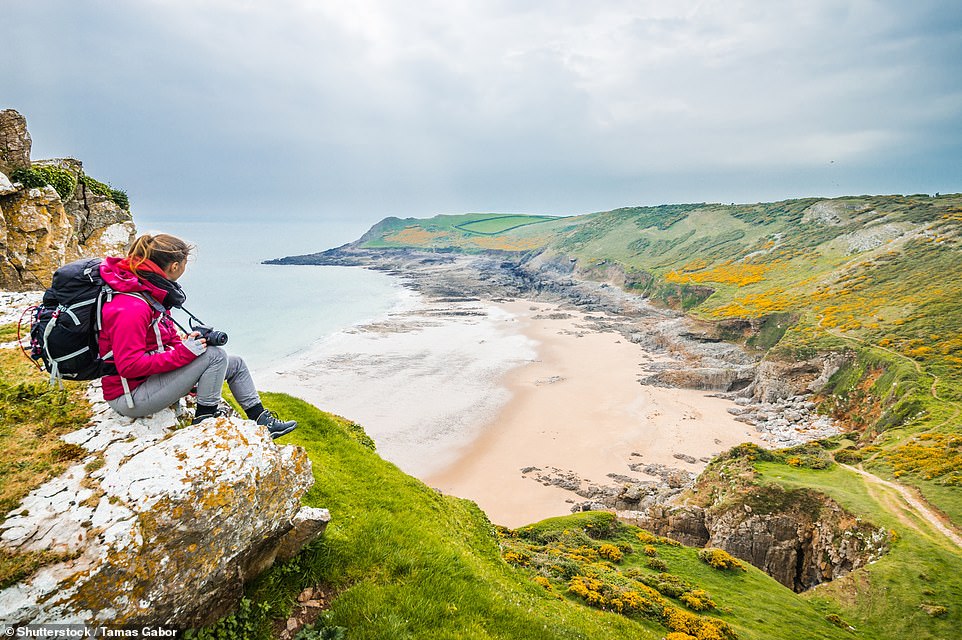 The Wales Coast Path is one of 34 entries in the Ultimate Travel List from the UK. The picture above was taken on the path near the village of Rhossili

Lonely Planet’s VP of Print Publishing, Piers Pickard, said: ‘After seven months of staying at home, now’s the perfect time to start thinking about where and how to travel once normality returns.

‘In putting together this book, we were excited by changes in both the “where” and the “how”.

‘We added 200 new entries into our list of the world’s Top 500. And we were both surprised and reassured by just how many of the Top 500 are working hard to create more sustainable visitor experiences.’

So just how did Lonely Planet rank the 500 places?

It says: ‘The longlist was compiled from all the highlights found in every Lonely Planet guidebook over the years. Each attraction and sight recommended by Lonely Planet authors was included, before being whittled down to a shortlist. Everyone in the Lonely Planet community was then asked to vote on their 20 top travel experiences. With hundreds of votes cast, we ended up with a score for each entry and a definitive ranked list of the top 500 places to see around the world.’ 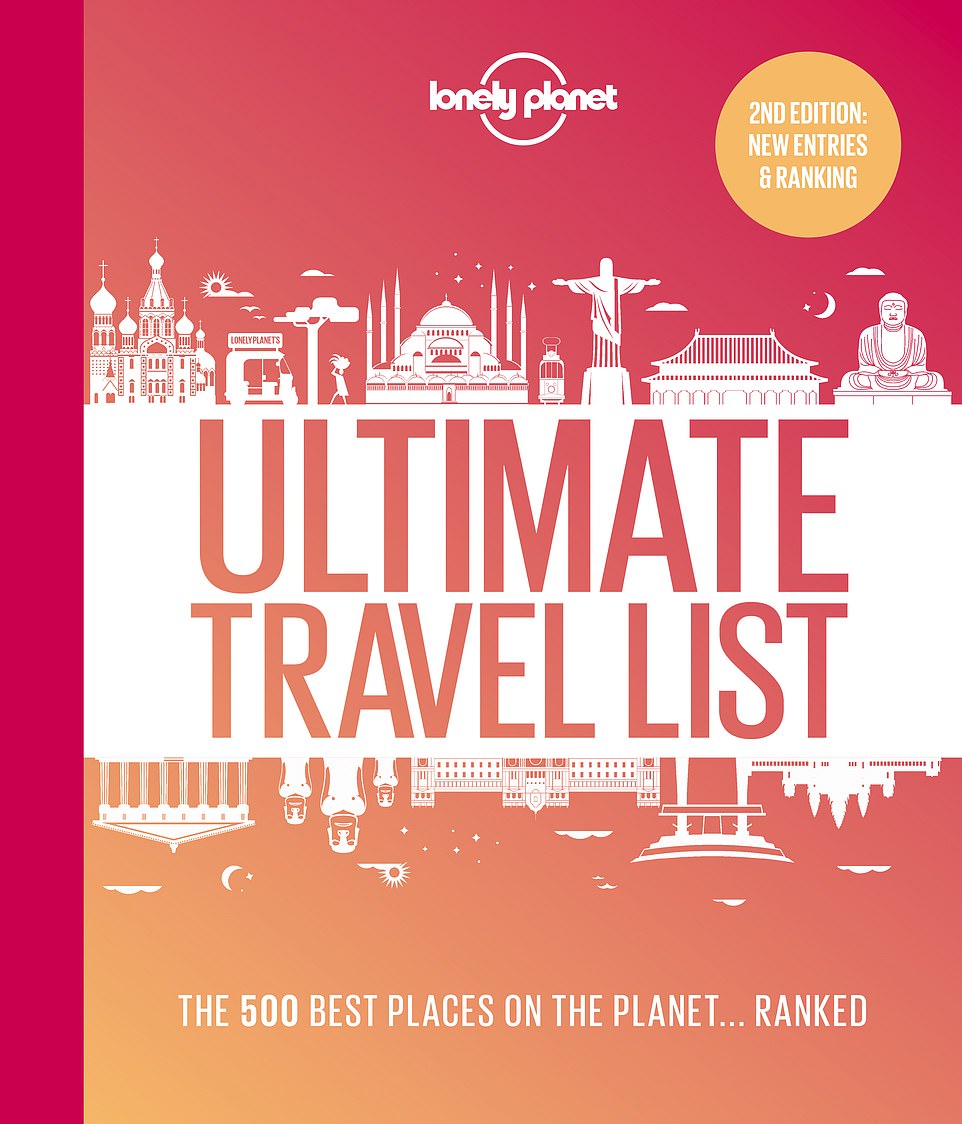 The newly released second edition of Lonely Planet’s Ultimate Travel List, a stunning coffee table book that contains the ‘definitive wish-list of the 500 most thrilling, memorable and interesting travel experiences in the world, ranked in order of brilliance’