A huge San Francisco office tower has been named the best steel building in the world for 2019.

The 1,070ft (326m) Salesforce Tower was given the gong by the Chicago-based Council On Tall Buildings And Urban Habitat (CTBUH), which hands out awards each year to the high-rises that it believes are creatively designed and enhance the cities and the lives of their inhabitants.

Scroll down to see the award-winning, neck-straining the best steel buildings from around the world that have scooped gongs.

The Salesforce Tower in San Francisco, pictured, which has been named as the best tall building in the world for 2019 by The Council On Tall Buildings And Urban Habitat (CTBUH)

Standing at an incredible 1,070 feet high, the Salesforce Tower is now the tallest building in San Francisco.

It scooped the award for the best tall building in the world because it has ‘robust seismic design’, according to the judges.

They were also impressed by how the building has established a ‘significant connection to the surrounding urban habitat’. 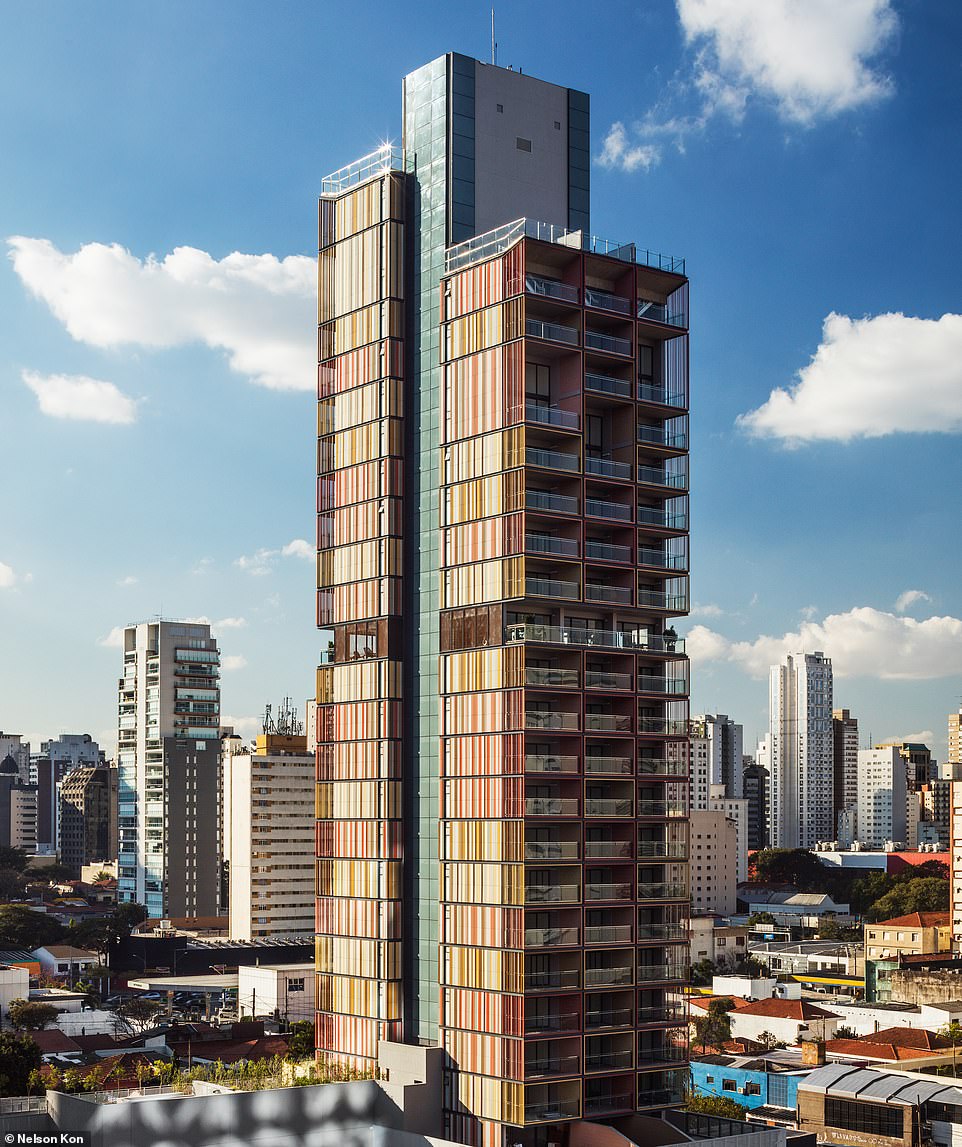 The striking Forma Itaim tower, a residential complex in São Paulo, won the award for the best tall building under 100 metres thanks to its quirky facade

The striking Forma Itaim tower in the Brazilian city of São Paulo has been built to satisfy the city’s middle-class demand for residential property.

And its quirky facade helped it to scoop the award for the best building under 100 metres.

The judges were impressed with its vibrant color-coated terracotta cladding and perforated aluminum double-skin. 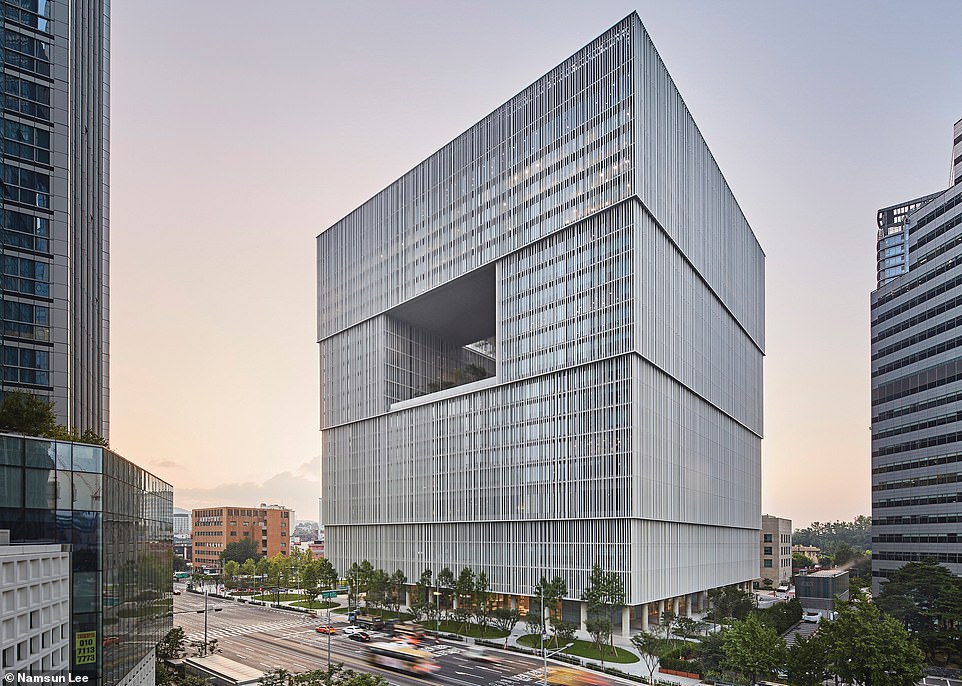 The Amorepacific Headquarters in Seoul is the winner of the best tall building between 100 and 199 metres. It houses an art museum, auditorium, library and restaurant

With a cube-design, the Amorepacific Headquarters in the South Korean capital Seoul is the home of the country’s biggest beauty company.

Judges gave it the award for best tall building between 100 and 199 metres after praising the elevation of the facade and the entrance level, which they say ‘opens up to the city and draws the public into a generous atrium’.

The building also has a mixture of public amenities, from an art museum and auditorium to a library and restaurants. 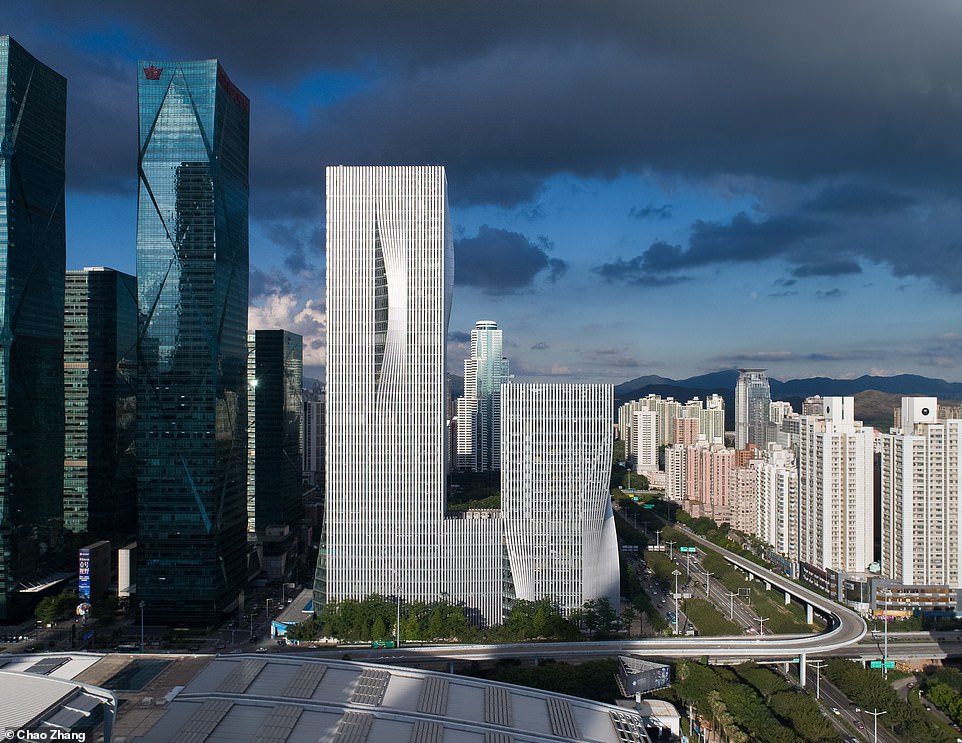 The judges were impressed with the oscillating facade of the Shenzhen Energy Headquarters building, which was named best tall building between 200 and 299 metres

Located in Shenzhen, the centre of China’s tech economy, is the striking Shenzhen Energy Headquarters building.

The building’s facade oscillates between transparency and opacity – to reduce solar gain.

The north and south towers are linked by an eight-story podium housing the main lobbies, commercial areas, conference centres and a cafeteria. 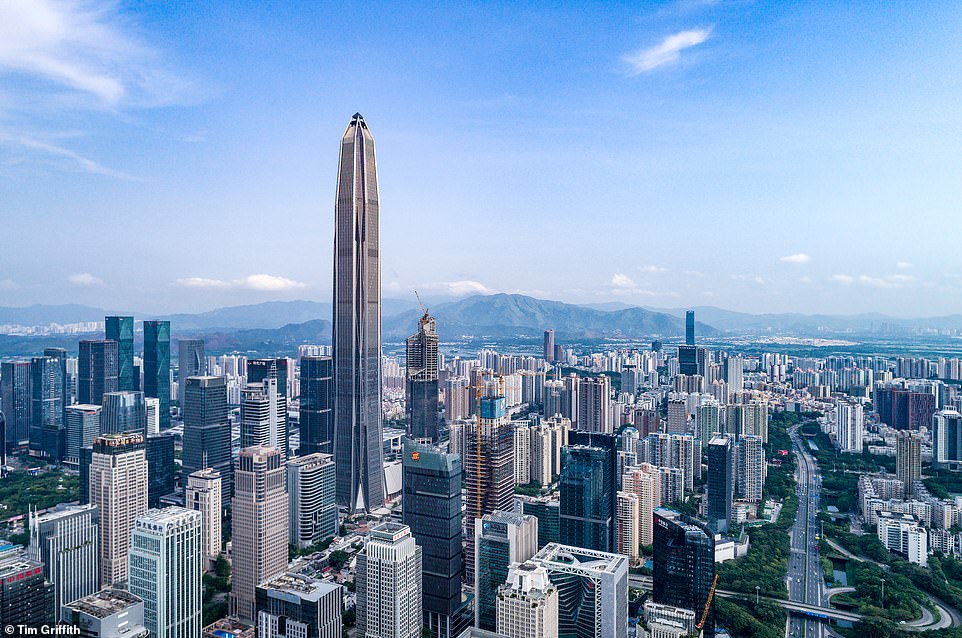 Located in Shenzhen’s new central business district, the Ping An Finance Center is the city’s tallest building at 599 metres (1,965 feet).

The building took seven years to construct and is also the second tallest building in all of China.

It has more than 100 floors of office space and a large podium with retail and conference space. The project also connects to neighbouring commercial and residential properties and public transportation. 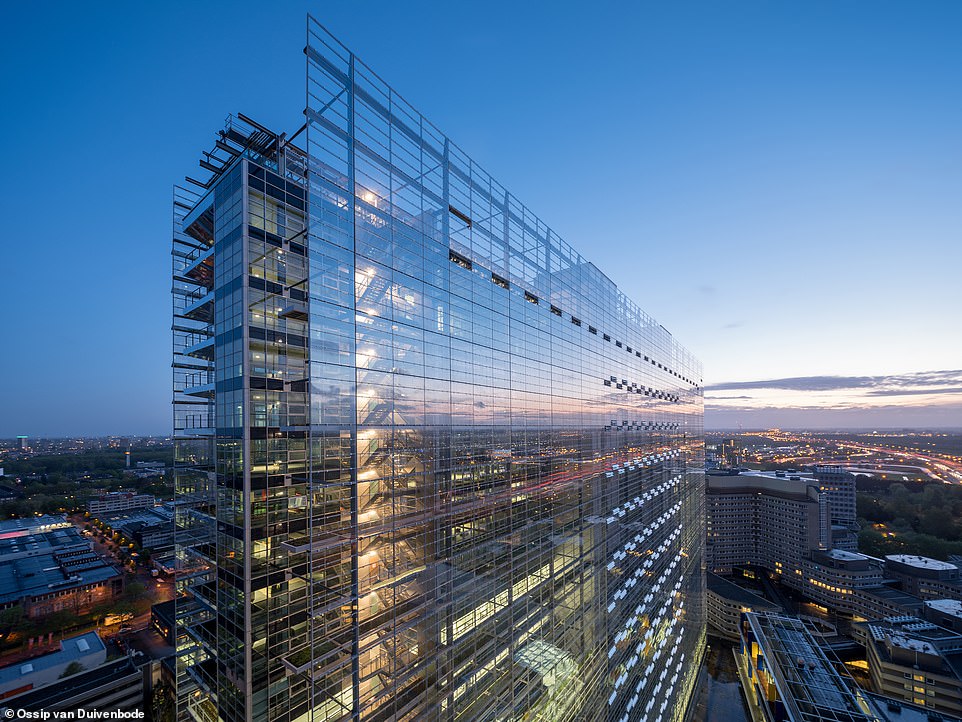 The European Patent Office in the Netherlands has a roof sky garden and a double skin facade. It is the winner of the award for the best office building

The new European Patent Office building represents the largest single investment in its 40-year history in the Netherlands.

Judges praised the array of solar panels on the roof sky garden, which provide a source of renewable energy.

It also has a double-skin façade, which houses beautiful hanging gardens. 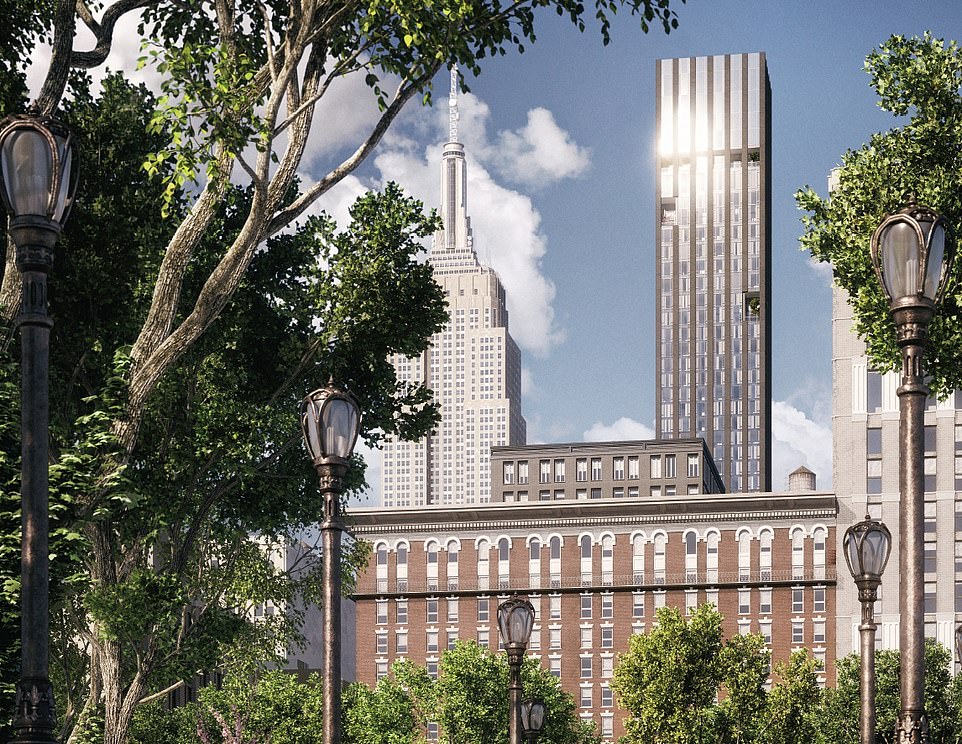 The winner of the award for the best residential building is 277 Fifth Avenue in New York, which boasts expansive views over the city

Transparency, glass, and expansive views are the defining characteristics of this residential building on New York’s famous Fifth Avenue.

And that’s why it scooped the award for the best new residential or hotel building.

Judges were impressed by how the building has been cantilevered over an existing five-story brownstone. 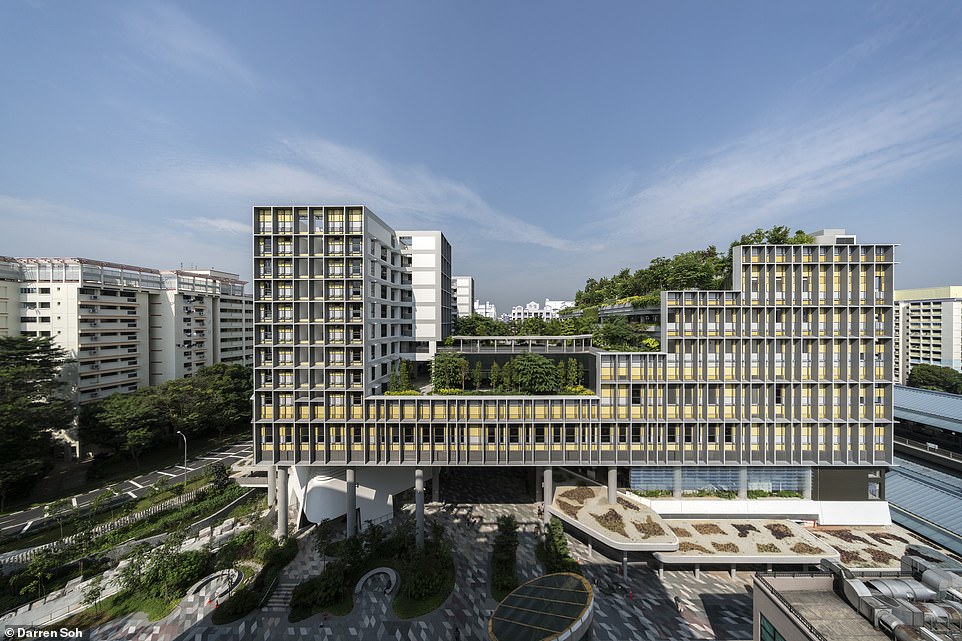 The Kampung Admiralty complex in Singapore, pictured, has been designed for retired people. It won the awards for best mixed-use building and for the best single site

It has been described as a vertical village and contains apartments for the elderly, a community plaza, a medical centre and an urban farm.

The complex won the award for the best mixed-use building, with judges praising the fact that it was designed specifically for an aging society. It was also named as being the best single site scale for seamlessly integrating public housing and commercial services. 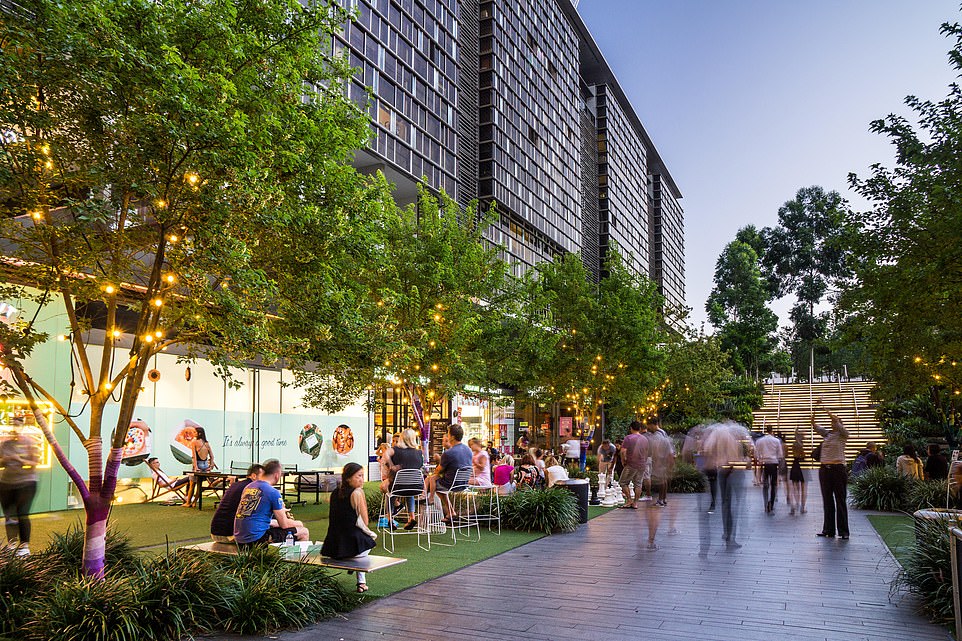 Some of the buildings that have been incorporated into the new Central Park project in Sydney. It was named as the best district/master plan scale

A former brewery site in Sydney’s Central Park has been injected with new life and transformed into a self-contained urban village.

Judges praised the project for including all of these amenities, which are gathered around an expansive park. 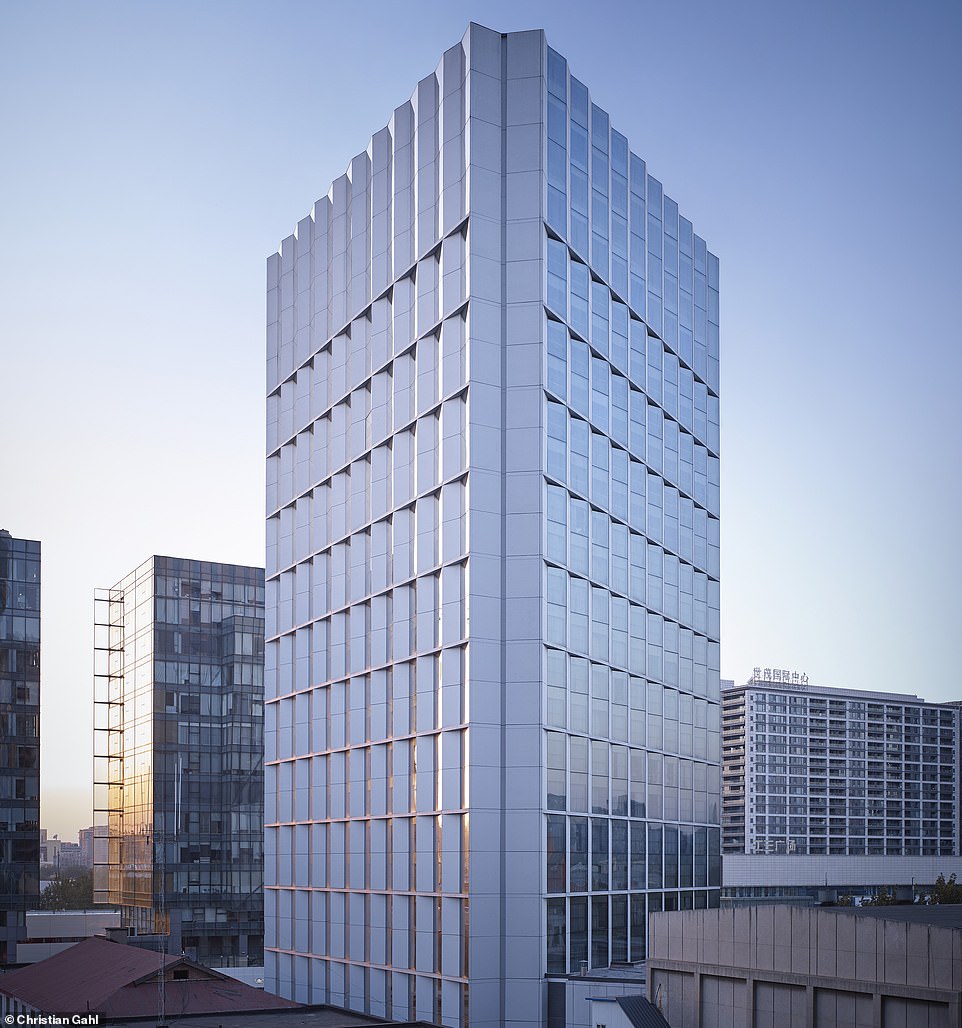 The award for the best renovation went to Beijing’s Chao Hotel. Judges were impressed with the fact that its original structure was preserved while modern design elements were introduced

The transformation of Beijing’s Chao Hotel has been named as being the best renovation project.

The judges were impressed that the original building structure was preserved while a modern glass-reinforced concrete envelope, expressed as a dynamic zig-zag, was introduced. 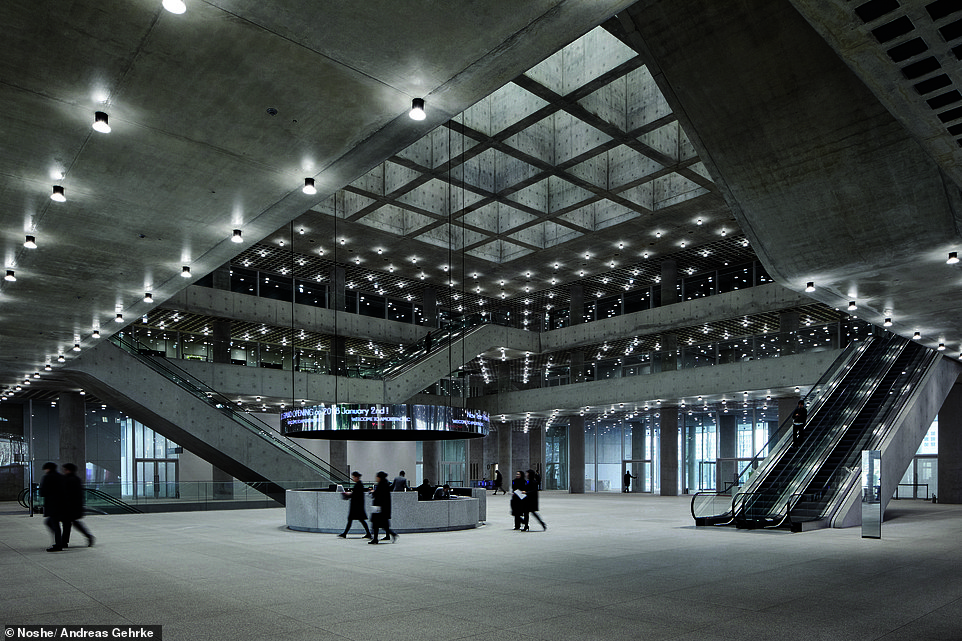 Scooping a second award – this time for its interior space – is the Amorepacific Headquarters in Seoul.

That’s because its central atrium is made of clean concrete, which the judges say conveys a sense of refinement.

It is also praised for its dramatic punched openings that create sky gardens throughout, and other amenities including a library and a public art museum that further draw in foot traffic. 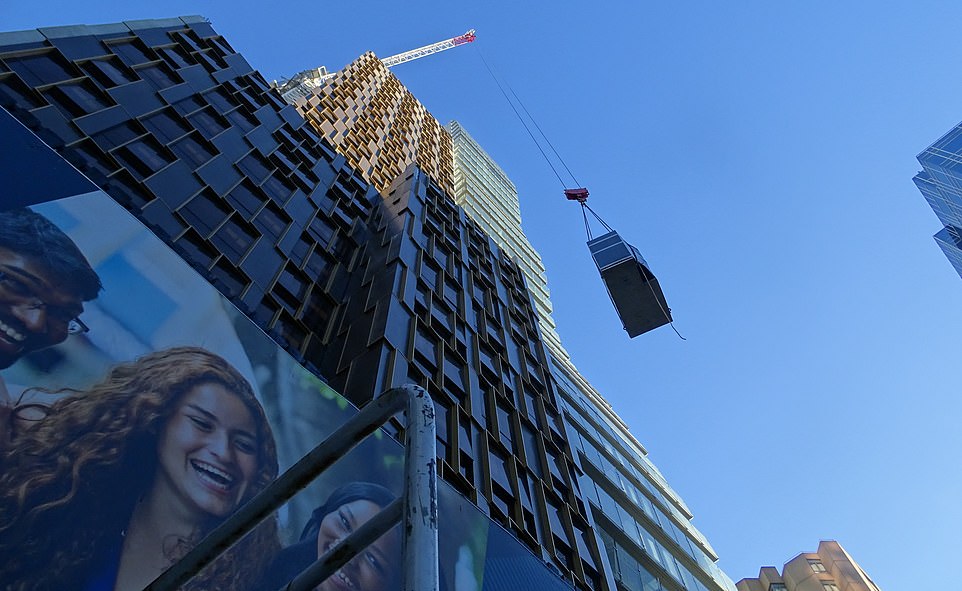 Atira La Trobe Street is made of prefabricated, interchangeable components that ‘lock’ into place. The judges noted that this offers exceptional stability

Atira La Trobe Street is a student accommodation complex in Melbourne that has scooped the construction award.

The building is made of prefabricated, interchangeable components that make for fast and efficient construction and ‘lock’ into place once assembled.

Judges noted that this offers exceptional structural stability and ease of fit-out during the construction process. 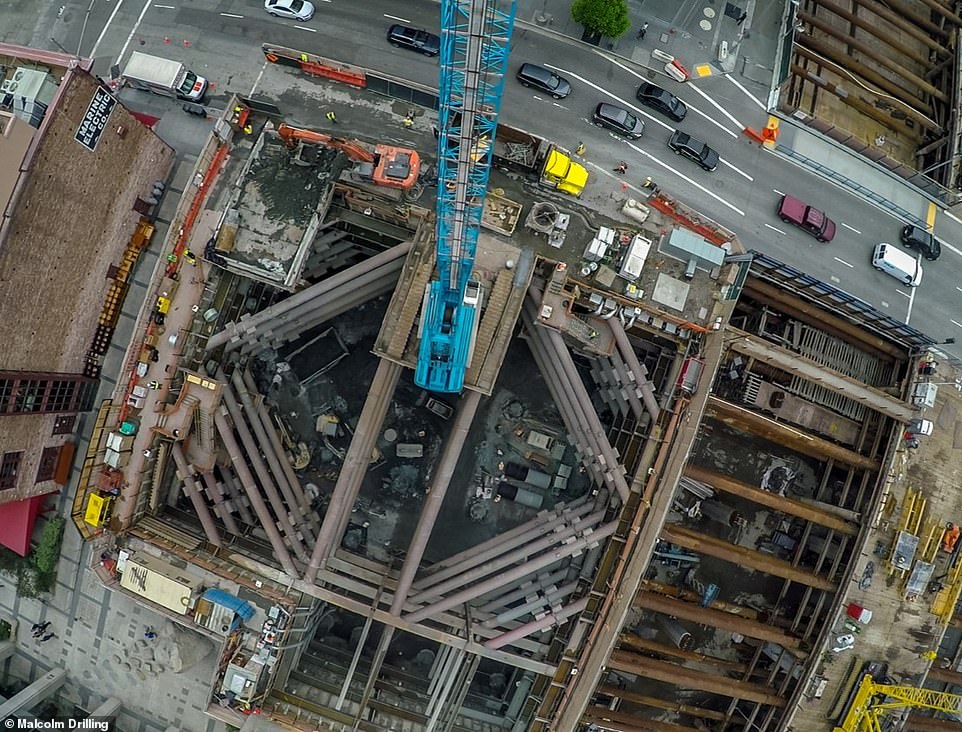 This building can immediately restore functionality in the wake of a massive earthquake, thanks to the seismic design process used to create it

Home to luxury condos overlooking the Golden Gate Bridge, the 181 Fremont building was named as being the best for structural and geotechnical engineering.

The property was creating using an innovative seismic design process, including a lateral force-resisting system, which means the tower can immediately restore functionality in the wake of a massive earthquake.

Judges praised the building’s engineers for meeting the challenge of a highly seismic and complex geologic environment head-on. Forty-two shafts were drilled more than 75 meters into bedrock, helping to reduce the amount of structural steel needed for this tower to resist earthquakes by 25 per cent. 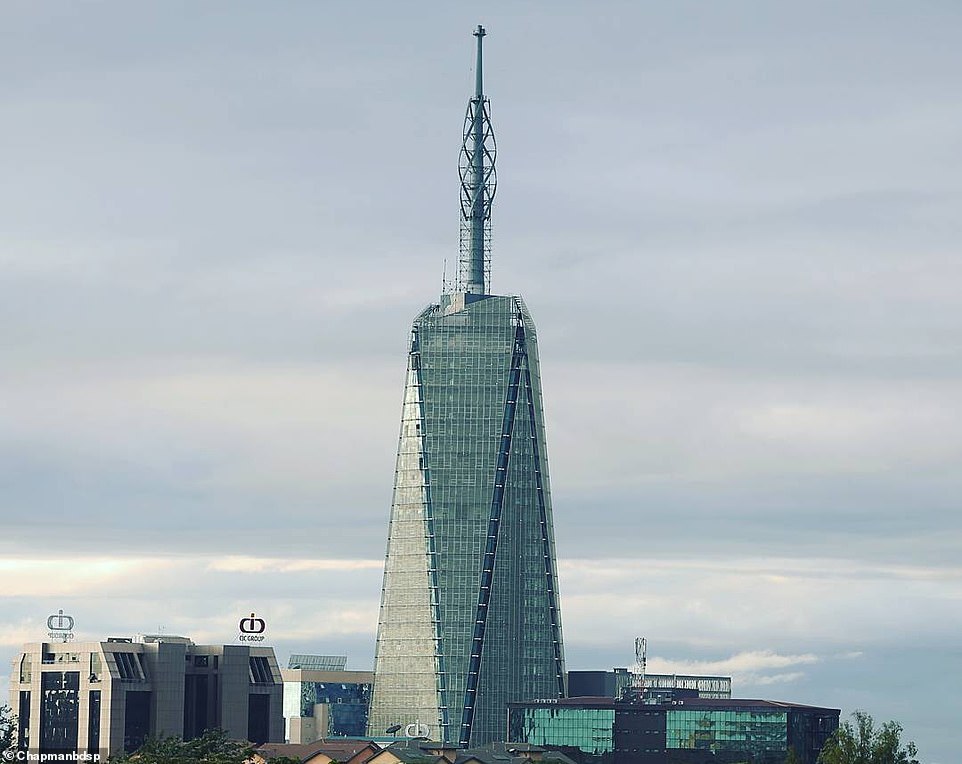 The Britam Tower, an office block in Nairobi, which is the tallest building in Kenya, has been named as having the best mechanical, electrical and plumbing engineering.

The judges said: ‘The veil façade solution – consisting of 50-millimeter-square ceramic rods in front of a full-height glass curtain wall with “selective” glass – lets in significantly more light than heat.’ 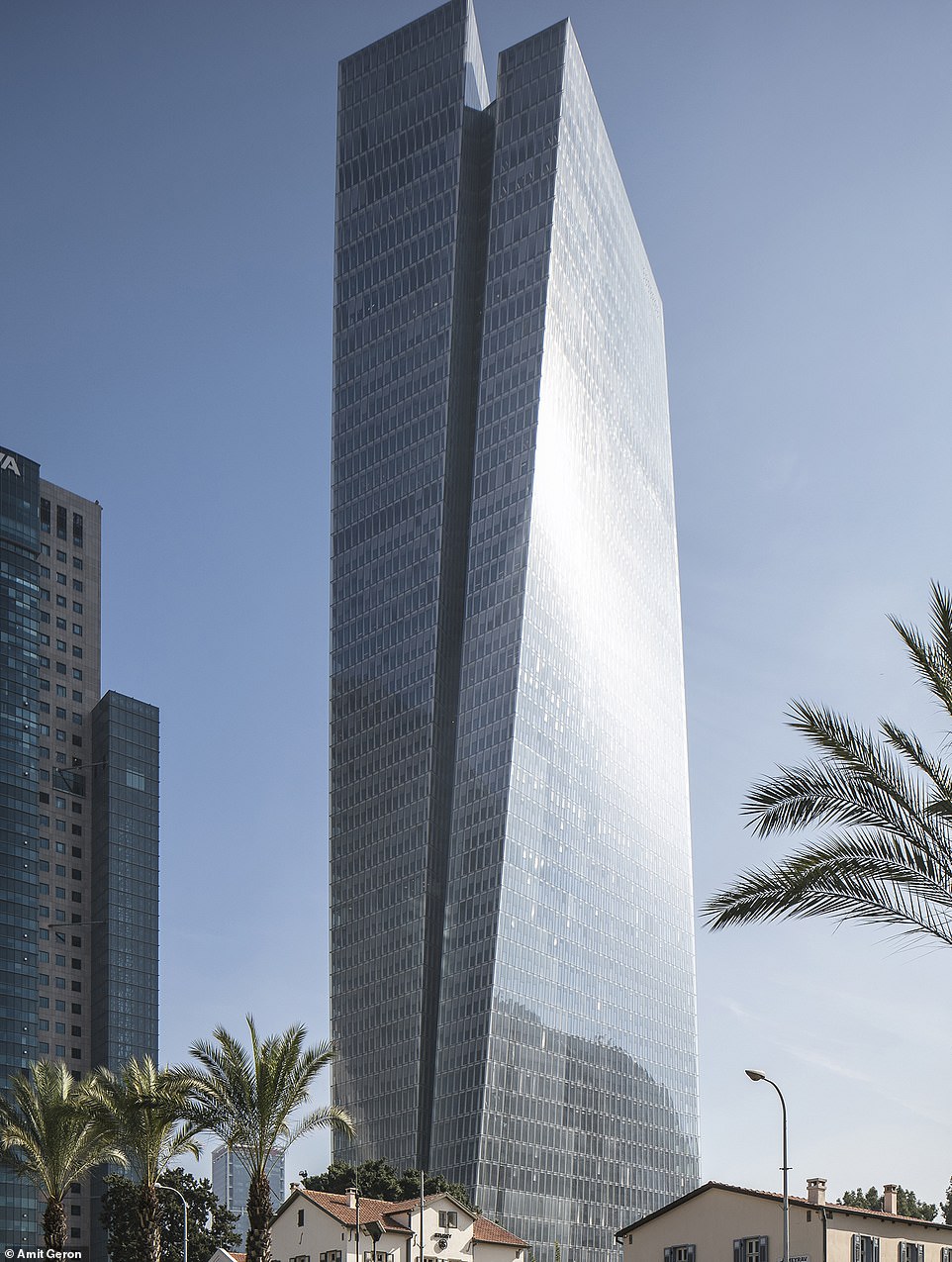 The Azirieli Sarona Tower saves 27.5 per cent more energy than the baseline requirement

The Azirieli Sarona Tower is the tallest building in Israel at 238 metres (780ft) and the winner of the award for best façade engineering.

Judges were impressed by the juxtaposition of the two layers of a double-skin façade that creates a dramatic façade design.

They said: ‘Its precise engineering strategy, intended to cut blazing heat, saves 27.5 per cent more energy than the baseline requirement.’ 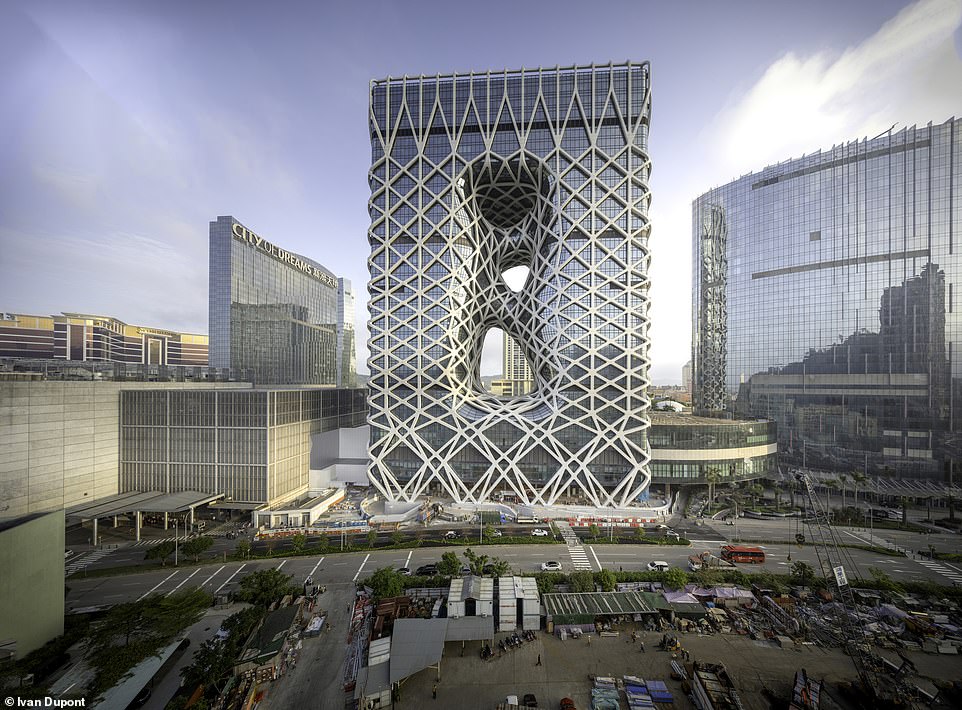 Dominating the Macau skyline, the Morpheus building, which houses a hotel, scooped the award for the best fire and risk engineering.

To ensure effective fire suppression, four layers of sprinkler lines were installed on different levels of its spectacular atrium.

The judges remarked: ‘With a twisting geometric façade punctuated by three holes, this hotel delivered a fire engineering challenge.’ 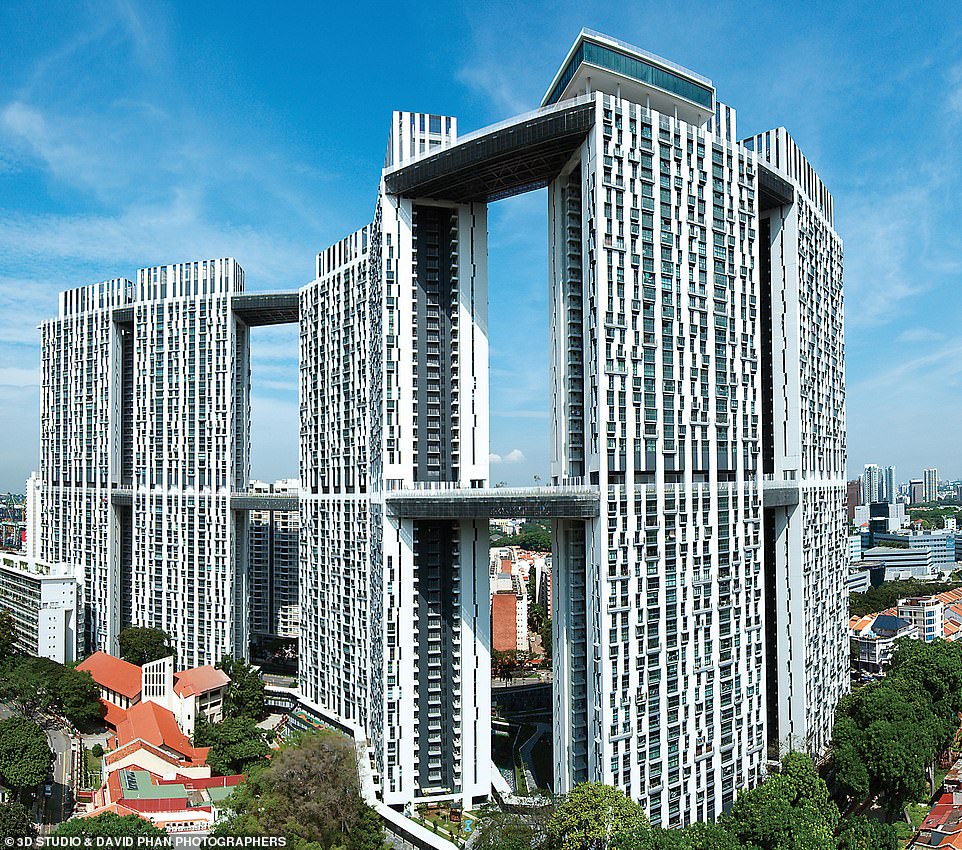 The awards also recognise tall buildings that are still impressive, long after being completed.

Winning the award this year is the Pinnacle@Duxton in Singapore, a residential complex that opened in 2010 and has the world’s two longest sky gardens. Both are 500 metres in length.

The judges said that the 12 sky gardens at this seven-tower complex function as an extension of the living environment for residents, forming almost one hectare of new land – in the sky.

They added that the orientation of the towers creates urban windows that frame the city skyline, eliminating overlooking between units and optimising views.