The scenario is pure James Bond. On a bland industrial park outside Oxford, scientists working for a multi-national corporation have discovered a way to ‘speed up time’ to produce a synthetic version of one of our planet’s most sought-after natural treasures: diamonds.

A process that in nature can take up to three-and-a-half billion years to create the finest stones deep within the Earth’s crust has been reduced to just three weeks.

And so authentic are the lab-created gems — which sell for up to 85 per cent less than the real thing — that experts are hard pushed to tell the difference, leading to fears of a dramatic fall in the value of mined diamonds.

It may sound an incredible yarn, but this week De Beers, the London-based mining group that controls a third of the £60 billion global diamond market, announced it was starting serious synthetic gem production aimed at the mass market.

The move has astonished the diamond-dealing world, as De Beers has long been a critic of man-made gems. Indeed, its executives had previously vowed never to sell them.

Just three years ago, the company’s head of research said: ‘We would not do anything that would cannibalise the industry.’ De Beers even invested millions in developing machines to identify ‘rogue’ lab-grown sparklers.

Other companies were less sniffy, however, investing in the technology and threatening to steal a march as the provenance of real diamonds has become a hot political issue.

Three years ago, Leonardo DiCaprio, who had starred in the 2006 film Blood Diamond — which highlighted the illicit trade in diamonds mined by workers in war zones and sold to buy weapons and the service of mercenaries — invested an undisclosed sum in one of the largest players in the synthetic market, Diamond Foundry.

Abuses in the diamond trade were supposed to have been stopped by the UN-backed Kimberley Process Certification Scheme, set up in 2000 to certify that traded diamonds were ‘conflict-free’.

However, the scheme has been blighted by the resignations of members who say it is too weak. (Zimbabwe, for example, was allowed to continue trading diamonds despite the Mugabe government’s involvement in massacring gem miners.)

Although some fear De Beers’s move could devastate its core mining business by knocking the floor out of diamond prices, its executives have come round to the view that people are increasingly happy to buy diamonds for their sparkle alone, rather than their high value and exclusivity.

And from a PR point of view, it plays to the public’s growing concern about the ethics of the business — and may well empty the pockets of dictators, terrorists and shady middlemen who still make billions from the trade in illegal gems.

The science behind the man-made gems set to revolutionise the market is far from new. It was in the early Fifties that technicians at the American industrial giant General Electric took a tiny fragment of diamond (called a ‘seed’) and subjected it to intense pressure and heat (4,000c) in a hydraulic press, while carbon-containing gas was passed over it. 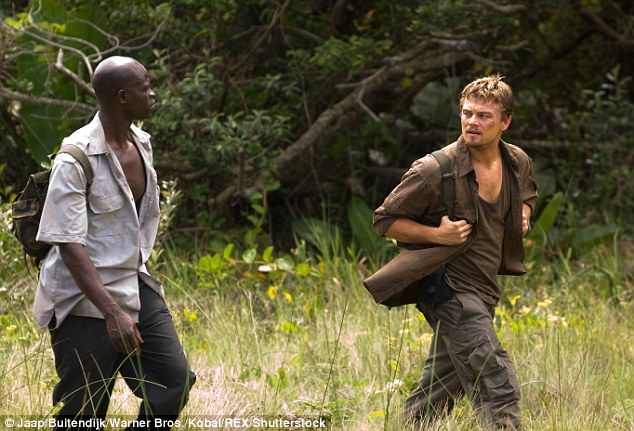 Djimon Hounsou (left) and Leonardo DiCaprio (right), starred in the 2006 film Blood Diamond — which highlighted the illicit trade in diamonds mined by workers in war zones

This mimicked the conditions that create diamonds over millions of years underground: carbon atoms in the gas stick to the seed one by one, building up the intricate carbon lattice structure of a diamond at a rate of roughly 0.0002 of an inch per hour.

The end result, a chunky cube of diamond, can be cut and polished into the traditional shape. Manufactured diamonds produced in this way have sold for a discount of 20-40 per cent on the real thing.

De Beers is well versed in the technology, as the world’s leading supplier of synthetic industrial diamonds through its UK-based subsidiary Element Six.

As well as this high-temperature technique (which also requires pressure equivalent to placing the 7,300-ton Eiffel Tower on a single can of Coke), De Beers has been developing a cheaper synthetic diamond-making process called chemical vapour deposition.

This involves pumping carbon-containing gases into a low- pressure vacuum around the diamond seed, again building up in layers to create a single stone.

In the past decade, the technologies involved have advanced so much that synthetic diamonds are now much cheaper to produce.

What’s more, their quality is such that it is no longer possible to tell the difference between natural and lab-produced gems with the human eye. Even professionals, using magnifying glasses and microscopes, find it difficult.

This was amply demonstrated six years ago when 600 lab-grown diamonds were found in a collection of 1,000 gems. The synthetic stones even included intentionally created impurities to make them look more natural.

The only people who could detect the difference were experts at the International Gemological Institute in Antwerp.

So if the synthetic versions are that good, should buyers care that they are not ‘real’?

Well, there is always the small matter of value. One of the biggest fears of traders, collectors and owners of diamond jewellery is that a flood of comparatively cheap, lab-made diamonds will result in a dramatic devaluation of mined diamonds.

But in fact, contrary to Marilyn Monroe’s claim, diamonds were never really a girl’s best friend in terms of investment or resale.

While large rare diamonds may command a premium, the small ones found in rings, bracelets, pendants and earrings are too common to appreciate in value. They seldom even keep the price paid for them at a jeweller’s.

But clearly there will be an impact, not least because synthetic gems are unlikely to have any resale value in a world that could be awash with them.

There is no question that this is a canny move by De Beers. The cost of getting natural diamonds out of the ground is continually growing, which cuts both production levels and profits. 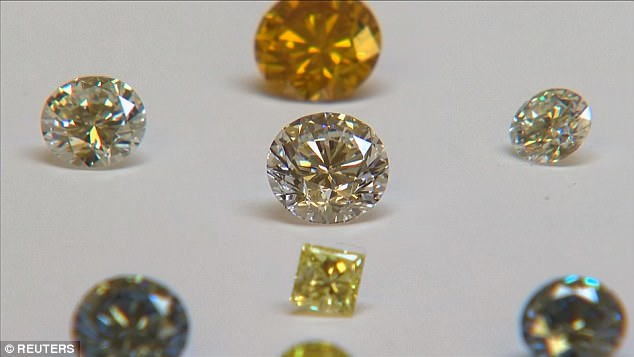 In addition to its site in Didcot, Oxfordshire, the company will invest more than £70 million in a synthetic diamond production site in the U.S.

But De Beers is determined to protect its core business, so it is marketing its new synthetics as a fashionable, fun, comparatively cheap alternative to ‘serious’ mined diamonds of the calibre required for engagement rings, regal tiaras and collector’s items, for which it hopes there will always be a demand.

The new Lightbox range will include synthetic diamonds from £150 for a quarter-carat stone to £600 for a one-carat stone.

‘We are not pretending they are unique or rare,’ says De Beers’s chief financial officer, Nimesh Patel. ‘[They are] not for those great moments in life when you want something inherently precious.’

Significantly, De Beers is employing another new technology developed in Oxfordshire. Opsydia, a firm created by Oxford University, can label De Beers’s synthetic gems with tiny marks, less than one-fiftieth the width of a human hair and invisible to the naked eye. Each is inscribed by laser below a diamond’s surface so it can’t be polished away.

So there will be a way to tell if your diamond is for ever or the result of three weeks’ nurturing in a lab. But you’ll need a very strong magnifying glass to find out.