From a glass home sandwiched in between a rail track and a busy road to a lakefront home built to house six classic cars, these properties prove that extraordinary architecture is possible when money is no object.

And the lucky homeowners who get to live in these luxury houses have given TV viewers the chance to peak at how the wealthy from around the world live.

Their stops include a visit to the Flex House, a striking glass home that stands out amongst the traditional Swiss architecture; a modern ski chalet that needed its timber flown in by helicopter; a modern home with a nod to Italian design and a sprawling abode with breathtaking views of mountains and lakes.

Here, FEMAIL offers a sneak peek inside each of the homes… 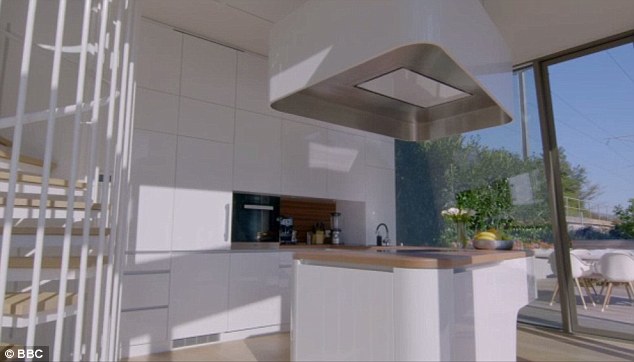 The home is S-shaped and curves around, and features white wooden interiors specially made for the homeowner 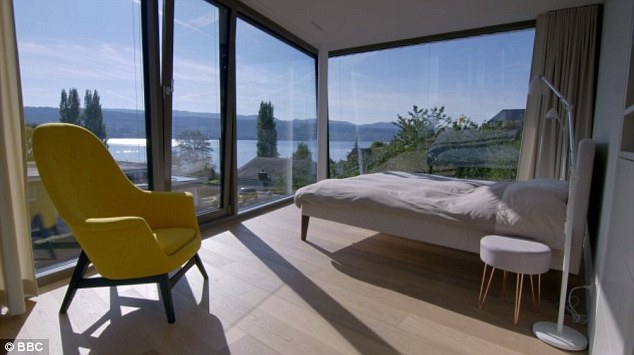 No privacy: The home has few curtains and blinds, offering passersby a view into its striking interior

While Swiss homes are known for big shutters and even bigger roofs, the Flex House breaks with both tradition and the landscape beside Lake Zurich in Feldmeilen, north Switzerland.

The difference made by the house from Evolution Design was so striking that Taylor described it as an ‘anarchic’ architectural move.

The glass home sits between a busy road and a railway line, offering passengers and passersby a peak inside the striking three floor property.

Every wall is made of glass and the home has few curtains or blinds, even in the bathroom, which is protected by a translucent white sheet for privacy. 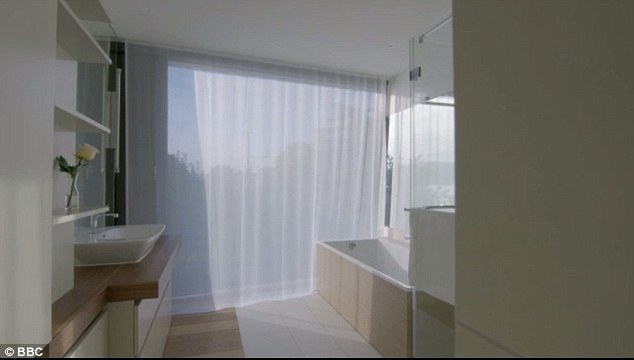 Open plan bathroom: The bathroom has just a translucent white blind to protect the visitor’s privacy 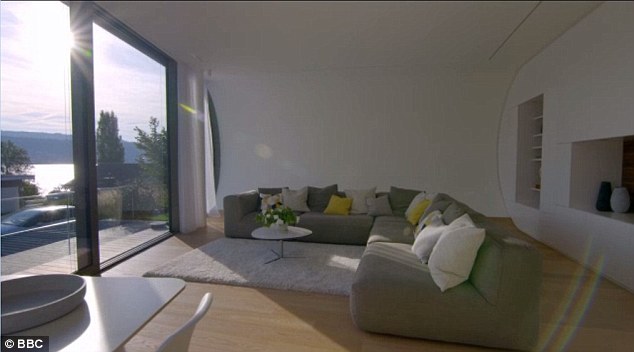 The S-shaped house is made up of curves, as the floor curves into the walls, which curve into the ceiling.

On the top floor is the master bedroom with a terrace either side, offering 180 degree views of the outstanding natural beauty of the mountains and lake.

Few of the glass windows open and so the house has a ventilation system in the walls and floor to keep it cool in the summer.

Usually homes have to be at least three metres away from the railway line but architect Stefan and his wife Ana were given permission to build it just one and a half metres away. 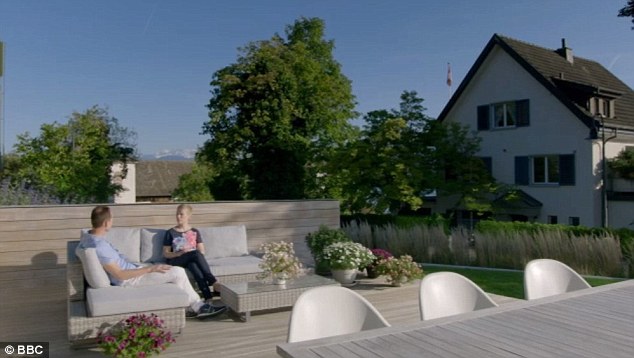 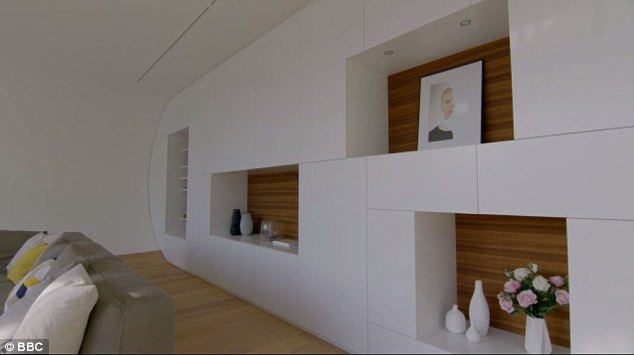 The S-shape of the building means the walls and floors curve into each other, giving it its quirky interior design

Local authorities set up a laser system that stopped construction crews from building outside the boundaries, and if they stepped too far alarms would go off.

However, Stefan believes the property was worth all the effort that went into creating it.

He said: ‘It’s a lot about movement, you’ve got a train close by in front of us, the road and the lake, it’s all moving around us.

‘The idea was to make a building that doesn’t look so permanently anchored into the ground but actually much more gentle and has a flow in itself. 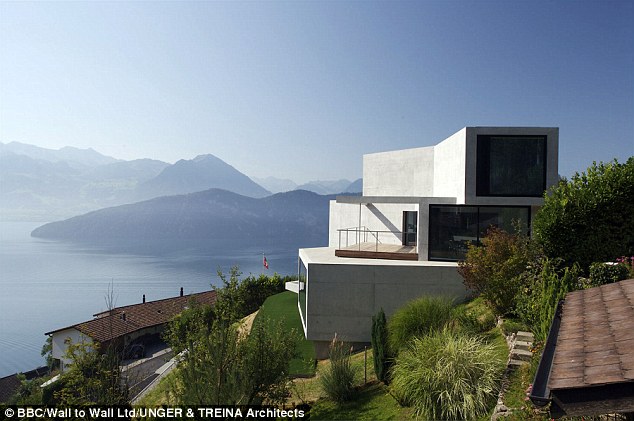 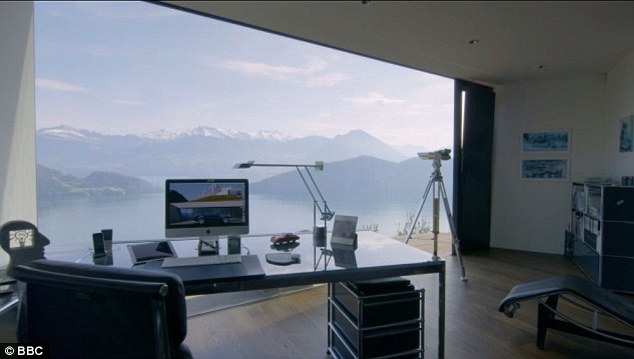 Room with a view: The study has a view of the Alps thanks to an enormous window 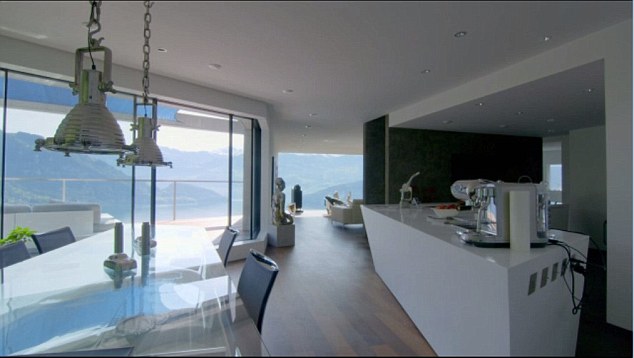 Stylish: The property has an open plan kitchen and dining area with similarly stunning views

The bold design of the lakefront Villa Am See looks straight out of a James Bond film thanks to the six Porsches hidden in the garage below the three concrete blocks that made up the very modern living quarters.

The home overlooks Lake Lucerne in the Alps and the huge glass fronts of the blocks offer incredible panoramic views.

Visitors must use a lift to travel from the garage to the living space, where they will find a bedroom with access to the swimming pool stylishly cantilevered over the cliff side.

On the next floor is the open plan kitchen and dining area, with a guest room, office and cinema room on the top floor. 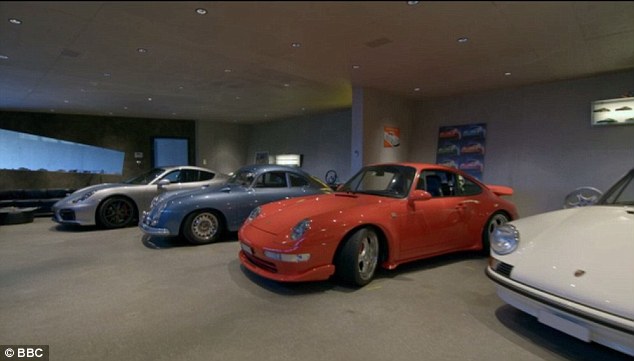 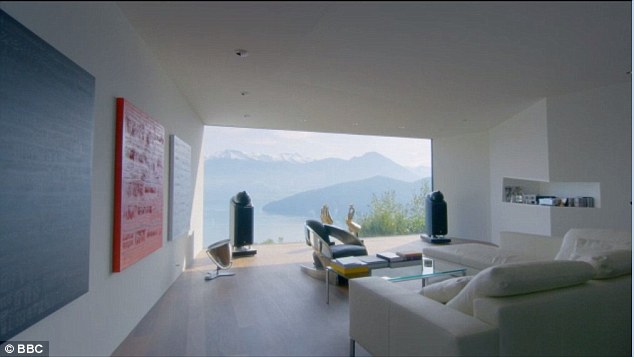 The living room has a light decor and atmosphere, offering somewhere to relax and take in the views

The architect and homeowner Adi from Unger & Treina had worked as a financial advisor but retrained as a mechanic so he could work with cars.

The property was first meant to be a garage for his collection of Porsche’s but he decided to use the land as a home too.

He said: ‘I was surprised when I looked at the proposal in the beginning, I was almost shocked. I thought ”This is almost too radical”.

‘I spoke to a couple of friends and showed it to to other people and they said ”That’s the house you need, that’s your house.”’ 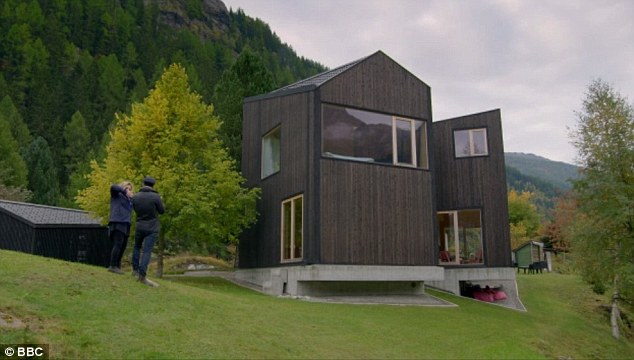 A twist on a classic: The Maison Aux Jeaurs was designed to look like a modern Swiss ski chalet 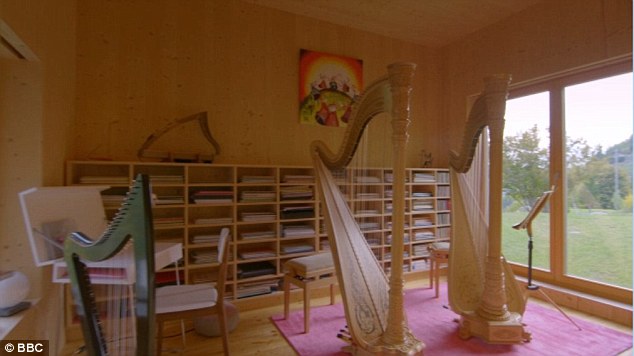 Peaceful: The property has a music room for harpist Seline that looks out over the mountains 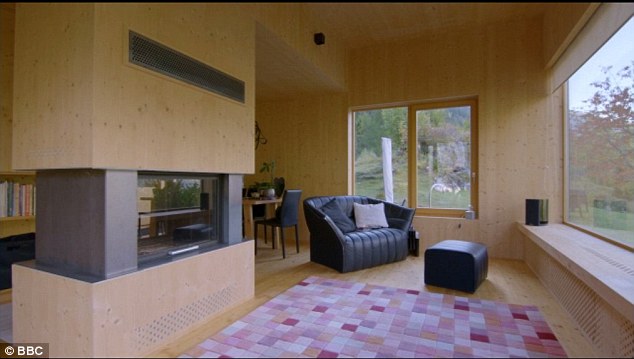 Traditional: The home has wooden interiors to look like a typical chalet found in the area

The Maison Aux Jeaurs is a traditional Swiss ski chalet with a twist.

The timber clad building has been constructed into a V-shape that splits the house into two sections.

Looking out from the living room window gives a view into the nearby music room, where the homeowner Olivier likes to enjoy his harpist wife Seline playing her instrument while looking out over the mountains.

The building overhangs on a small wooden platform, which Olivier says gives the building a feeling that it is floating. 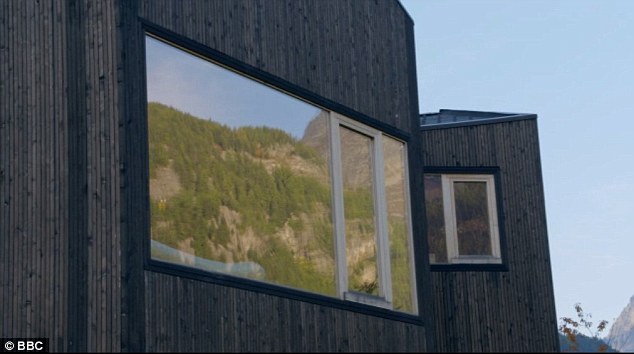 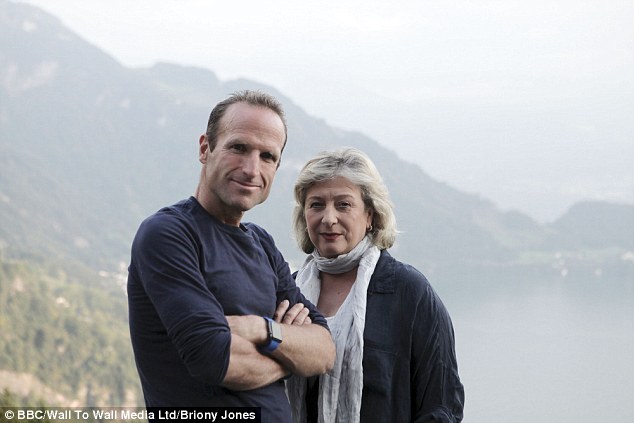 It has three bedrooms and an office, with the wooden interiors keeping with the traditional decor of chalets.

The mirrored windows offer privacy for the residents but also provide stunning views of their surroundings.

The property sits so high in the mountains that helicopters had to deliver 40 pieces of timber individually to be constructed on site, which host Caroline compared to a ‘wooden puzzle’. 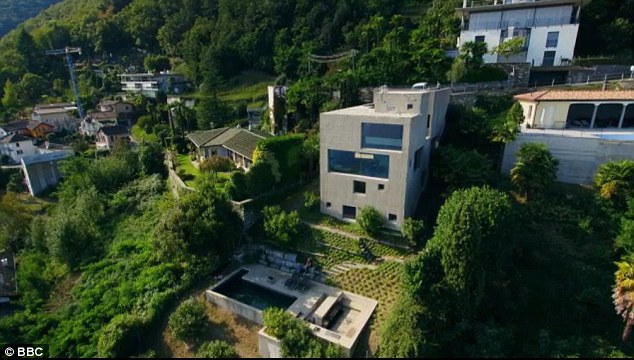 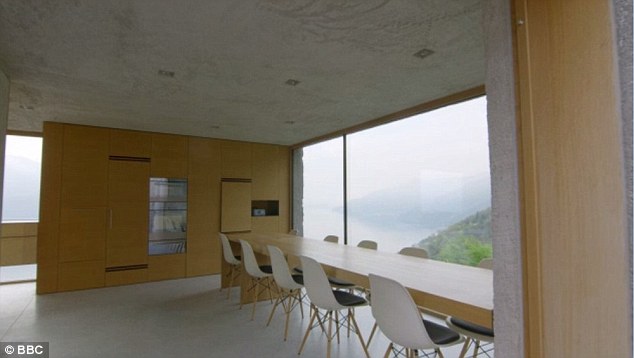 The final house featured in this week’s episode is The Brissago House, a concrete building nestled in the deep south of Switzerland, near the Italian border.

The property slopes down the cliff edge ans so must be entered through the roof where a steep grey staircase beckons visitors inside.

Built around a central courtyard, the property has its own sauna, pool, gym and cinema, as well three bedrooms and an open plan living area.

The building has rough concrete walls but smooth floors made out of a sanded down finish of the material, which reflect the light from the endless windows on the property. 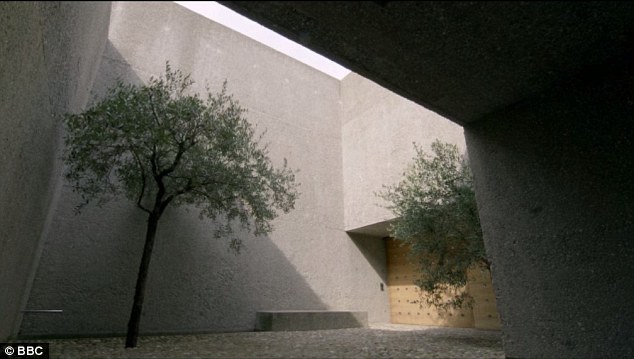 The property is built around a central courtyard, a common feature in Italian architecture 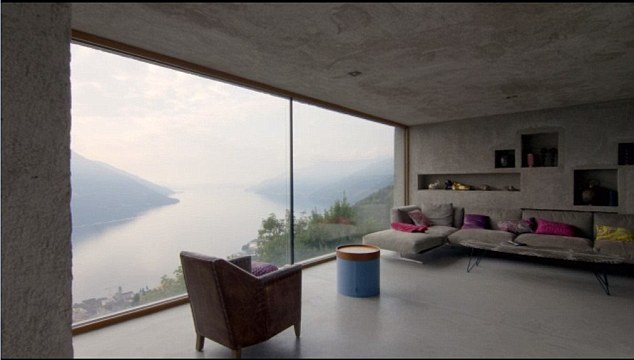 It was designed and built by the Wespi de Meuron Romeo for its occupant Rati and his wife, who told him he could build whatever he wanted as long as there was light.

He said: ‘My wife said ”You can build your concrete house but it has to have a warm texture to it, a warm atmosphere,” so then we decided together with the archtects to put a lot of wood in it the windows to give it a warm feeling.

‘I think this house has some warmth through it.’